With iconic looks & phenomenal handling, the MINI JCW is a street legal go-kart

MINI is one of the most recognisable names in the auto industry most famous for its attractive looks, agile handling, powerful engine and a hefty price tag. The Cooper 3-door hatch has proved itself to be the most ideal MINI of them all with its 3-door silhouette and all the aforementioned characteristics so typical of MINIs. It’s a drivers car, particularly in the Cooper S variant. But MINI believes that there is always some room for improvement and they have launched the John Cooper Works variant of its Cooper hatch. It is the most potent version of the Cooper with a whopping 231 BHP on tap. But can that extra power and that extra price make this the version to buy?

Motor Quest: MINI was founded in 1959 as a means of affordable motoring in Britain. It quickly gained popularity for its small size and relatively small price tag. Over the years, MINI became more than just a car – a part of the British identity. In 2000, the brand was bought by BMW and since then, under the German expertise, MINI has grown into a fashion icon. Around the same time, BMW acquired MINI, Michael Cooper, son of John Cooper, the man responsible for the original MINI Cooper, introduced ‘John Cooper Works’ or JCW. JCW has been responsible for making tuning parts and accessories for BMW-owned MINI. 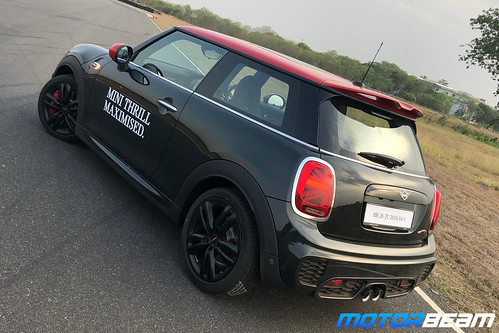 Exteriors – The king of retro designs, the MINI Cooper JCW is strikingly attractive and packs a lot of attitude despite the relatively small footprint. MINIs have become bigger in recent years but have not lost much of their character in the process. The Cooper JCW has that unmistakably MINI silhouette with three doors, large rear glass, squarish A and C pillars and round headlights. The JCW gets an aggressive front bumper with many air dams along with the usual gaping chrome surround grille and an air scoop on the bonnet. Look closely and you’ll also notice the newly designed MINI logos that are now painted. Speaking of logos, there’s a large John Cooper Works badge on the grille. 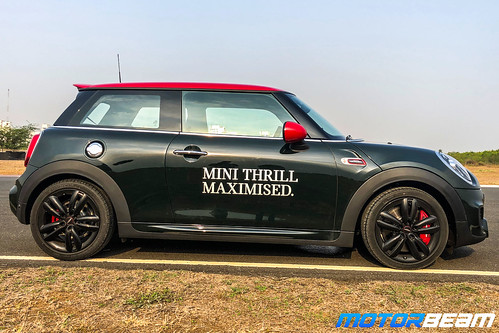 The black wheels with red brake callipers add to the oomph

The side profile carries the boxy yet athletic profile with the stand out elements being the round wing mirrors with a contrasting paint and accentuated wheel arches on the extreme ends of the car. There is the JCW badge on the front fender. The all-black wheels look ace and go well with the green colour we had on our car. The nifty exposed silver finished fuel-cap looks cool too! The rear profile looks a bit stubby but there is no dearth of interesting elements. For instance, we absolutely loved the JCW-specific spoiler on the hatch. The rear bumper, like the front one, is busy looking and adorns two nifty exhaust pipes in between. The incredible detailing in the form of Union Jack pattern on the tail light cluster means you cannot doubt the car’s British origins. Overall, MINI has done a fabulous job of subtly but effectively sprucing up the styling of the JCW variant and looks as tempting as any MINI Cooper ought to.