Italians sure know how to make automobiles, be it on 2 or 4-wheels. In recent times, there has been a massive influx of Italian motorcycle makers in our country which itself goes to prove how seriously the Pasta loving country is taking us. From Benelli, Ducati, MV Agusta, Moto Guzzi to Aprilia, we now have almost all the world-class motorcycle brands on sale. When one talks about Italian bikes, it’s usually the sporty ones that come to our mind but the Aprilia Tuono is an exception, it’s a naked bike with a soul of racer.

Motor Quest: The Aprilia Tuono dates back to 2002 when the bike was first launched. The current motorcycle is in its second generation and got updates in 2014. Tuono means Thunder in Italian. 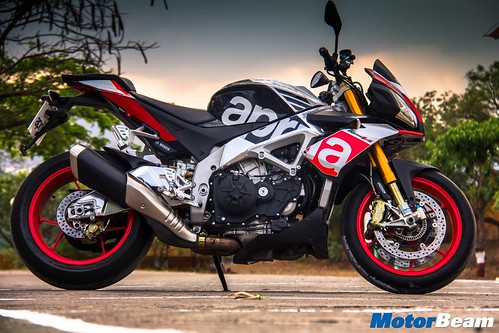 Styling – The Aprilia Tuono is a naked street-fighter motorcycle but gets a half fairing and the headlight gives it the look of a full-faired bike. Up front, the three part headlight looks purposeful with the Italian colours in the middle. There are a lot of badges on the bike, right from APRC to Tuono V4 written proudly at places where you wouldn’t miss them. The exposed V4 engine is so neatly packed that you won’t notice the beast of the motor so easily because there are so many exciting design traits worth focussing on. 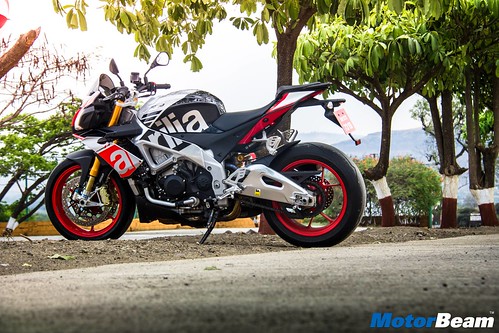 Lots of colours are used but it’s very tastefully done, the Tuono is SEXY

The side profile reveals the interesting mix of colours with the tasteful red wheels, silver coloured body with black graphics and Aprilia written across the tank to the half fairing. The tail section is sharp with bright LED lights and a high set number plate holder that ensures the fat rear tyre is always a visual delight. Riding the bike in Mahabaleshwar led to quite a traffic jam as people stopped and stared at this Italian machine. 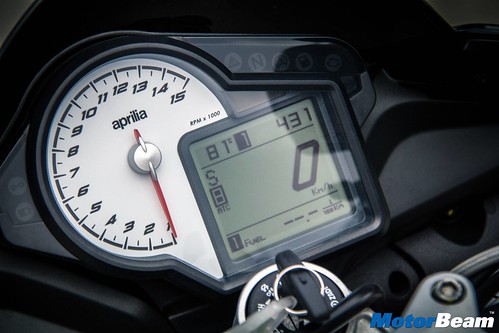 Instrument Cluster and Switchgear – The Aprilia Tuono gets an analogue digital instrument cluster where the tachometer is an analogue unit and takes centre stage. Turn on the ignition and it does a swipe to 15,000 RPM while the display reads the bike’s name. The usual speedometer, odometer, trip meter, gear position indicator and temperature are displayed while the riding mode and traction level are also showcased. There is no fuel meter but a low fuel warning is there. The switchgear is a bit different to use as there are buttons for the riding mode while one can also switch the LCD to race mode which has a lap timer and top speed recorder. There are paddles on the left for engaging launch control and also toggling traction level. The plus paddle is placed near to the horn button and one does use it by mistake. The V4-MP Telemetry let’s one tweak settings via their smartphone and also download data. 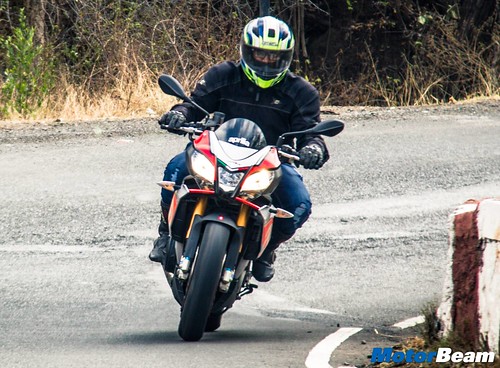 Comfortable ergonomics of the Aprilia Tuono make it a mile muncher

Ergonomics – The Aprilia Tuono is a compact motorcycle and although it has a comfortable seat, it doesn’t have an upright riding position like most would expect from a street-fighter. The riding posture is a bit committed but not awfully so, resulting in long rides being not much of a hassle. In fact, the Tuono’s ergonomics are so good that you won’t feel tired even after a long ride. The windblast too is well contained and this Italian bike does a fine job of maintaining high speeds without tiring you out. The high-set pillion seat is of no use though as it’s too small to accommodate even the skinniest of models. 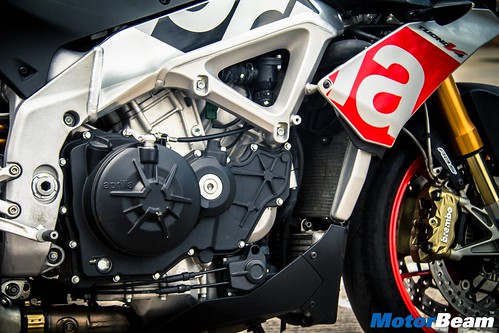 Performance – The real fun begins when you start the bike, it gets to idle with an unrefined growl but things settle in as the engine builds the revs. The 1.1-litre, V4 motor outputs a massive 175 HP and an equally impressive 121 Nm which for a bike of this category, weight and size is a lot of poke. So when you give the Aprilia Tuono some throttle, it picks up pace immediately. In fact there is so much performance from the engine that there is naturally traction control with 8 (EIGHT!!) levels of intervention. And to get it straight, at speeds of 200 km/hr too, with the traction level set to maximum, the front wheel still lifts!! 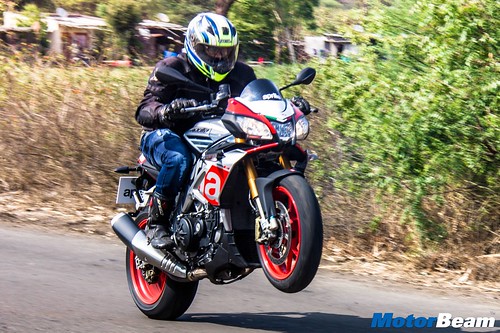 Riding such a big engined bike in the city might seem like a cumbersome ordeal but it’s not. The Aprilia Tuono is at home in the city and although the heat can be felt on the rider’s leg, the compact dimensions make the bike very manoeuvrable. High gears at low speeds, no problem at all as the motor copes up with it easily, no knocking whatsoever. But it’s really the highway where the Tuono feels the best and APRC (Aprilia Performance Ride Control) has three modes – Track, Sport and Race (has minimal engine braking), you read that right, all seem very intimidating and are all full 175 HP! 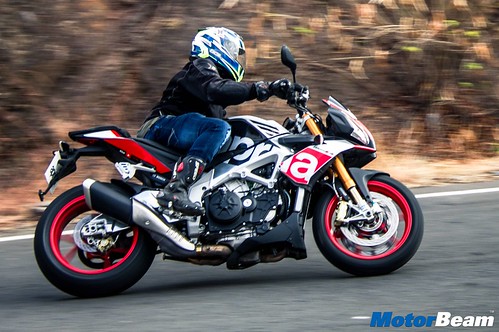 The Aprilia Tuono does 121 km/hr in first gear and whizzes past to the ton in under 3 seconds. It redlines at 12,000 RPM and keeps picking up pace relentlessly even when you are way past the double ton, such is the brute power of this beast. To prevent wheelies, there is wheelie control (AWC) but the front will still lift (in limit of course that you don’t have to dial down the power yourself). By holding both the paddles, the launch control (ALC) gets activated and you can give the bike the full beans without having to worry about pointing the front wheel in the right direction. 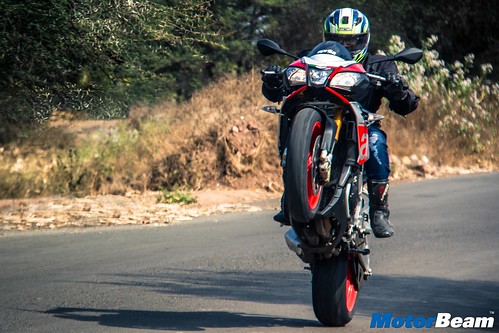 One can also cruise comfortably on the Aprilia Tuono as it is relaxed when you aren’t gunning the throttle, 100 km/hr in top gear reads just 4500 RPM on the tachometer. The motor revs super fast and it pulls the bike like a locomotive train on rails, get past 4000 RPM and you are doing numbers on the meter you can’t really understand. The exhaust note is sweet, more so in the top-end while the slipper clutch and quick-shifter (AQS) assisted gearbox is super slick, no need to close the throttle, just keep it pinned and shift, the bike does the rest for you. 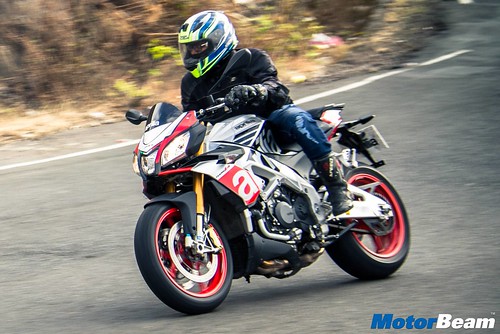 The Aprilia Tuono has top spec hardware with no compromise

Riding Dynamics – The Tuono shares its chassis with the RSV4 and like the flagship Aprilia, it too gets a bucketload of top-drawer hardware. The racing Ohlins suspension employs 43 mm upside-down Titanium Nitride forks up front and a progressive rear monoshock. The bike also gets a steering damper, race ABS and racing brakes from Brembo. The twin-spar aluminium frame is rigid but light while the swingarm is elongated for improved traction. The Pirelli Diablo Supercorsa tyres are super grippy but won’t last long. 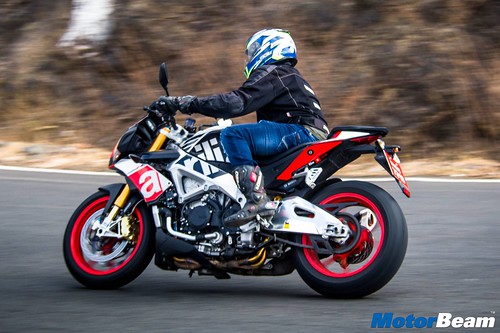 The suspension set-up is just right for Indian roads

The ride, handling, stability and braking balance is just surreal on this Italian

So how is it to ride on the road? The ride quality is perfect, inspite of the stiff set-up, the Aprilia Tuono does tackle bad roads with a lot of ease and doesn’t get ruffled by them. The handling is as sharp as a knife, the Italian bike being supremely precise with excellent feedback even on the tightest of turns. The steering is super communicative and massively responsive, it gives every inch of feedback. The bike leans into corners with ease and remains stable at all times, hard lean or high speeds. The brakes work like anchors to stop the Tuono with amazing confidence. 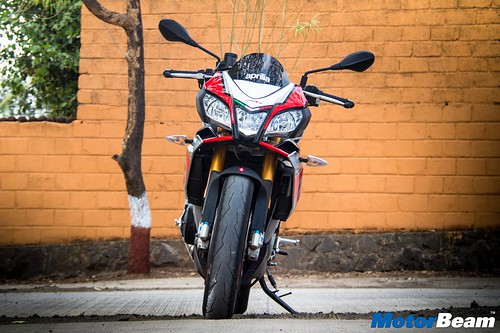 Price aside, there is nothing to fault with this Aprilia motorcycle

Verdict – The Aprilia Tuono is a jack of all trades and also the master of most which is a rarity in such a class of motorcycles. It’s fast, sorry, it’s lightning quick would be more apt to describe its performance. Everything on this motorcycle stands out, be it the styling, electronics, handling, brakes, components and the list can go on and on. Also standing out is the price, which at 21 big ones is indeed an arm and leg for most. But if you have the kind of money, this is the time to #be a racer because the Tuono is as good as it gets. 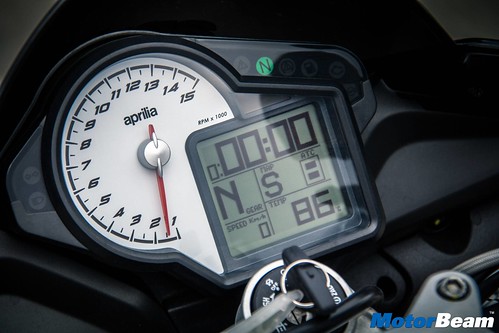 * Ballistic performance which is usable too on the street
* Electronics package can give a technophile a wet dream
* Splendid ride and handling balance makes it feel apt for our roads
* Pure melody from the V4 engine in the top-end
* Comfortable ergonomics which make it touring friendly
* Tameable litre-class bike even for a newbie
* Just freaking look at it, what-a-machine

* Nothing.. but if you insist, price and lack of service centres 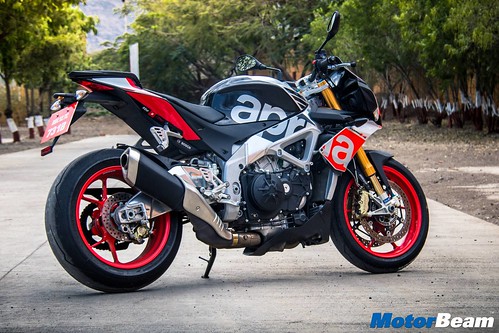 If you have the money, this is the bike to buy without a blink 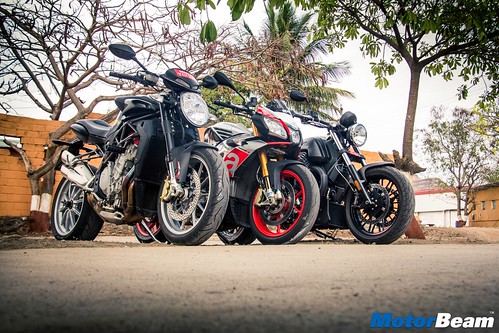 Some Italians for company, the Aprilia Tuono is the best of this pack

“The Aprilia Tuono is proof that being the fastest doesn’t make it the best. This street-fighter naked might not be the quickest bike in the world (of course slower than its mental elder sibling, the RSV4) but the combination of usability and ballistic performance immediately makes you want one. But as always, reality strikes you in the face, the cost of this imported Italian beast is way more than an arm and leg but if you got the money, this is one of the best.” – Faisal Khan, Editor, MotorBeam.
“The Aprilia Tuono is a lethal weapon on two wheels. Best in the naked litre class fight, it’s underpinned by the same chassis as of the RSV4, the Tuono does leave a mark on the rider of how amazing a litre class bike could be. Though it comes under the naked litre class fight, the semi-fairing does make it stand out. Multiple riding modes and the electronics are enough to make a geek crazy. And once a rider gets on, the blasting performance of the V4 gives out a wide smile on the rider’s face.” – Dhanil Vira, Road Tester, MotorBeam.
“The Aprilia Tuono is one of the most sophisticated bikes in terms of electronics in the world market. It took me quite some time to get used to the switchgear and get a hang of the 1100cc engine. It doesn’t look like an aggressive superbike, but mind you, the bike literally takes off after you cross the mid-range while the lift control tries to do its job. It’s one of the most ferocious bikes I’ve ridden and a relatively comfortable one too. Put a full fairing and clip-on handle bars on it and you’ve got yourself a 1100cc (almost) RSV4.” – Adwait Babras, Road Tester, MotorBeam.