The Bajaj Platina 110 is an entry-level 110cc commuter motorcycle

The Bajaj Platina was one of the first motorcycles from Bajaj Auto which was focused for a comfortable ride on Indian road conditions. As Bajaj marketed it for rural as well as urban markets, Nitrox suspension for the rear was the one thing they focused on mostly. But now as the roads are reaching places, the company planned something more with the Platina. Let’s find out if the update has made things interesting for us as well?

Motor Quest: Bajaj launched the Platina back in 2006. Over the years, there have been few updates while the major one included a new 110cc DTSI engine. Bajaj boasted about the Platina’s comfort with a Nitrox rear suspension and the motorcycle got tubeless tyres for less hassle. 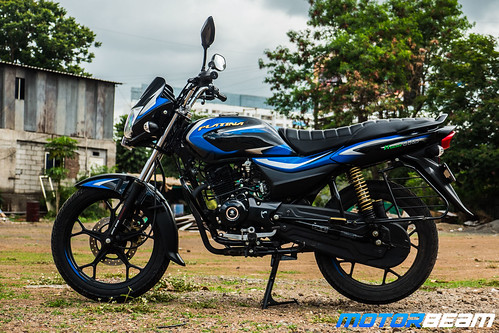 The design is the same, however it gets newer graphics

Styling – On the styling front, the Platina does not have any major updates. Although it gets new colour options and slightly different graphics, a normal person will not able to tell any more differences. However, the Platina logo is now in 3D just like the Pulsar logos. The seat now has a ribbed design and at the front, you could find a disc brake which the Platina never got. The DRL on the top of the headlight is quite bright and although the bike is quite old the design still gets around with the current generation commuter motorcycles. 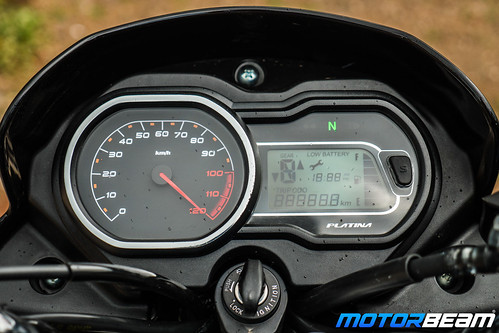 First ever commuter to get a gear-position indicator

Instrument Cluster and Switchgear – Alongside the visual changes, the cluster is also updated. The Platina now gets an analogue-digital unit. The analogue section includes the speedometer which is the same as the regular Platina 110 but now comes with a black background. The digital section, however, gets rest of the details which includes a clock, fuel gauge, trip meter, odometer and a gear position indicator. The gear position indicator does display “H” as it’s 5th gear. The switchgear has been continued from the Platina 110 but as there has been an inclusion of DRLs as the electricals are DC.