Bajaj Auto is a manufacturer which tries to move ahead with new products, by offering better hardware which makes its motorcycles modern and yet value for money. The company can be credited to introducing many segment first features in many of its products in India and leading the charge has been the Pulsar. When the Pulsar 200 NS was launched, it was the debut of the second generation Pulsar but the Naked Sport did not manage to replace the Pulsar 220 as was expected. With the 200 AS, Bajaj Auto not only wants to take the game forward from the 220 but also wants to explore a new category of motorcycles, that of adventure. 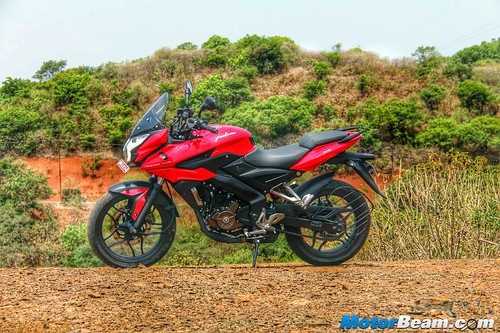 Styling – When the Pulsar 200 NS was launched, its design was immediately appreciated as it was both fresh and appealing, carrying muscular design elements yet not deviating from being a Pulsar as it carried many design elements of the ‘Definitely Male’ bike. But there was something missing in the 200 NS which attracted people to the 220 and that’s the semi-fairing and projector headlight, both of which are present on the Pulsar 200 AS. It also gets a windshield visor for reduced windblast when riding at high speeds. 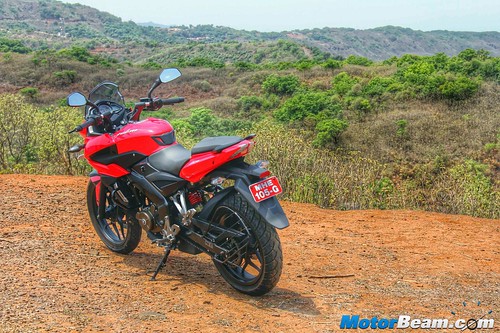 The Pulsar 200 AS is a tall bike and we really like the design a lot. Bajaj Auto has added new colours with graphics on the 200 NS but the 200 AS comes devoid of any graphics, making it the best looking Pulsar for us. The half fairing is well designed although there are some panel gaps present. The motorcycle gets a tank guard and a different rear mudguard which is conventional and thus the tyre hugger is given a miss. The familiar Pulsar LED tail lights are present and the AS 200 sure is a nice looking motorcycle. 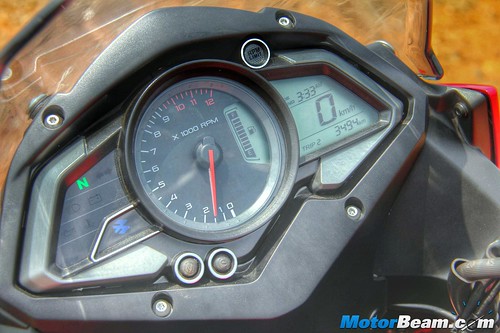 Instrument Cluster and Switchgear – The same three part instrument cluster is carried over on the AS 200 which looks good and is easy to read on the go. Bajaj Auto has used an analogue tachometer which takes centre stage and we appreciate the use of a semi-digital meter as it makes it easy to keep a check on engine revs. The console has all the essential bits and there are various tell-tale lights too including side stand warning and service due indicator. A gear position indicator would be a nice addition to this motorcycle. 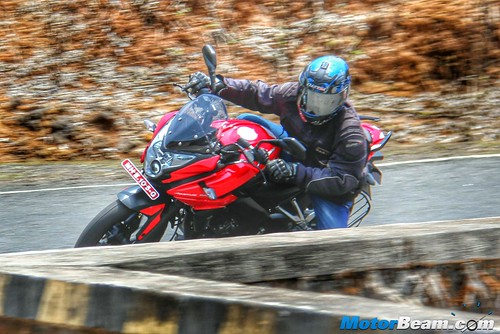 Ergonomics – While one would expect the Pulsar AS 200 to be an off-roader as it carries the Adventure tag, it isn’t going to take to the road less travelled with as much ease as a real Adventure motorcycle would. The ergonomics might suit off-road riding but this is still a road going machine and the AS tag signifies the adventure of touring and not off-roading. Thus the seating position is upright, same as the 200 NS and you pilot clip-on handlebars which solicit no dedication from your end. The seat is comfortable and a pillion is quite welcome too. Cords to hook up luggage would have been a nice touch. 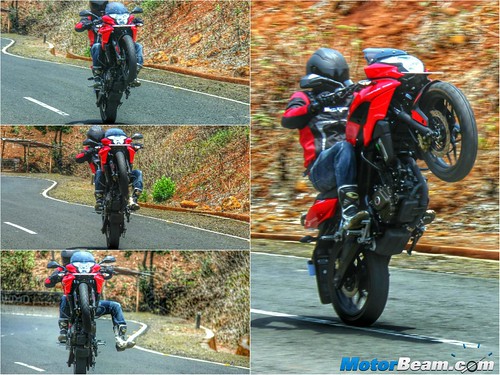 Performance – The Pulsar AS 200 uses the same engine that powers the Pulsar 200 NS, thus the 199.5cc single-cylinder motor continues to churn out 23.5 horses and a twisting force of 18.3 Nm. It uses triple-spark plugs and a carburettor, so while output numbers are identical, what is different is the refinement. The learnings from developing the RS 200 have been passed onto the AS 200 and the bike feels smoother than the 200 NS. Performance is quite similar too and the added weight doesn’t show, with the 0-100 km/hr sprint taking around 10.5 seconds. The top speed is rated at 136 km/hr. 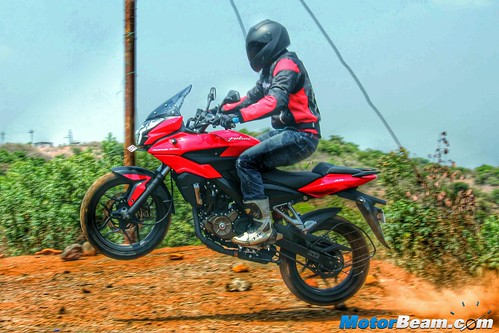 The Pulsar AS 200 isn’t really an adventure bike, it’s not an off-roader

The engine on the Pulsar 200 AS has decent amount of power, making it both quick on the highway yet at home in the city, ride-ability in town being very good. Power is delivered in a linear manner and there is good response throughout, the mid-range being punchy while top-end performance is entertaining too, save for the vibrations that filter through the handlebar and pegs. With more kms on the odometer and a shift to fully synthetic oil, the Pulsar AS 200 will be calmer and NVH levels will be much improved too. 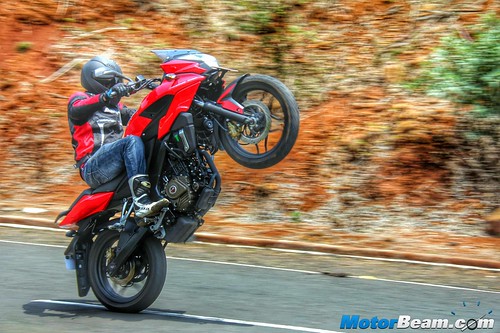 Compared to the 200 NS, the AS 200 feels more refined but vibes are there

The motor redlines at 11,000 RPM and it’s past 7000 RPM that the Pulsar AS 200 starts becoming vocal, sounding a bit too loud just before the rev limiter kicks in. The liquid-cooled mill is refined at lower engine speeds and the smooth shifting gearbox makes it a pleasure to toggle through the 6-speed transmission. This motorcycle has enough pep to hit triple digit speeds in a flash while also being able to cruise at the ton with relative ease. Fuel efficiency is good as the bike will return something between 35-40 km/l, which is frugal for the engine size and performance on offer. One gripe being the position of the choke switch as this being a carb bike, does need the choke quite often. 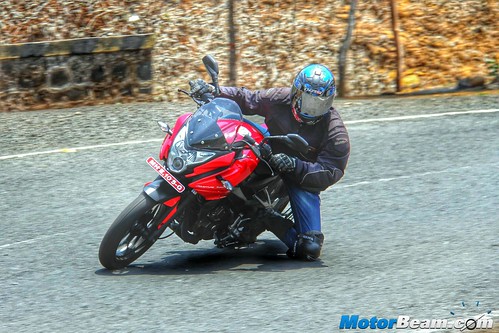 A good handler only ruined by the lacklustre EuroGrip tyres

Riding Dynamics – Bajaj Auto hasn’t played around the suspension of the AS 200 and it has a similar tune as the 200 NS, thus the bike is set-up on the stiffer side, which coupled with the perimeter frame makes it a joy to ride around the twisties. However, there is a big chink in the AS 200’s armour and that’s the TVS sourced EuroGrip tyres which lack grip and don’t inspire one to push hard. Due to the seat height, the bike is more suited to tall riders and short riders will take some time getting used to it. 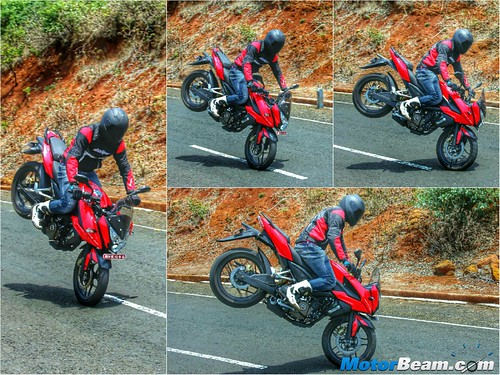 Braking performance is strong while ride quality is compliant

Although a good handler, the company has still managed to give the Pulsar 200 AS a good ride quality. The balance between engaging handling and absorbent suspension has been nicely met, resulting in the AS 200 being at home even on bad roads. This quality of the Pulsar AS 200 will make it a good touring machine as it’s stable at high speeds and windblast is much reduced over the 200 NS. The brakes have been carried over from the 200 NS as well and offer good stopping power but the hard tyres don’t help matters when you pull out the anchors. Better MRF tyres are coming to this Pulsar by the end of the year. 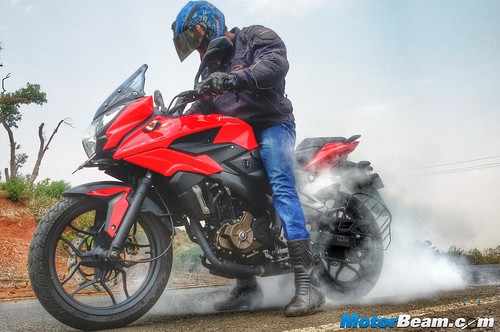 Verdict – The Pulsar AS 200 isn’t much of a new thing, it’s the same 200 NS but with the addition of features that makes it more desirable. It’s not an euduro motorcycle but slowly and surely Bajaj will enter that segment, with the Pulsar. The 200 AS is then a 200 NS with the highlight features of the 220, making it a fitting replacement to the once fastest Pulsar. With Bajaj pricing the 200 AS awfully close to the 200 NS, the flagship carb Pulsar makes for an excellent motorcycle for those looking for a value for money machine that is also quick, agile and feature loaded.

The Pulsar AS 200 offers even more value than the 200 NS. While it has good performance and handling, it now comes with the goodies which will make people switch to the new generation Pulsar over the highly popular 220. 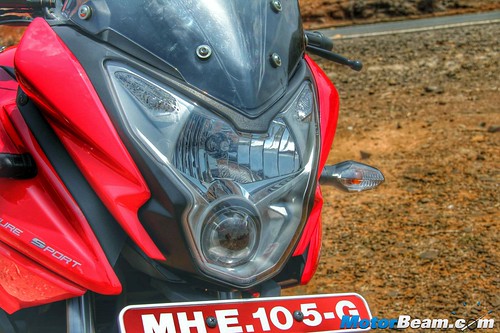 * Small additions that make for some improvement to the Pulsar 200
* Engaging handling yet ride quality is good even on our roads
* VFM proposition is unbeatable, Bajaj continues to bring performance biking to the masses

* Not really an adventure bike, changes are strictly cosmetic
* TVS EuroGrip tyres are hard compound, don’t offer the grip that the AS 200 needs 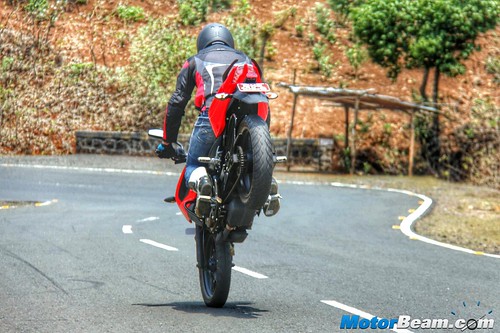 Renault wants to go all guns blazing in the Indian market by creating new segments. Renault launched the Triber in 2019 and this 7-seater   END_OF_DOCUMENT_TOKEN_TO_BE_REPLACED