The middle-weight motorcycle segment is the most suited for India as bikes in this class pack in the right amount of power for our roads, enough that will keep you happy while still not as much that you won’t need it. The options in this segment were limited but in the past few months, more bikes have been launched to the delight of motorcyclists. If you want to upgrade to your first big bike and yet don’t want to break the bank, there are two options which come to mind instantly, the Kawasaki ER-6n and the Benelli TNT 600i. Both are meaty street-fighters which are priced aggressively but between them, which one should you ride home?

Motor Quest: Kawasaki launched the ER-6n in India late last year while Benelli is the latest entrant, launching its TNT 600i just last month. Both bikes fall in the 600-650cc category and make for a fine purchase. 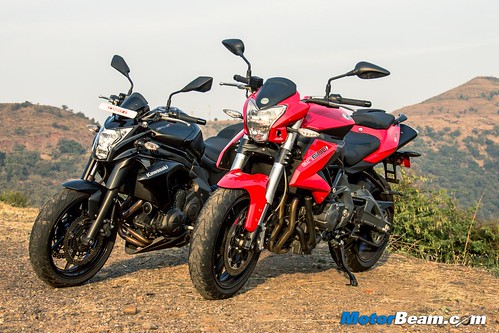 Styling – The Benelli TNT 600i is bigger than the Kawasaki ER-6n in every dimension and that shows as the Italian bike has more presence. The generous size of the 600i also means it runs on much bigger tyres, thus it has a superbike sized 180 section rear (the ER-6n makes do with a 160 mm tyre), although both bikes use the same sized front tyre. The headlight on both bikes is a bit plain for our liking and if the ER-6n carried the Z genes in it, it would certainly go one up on the Benelli in the styling department but it doesn’t! 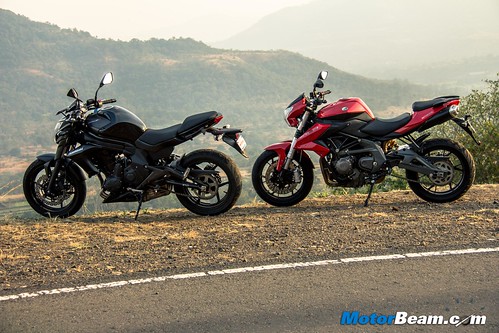 The Kawasaki ER-6n isn’t as exciting to look at, the elements on the TNT are nice

Working in the Benelli’s favour are the sharper elements and richer hardware, the TNT 600i using LED indicators, under-seat twin exhausts and chunkier panels. The ER-6n isn’t bad looking at all but somehow doesn’t have the Italian design flair, it comes across as conservative. Benelli also offers more colour options on the 600i including red and white while the Kwacker is only available in black. Overall, when we parked both bikes side by side, we saw more people take notice of the Benelli and it is no doubt the better looking bike here.

Both bikes have the tachometer taking centre stage which is very nice, a digital display accompanies on the side

Instrument Cluster and Switchgear – Both bikes come with an analogue-digital instrument cluster and the unit on the Kawasaki looks fresher of the two, it’s also easier to read thanks to clearer fonts. The ER-6n also gets more information on board like a second trip meter (shockingly absent on the TNT 600i) and a range indicator. Both bikes get a hazard lights switch, adjustable brake lever and both have the headlight on as default to function as daytime running lights. Neither bikes get gear position indicator and the switchgear quality on the Kawasaki feels slightly better. 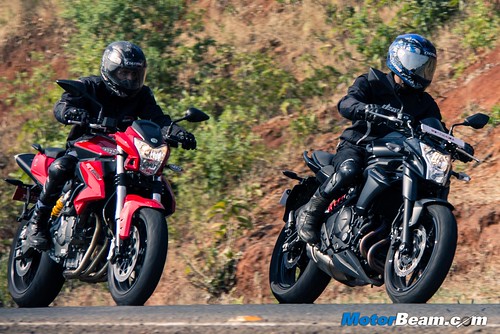 Ergonomics – These are naked street-fighters and thus both these motorcycles have a similar upright riding position where you pilot a wide single-piece handlebar. There is a bit of lean forward but not much and that gives some sporty feel to the ergos of these middle-weights. That said, the pillion seat is accommodating too but overall it’s the Kawasaki which has the better seat cushioning. It’s also easier to mount luggage on the Japanese machine so if touring is your thing, then the ER-6n has a slight edge. 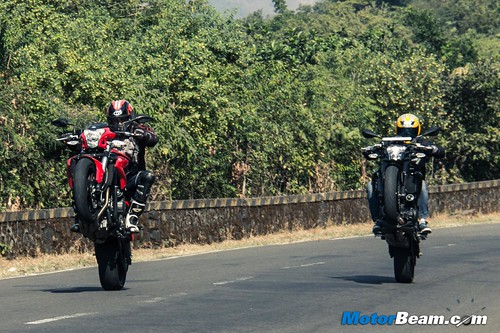 Performance – There is where things start to become interesting as these bikes have little in common when it comes to engine configuration. While the Kawasaki is powered by a twin-cylinder engine, the Benelli has double the cylinders under its belly with an in-line 4. Thus the higher displacement ER-6n isn’t a match for the TNT 600i when it comes to power, the 649cc mill in the Kwacker generating 72 PS of power and 64 Nm of torque while the Benelli’s 600cc unit belts out 86 PS and 54.6 Nm. On paper, the TNT 600i appears more powerful and out on the road, it indeed is the more powerful machine, beating the ER-6n to the 0-100 km/hr run by almost half a second. 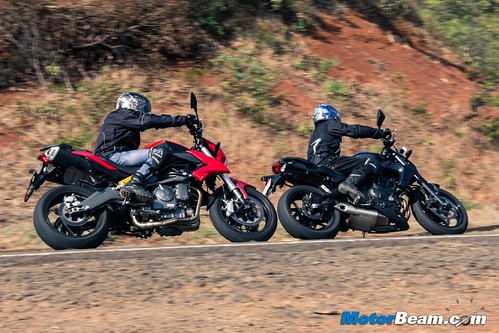 However outright acceleration is just one thing, when you look at the RPM at which peak power and torque is produced, you get a fair idea about these engines. While the Kawasaki’s peak output comes in early at 8500 RPM for power and 7000 RPM for torque, the Benelli wakes up a little later, peaking in at 11,500 RPM for power and 10,500 for torque. Naturally, it’s the Kawasaki which has more low-end poke while the Benelli really excels in the top-end, one does have to rev the TNT hard to extract the best from the mill. The ER-6n has performance everywhere, be it low, mid or top-end and that makes it so flexible to ride in different situations. Still, it’s the mid-range which is the best on the Kawasaki which gives it good urgency in both the city and on the highway. 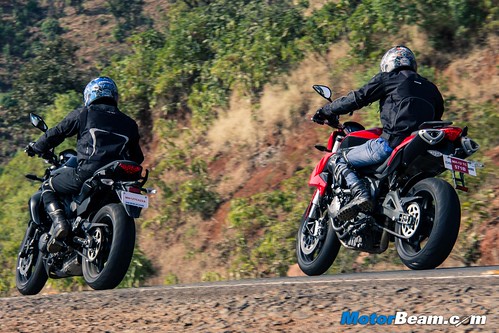 The ER-6n sounds nice but the Benelli sounds even nicer, much nicer

Both bikes redline at 11,000 RPM and that shows the age of their powertrains. The ER-6n’s mill has been around for almost a decade now while the one on the Benelli is even older, coming from the pre-2005 Yamaha R6. Sadly though, the TNT 600i is no match for the Kawasaki when it comes to fuelling as there is some snatchiness felt at the low-end while the ER-6n has splendid fuelling which makes it such a joy to ride at all RPMs. Both motorcycles have linear power delivery and while the ER-6n makes an amazing sound from its underbelly exhaust, it simply can’t match the symphony created by the 4-pot mill in the Benelli which is not only louder but also so much more bassy. 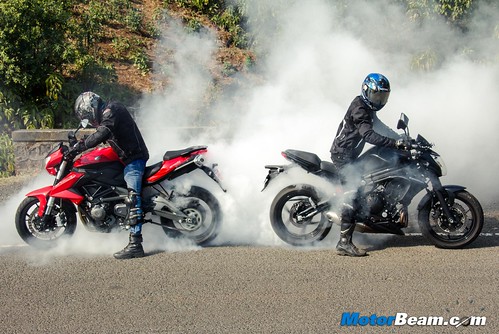 Both these motorcycles will happily whizz past 200 km/hr when you duck down and open the throttle hard and long but the Benelli will go slightly further with a 10 km/hr higher top speed. The Kawasaki has the better clutch feel and also the better gearbox which has crispier shifts. The ER-6n also excels over the TNT 600i when it comes to heat management but both these middle-weight machines are very refined, the Benelli more so. With a 1-litre bigger fuel tank and slightly higher mileage, the Kawasaki wins the tank range wars and given that you will need to exploit the top-end more in the Benelli, the ER-6n easily is the more frugal bike of the two, returning 2 km/l more per litre (average fuel economy of 22 km/l). 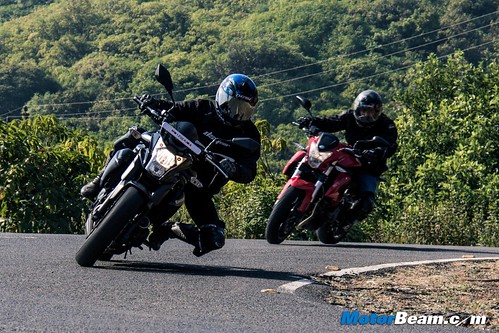 The Kawasaki has the better ride quality of the two, it’s also more nimble

Riding Dynamics – As mentioned earlier in this review, both these bikes are old which means they are heavy. The ER-6n tips the scales at 204 kgs which is heavy considering a 1300cc, KTM Super Duke R is lighter than this Kawasaki. But the Benelli is even heavier, it weighs a massive 231 kgs! The TNT 600i is underpinned by a steel trestle frame which is nothing but a trellis frame borrowed from the Aprilia Shiver 750 (a bike which could be launched in India soon) while the ER-6n uses a perimeter frame. The Kawasaki uses conventional telescopic forks while the Benelli has fat 50 mm upside down forks. 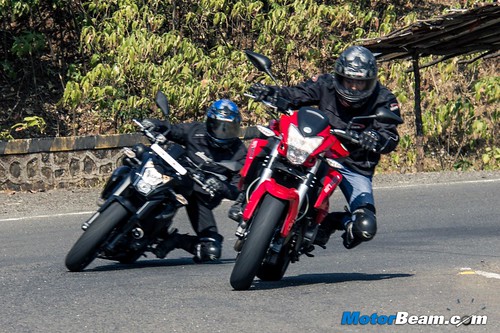 Due to the heavier weight, the 600i isn’t as eager to turn-in although there is ample grip

Out on the road and specially the twisties, the ER-6n offers better handling, largely thanks to its lower weight which makes it more agile around corners and also more nimble to manoeuvre in the city. The Benelli is a good handler too but needs effort to turn in and isn’t as fluid as the Kwacker. However, the extra weight and longer wheelbase do aid in high speed stability, keeping the TNT 600i more glued to the road than the ER-6n. Ride quality is better on the Kawasaki too, it feels more composed over bad roads. The wider tyres on the TNT 600i are not only better because of their size but also have better grip as the Pirelli Angels are one up on the Dunlops found on the Kawasaki. Neither bikes come with ABS which is a shame and among the two, the Benelli offers better stopping power. 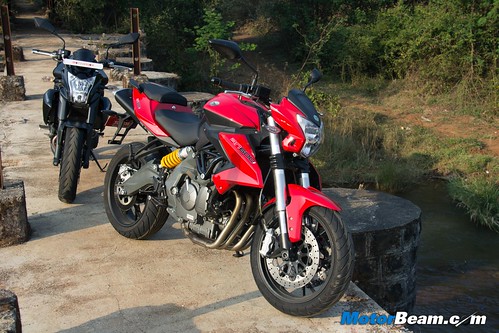 Verdict – It’s quite clear here, the Kawasaki ER-6n is the superior bike here (MotorBeam readers know that and hence 64% picked the ER-6n over the TNT 600i in our poll), being more practical to ride everyday while also having better ride and handling. It’s also a good Rs. 46,000/- cheaper. However, the Kwacker doesn’t evoke the same emotions as the Benelli which feels more connected to you. The TNT 600i isn’t as polished as the ER-6n but for the extra money you pay, you get a better looking bike which is faster and also sounds so much sweeter. The 4-cylinder advantage plays in this Benelli’s favour, making it our winner in this shootout.

The Kawasaki ER-6n is an easier bike to ride and is also well accomplished on the dynamics front. However, the Benelli TNT 600i has a soul and that’s reason enough to buy it over the Kwacker. 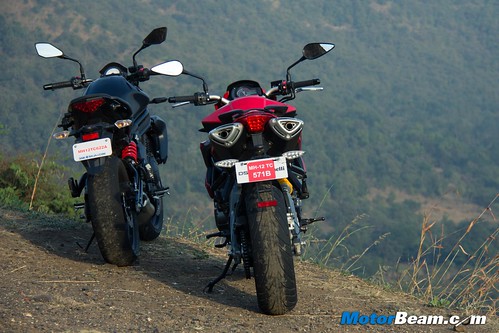 The Benelli TNT 600i is by far the cheapest 4-cylinder bike in India, huge USP