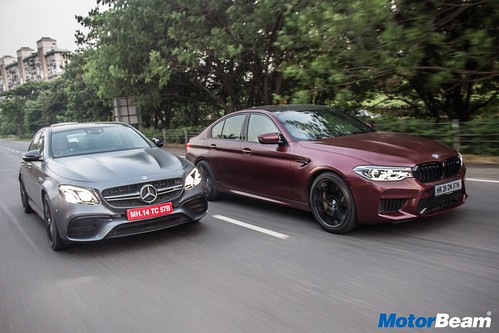 Performance – Now we are talking, both cars are so similar yet so different because both employ V8 engines with twin-turbos, channeling power to all four wheels as both employ 4-wheel drive now to put those 600 odd horses to good use. The Mercedes has an outright advantage here because we are comparing the E63S with the M5 (not the M5 Competition which is more apt to take on the S variant of the E63). Thus, the M5’s 4.4-litre unit might be on par when it comes to power but is down on torque by 100 Nm. 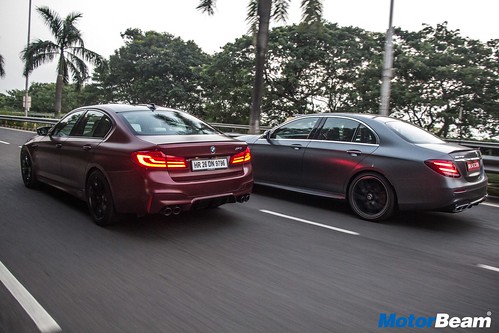 The M5 does not have the turbo lag of the E63s

The M5’s torque disadvantage is nullified by the weight saving done by BMW as the M5 is 135 kgs lighter thanks to the use of CFRP. Thus, both cars zip from naught to 100 in just 3.4 seconds, they have an identical top speed too at 250 km/hr (limited) which can be opened up to 300 km/hr by opting for a package. But that’s where the similarities end as the 4.0-litre AMG unit has an entirely different character when compared to the BMW. 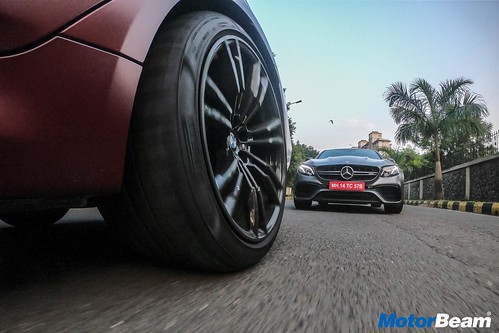 The E63S is louder than the BMW M5

The M5 feels more alive right from get go, lag, what is that? There is none of that wait for the turbo to spool up nonsense here, just get on the gas and bang, the BMW is right in action. Power delivery is linear, it’s immediate, it doesn’t feel force fed and revs at lightning speed to reach the redline. The Mercedes, on the other hand, has to wait for the turbo to sing its song and thus doesn’t feel as responsive lower down but impresses by shoving the driver back in the seat with a punchy mid-range. 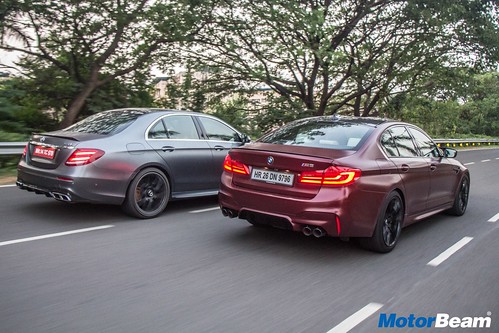 The E63S gets a faster and more responsive gearbox

The M5 has the better low-end pull, the E63 has the better mid-range punch and both cars just roar to the redline of close to 7000 RPM. Both are extremely refined when you don’t floor the pedal to the metal but once you go hard on the A pedal, both make quite a racket, the E63 is louder while the M5 has better cracks and pops, the BMW just sounds better when upshifting or downshifting. 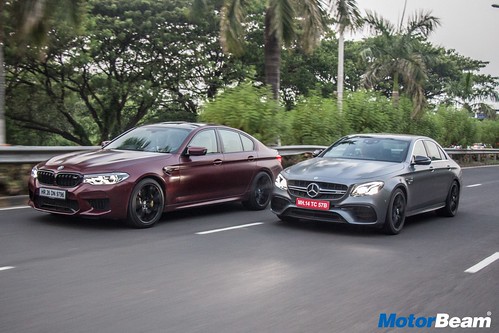 Both cars allow you to take manual control of the gears

The BMW feels more civilised throughout the rev-range when compared to the Mercedes which feels more muscle car like in the way it sounds and moves. Both cars get a slew of driving modes, the M5 is just so much easier to work with thanks to the easier menu and steering mounted buttons to select modes. The 9-speed MCT gearbox in the E63 offers faster shifts than the 8-speed torque converter in the M5, both give you the option of changing cogs using either the gear lever or the steering mounted paddles. There isn’t much to choose between the efficiency of these cars, both love to guzzle fuel at the rate of 4 kms to the litre but the M5’s tank is bigger by 4-litres.

Royal Enfield is on a product offensive for next 3-4 years. New Royal Enfield model to launch every quarter. Yes you heard that right. The   END_OF_DOCUMENT_TOKEN_TO_BE_REPLACED