The driving dynamics of the Ford Classic immediately put a smile on your face.

The Ford Classic is the latest to join our long term fleet. Although not a new car, the Classic still has a lot going for it. Launched as the Fiesta and re-named to Classic after the arrival of the latest gen Fiesta on our shores, the Classic has been repositioned to take on the lower C-segment. It’s not a car which will draw attention but it manages to woo you over with its wide array of capabilities. We have put on some miles on the Ford Classic diesel, with the vehicle playing the role of a support car quite often.

When Ford launched the sixth generation Fiesta, it renamed the last generation Fiesta as the Fiesta Classic, giving it a minor facelift in the process. The facelift was really minor and thus there isn’t much to talk about the design attributes of the vehicle. Sure it’s started to look a bit dated, after all it’s been on our roads in similar form since 2005. However look away from the design aspect and you will appreciate the dynamic abilities of the Classic. 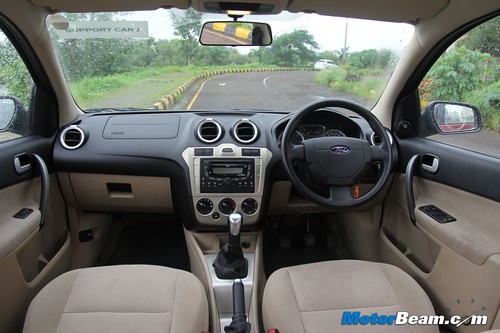 Step inside and you are greeted with a cabin which feels very solidly put together. Yes, plastic quality is not up to the mark and some interior parts tend to rattle quite a bit on bad roads. However the seats are very comfortable and there is good headroom too. Rear seat has poor under thigh support and the beige seats get dirty very quickly. There is no seat back pocket on the driver’s seat but the door pockets are well sized. The audio system offers good sound output and has Bluetooth connectivity, which is a real pain to connect (we simply can’t find how to delete a paired device as it won’t let us pair more than a certain number of phones). Lack of audio controls on the steering wheel even on the top-end variant is a surprising omission. The boot is big and the spare wheel uses a steel rim and not a alloy. 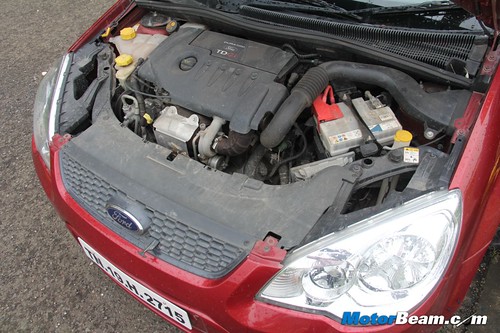 Our test car is equipped with Ford’s 1.4-litre diesel engine which churns out just 68 PS of power (at 4000 RPM) and 160 Nm of torque at 2000 RPM. Don’t go by the low power figures as the Classic’s motor is terrifically refined and is the apt engine for city duties. There is absolutely no vibrations from this Duratorq powerplant, which remains silent at idle and is only heard when you rev it hard. Turbolag is negligible and the Classic pulls right from the word go, offering excellent city drivability. 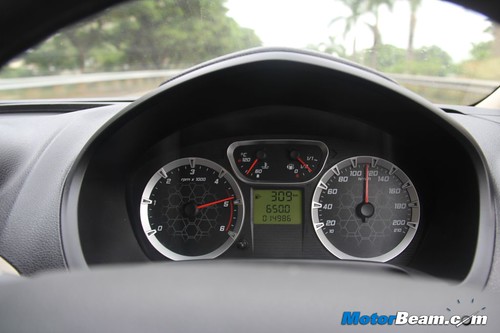 Even on the highways, the Ford Classic has decent pep till around 120 km/hr, post which progress becomes slow. You do need to work the gearbox to make quick overtakes. The transmission offers smooth shifts and the gearing is on the taller side. While engine noise is at a minimum at speed, the road and tyre noise is quite audible. What is really pleasing about the diesel Ford Classic is the mileage, we are getting a constant 15 km/l plus in the city and if driven with a sedate foot, there is no reason why the Classic can’t average better numbers. The only issue is calculating the mileage as the Classic has only one trip meter which we usually use to calculate our daily distance.

Where the Ford Classic really pleases is the dynamics. The balance between ride and handling is simply fantastic, something very few cars can boast of. The Classic’s suspension is so well tuned for our roads, it simply glides over the worst of tarmac (and there are plenty of them) without disturbing occupants. Low speed or high speed, the Classic transmits very little. Even stability at high speed is superb and the car stays glued to the road at all times. What is even better is the handling of the vehicle. When we were shooting the KTM Duke 390 at Aamby Valley recently, we were following the bike in the Classic. The well weighed chassis meant we could keep up with the razor sharp Duke around corners (obviously the Duke fled past on the straights). The handling is so good that even our camera crew applauded the car for its lack of body roll. The Classic is one car that not only inspires confidence in the driver but even in the co-passenger. The hydraulic steering is a bit heavy at low speeds but is a complete joy when you push the machine around the tightest of corners.

Our current stint with the Ford Classic has been with some ups and some downs. The rattling and complicated audio system’s Bluetooth pairing are issues which are apparent but once you get behind the wheel, everything changes completely. The Classic is no doubt one of the most involving cars to drive in its segment and the icing on the cake is the comfort it offers to the passengers. Priced between Rs. 6.84 to Rs. 9.65 lakhs (on-road, Mumbai), the Classic makes as much sense to the head, as it does to the heart.