Comparing the Volkswagen Polo and Ford Figo makes little sense as both cars are very different, or are they? While most would place the Polo as a better car, the reality is far from it. Volkswagen has positioned the Polo as a premium hatchback and since the vehicle is similar to the one sold globally, it retains that premium tag. The Ford Figo on the other hand is positioned as a hatchback for the masses. It has been specially developed for the Indian market and is doing wonders for the American automaker. So why do we pitch them against each other? 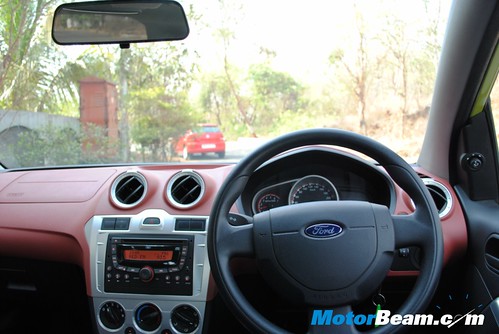 For starters, both the Ford Figo and Volkswagen Polo are very similar in their driving dynamics. Both these cars offer a very good blend of ride, handling and braking. The Ford Figo offers much more interior room, whereas the Volkswagen Polo feels very cramped (surprising for a German car). The Figo has a marginally bigger boot than the Polo, which is bigger by 4-liters. However the interiors of the Polo are designed much better and are superior in quality too. Everything feels so much better put together on the Polo, right from the light controls of the indicators to the steering wheel. 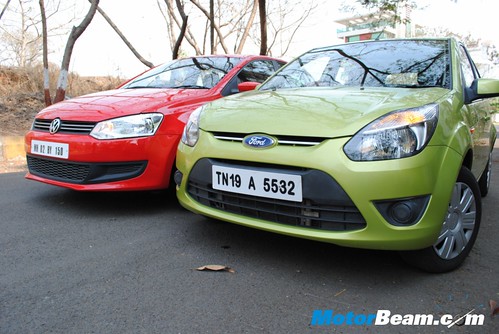 Even on the outside, the Volkswagen Polo is a more striking car than the Ford Figo. The design of the Polo is modern and in-line with the styling of all other Volkswagen vehicles. The Figo feels a bit dated though but offers more equipment. The top of the line Figo offers Bluetooth audio system and telephone controls which are missing on the Polo Highline. The Figo lacks rear power windows and neither cars offer automatic climate control. 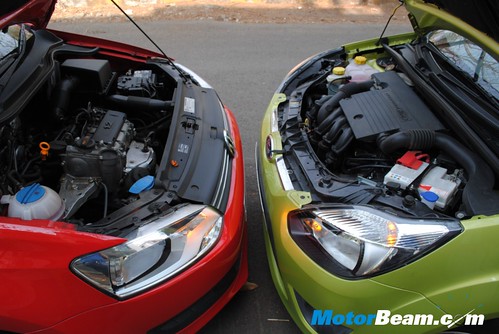 On the engine aspect, Volkswagen could have offered better engines on the Polo. The 3-pot unit on the petrol Polo is better than the petrol Figo, in terms of performance and mileage. Ford needs to drop the EcoBoost engine into the Figo’s engine bay to increase petrol Figo sales. The 3-cylinder diesel engine in the Polo suffers from high vibrations and has refinement issues. It doesn’t feel like a Rs. 8 lakh car. The Ford Figo’s 1.4-litre TDCi engine is butter smooth and has excellent performance and refinement. It is clearly better than the Polo’s TDI unit in almost all aspects. Both diesel cars will return similar mileage of around 15 km/l in the city. The petrol Polo will deliver 2 km/l more than the petrol Figo. 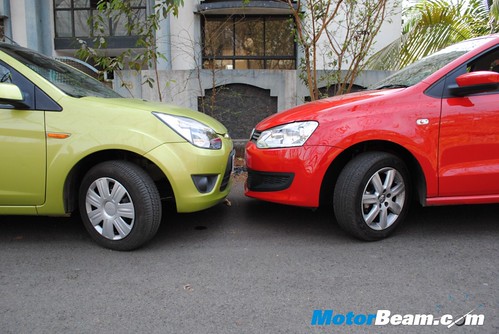 So, which is a better car? That is something which the pricing will decide. The base variant of the Volkswagen Polo (petrol Trendline) costs Rs. 5.45 lakhs, while the base Ford Figo (petrol LXi) is priced at Rs. 4.56 lakhs. This price difference of almost Rs. 90,000/- continues on all variants between these cars and as you start comparing the diesel variants, the price gap only extends further. The top variant of the Polo (diesel Highline) is priced at Rs. 8.73 lakhs, while the top end Figo (diesel Titanium) costs Rs. 7.20 lakhs (all prices on-road, Mumbai). This make the Figo a better choice for most car buyers. 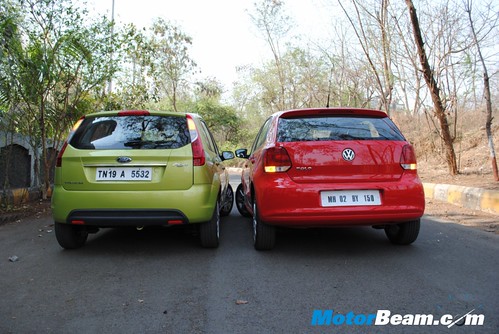