With the 223cc engine from the Karizma, the Impulse is now much more fun to ride

Just about 4 years down the line, Hero MotoCorp brought in a new class of motorcycle, a transroader, the Hero Impulse, a re-badged Honda NXR Bros (which is sold in Brazil) powered by a 150cc mill. The critics and reviews did say that the bike happened to be practical but lost out on the power front. Nevertheless, we are in India and Fortpoint Racing thought of coming up with a solution for this. They took the 223cc engine from the elder sibling, the Hero Karizma and put it into the Impulse. This thing happened to be an awesome solution for the missing power. We rode this bike for a good duration, played around in Mumbai city traffic and even on the highways while we enjoyed taking it off-road as well.

Motor Quest: The Hero Impulse is the first Indian transroader bike was launched in the year 2011. It’s powered by a 150cc Honda engine but production was stopped due to poor demand. It’s a re-badged Honda NXR Bros, a motorcycle sold in Brazil. 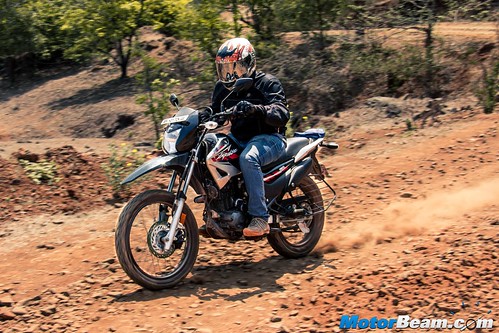 Styling – The 223cc Hero Impulse happens to be exactly the same in appearance. There are no mods or changes in the styling except the engine looks more beefy. The long travel front suspension, high raised front mudguard, small headlamp, thin tank and the really long seat climbing up to the tank which goes till the rear LED tail lamp. All the styling bits remain exactly the same, except the exhaust and a shorter rear tail. The performance exhaust is custom made and is a total look-a-like of an MX exhaust. The rear mudguard had a tail-tidy done and this did compliment the tyre giving it a really good look.

Instrument Cluster and Switchgear – There is no drastic change here as it is the same semi-digital instrument cluster which happens to do duty on the regular Hero Impulse as well. The tachometer redlines at 10,000 RPM while the amber backlight digital console displays the speed, the odo reading with two trip meters and also a service due indicator message. The switchgear (there is no engine kill switch) and their quality remains the same, the bike isn’t a new bike, it’s the same Hero Impulse with a new engine snapped onto it so the bits stay the same. 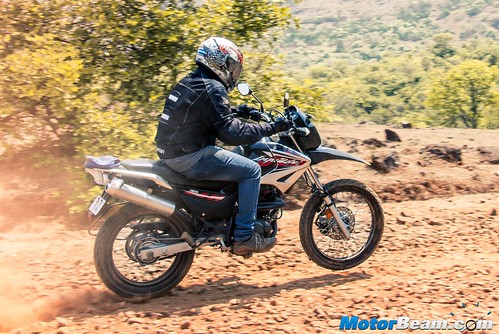 Riding position is upright, but won’t suit short riders due to the high seat

Ergonomics – The Hero Impulse has a huge ground clearance and resulting which the seat height is also quite high. The bike has an upright seating position with the footpegs being just a tad bit forward. The seat is long, like way too long and goes above the tank while it does provide comfort, the seats being thin do not provide much thigh support yet there’s no issue either. Pillion comfort is just amazing, the overall seating and comfort makes the Hero Impulse best for both solo and pillion riding. 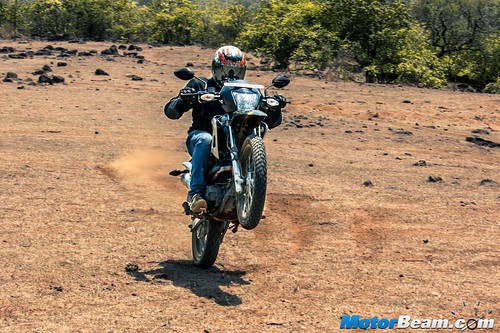 The Hero Impulse doesn’t hesitate to pop a wheelie, even on the worst kind of roads

Performance – The Hero Impulse with the original 150cc powerplant from Honda gave out just 13 BHP of power and 13 Nm of torque. The 223cc unit churns out 19 BHP of power with about 19.2 Nm of torque! With just a minute increase in engine weight and a whooping 6 Nm torque jump, this makes the Impulse much more quicker in acceleration. The mid-range power is insane as the bike just pulls, while the 223cc engine does heat up quite quickly. The power delivery happens to be linear throughout but the throttle response happens to be more immediate. The vibes from the engine do take the case of the rider as they build-up to a huge extent as and how the revs increase. The NVH levels happen to be on a harsher side but the practicality with a huge bump in power kept the fun going on. 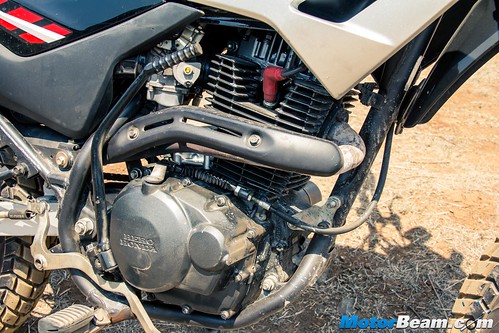 Performance is linear throughout, while the mid-range is the best part of this engine

The 223cc snap-on has actually made the bike way too much fun, better damping needed

The gearbox is the same from the Hero Karizma and that’s where the bike loses out on, notchy and not that great response of the gearbox steals some bits of fun. Bike accelerates very well as it runs on the same sprocket ratio of the stock Impulse, the 17-50 teeth, hence it does a cruising speed of 100 km/hr at around 7000 RPM in 5th gear. The bike is quick, does 0-60 km/hr in 4.5 seconds and after which the windblast, knobby tyres and seating position pull a drag, taking more time to reach the ton. The 223cc Hero Impulse did 0-100 km/hr in 15.46 seconds (as per our VBOX tests) and maxed out at 117 km/hr. The bike has a performance exhaust and it is loud enough as the revs build up. The sound is quite good too and attention seeking, we didn’t use the bike’s horn even once. The exhaust misses out on a heat cover, otherwise it would have been perfect. The Karizma engined Impulse did give us a mileage of around 35 km/l and this figure for a 223cc engine is really good considering we rode quite aggressively. 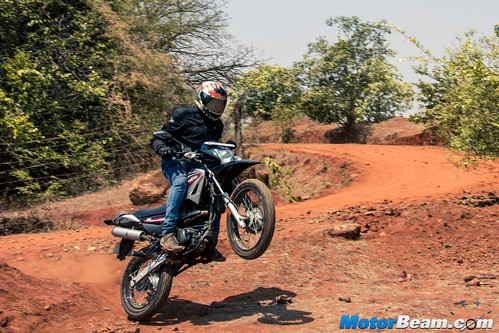 Off-road fun or on-road comfort, the Hero Impulse is a take-it-anywhere motorcycle

Riding Dynamics – As the bike has practical ergos, the seat height is the only concern otherwise riding the Hero Impulse 223 is a lot of fun. The motorcycle has an able chassis which is firm while providing stability. The increase in power did make the handling lose out a bit more. Not considering the off-road riding dynamics, on-road riding was a bit more of a concern. Riding over the bumps and pot-holes is plush, but going through corners or pinning through traffic and braking hard, needs a bit more effort due to the added punch. On the tarmac, the knobby tyres did grip well but provided a lot of drag all the time. Whooping increase in performance yet braking was just left to stock, a rear disc would have been nice. 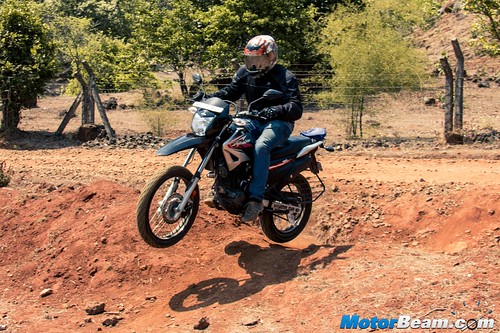 On-road, the power packed Hero Impulse is good, but once off the road, the bike became great or one can say insanely amazing. The performance of the engine, knobby tyres and the suspension setup, the bike rides like a gem off the tarmac. Going through the off-road path, gunning the throttle while in corners and on the exits, the Impulse glided and did lift the front wheel lots of times. Intentionally and unintentionally even on mud, gravels and stones, the power gave in a lot of wheelspin but with gradual grip. The CEAT rubber is just amazing, even after lot of off-road taming, the tyre would grip and kept the bike in motion what-so-ever. With the 223cc engine, the Hero Impulse took off-road really well and riding through it was superb, as it didn’t allow us to break a sweat. 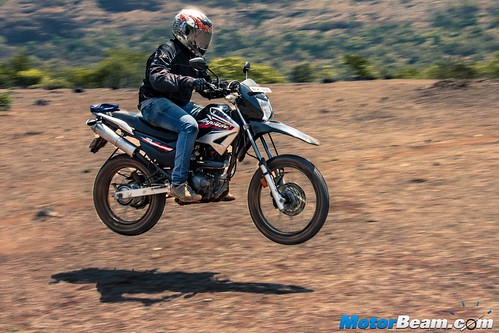 Verdict – The Impulse is a great proposition by Hero MotoCorp for India, and with the Fortpoint swapped engine, the bike becomes much more fun to ride. The motorcycle is very much practical and has very good performance with the engine mod. The Impulse is quick even at low revs while it gets punchier around the mid-range, the vibrations are quite a lot and the bike loses out a bit on the handling front but only when you push it hard. The Impulse was made with a focus of a 150cc mill and yet the chassis handles the 223cc powerplant quite nicely. With just Rs. 30,000/- extra on the pocket, the Hero Impulse 223cc is totally worth the extra buck. The icing on the cake being the 5-year warranty on the engine (the Impulse comes with a standard 2-year warranty) which gives buyers peace of mind.

The only reason the Impulse didn’t sell well was due to mediocre performance. Now with that taken care, the Hero Impulse with the 223cc swap is much more appealing. It’s high time Hero MotoCorp officially launches a quarter-litre off-road bike. 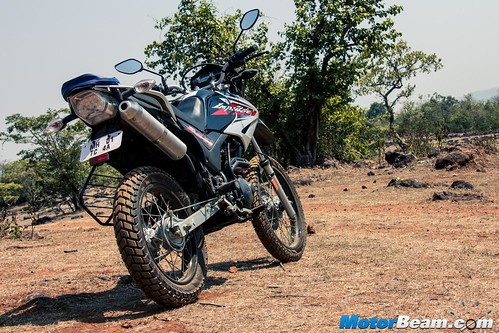 * Performance, the Impulse finally has the power it always needed
* Amazing ride quality, glides over the worst of roads
* Grippy tyres, ensures good traction when you go off-road

* Vibrations all over the bike
* No rear disc brake, stopping power should be better

Hero Showcases Stunts On The Impulse