The Hero Impulse is a sublime off-roader but mediocre on the road.

The 150cc motorcycle market is always top priority for manufacturers who sell motorcycles in India. As a result, we see every manufacturer has a 150cc motorcycle, which brings them bread and butter. Yamaha has the superlative FZ and Bajaj has the king of the segment, the Pulsar 150 and so on. Hero is the largest manufacturer in the world and India, producing the highest number of motorcycles and ranking first in the entire world too. The 150cc segment is pretty much ruled by Hero in terms of product numbers. As we all know Hero has four products in their kitty. The Xtreme and Hunk are the bread and butter while the Achiever despite many upgrades and re-launches fails to attract the customer. Then came the Hero Impulse. 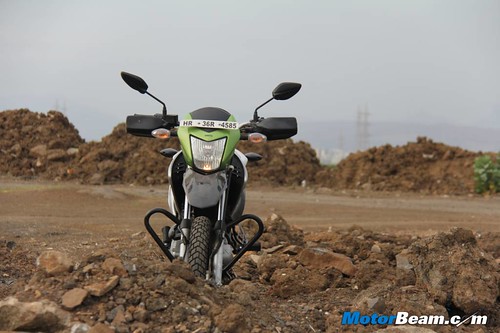 The Impulse was the talk of the town when it was launched. Every enthusiast was excited because finally a dirt bike has come to our shores. Reason why we mention it “came to our shores” because it was being sold in other Asian markets (and also Brazil) as the Bros NXR150 since a very long time. Why is it known the Bros NXR? More on that later. The Impulse was launched at a decent price tag and backed by Hero it had the initial success but that did not last long. Market did not appreciate the Hero Impulse because of several factors. However, we loved the motorcycle very much when we test rode it and it raised our pulses, so we decide to go the “long” way and added it to our fleet of long termers. 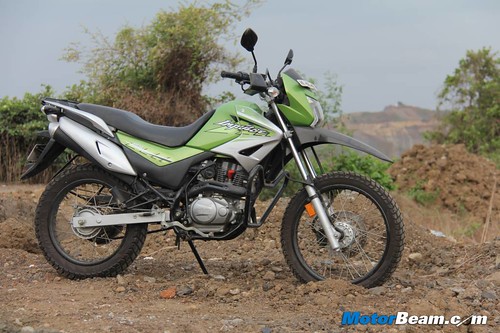 The reason it is called the Bros NXR because of the styling. The Impulse exactly looks like the international version. The square-ish headlight with the long and top mounted mudguard at the front that defines what it really is. The hand guards are here to give it “that” off-road feel. The small fuel tank actuates the side profile and side-top mounted exhaust with a neat looking exhaust cover makes it look like a longer motorcycle. On the fuel tank, we see the bikini fairing, which surely looks out of place for this motorcycle. Look below, we see this motorcycle has a monoshock, which is a Hero first until date, which with the top mounted exhaust gives it a very clean look from the side. The top tail section is dominated by a huge Xtreme inspired LED tail light piece and protruding grab rails and fatter knobby rear tyre. Overall with the tall stance and high ground clearance, it does the job well of defying its capabilities. 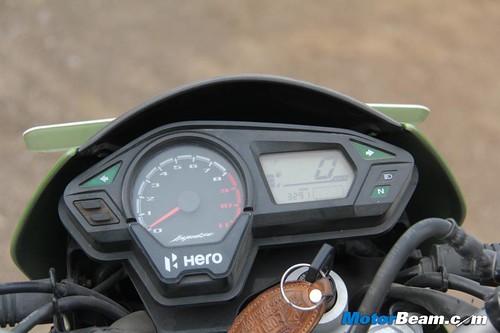 The instrument cluster is not that great like any other Honda vehicle of the past. Small and uninspiring and nowhere close to its competitor is the best way to explain it. The small tachometer and even smaller digital speedometer is not striking but gets the work done as always. The cluster does not show much information beside the basic trip meter and functional lights. Switchgear is average in terms of quality with its not so great feel or looks and the missing engine kill switch button, which is even missing on the Karizma siblings. 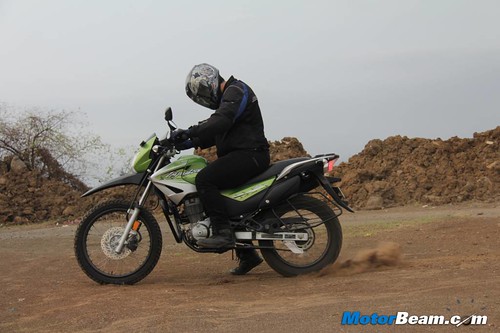 What we loved about the Impulse is the ergonomics. Ergonomics are the best suited for taller people out there. You sit higher and the wide handlebar gives you a commanding feel. Front set foot pegs like any supermoto motorcycle help you grab the tank firmly which is essential while off-roading enthusiastically. Below average height people will struggle to get their feet down and the wide handle being a bit more wider than usual, is a pain in traffic, specially when lane splitting, one the of the few reasons the motorcycle was not a hit with the mass market. Seats are jolly comfortable and well cushioned for long and short rides. 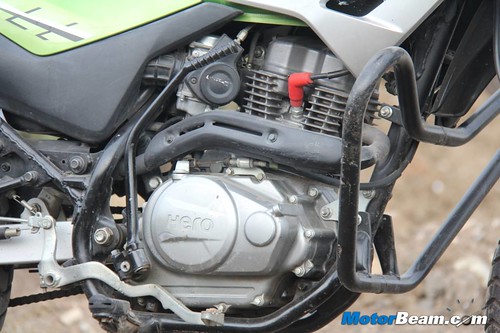 Speaking of long rides, the power train does not allow to do that in a relaxing way. The 150cc motor as we all know is derived from the Unicorn. There are a host of changes to engine. Gearing is slightly shorter and the carburettor is all-new because of the new fuelling system required for this type of motor. The engine produces 13.2 PS of power at 7500 RPM and 13.4 Nm of torque at 5000 RPM. Numbers are tempting indeed. Coupled with a low kerb weight of 134 kgs sounds fun too. However, its gearing that lets it down. The engine needs to be revved to the very limit to have fun, but when you do that, it’s no use too. Engine sounds coarse at redline. 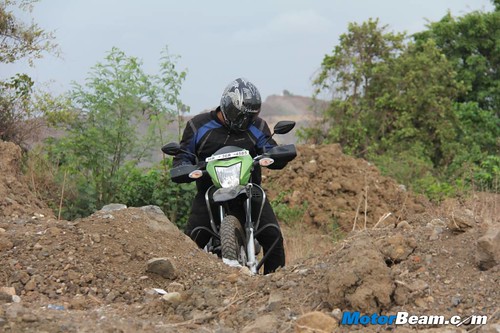 This motor has adequate low-end torque and no top end punch. The motor only provides with a good mid-range punch, which is not adequate for highways either. Part of the disappointment goes to sprocketing. Rear sprocket is huge at 50 teeth! Despite it, low-end torque is mediocre. Standing start is great because of the low kerb weight and a wheelbase measurement of 1360 mm, which is even higher than its elder sibling, the Karizma by 10 mm. Nevertheless, take the revs up to 8000 RPM and pop the clutch and it sprints of the line quickly. No matter how light you are, you are not going above 118 km/hr because of the tall stance is not cutting the air as motorcycles in the same segment do, because they have lower height. There is a sweet spot though. Third gear, 50 km/hr and nail the throttle and it goes (that’s the mid-range). 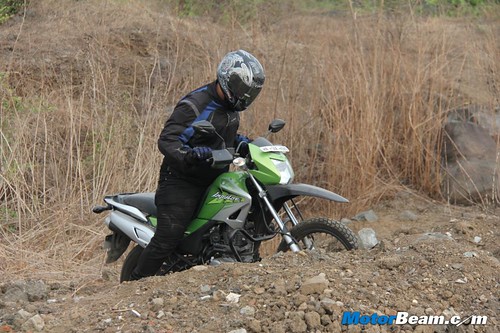 Since it is more of a off-roader than an on-roader, we can forgive it, only if the buyer is into serious off-roading. We also took the motorcycle to the off-roading academy in Mumbai to put it through its paces, which is known as Rajmachi. A steep, hilly, rocky surface in Lonavla is the only place to test this hidden dragon. Everybody knows how the rain Gods have been this year, naughty that is. First three months downpour was so insane that a single day didn’t go by when we reached home and office dripping like a wet mutt. We decided to kill the stress by taking the Impulse to Rajmachi. Rajmachi is no ordinary place, especially when it rains, it becomes a difficult terrain to go through. Fog hampering visibility, hilly areas reducing compression, semi-lake formations every kilometer, river like water gush at every intersection and constant downpour in all means its “adventure” for motorcyclist. I was on the Impulse with a bunch of bikers with their naked street motorcycles. 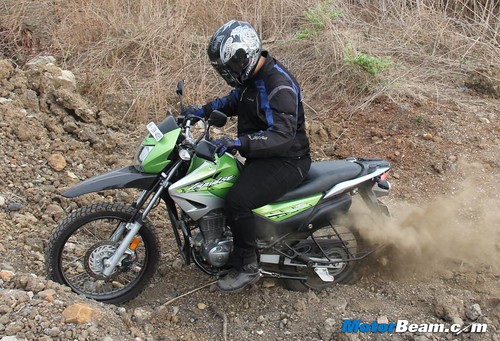 This motorcycle, which went through all the abuse everyday on the road and daily routine, performed so beautifully and flawlessly in these bad conditions that it left us awestruck. Slot it into first with three bars of fuel, it kept climbing and climbing without any drama. Rocky, muddy and slippery surface with red colour (mud) everywhere. Huge puddles of water when we saw the engine head almost covered in water and still the Impulse stands uninterrupted and moves forward. Courtesy? Empire state alike long travel suspension at the front and a humongous 245 mm of ground clearance. 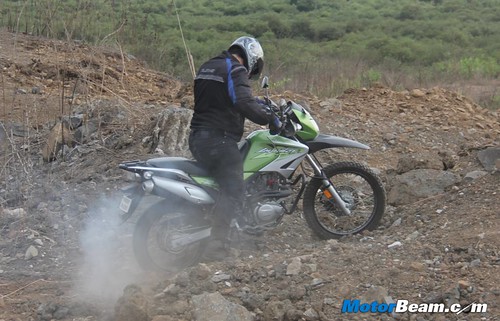 The Impulse did fall down twice only because of human error rather than performing a stunt or because of the treachery of mother nature. Despite all kinds of torcher, the bike did not stop functioning or let us down anytime. The main advantage of the Impulse is the top mounted exhaust because there is nothing, no condition that reaches up to that height and blocks the exhaust for any reason. Knobby tyres and softly damped suspension made sure there were was no skittishness during the entire period, it’s that confidence inspiring and fun when off-roading. Even these treacherous conditions felt like a walk in the park.

Coming back to the road, the mourning begins. Dynamics are gone for a toss. If you want to enjoy slow sweepers and corners, you have to rev the nuts of the engine to gain the stiffness you need to go around corners. This motorcycle is not meant for leaning or getting your knee down, it’s the motorcycle that will force you to get your leg down and scrape and tear your boots while negotiating turns. A 19-inch wheel at the front and a 17-inch wheel at the rear with high profile tyres and long travel suspension with enormous amount of ground clearance gives you the ride quality you desire on our bad roads. The ride quality is superb and extremely plush. The Impulse dismisses small and big potholes alike, which says a lot about the superior ride quality. Braking is good and the bike stops well. However, the problem is the fork dive due to overly soft suspension and also due to the thin front fork diameter, which at first, feels immensely scary but you do get used to. However you have to pay attention every time you brake. 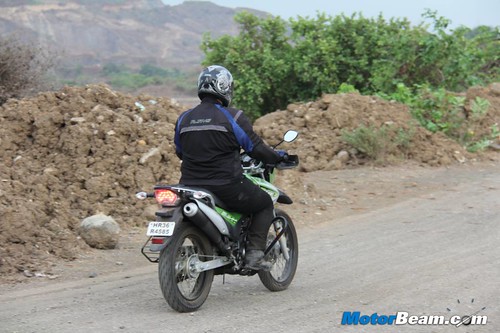 The Hero Impulse comes with space for luggage right behind the pillion seat, which can carry up to 5 kgs. There is no under seat storage, only a locker to store your documents. We recommend you ride the Impulse with only boots, because the hot exhaust is very near to your feat, in rains if you go through a puddle of water fast, the water that comes to your feet is hot. However, in normal weather conditions if you are not careful, you may end up touching your feet once in a blue moon. Mileage during the entire test was 42.4 km/l in the city and 47.6 km/l on the highway. Efficiency in city is average, but the highway efficiency could have been better. The handlebar has the tendency to get lose after every two months if ridden fast over bad roads. Don’t worry the cone set does not go for a toss easily. The rear brake pedal is exactly like the ones found on dirt bikes, no doubt there is attention to detail. 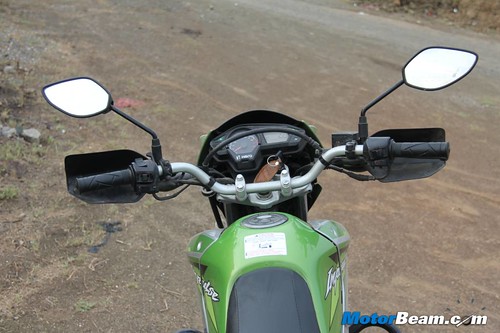 If you own a Hero Impulse and want to make it a wee bit of a road bike, we suggest you go for a rear sprocket with lesser teeth and change the tyres front and rear for 10 mm lower profile. For example, the stock tyre at the rear is 110×90, you can choose 110×80 dimensions. This will give some stiffness and will not affect the splendid ride quality either. There is stupendous amount of aftermarket support for this motorcycle like any other Honda motorcycle with a 150cc engine. Tweak the engine or the chassis, suspension components, you choose.

Despite the shortcomings (like the seat height issues and uninspiring dynamics), the Impulse comes across as a good alternative in the 150cc segment. The plush ride quality (due to softly sprung suspension) is a boon for some and curse for others. However, if you look into it, the people who will curse it will never buy the Impulse in the first place. The Impulse is a great bike for our roads. We all know how our roads are, specifically in the rainy season (we had this bike throughout the season and we absolutely loved it for providing maximum comfort with the fun, which one expects from dirt bikes). Backed by Hero’s cheap and cheerful service and strong reliability (all Hero motorcycles come with a 5-year warranty), the Impulse is a bargain for the enthusiast who loves dirt more than tarmac. 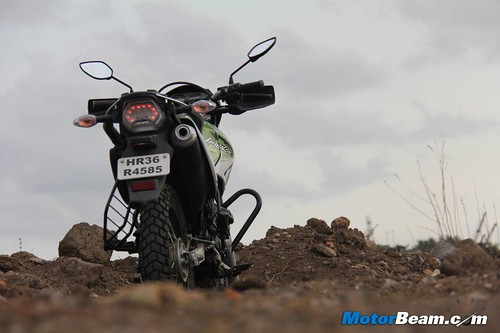