Since quite a few years, Hero MotoCorp has been showing us some brilliant motorcycle concepts. But sadly, they have just been concepts. A few months back, in January, Hero launched the Xtreme 200R and after almost 4 months, they got us to the Buddh International Circuit to ride the machine. Sigh! Yes, the first ride of the Xtreme 200R was on the BIC and genuinely speaking, I am impressed with the bike. It was not the best location to test but it was absolute fun, except for the Delhi heat obviously! 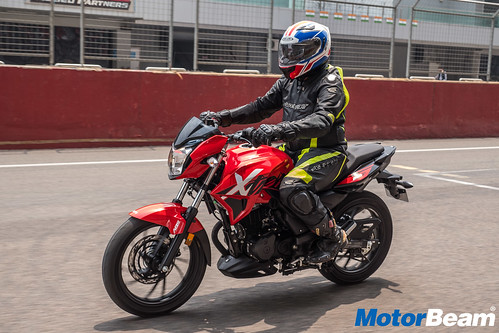 From the front, the 200R looks very similar to its younger Xtreme sibling

Styling – In terms of styling, the 2018 Hero Xtreme 200R comes across as a well-designed motorcycle. Save for the headlamp, turn indicators and the LED tail-light, everything else on the motorcycle is fresh. Even though the LED positioning lamps look more tacky than modern, the small visor above the headlight brings some character. The tank shrouds integrate seamlessly with the muscular fuel tank to give the Xtreme 200R a powerful stance. The Xtreme graphics on the fuel tank are well-finished and add to the sportiness. The bike gets a single-piece seat but the latter half of the seat has been raised. The rear-end isn’t the sweetest looking because most bikes in the market offer a sleeker looking tail section. Thankfully, the fat 130-section tyre helps both in terms of aesthetics as well as functionality. There are split grab rails on offer and the Xtreme 200R gets 10-spoke alloy wheels which look really cool! 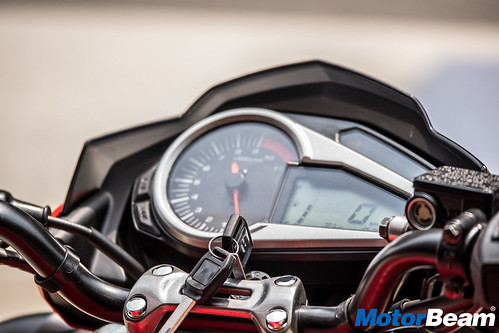 Instrument Cluster and Switchgear – The 2018 Hero Xtreme 200R gets an analog-digital instrument cluster with blue backlight. The digital display features a speedometer, two trip meters, odometer, fuel-level indicator and a clock. The tachometer is analogue while the tell-tale lights are positioned right above the digital display. The switchgear is of good quality and the buttons have a tactile feel to them. The LHS switchgear houses controls for the horn, turn indicators, choke and high/low beam while the engine kill switch (finally!) and an electric starter button have been placed on the RHS. Shockingly, the electricals on this bike are AC which, in 2018, is very disappointing. 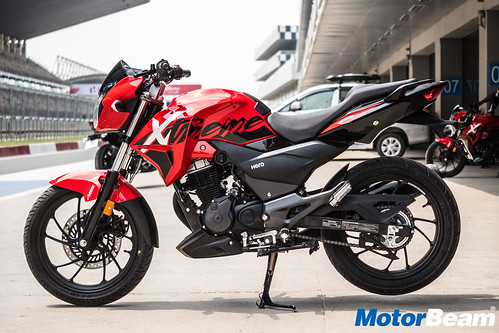 Ergonomics – When it comes to ergonomics, the 2018 Hero Xtreme 200R is a very comfortable motorcycle. It gets a single-piece seat which is really well-cushioned. The pillion seat is wide and accomodating as well. However, the bike gets a single-piece handlebar while the competition is little ahead with clip-ons as standard. In terms of the riding posture, the bike gets an upright seating and centre-set footpegs. This results in a sorted seating position which makes the Xtreme well suited for city commutes. The 795 mm seat height makes the bike easily accessible to even the shorter riders but the rider has to slightly stretch his arms to reach the handlebar. The rear-view mirrors offer a good view of what’s behind. The standard variant of the motorcycle weighs 147 kgs, while the addition of ABS makes it touch 148 kgs.

Royal Enfield is on a product offensive for next 3-4 years. New Royal Enfield model to launch every quarter. Yes you heard that right. The   END_OF_DOCUMENT_TOKEN_TO_BE_REPLACED