The Honda Brio is an extremely capable machine and despite a few setbacks in Thailand, the deliveries are now on in full swing. Honda is showcasing the Brio’s capabilities via the Honda Brio – Drive to Discover. A similar drive was earlier done with the Honda City from Jammu to Trivandrum. 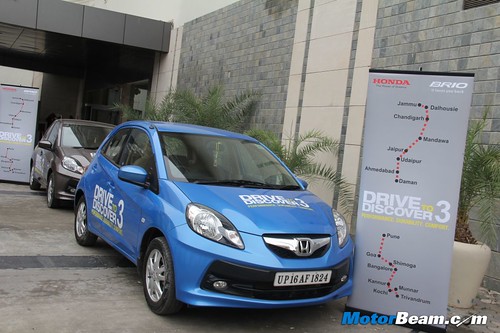 This time we take the Honda Brio along the same route and take over the third leg of the drive from Jaipur. We have been assigned to drive till Ahmedabad via a night halt at Udaipur. There was one car for the journalists and one support car which was driven by Honda officials.

We were flagged off from Jaipur at 8.30 AM and had to cover a distance of 428 kms on the first day, our destination being Sheraton Palace, Udaipur. The simplest route was taking NH8, which forms a part of the golden quadrilateral. After negotiating city traffic, we were soon on the highway. Roads in Rajasthan are simply amazing, smooth tarmac for kilometers together with an occasional rough patch, mostly around the villages we pass on the highway. The weather was great too, slightly overcast with occasional showers. The Honda Brio proved to be an extremely comfortable car. After covering a distance of 428 kms on the first day, there was hardly a hint of fatigue. Getting into Udaipur was a task as we lost GPS signal several times and had to go through narrow village roads with a few off road excursions. Despite all this, we made it to our destination at 5 PM. 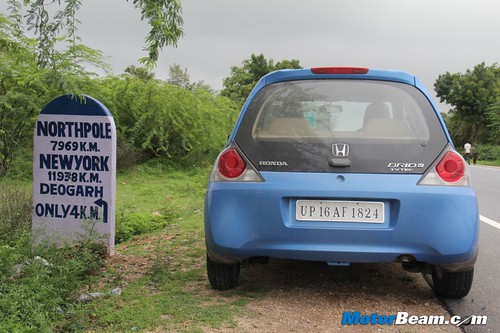 We found this hilarious milestone on the way.

We set off for Ahmedabad on the second day. After a lazy breakfast, we were buckled up by 9.45 AM. This section of the route involved some hilly driving and the Honda Brio was up for a challenge and surprised us with its polished high speed manners and cornering ability. The car felt extremely safe and planted at triple digit speeds and we were having our share of fun pushing it through the corners. As we entered Gujarat, we were stopped for security check, the cops clearly had a liking for the Brio and inquired about its price and mileage. Apparently there is some rule in Gujarat which states that all cars in the state must have yellow tape on the headlights. Probing further, one cop told us that its to prevent the light from scattering. We almost lost our faith in the Wave theory of light but complied as per the state laws. 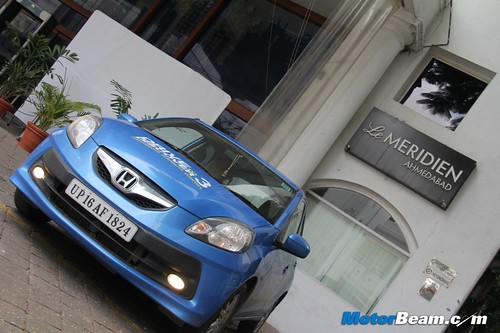 We were shown the chequered flag in just three and a half hours time at Hotel Le Meridian, Ahmedabad and covered 270 kms in good time. 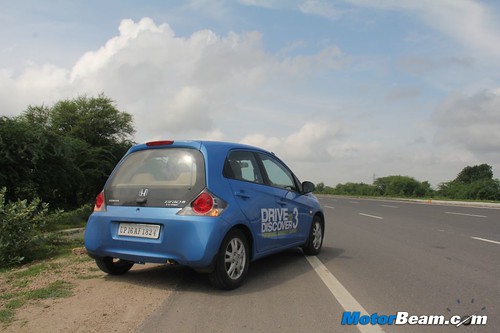 The highlight of our drive was the fact that in spite of driving for 698 kms, there was no hint of fatigue. The Honda Brio is extremely comfortable and also caters to important safety features such as ABS and airbags. The petrol engine from the Jazz is reasonable peppy and offers decent performance with brilliant mileage figures. The Brio returned a mileage of 15.6 km/l on our drive. In the city, the steering is light and nimble and its easy to negotiate through thick traffic while it still feels stable on the highways at high speeds. Though it was predominantly highway running, we were keeping the engine on the boil most of the times. It was a memorable experience and yes, not only did the Brio love us back, we loved it too.

Honda Could Launch Diesel Brio In India With 1.5-Litre Engine

New Honda Brio Being Developed For Global And Indian Markets