The Honda CB Unicorn 160 is much better than its predecessor, offers trouble free riding too

If there’s one popular vehicle from the stable of Honda other than the Activa, it has to be the Unicorn. Launched in the county almost a decade ago, the bike was instantly lapped by people who preferred a refined motor and a relaxed riding position. It became the perfect 150cc machine for daily duties. Over the past years, it got minor updates and continued to sell in good numbers. Like all things, change is necessary in the automotive world too and hence Honda replaced the Unicron 150 with the CB Unicorn 160. We have had the bike since a few months now and have been finding out how well does it perform in varied conditions. 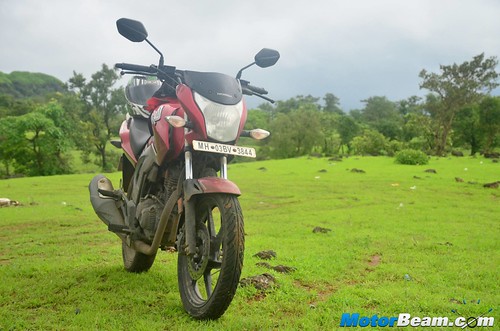 The design of the Honda Unicorn 160 is minimalist with no element particularly screaming for attention. The other bikes with which it competes get much more attention grabbing styling which appeals to the youth. Honda has chosen conservative styling to appeal to the middle aged folks who prefer understated looks. Even after being the most torquey bike in the segment, no one can look at it and say that it would beat the others. One element which I particularly like is the H-shaped tail-light which looks cool at night. Even those who see the bike notice the same. 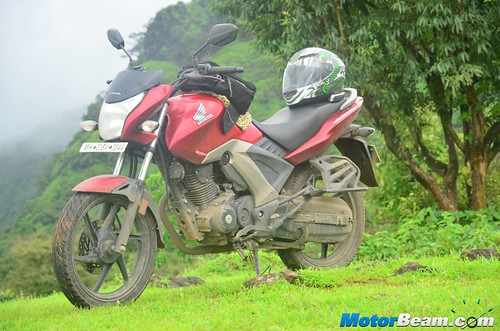 Mild heat from the engine is noticeable in stop-go traffic

While the motorcycle was previously used for long distance trips, since quite some time it has been doing duty within the city with minimal out station trips. This has helped us find out how it performs in daily riding situations especially stop-go traffic. Heavy traffic conditions is something which this Honda doesn’t like much because the engine starts heating up and it becomes noticeable after some time. Also, after tackling speed bumps which reduce the speed by a fair bit, shifting to first gear becomes inevitable. 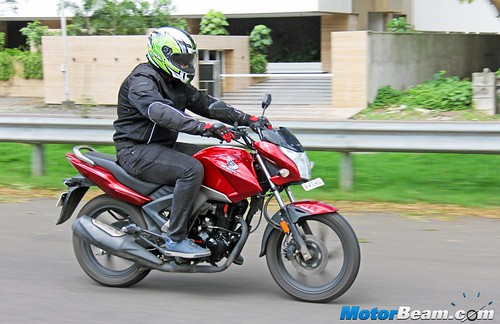 Launching from signals is fun, 11,300 RPM redline is highest in class

Redlining the 162.7cc motor is great fun, leaves other 150cc bikes way behind

There’s one thing which surprised me though. Even after not being a looker, the CB Unicorn does make people strike conversation with you. Maybe it is the red colour of our test bike or maybe it is the Honda name. Answering queries is fun as most of aspects of the bike are better than its predecessor. Another enjoyable scenario is to be in the first line at a traffic signal and wait. As soon as the lights go green, mashing the throttle takes the motorcycle to its massive 11,300 RPM redline in a jiffy and before you know it, you are doing good speeds. Other bikers who catch up at the next signal are red with envy with me having a wicked smile until the signal turns green again. 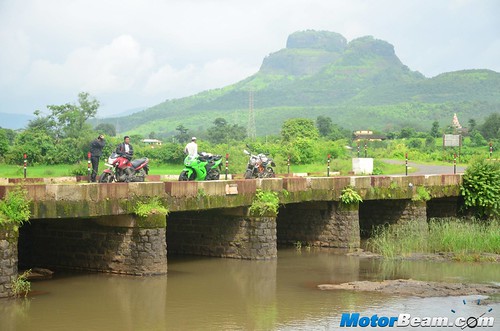 Keeping up with faster bikes is easy, cruising at 100 km/hr isn’t a problem

The engine is a proper Honda motor which means that the refinement is excellent and no vibrations are felt. Out on the open roads, redlining the bike in each gear is great fun because the Unicorn 160 loves doing that and doesn’t hesitate at all. Keeping up with bigger bikes isn’t too difficult as Indian roads do give you plenty of opportunities to catch up. The ride quality is excellent with the suspension doing its job very well. Even after putting it through all sorts of potholes and bad roads, it has held its ground very well. But, there’s an underlying stiffness at the rear which makes its presence felt on bad roads. 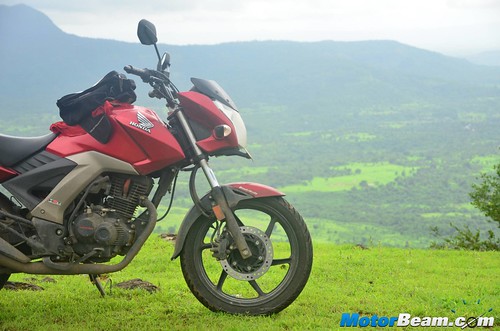 The brakes offer good bite, tyres should have been a tad bit wider

Another element on the Honda CB Unicorn 160 which deserves a special mention are the brakes. Even though it doesn’t get a rear disc brake, the braking is very good. The Combi-Braking System (CBS) helps a lot with this and keeps the rider out of tricky situations. The MRF tyres provide adequate amount of grip but a wider tyre would have made things better albeit reducing fuel efficiency by a bit. Talking of fuel efficiency, with majority of city riding and a fair number of redlining instances, we managed to get a respectable 45 km/l consistently. Riding with a light right wrist helps in taking the figure above 50 km/l but the motor begs you to redline it and you can’t resist sometimes. 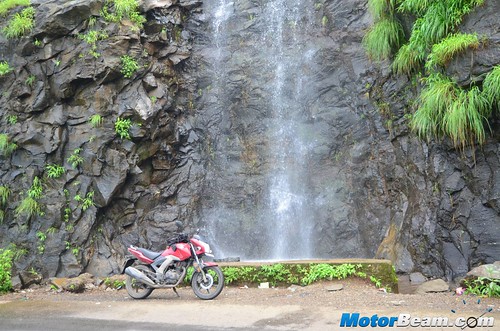 After riding the Honda CB Unicorn 160 extensively, I now understand why the bike attracts mature riders. The understated looks combined with a powerful yet efficient engine is what draws customers. Yes it misses out on an engine kill switch and heat dissipation isn’t the best but discount these factors and the overall package is brilliant for the price. When we were to swap bikes amongst ourselves, getting the keys to the Unicorn 160 was very easy whereas even asking for the keys to the Suzuki Gixxer was a crime. The Unicorn 160 has gone back to Honda but we have inducted a bike with the same engine into our long term fleet.

The Unicorn CB 160 is a much improved product over its predecessor, the Unicorn 150. It is better in almost all aspects but is a notch below in terms of refinement. It is a practical daily commuter for the middle-aged people. 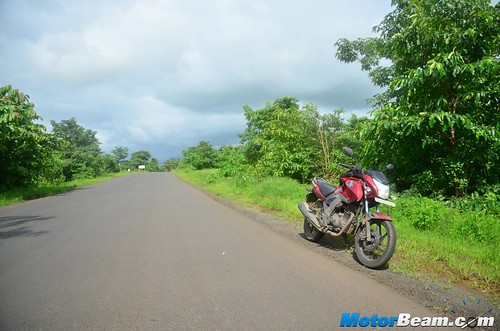 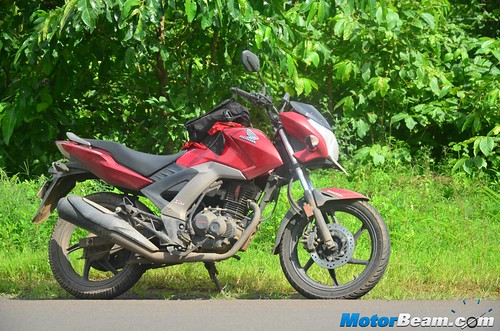 The bike has adequate power, gives great fuel efficiency too

“Dazzler, Trigger, Unicorn 160 – three bikes from the same segment with a strong mechanical package, let down by commuter-ish appearance and ergos. Still, the Honda CB Unicorn 160 despite being a commuter for the city, has strong enough performance to put a smile on the rider’s face. It also looks quite good and the smaller tyres might not have the visual strength but result in better mileage where this Japanese motorcycle excels.” – Faisal Khan, Editor, MotorBeam.
“When I was told to switch the Hero Splendor Pro Classic with the Unicorn 160, I took the keys before Faisal changed his mind. I loved the way the motor went all the way to the redline. The suspension felt nice and so did the brakes. Riding position was very commuter-ish and this is one thing which I personally didn’t like much over long rides. However, in the city, the comfortable riding position helps. If one wants a trouble-free commuter, this should be the choice.” – Aman Sancheti, Road Tester, MotorBeam.
“The Honda Unicorn which ran for a long time had the heart of lots of people. With the newer Unicorn 160, the extra power and new design got some appeal but still couldn’t do what the older Unicorn could do. Comfort at all times with just enough power was the oldie’s game, this one though is the fastest in its segment. The Unicorn 160 is more of a city player than a highway cruiser.” – Dhanil Vira, Road Tester, MotorBeam. 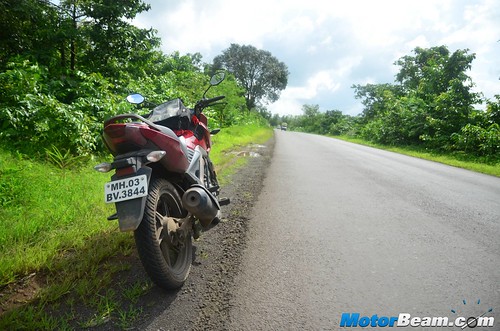 Even though the looks are understated, the tail-light grabs attention