The CB Unicorn 160 is powerful yet hassle free ride for the city, it offers supreme comfort

Honda’s first motorcycle launch in India and also its most popular motorcycle brand, the CB Unicorn has sold consistently in good numbers and after a decade, has finally been replaced by an all new model, the CB Unicorn 160. Honda just didn’t pick up another bike from its massive global portfolio and launched it in India, instead it developed the Unicorn 150 specifically for the Indian market, launching it in 2005. The motorcycle instantly became a favourite of middle-aged men who in spite of new options, simply wouldn’t look elsewhere. With the latest Unicorn 160, Honda has somehow killed two birds with one stone, it has finally said bye to the old Uni while diverting Trigger buyers to the Unicorn. The powerful Honda 162.7cc commuter has joined our long term fleet and has given us a fair idea as to why so many people prefer it. 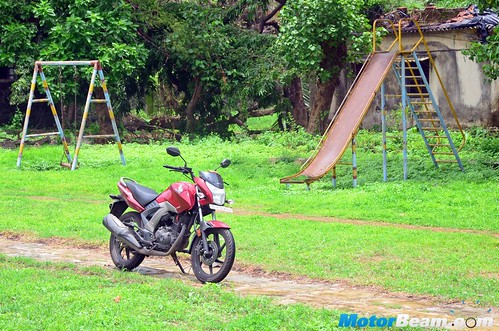 Not a looker, the Unicorn’s neutral looks won’t call for a second glance

Honda always plays it safe with the design of its bikes and although the Unicorn 160 packs in the highest displacement motor in the segment with the most torque output (even the powerful Pulsar 150 NS doesn’t beat it), it simply doesn’t look fast enough. Honda’s conservative design puts off a lot of young buyers and that’s the reason why the company is selling bikes to a more mature audience who want something neutral looking. As is always the case, the styling does grow over you with time but this isn’t a bike which would make you look twice once you park it while we do tend to stare at its rivals when ever we encounter them. 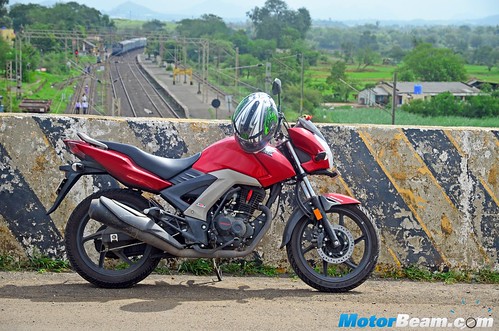 An apt ride in the city, this bike is very easy to handle in crowded areas

The first thing I did after getting the Honda CB Unicorn 160 was to ride it in the city as that’s where it feels at home. But there was a problem, everywhere I would go, people would turn around and stare at this motorcycle. This starts to contradict my previous paragraph or does it? Not really because the people who were looking at this red Unicorn 160 weren’t young, they were uncles and before I could make sense, someone struck a conversation. How is the bike? Is it better than the old Unicorn? What mileage does it give? Among these inquisitive people, some were Unicorn 150 owners and I had to reply back in a subtle way, conveying that the new Unicorn 160 is like a thousand times better than the old model. 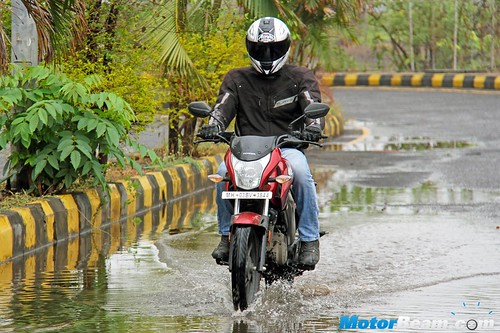 Wider tyres would have been nice, especially in rainy conditions of Mumbai

In India it is difficult to convince people about new products, everyone wants to buy a proven machine, thereby having the same risk averse nature which Honda’s design department carries. When you tell them about the positives of the new Unicorn, they would argue that the old one is cheaper and smoother. I would have explained to them the concept of evolution but those 14 and a half horses were ready to leave everyone behind in a jiffy, so full throttle I did and I suppose they got their answer when they say the Unicorn fly by. What gives this bike such stellar performance is of course the class leading torque of 14.61 Nm, this Honda having instant response and offering a butter smooth idle. 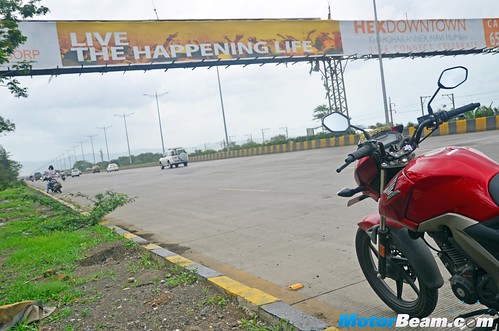 It’s the performance of the Unicorn 160 which I like the most, the low-end is strong and so is the mid-range while the top-end is accentuated by the massive 11,300 RPM redline which is the highest in this space. This is a true Honda heart beating in there because it sounds sweet and the refinement levels really blow you over (thanks to the counter balancer which ensures no vibes), no knocking whatever the gear and speed. The gearing is tall and for a redline nut like me, I extract every inch of the rev limit to have some fun on the open road. 0-100 km/hr comes up in a quick 16.15 seconds which makes it the fastest bike in the segment! That’s the reason why Suzuki Gixxer riders are left in the dust and have no idea what struck them at the traffic lights. 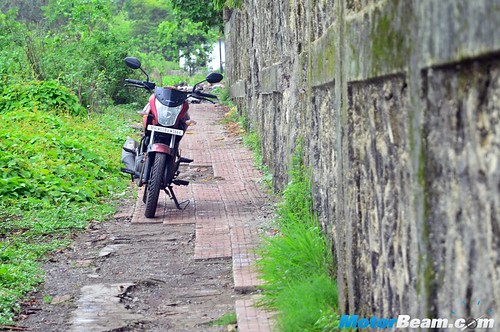 Good ride quality means you can take it anywhere, any how, any time

However, it’s not all praises because being a Honda there are drawbacks or rather it’s something which doesn’t appeal to biking enthusiasts like us. Yes, I am talking about the position of the pegs. Every time I get on the saddle, I put my feet way behind because we all are used to rearset pegs. But the frontset pegs offer a ton of comfort and so does the upright riding position and the light steering. This only robs away confidence while riding fast because the Unicorn 160 is a fine machine which can sprout a smile on your face with its nimble and surefooted handling. 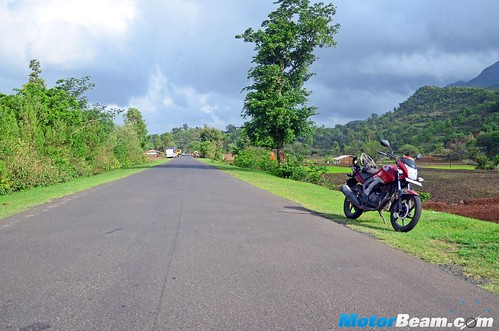 Thanks to the potent mill, cruising on the highway is effortless and overtaking is easy

The CBS brakes are just fantastic, makes stopping trouble free at all times

One will be surprised by how good the Honda CB Unicorn 160 is on the open road. It munches up miles with little effort and the sweet motor makes it a breeze to overtake slow moving traffic, a quick downshift and bang you are gone. The ride quality is pliant but the rear suspension is on the stiffer side which can be a pain on bad roads. It does provide good stability to the Unicorn at high speeds, the real top whack being 114 km/hr. The MRF tyres offer very good grip but are small in size in the interest of economy and with a light right wrist, we have managed the mileage figure crossing the 50 km/l mark. 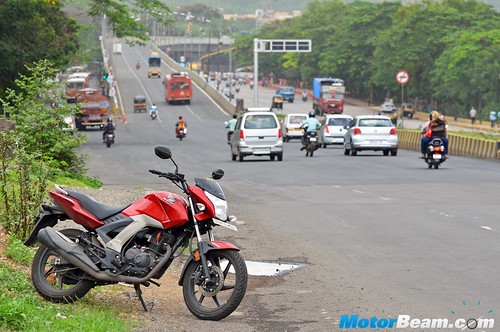 An excellent city bike, the Unicorn 160 beats its rivals hands down in practicality

Things start to make a lot of sense now, the Honda CB Unicorn 160 carries all the positives of the old model and improves on crucial aspects by offering even better performance than before. It is also modern now with updated styling, all digital instrument cluster, CBS brakes and an engine which is quite a modern unit with fins for better cooling. Being easy to ride, high on mileage and hassle free at all times makes this the pick of mature buyers who aren’t used to an engine kill switch to want one on their bike and aren’t looking to take to valley roads on weekends or impress the opposite gender. As long as the Unicorn 160 isn’t compared with its rivals, it’s a splendid motorcycle in the 150cc segment but then, our long term garage makes us draw comparisons. 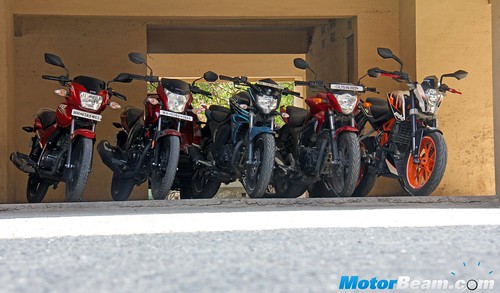 Our long term bike fleet will soon be joined by a cafe racer, diversity at its best

We have the best of best from the 150cc space in our fleet and everybody including the mature riders (riders who don’t care about speed or looks) pluck for the keys of the Suzuki Gixxer. In fact, the reason I am riding the Unicorn 160 currently is, I don’t have to fight it out with my team mates for its keys while to get hold of the Gixxer, a lucky draw is in order. But when you compare this Honda with Yamaha’s top selling bike, you realise that the Unicorn 160 has gone one up over the FZ and that’s the reason why the ‘Wing Rider’ managed to beat the ‘Lord Of The Streets’ in sales in recent months. Now maybe I should go for a spin on the KTM! 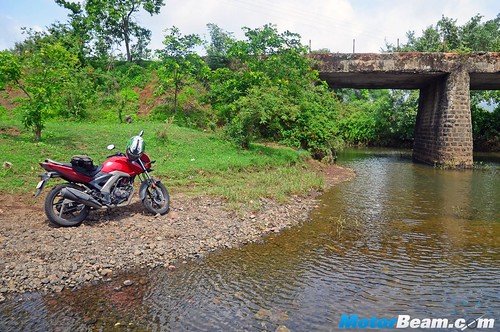 Time to explore the countryside on the Unicorn 160, thanks to frugal Honda mill