Hyundai Eon’s entry into the A-segment has made Maruti Suzuki go back to the drawing board and how!

Entry level cars are the most important in India, as they account for a major chunk of sales. Maruti Suzuki has been milking the entry level segment since quite a while now, with absolutely no competition to shake them. Since the very launch of the 800 in the 1980s and the Alto in the 2000s, Maruti Suzuki has remained the undisputed king of the A-segment. The Alto has put forth record sales month after month only to be challenged by Hyundai’s game changing Eon in 2010. India’ largest car maker has now upped the game with the revised Maruti Alto 800, which is the first facelift of the car since its very launch 12 years ago. But does the Alto 800 manage to fend of the brilliantly engineered Hyundai Eon in India? 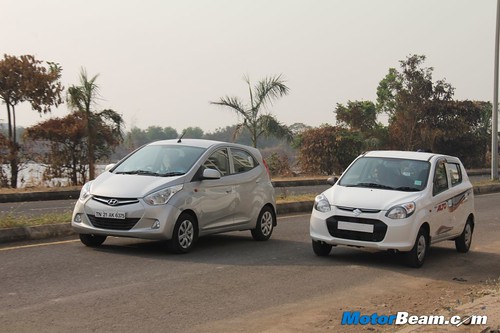 Exteriors – The Maruti Alto was recently refreshed in its Alto 800 avatar. While the old Alto looked dated, it was atleast cute, which unfortunately the Alto 800 is not. The Alto 800 instead evokes mixed feelings. While the Japanese car maker has lifted quite a few styling elements from other cars, the overall output seems far from positive. The Alto 800 looks confused and very awkward from certain angles (especially the rear). The high ground clearance, small wheels and lack of lines make the Alto 800 look bland. The Hyundai Eon on the other hand is a stunner from every angle you view it. This small car has the right dimensions and lines, with the fluidic sculpture futher accentuating the styling of this car. The Eon looks extremely stylish and modern, making the Alto 800 look extremely drab in comparison. 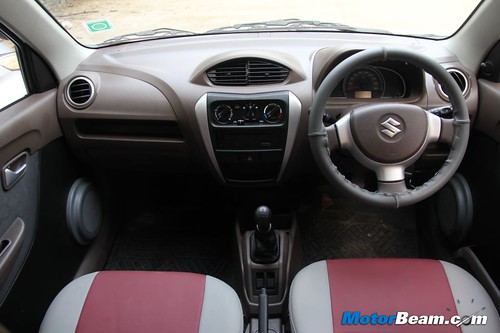 Interiors – While both the Eon and Alto 800 are entry level cars, buyers expect these vehicles to offer decent interior room for four passengers. The Alto has been known for being extremely cramped for tall passengers and rear occupants. The Alto 800 has somewhat resolved the lack of space to a certain extent. In comparison, the interior space is almost similar with both cars. The Alto’s rear seats offer poor under thigh and back support .The new dashboard does look good and quality has improved leaps and bounds too. However once you get inside the Eon, the Alto 800’s interiors take a back seat. 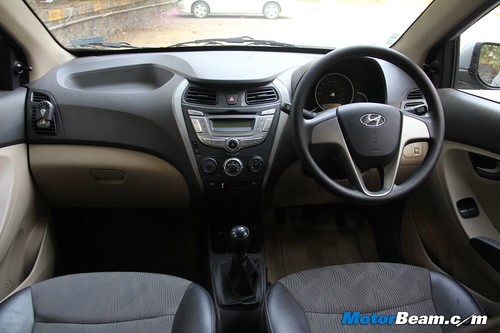 Hyundai has done a splendid job with the interiors of the Eon. The dashboard design and layout are very well executed, making passengers feel they are in a more expensive car than they actually are. The Eon also has slightly more space than the Alto 800 and that enables a fifth passenger to squeeze in. The instrument cluster of the Eon with green bars for temperature and fuel meter look really good, while the dual tone beige interiors give the vehicle an airy feeling. The top end variant of the Eon also gets integrated audio system with USB and AUX ports. The storage areas in the Hyundai Eon are more than the Alto 800 too and so it the boot which at 215-litres, trumps the Alto 800’s 177-litres comfortably. Overall, the Hyundai Eon is ages ahead in the interiors over the Alto 800, offering more practicality. 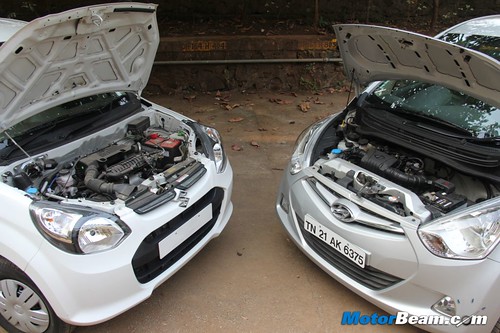 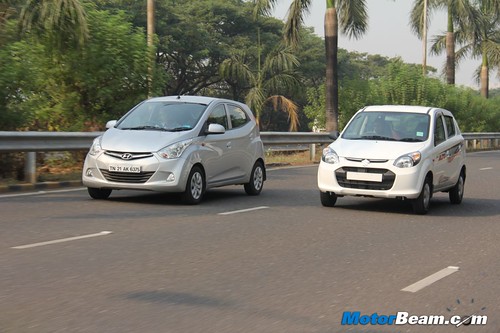 Being lighter of the two, the Alto 800 feels quite peppy and eager for a small capacity motor. The Hyundai Eon has decent pep but the Alto 800 is simply faster. Both cars are extremely drive-able in the city and tend to run out of breath out on the highways. Maruti Suzuki has done a fantastic job with the upgraded 3-pot mill in the Alto 800, which although does feel jerky at low speeds, isn’t high on vibrations. The Eon does tend to vibrate a bit, an inherent flaw of 3-cylinder engines. The vibes can be felt through the gear knob at low speeds. Both vehicles have 5-speed manual transmissions, with light clutch action and smooth shifting mechanism. 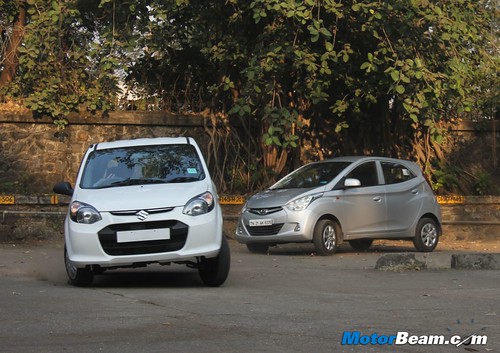 Driving Dynamics – Both cars feature the basic suspension system. The Alto 800 runs on 145/80/12 high profile tyres, while the Eon runs on two different set of tyres, depending on the variant. The lower variants get 145/80/12 tyres while the higher variants get 155/70/13 tyres. Both the Eon and Alto 800 offer good ride quality, but the Korean does get unsettled on very bad roads. The Alto 800 has better handling too and the light weight does help in making it the more agile vehicle of the two. High speed stability is better in the Eon though and so are the brakes which are more surefooted. 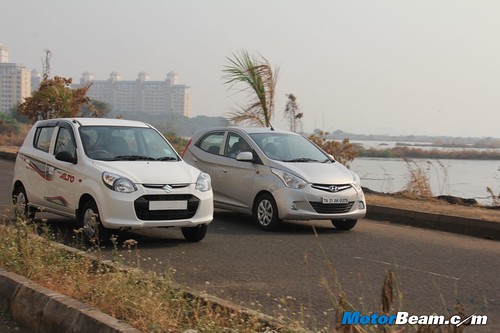 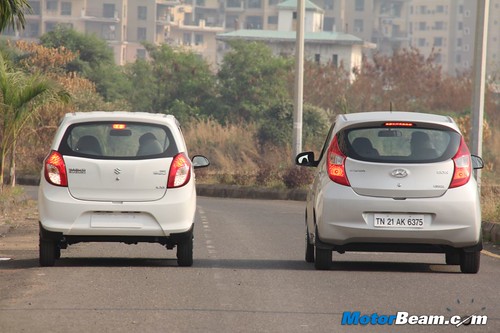 Variant to variant, there is marginal price difference between both these cars, with the Eon being slightly more expensive of the two. However the Alto 800 comes absolutely stripped and doesn’t even have a left side mirror or central locking. Hyundai has equipped the Eon with many bells and whistles unseen in an entry level car, which makes the higher price well worth it. While the Alto 800 is a very good leap over the old Alto, it’s not enough to unsettle the Hyundai Eon from being top car in this segment. The Hyundai Eon is a more rounded package which makes it the winner in this shootout.

The Hyundai Eon proves that entry-level cars don’t have to feel cheap, which makes it a more rounded and appealing package over the Maruti Alto 800.