The petrol Grand i10 is as impressive as its diesel counterpart.

It’s not very often a car as significant as the Hyundai Grand i10 hits our roads because this vehicle has the capability of sending its competitors back to the drawing board. Hyundai has been getting everything right of late and that’s simply because the company has stuck to a tried and tested formula, of providing customers with what they seek most, VALUE. The Grand i10 is such an important vehicle for Hyundai India that it went on sale even before it made its public debut in global markets (as the second generation i10 at the 2013 Frankfurt Motor Show). We have already reviewed the Hyundai Grand i10 in detail before and this time we get behind the wheel of the petrol model. 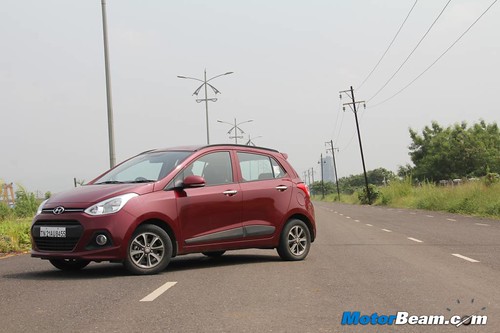 The styling of the Grand i10 is more of an evolution of the old i10, something which only strikes you when you see both cars head-on. The Hyundai Grand i10 has evolved, it looks more mature and modern too. The fluidic treatment is there but not in a heavy way and the front seems to be inspired from the Eon a bit. The side and rear are the most attractive parts of the car with the attention to detail quite highlighted on those sides of the vehicle. Chrome door handles, roof rails, body side moulding, rear spoiler, swooping tail gate are all part of the styling elements of the Grand i10, which work wonders in giving the car a fresh appeal amongst the mundane hatchbacks.

Hyundai has upped the game in the interior department and how. The dashboard is quite different from regular Hyundai cars and those round AC vents and dual-tone treatment do give the Grand i10 a very retro sort of appeal. The steering is loaded with buttons and blindfold a person and put him in this car and they won’t be able to guess it’s a hatchback, such is the level of quality and equipment (no distance to empty though). Plenty of storage spaces inside the cabin as well and the dashboard mounted gear lever liberates a lot of space between the front seats, near the handbrake. Rear visibility is excellent too and so is the visibility from the rear thanks to the integrated front seat headrests which don’t feel like a compromise at all. 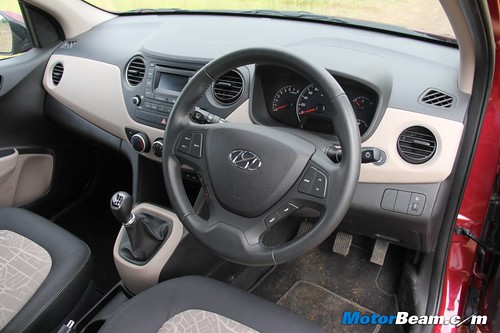 Even passenger comfort is taken well care off, seats are supportive and there is plenty of rear seat legroom. In fact the rear bench offers terrific levels of comfort with excellent visibility thanks to the wide opening doors and large windows. Ah, not to forget the rear AC vent, a segment first and much needed feature in the hot and humid climate of Mumbai. Small attention to detail by Hyundai is really worth appreciation like the cooled glovebox and automatically turning off cabin light and headlight (in case you forgot to turn them off after leaving the vehicle). In spite of generous interior space, Hyundai has managed to offer a big boot which can shame most of the cars at this price point.

Crank the familiar 1.2-litre Kappa petrol engine to life and it wakes up with almost pin drop silence. NVH levels are fantastic till about 3500 RPM post which the motor is vocal, more so near its 6500 RPM redline but in a nice way. While the same VTT equipped motor is well known to us as it performed duties in the old i10, Hyundai has, among other changes, tweaked the motor a bit by modifying the piston to improve breathing. The result is improved throttle response and better overall performance. Outputting 83 PS of power at 6000 RPM and 114 Nm of torque at 4000 RPM, the Grand i10 seldom feels out of breath and pulls in a linear manner.

The Kappa motor powering the Grand i10 has a strong mid-range punch and its only at the higher end of the rev band does it lose steam. Low end performance is good too which makes drivability in the city a relaxed affair. Coupled to this engine is a 5-speed gearbox which itself offers quite slick shifts with a light clutch to boot. 0-100 km/hr requires a last moment upshift to third gear and the gearing is itself on the taller side. While ARAI figures suggest an overall mileage of 18.9 km/l, in real world conditions, the petrol powered Grand i10 should return 12-13 km/l in the city and 14-15 km/l on the highway. 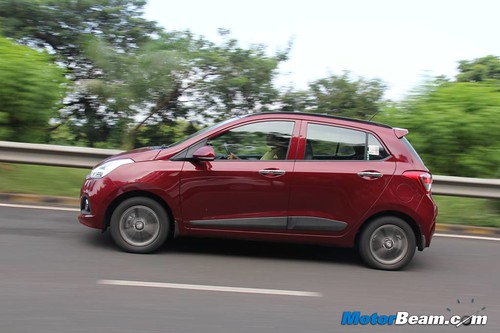 Hyundai has done a commendable job of setting up the suspension on the Grand i10. The company has managed to achieve a neutral balance and the Grand i10 doesn’t feel too soft or too stiff, it just feels right. However it is no driver’s car and the petrol model’s steering offers lesser feel than that of the diesel. At low speeds, the steering wheel is extremely light and that makes driving in crowded city streets a stress free affair. As you gather speed, the steering offers decent feedback and the Grand i10 stays composed at high speeds. Braking performance is good too and stopping power is nothing short of impressive. Ride quality is excellent and both low and high speed ride is compliant with only really bad roads unsettling the car to a certain extent. There is no bounciness and the suspension has that mature feel to it which is mostly found in European cars. 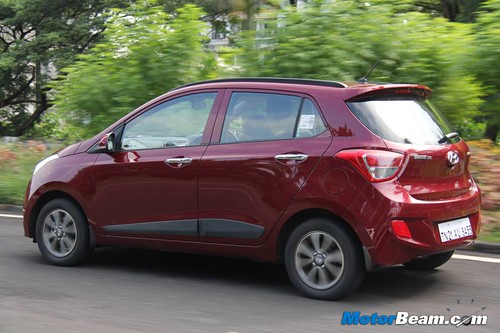 The petrol powered Hyundai Grand i10 is as impressive as the diesel model, offering the best of everything without breaking the bank. Hyundai has truly done the unthinkable, offering so much value to buyers that competitors need to hurry and catch up. Segment first features, good ride quality, excellent interior space, neutral dynamics and frugal engines are mostly what a buyer of this segment wants and Hyundai has gone ahead and delivered in plenty. The petrol unit comes considerably cheaper than the diesel and for those looking for a petrol powered hatchback, there simply isn’t a package as well rounded as the Grand i10. 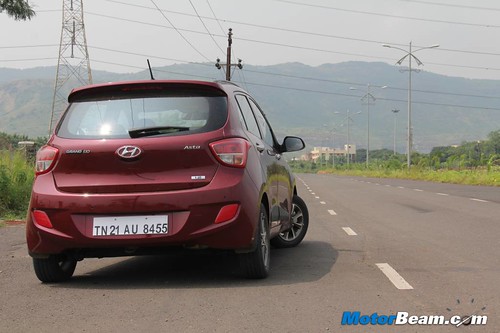 Hyundai To Launch Grand i10 Diesel Automatic On 5th December