The Grand i10 is complete package of space, features, performance and fuel efficiency at a very competitive price.

Hatchbacks are the ones which drive volumes and hence profitability in the Indian automobile industry. Over 70 percent sales come from this body type. Indian consumers have evolved over time and now look not only at value for money prospects but also those cars which are feature rich and add to the style quotient. The above factors considered, Hyundai is one such company which gives the consumers exactly that. Be it the Eon or the i20 the combination of style and features nails it for most customers. The hatchback segment comprises of entry level and compact hatchbacks. Entry level hatchbacks consist of the likes of the Maruti Suzuki Alto, Hyundai Eon, etc. In the compact hatchback segment, it is further divided into compact low, compact mid and compact high. Hyundai has its presence in both the compact low and compact high with the i10 and the i20. It now fills in the space between these with the Grand i10. 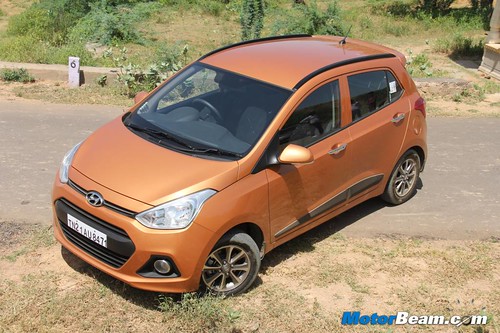 The Grand i10 shares nothing with the regular i10. The only thing common between the two is the name and there is a reason for that. The Hyundai Grand i10 is the new generation i10 globally and has been made on a brand new platform. While it replaces the old i10 in other countries, in India its fits between the i10 and i20, while the regular i10 will continue to sell alongside. Since it’s the new generation i10, Hyundai had to include the i10 in its name as a part of their global policy, thereby the name Grand i10. 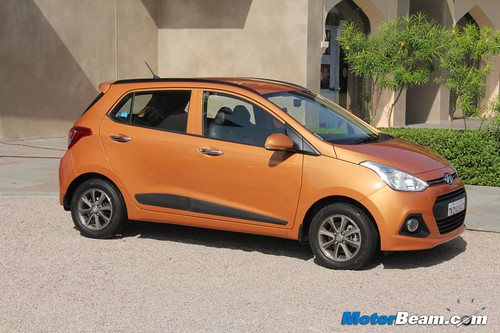 Hyundai launched the Grand i10 in India before the European model (IA) breaks cover at the 2013 Frankfurt Motor Show later this week. We drove the camouflaged car last month in Hyderabad and our first impressions were very positive. This time we drive the Grand i10 in the pink city of Jaipur to review and find out how this new Hyundai will redefine the segment.

Head over to the next page to read about the Hyundai Grand i10’s exteriors.

Hyundai Grand i10 To Get 1.2-Litre Diesel Engine

Hyundai To Launch Grand i10 Diesel Automatic On 5th December