The Maruti Swift is under some serious threat from Hyundai’s Grand i10.

When we first put the Hyundai Grand i10 against similarly priced alternatives HERE, we quickly realised that this Korean car is just superior to its rivals in most ways. After making all other cars in the segment look outdated, Hyundai’s Grand i10 now heads to compete with the king of the hatchback segment, the Maruti Suzuki Swift. While India’s top selling premium hatchback is costlier than the latest kid on the block, the latter is cheaper, offering more features thereby being more value for money. Technically both these cars can’t be compared directly but most buyers are confused between these automobiles and the Grand i10 feels superior than the segment it is positioned in. While Maruti Suzuki sold 16,839 units of the Swift in September, Hyundai managed an impressive 8411 units of the Grand i10 with sales being limited due to supply. Can the Grand i10 challenge the Swift and dethrone its dream run at the top of the charts?

Motor Quest: The Hyundai Grand i10 and Maruti Suzuki Swift both have a long history with the evolution dating back to 1997 and 2000 respectively. Both cars are very popular in India and are export bases for both the companies.

Styling – The Maruti Suzuki Swift is the bigger car here with its length being 85 mm longer, width being 35 mm wider and height being 10 mm taller. The bigger dimensions do make the Swift look bigger and more imposing on the road. The Swift has 15-inch wheels (the Grand i10 comes with 14-inchers) and that gives the car a sporty appeal. The Swift’s styling has that classy feeling to it, the car simply looks attractive in spite of the design taking a retro direction. However the Hyundai Grand i10 holds its own against the Swift. While its exterior dimensions are smaller, the Grand i10 looks purposeful with its high attention to detail and impressive design elements. With so many Swifts on the road, boredom has set in and that helps the Grand i10 come across as the more attractive vehicle of the two. Either way, there is little to choose between both cars in the styling department as looks can be subjective (there are people who simply hate the Swift’s styling while others swear by it).

Interiors – Both the Maruti Swift and Hyundai Grand i10 have very well laid out interiors. While the Swift’s interior is all black, the Grand i10 makes do with dual-tone beige and black interiors. Naturally it’s the Grand i10’s cabin which feels the more airy of the two. Built quality of the Grand i10 is also better than the Swift and the Hyundai simply nudges ahead of the Maruti when it comes to features. Hyundai has truly loaded the Grand i10 which boasts of features like Bluetooth audio system, 1 GB hard drive for music storage, keyless entry, button start, electrically retracting rearview mirrors, one touch driver side window, rear AC vents, rear parking sensors, etc, all of this is missing on the much pricier Swift. The Swift gets climate control and distance to empty which are missing on the Grand i10. The steering wheel of the Grand i10 has a plethora of buttons and the attention to detail is simply better than that on the Swift (automatic turning off headlights and cabin lights when exiting the vehicle).

In spite of the Maruti Swift having bigger dimensions than the Grand i10, when it comes to cabin space, the latter boasts of more room than the former. Hyundai’s clever engineering has paid off well. The Grand i10 has ample room at both the front and the rear while the Swift feels best as a 2-seater. The Swift’s rear seats aren’t that comfortable, legroom is short and the windows are small which amplify claustrophobia. The Grand i10 on the other hand has generous rear seat legroom with big doors and windows and you seldom feel you are sitting at the rear in a hatchback. Even visibility from the rear of the Grand i10 is better and the same can be said about the front too, with rear visibility being excellent for easy reversing. The gear lever is mounted on the dashboard and that liberates quite a lot of space between the front seats and overall the Grand i10 has more storage spaces, the Swift’s only advantage here is the opening cup holder below the left most AC vent for the co-passenger. AC performance in both cars is good but the audio system of the Grand i10 offers better sound output. 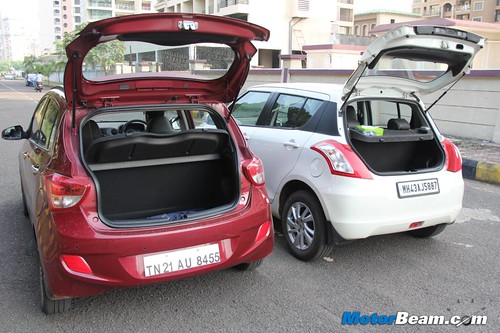 With the Hyundai Grand i10 having smaller dimensions and more interior room than the Maruti Suzuki Swift, you might believe that the latter offers more boot space. Wrong, the Grand i10 wins here too. The Grand i10’s boot is a full 50-litres bigger than that of the Swift and it also comes with a lower loading bay thereby making it easier to put and retrieve luggage. The Swift’s all black cabin makes it appear smaller than it is but being costlier, the Swift lacks so much equipment which is surprising. The Grand i10’s rear seats are better than the Swift but the front’s aren’t bad either, the Swift’s are just better. Overall the Grand i10 easily wins the interior round, beating the Swift easily thanks to its better cabin with longer list of equipment, higher comfort, more space and airiness. 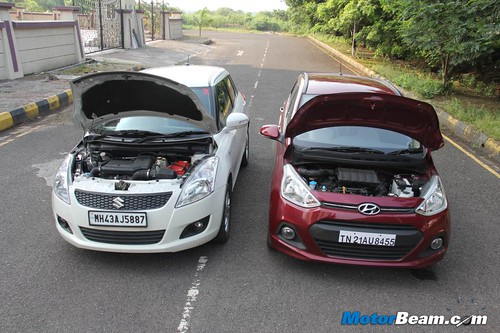 Performance – Both cars come with petrol and diesel engines, mated to 5-speed transmissions. Let’s talk petrol first. Both cars draw power from 1.2-litre, 4-cylinder petrol engines with variable valve timing, belting out 87 PS and 83 PS in the Swift and Grand i10 respectively. Both cars output 114 Nm of torque at 4000 RPM. The Grand i10’s Kappa mill has good low and mid-range response while top-end output isn’t very strong. The Swift on the other hand has crisp throttle response right from the word go. The K-Series powerplant is very refined and loves the redlines. Both cars offer good NVH levels and linear performance but the Swift’s motor and gearbox is slightly better in terms of overall performance but not by much. ARAI certified mileage of the Grand i10 petrol is 18.9 km/l while that of the Swift is 18.6 km/l and thus there isn’t much to differentiate them in the mileage department. 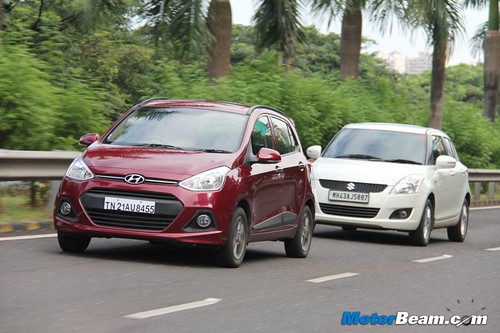 Driving Dynamics – Hyundai has taken a huge leap in terms of dynamics with the Grand i10. However the Swift continues to rule in this department. While the Grand i10 offers better handling and steering feedback than its predecessor, it simply can’t hold a candle to the Swift which is extremely fun to drive offering very good handling and body control. The Grand i10 isn’t bad, its handling is predictable and the steering wheel offers decent feedback too but up against the Swift, you simply realise the Maruti Suzuki to be in a different league altogether. Even the high speed stability of the Swift is better although the Grand i10 fares decently here. 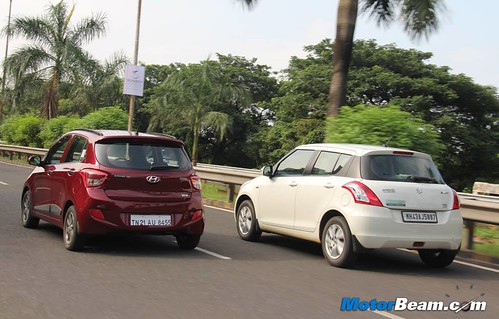 On the ride quality front, the Grand i10 offers a better ride than the Swift. While the Swift can get a bit uneasy over slightly bad roads, the Grand i10 stays compliant. Hyundai has got a good balance of ride and handling which makes the Grand i10 very easy to drive in the city. The steering is extremely light at low speeds which helps in parking. The Swift too has a light steering but not as light as the Grand i10. Both cars come with ABS but it’s the Grand i10 which offers better stopping power and pedal feel. So if you want a good handling car, then the Swift is the one to have but if you are more into comfort and ease of driving, the Grand i10 emerges on top. 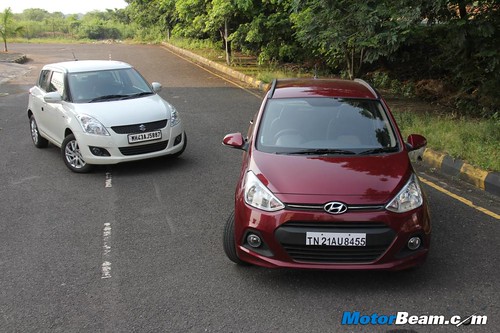 Verdict – Deciding upon a winner between these two hatchbacks isn’t an easy task as both are well accomplished in their own regard. While Maruti Suzuki has created a cult following behind the Swift, the Grand i10 has everything to challenge the company’s dominance. The Swift has the better engines and handles very well too but loses out against the Grand i10 when it comes to value for money. Hyundai has equipped the Grand i10 generously offering more space, better ride quality and slightly more economy at considerably lesser money. The price difference between the top end petrol variants of the two cars is Rs. 40,000/- while the same extends to Rs. 57,000/- when it comes to the diesels (mind you even though the Grand i10 is cheaper, it is better equipped). This puts the win in the Grand i10’s favour and it emerges on top in this shootout.