Hyundai India’s manufacturing unit is world class and churns out a car every 68 seconds.

Established in 1967, Hyundai is the youngest of the top automakers. The fifth largest auto manufacturer globally, the Korean giant is slowly and steadily inching to the top position. The progress has been so rapid that it has got the competition worried and some of the Japanese companies have been quite vocal on the same subject. In India too, Hyundai is known to make quality cars and has been churning out new models in quick succession. Styling is one frontier the company mastered with its fluidic design philosophy. In less than a year, Hyundai has launched the Grand i10, Santa Fe and the Xcent, all of which have created quite a stir in their respective segments. What makes Hyundai so successful? We visit their state of the art plant in Chennai and find out. 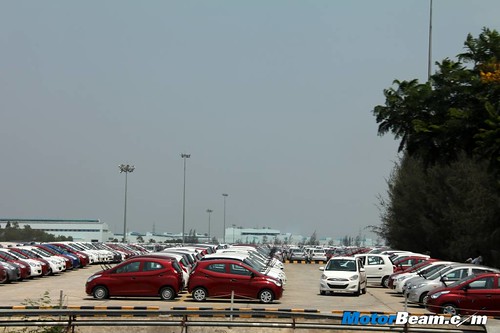 At any given point of time, more than 25,000 cars can be parked before dispatch

Hyundai Motor India is the second largest car producer in the country with nearly 21% market share, which continues to increase. The company started work on its 535 acre land in Sriperumbudur, on the outskirts of Chennai in 1996 and rolled out the first car in just 17 months from ground breaking. Today, within the same premises, Hyundai runs two plants, the second of which commenced operations in 2007. This state of the art facility rolls out nearly 6.3 lakh cars annually (working in three shifts 24×7). 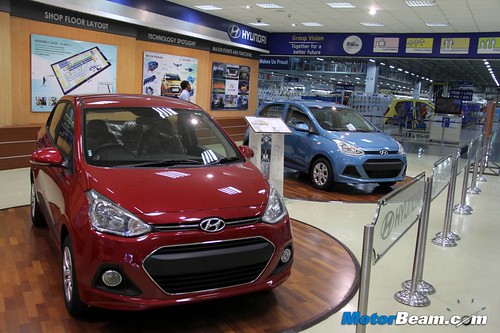 The Sriperumbudur facility exports cars to more than 120 countries globally

Hyundai is also India’s largest exporter and supplies cars to more than 120 countries around the globe of which the majority are shipped to Africa, Europe and South America. The Korean company employs over 9500 people and currently has 369 dealerships with 867 sales points and more than 1000 service outlets across the country. The plant in Chennai is a fully integrated unit with its own foundry, press, paint, body, assembly, engine and transmission units. Hyundai is not only the largest investor in the state of Tamil Nadu but also one of the largest employers. Behind the success of the company is the welfare of its employees and vendors. Hyundai runs four full fledged canteens which dish out 22,000 meals a day. The company provides best in class welfare measures and international working environment for its employees. Along with this, Hyundai also runs various development programs and a 24×7 medical centre for its workers. 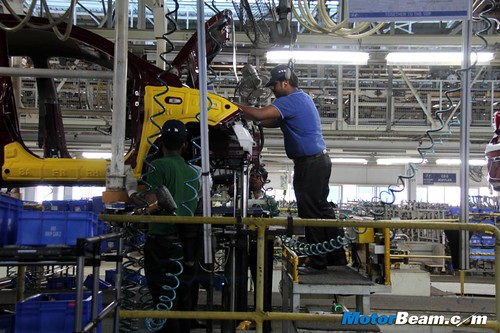 Hyundai uses the services of 119 vendors, both local and Korean

The company uses the services of 119 vendors. 66% of the parts are sourced from both Indian and Korean vendors while 34% are directly made by Hyundai. Engine parts, body parts, headlamps, seats and AC are sourced from 42 Korean vendors while 77 local vendors cater to muffler, steel wheel, battery, accelerator and alternator. Of the two plants, Plant 1 produces the Accent (for export), i20, Elantra, Santa Fe and Sonata while Plant 2 manufacturers majority of the domestic and export models such as i10, Grand i10, Verna and Xcent. The i20 can be made in both plants. 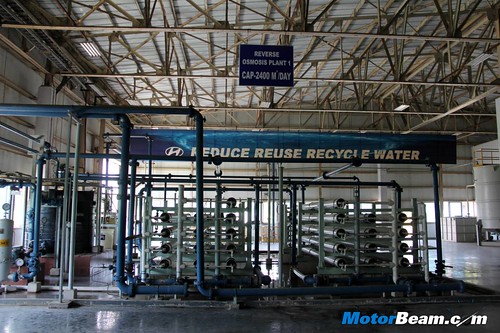 Environment conservation is priority for Hyundai and the company follows eco-friendly manufacturing practices for reduced energy consumption and conservation of natural resources. The company has a zero discharge policy and recycles 100% of waste water through various processes. The in-house reverse osmosis plant has a capacity of 2400 kilo litres per day. Effluents processed with treated water are re-utilised for in-plant processes while treated sewage water is used for landscaping. Hyundai has a green belt in and around the plant covering an area in excess of 90,000 sq meters with more than 20,000 tress and 35,000 saplings. Waste sludge from the paint shop is sent to cement industries for co-processing. 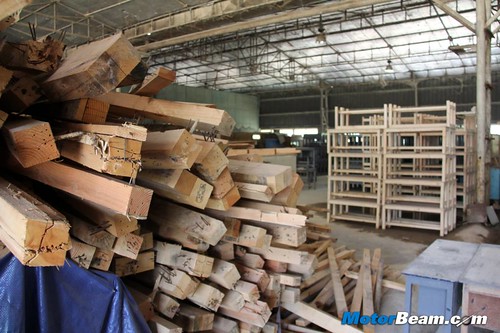 The company also practices rain water harvesting in four ponds around the plant with a combined capacity of 2.75 lakh kilo litres. Waste wood which comes in the form of crates is made into in-house furniture. Hyundai has till date donated more than 32,000 benches to schools for the underprivileged. Hyundai also works towards energy conservation through various practices which include use of energy efficient T5 lamps and energy efficient motors in the production process. Online monitoring and auto switch off for electrical system saves power consumption while natural sources of energy such as solar energy are used for water heating and office lighting. Street lights in and around the plant use LEDs. Besides this, Hyundai also undertakes road safety projects such as Hyundai driving school and driving academy and student traffic volunteer program. Other programs include community development, educational and arts and cultural events for the welfare of workers. 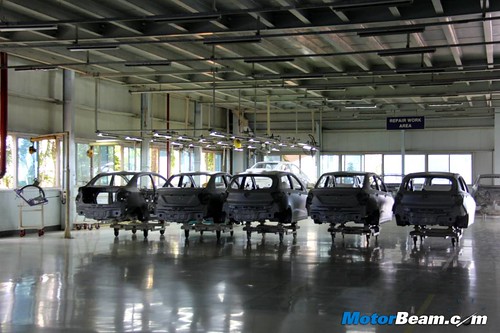 The welded shell is ready to move to the paint shop

These parts which have come out from the press shop undergo the welding process which is done majorly by robots in quick time. Certain areas which are inaccessible need human intervention but more than 90% is done without human involvement. The robotics achieve nearly 100% accuracy and each and every step is closely monitored by supervisors. Safety is given prime importance and workers are equipped with fire resistant clothing and associated gear. The discipline seen on the line deserves a mention. After the welding is completed, the shell moves to the paint shop. 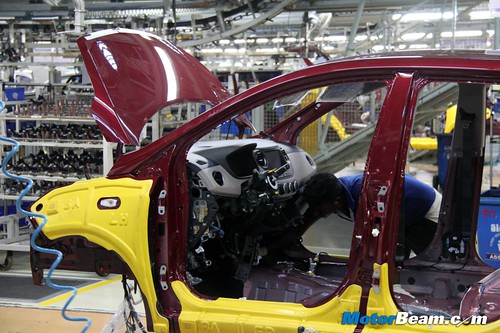 In the assembly line, various components like seats, etc. are fitted on a moving conveyor

In the paint shop, the shell is first treated with a primer after which it moves along the conveyor to the paint booth where robots paint the car in quick time. The process is so advanced that painting is not done in colour batches, which means that the entire colour range can be painted along the same line. The nozzle can change colour without any interruption making the process continuous. The paint shop is completely automated and the car then moves to the assembly shop. In the assembly line, the seats, dashboard, headlamps, tail lights, etc. are bolted into the cars after which the body and chassis unite. The engine and transmission join the vehicle and the car is then ready for final inspection. After this, there is a shower test to ensure there is no leakage and a quick spin around the test track to ensure everything is perfect. At every step there are various quality control measures ensuring that top quality is maintained through the entire process. Hyundai assembly line is so advanced that at the same time different models can be manufactured on the same line. Moreover the line is capable of handling both LHD and RHD versions at the same time. 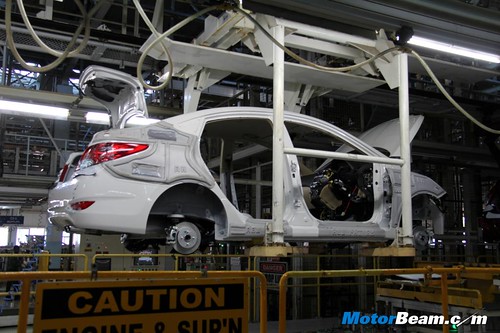 Advanced assembly line can produce all models on the same line, one after the other

Hyundai manufacturers more than 100 variants in both the plants. Managing the component supply for this massive manufacturing process can be a painstaking task but is it? Well, no. Hyundai uses a computerised system which enables the components to be supplied in a sequential manner in accordance to the production plan. At any given time, the vendors are aware of the production plan and the components are supplied parallel to the car being manufactured. For example, when a LHD Grand i10 moves along the conveyor belt, at every station, the corresponding part is already available for fitment based on the variant being produced. 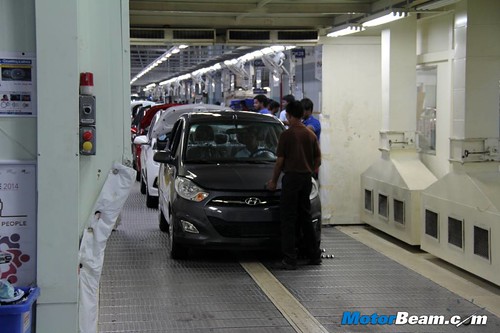 At the end of the line, the vehicle is ready to be driven out and put through the road test

Such advanced process ensures a car rolls out of the plant every 68 seconds. It’s no surprise then, as to why Hyundai is the largest automobile exporter in the country. Another point of note is that Hyundai uses the same materials for domestic and export cars thereby maintaining the same levels of quality globally. Hyundai’s focus on quality and producing world class automobiles goes along with its philosophy of making the world cleaner, greener, safer and better, which blends perfectly with its tagline ‘Live Brilliant’.