Indians probably went gaga on that day in 2011 when Mahindra launched the XUV500 for the first time. The Cheetah appealed to a lot of people, so much so that dealers were as crowded as Big Bazaar on Wednesdays and to control all this mayhem, Mahindra had to incorporate a lottery system for customers of this SUV. Sure, the vehicle wasn’t perfect and had a lot of glitches. But, time and again, Mahindra has proved that they mean business by ironing out most of the issues and also by bringing in a freshly updated version of the SUV in 2015. There was just one thing missing and that was an automatic gearbox. Mahindra then launched the XUV500 Automatic and while we did a crisp first drive report the day it was launched, we finally got around doing a detailed test on this behemoth.

MotorQuest: The Mahindra XUV500 is one such vehicle that is selling well in urban as well as semi-urban areas. Mahindra has a huge fan following in Tier-2 and Tier-3 cities and since people are getting richer day by day, their choices for vehicles are also improving. 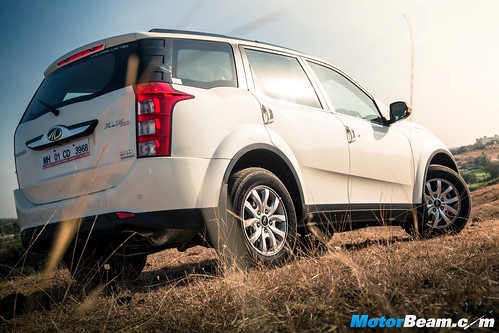 Exteriors – The exteriors of the Mahindra XUV500 got a major rejig in 2015 when the facelift was launched. The automaker gave the SUV a new pair of headlights and refreshed tail lamps, new bumpers, redesigned grille and bonnet, and some more minor tit-bits. The styling in the automatic version remains exactly the same and there are no changes at all, keeping aside the small Automatic badging that is stuck on the boot lid. The XUV500 automatic is offered in the same colours as the manual variant and continues to boast of immense road presence too. 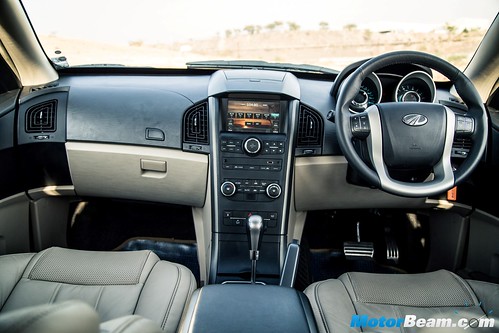 Interiors have oodles of space, lots of features on offer

Interiors – The interiors also remain fairly unchanged except of course the new gear selector and the pedals. The equipment list remains largely unchanged but what the SUV now misses out on is the engine start-stop button, something that is present on the manual versions of the vehicle. The 6-way adjustable seats are very comfortable while the sunroof lends an airy feel to the cabin. The projector lamps have an excellent throw and the cornering lights work well. The infotainment system packs in a lot of features but the screen could have been more responsive. There is excellent space inside the cabin with lots of room and a number of cubbyholes. 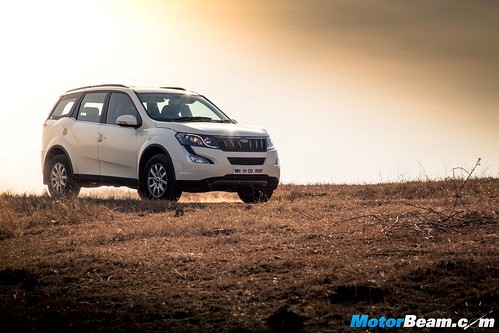 Performance – The Mahindra XUV500 is powered by a beast of an engine, which is the 2.2-litre mHawk oil-burner. The powerplant puts out 140 HP of power at 3750 RPM and 330 Nm of torque between 1600-2800 RPM. The engine has been mated to a 6-speed automatic transmission which is sourced from Aisin. This gearbox is also the same one that is used on the SsangYong Tivoli. The engine feels very responsive right from the moment when you first step on the gas. Turbo lag is a bit pronounced but the car gets going from low RPMs nonetheless. 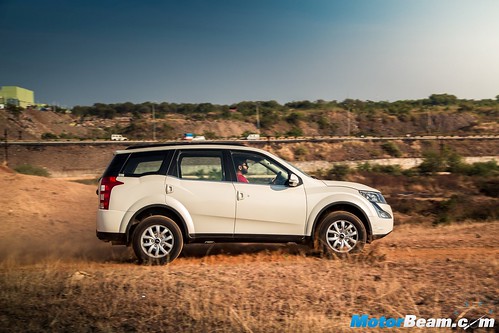 The turbo starts spooling in from a shade above 1500 RPM and post that the motor is super aggressive when you go full throttle. In fact torque is delivered so powerfully that the XUV500 has a lot of wheelspin and torque steer while taking off on full throttle. In 6th gear, the vehicle touches 100 km/hr at 2200 RPM while the run from 0-100 km/hr takes 12.73 seconds for the automatic FWD variant that we tested. Thanks to the punchy engine and good ground clearance, the XUV500 performs nicely off the road too while the AWD system is another boon to have. 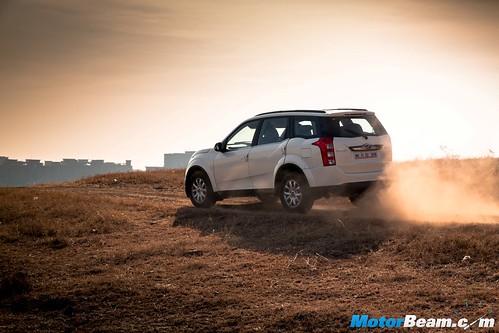 The gearbox is nicely calibrated, is decently smooth and quick

Talking about the gearbox, it is very smooth in its operations and shifts gears quickly. Sometimes it delays operations by a couple of seconds but overall it is a brilliant unit. The XUV500 misses out on paddle shifters but you do get a manual mode which can be used through the buttons provided on the gear lever itself. With regular driving, the gearbox upshifts at 1500 RPM while if you drive with full throttle, the gearbox is likely to shift gears at a notch below the 4000 RPM mark, irrespective of D or M modes. The fuel efficiency has gone down though and our test car returned around 9 km/l under mixed driving conditions. 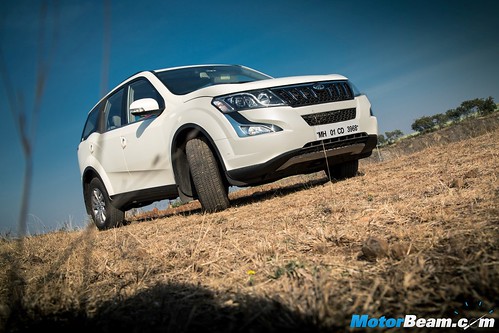 Driving Dynamics – The ride quality on the Mahindra XUV500 is pretty good and it absorbs bumps with fair ease. The ride isn’t the best one out there though and could have been better. Mahindra had tweaked the anti-roll bars, dampers and springs when the facelift came out. The SUV is built on a monocoque chassis and has good handling characteristics but there is some body roll present too. The steering is tuned to give decent feedback but it becomes inconsistent over different speeds. The SUV does stay nicely planted at high speeds and even the tyres have extremely good levels of grip. Braking performance is also more than satisfactory on the XUV500. 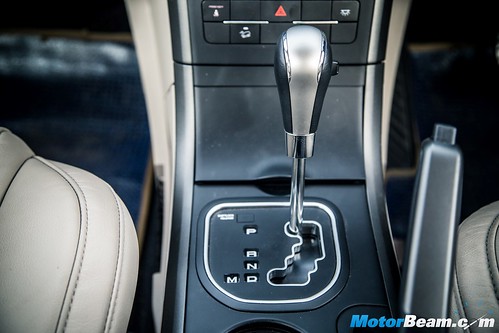 The XUV500 has excellent kit for the price, good service network too

Safety and After Sales Service – The Mahindra XUV500 gets safety features like dual front, side and curtain airbags, ABS, ESP, Rollover Mitigation, Hill Hold and Hill Descent Control. The vehicle also secured a 4-star rating in the Australian NCAP. Talking about service, Mahindra has a vast network across the length and breadth of the country and the automaker has shown a very good level of commitment in solving issues pertaining to their vehicles and customer service. 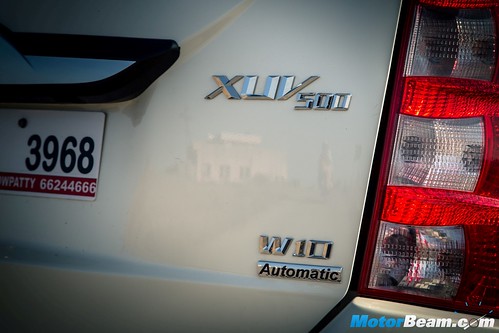 Verdict – There is no doubt that the Mahindra XUV500 is an excellent package. The addition of the automatic gearbox is like a cherry on the cake. For people looking out for a 7-seater automatic SUV, the XUV500 makes perfect sense and even though the automatic trims are priced at a premium of approximately Rs. 1 lakh over their manual counterparts, it still feels worth every extra penny. The facelifted version has also ironed out a lot of issues of the previous model and the long list of equipment is sure to keep you happy. The fact that there is no other automatic 7-seater in this price bracket makes things even easier for this SUV.

The current Mahindra XUV500 has improved in leaps and bounds over the pre-facelift model. Mahindra has worked quite hard to fulfil customers’ requirements and the company even takes feedback rather seriously. 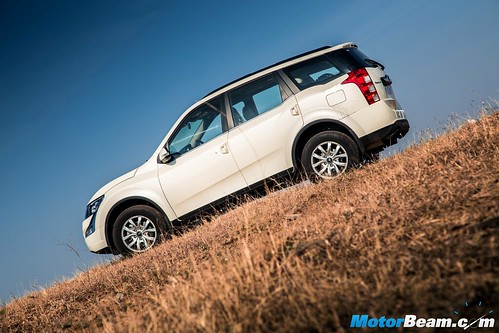 * Excellent road presence, the facelift looks much better
* Oodles of space inside the cabin, long list of features too
* Smooth gearbox and responsive engine

* Certain bits lack the finesse that is offered by rivals 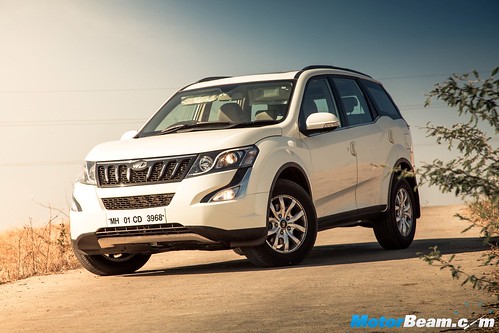 “The Mahindra XUV500 keeps getting better which shows how keenly the company listens to feedback. A full-size automatic SUV was long awaited and while there are more expensive options in the market, Mahindra has done a great job by offering AT on its big SUVs. The gearbox itself is good, the XUV500 having more than enough performance while also being loaded with equipment and comfort.” – Faisal Khan, Editor, MotorBeam.
“It is good to see an automaker like Mahindra taking customer feedback rather seriously. People have been asking for an automatic gearbox since quite a while and the firm finally launched it. The gearbox is a very good unit and performs its tasks smoothly. Overall, the XUV500 is a very good package now and no other 7-seater in this price bracket comes close to it. The Hyundai Creta is a good competitor but well it is a 5-seater.” – Parth Gohil, Road Tester, MotorBeam.