With the Triber, Renault has brought a practical seven-seater with great space and a frugal petrol engine to the masses

Compact SUVs are the in thing but has anybody heard of a compact 7-seater? Chances are you probably hadn’t before the Renault Triber came in. Well, Mahindra had already tried the under 4-metre, 7-seater formula with the TUV300 but it didn’t work. There were two main reasons for that, the jump seats were a compromise and it wasn’t comfortable. However, Renault seems to have addressed all these issues in the Triber, which promises genuine 7-seater capability in the below 4-metre shell. Will the Triber be popular in these testing market conditions? We find out.

Motor Quest: The Triber is underpinned by the CMF-A+ platform which is substantially larger and is a modified version of the CMF-A platform on which the Kwid is based. This platform is wider and has a longer wheelbase. In fact, Renault says that part sharing is so minimal between these two platforms, that it is almost a completely new platform. 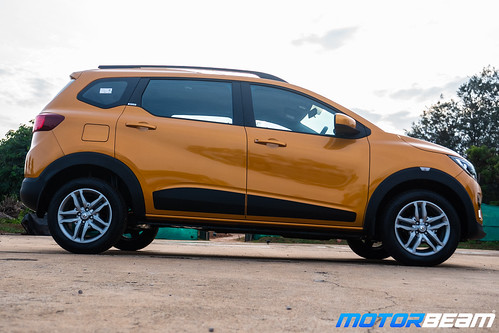 Renault has used various SUV elements in the Triber’s design

Exteriors – The Triber does look much better in person than in photos. There is no mistaking it’s a Renault, lots of design elements are in sync with its siblings. It gets an SUV nose with many SUV inspired elements like roof rails, black side cladding and skid plates. You get projector lamps and DRLs at the front and wrap-around tail lamps at the back. The roofline rises as you move towards the rear (to ensure adequate headroom for rear passengers), however, it has been very cleverly masked by the roof rails. Overall, Renault has managed to ensure the car doesn’t look boxy or boring.

The Times When Corona Was Just A Toyota

There are good car movies and then there are Bollywood car movies. The ongoing corona virus pandemic has been making most of us stay at home and   END_OF_DOCUMENT_TOKEN_TO_BE_REPLACED

TVS Young Media - Final Race An idea coupled with action will always get better results than expectedThe second race at MMRT was a blast, coming in   END_OF_DOCUMENT_TOKEN_TO_BE_REPLACED

Enthusiasts have a couple of really good choices in the D-segment sedan with the BMW 330i and Skoda Octavia RS. Ever since the price gap   END_OF_DOCUMENT_TOKEN_TO_BE_REPLACED