Recently, a few pictures were leaked where we could see a scrambler-type modified version of the Royal Enfield Bullet. But then as the motorcycles are open canvas, everyone thought it is just an outside modification. However, this was not just any local modification but an all-new type of motorcycle that Royal Enfield has now introduced calling it the Bullet Trials. Available in both 350 and 500, Royal Enfield invited us to experience this motorcycle in 19 Degree North, an off-road adventure park in the midst of Aamby Valley, Lonavala. Let’s see what makes these motorcycles so special, shall we? 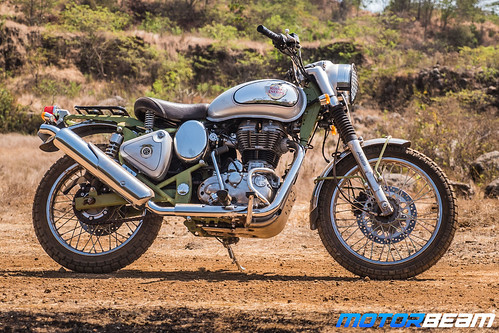 Styling – A quick glance and everyone will mistake the Trials as a modified Classic and it is very much so! The chassis, headlight, tank and the engine resemble a lot to the regular Bullet or Classic. But it has some differentiating elements like a redesigned and sturdy handlebar and the chassis is exposed with a different colour along with getting off-road spec tyres and a different suspension up front. The upswept exhaust and a single seat setup with luggage rack at the rear make it look a lot more purposeful. The test bike was loaded with off-road accessories like a bash plate, headlight grill and a 48 logo on the side box. 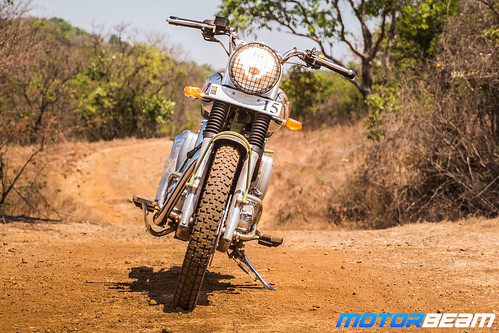 The Bullet Trials is also quite sleek!

To keep things rugged and tough, there are no LEDs on the bike while the indicators and the tail light look very similar to the ones on the Interceptor 650. The off-size spoke wheels look good with the off-road rubber. The rear gets a pair of gas-charged shocks mounted onto a stronger and thicker swingarm. While the Trials is available only in a single colour, for now, the colour change happens with the chassis. The Trials 350 gets a red coloured chassis while the Trials 500 gets it in green colour. As the 500 begs to be premium, it gets some chrome on the tank while both the motorcycles get brown seats in a classic triangular design. 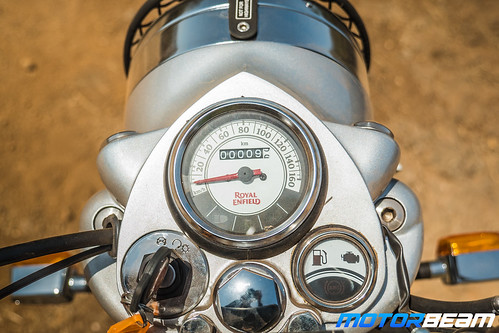 Instrument Cluster and Switchgear – The instrument cluster on the Bullet Trials is very basic and it is the same unit that we have been seeing on the Bullet and Classic series. The cluster displays the primary information like the odometer and speedometer. The amp meter section is replaced with a low-fuel indicator and an engine light. There is no more information on offer but then if you are going trail-riding, you actually don’t need anything else. However, a fuel gauge would have come in handy. The switchgear is also carried over from the existing motorcycle and as it is an AHO unit, it gets only a starter button and an engine kill-switch on the right while the left unit has the passing light, a horn switch and an indicator switch. Alongside comes a choke switch, which I am still unsure why would an EFI bike require.

There are good car movies and then there are Bollywood car movies. The ongoing corona virus pandemic has been making most of us stay at home and   END_OF_DOCUMENT_TOKEN_TO_BE_REPLACED

TVS Young Media - Final Race An idea coupled with action will always get better results than expectedThe second race at MMRT was a blast, coming in   END_OF_DOCUMENT_TOKEN_TO_BE_REPLACED

Enthusiasts have a couple of really good choices in the D-segment sedan with the BMW 330i and Skoda Octavia RS. Ever since the price gap   END_OF_DOCUMENT_TOKEN_TO_BE_REPLACED