These two vehicles are the cheapest cars in India but very different in character.

First car is always special, no matter what make it is. The joy of holding the steering wheel for the first time on a car you own can make you grin from ear to ear. For the first time car buyer, there are plenty of options in the entry level segment. However the most sold car is the Maruti Suzuki Alto while the most popular and talked about is the Tata Nano. Both these cars are ideal to learn driving on because their spare parts are the cheapest and they are extremely easy to drive. The Alto has stamped its authority in the A-segment but can the world’s most affordable automobile challenge it? We pit the 2013 Tata Nano with the Maruti SUzuki Alto 800 to find out if the extra cash for the Japanese samurai is worth it or not.

Motor Quest: The Alto was first launched in 1979, the second generation model was known as 800 in India and the Alto 800 is the fifth generation model (2 generations behind the latest gen Alto, better known as the A-Star). The Tata Nano is in its first generation and is 4-years old, compared to the 13-year old Alto. The Nano project started in 2005 and took 3 years for completion. 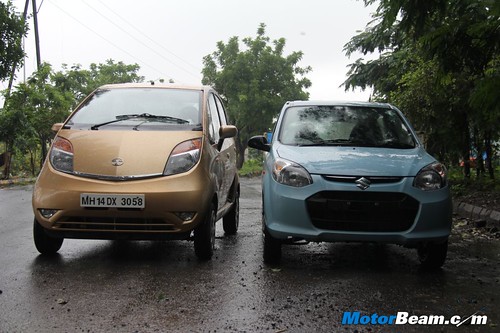 Styling – The old Alto looked decent but the Alto 800 has very confused styling which may not appeal to most buyers. Many styling elements on the Alto 800 are lifted from other cars and the end result is an exterior with no balance or symmetry. The Tata Nano on the other hand is a very cute car which looks balanced from all angles and doesn’t look like a cheap car. While the Maruti Alto 800 is significantly longer, the Tata Nano is wider and taller and this gives the Tata vehicle a very tall boy profile. The small wheels on both cars look awkward but it’s really the evident cost cutting on the Alto’s exterior which makes the design look cheap. There is no left side mirror or fog lights and the right side mirror is not body coloured. The antenna is a pull out type and not a fixed unit like in the Nano. Even the B-pillar in the Nano is blackened out and there is a rear spoiler too (both are missing in the Alto 800). The Standard and LX variants of the Alto lack body coloured bumpers and full wheel covers which make it look cheap again. Thus amongst the two, it definitely is the Tata Nano which looks more appealing, thanks to its chrome inserts which don’t make it look like an automobile built to a price.

Interiors – The interiors of the Alto 800 feel better put together and look more appealing too. While the Nano feels the more airy of the two (thanks to the beige cabin and large windows), it’s the Alto 800 which feels less cheap on the inside. The centrally mounted instrument cluster on the Nano looks a bit out of place and the all black steering wheel looks very plain (the Nano gets all black interiors when the exterior is painted in Dazzle Blue colour). Both cars have digital odometers with a trip meter (the Alto 800 has two) and the Nano comes with a single wiper blade where as the Alto comes with two. Where the Alto loses out is in terms of features, the Standard and LX variants of the Alto lack front power windows while the LXi doesn’t even get an audio system. The VXi variant does get an audio system (with 2-speakers while the Nano gets 4) but doesn’t have Bluetooth capabilities, which is present in the top-end Nano CX. While the Nano gets both side mirrors, the Alto gets only the driver’s side (VXi gets both sides) but it is internally adjustable, which is missing in the Nano. The Nano gets twin glovebox but the Alto’s single glovebox is big enough to give almost similar levels of storage. The Nano gets central door locking, the Alto 800 doesn’t (the VXi variant gets it) and both cars have horrible pull/push type door lock/unlock knobs.

The Maruti Alto 800 is a longer car but in spite of that, it’s the Tata Nano which has more interior room. The tall boy design of the Nano means the view from inside is extremely good and you sit relatively higher compared to the Alto 800. The seats of the Nano offer better comfort than the Alto 800’s which are too thin and clearly feel like they are made to a price. While the Nano has adjustable front headrests, the Alto 800 has fixed. The Maruti lacks headroom at the rear but the Nano has plenty of headroom all around. Considering this, the Nano is a usable 4-seater vehicle but the Alto is best driven with only the front seats occupied (tall passengers won’t even find the front seats comfortable). The Alto 800 lacks a power socket (VXi gets it) but the Nano comes with one as standard. Both cars have good AC units. The Nano’s rear hatch door doesn’t open and one has to flip the rear seats to access the boot, very inconvenient. The Alto’s boot is bigger too at twice the size 177-litres, compared to the 80-litres boot capacity of the Nano.

Performance – Till now the Tata Nano was inching ahead of the Maruti Alto 800 thanks to its better styling and feature loaded cabin with more space. However the Alto 800 trumps the Nano when it comes to performance and there is no rocket science involved. Powering the Tata Nano is a 624cc, twin-cylinder engine which produces 38 PS of power and 51 Nm of torque, mated to a 4-speed manual gearbox. The Alto 800 uses a 796cc, 3-cylinder engine which produces 47.5 BHP of power and 69 Nm of torque, coupled to a 5-speed gearbox. Thus the Alto 800 is not only more powerful, it has a cylinder and gear extra which does show in its performance. The Alto 800 is more than 7 seconds faster in the 0-100 km/hr sprint and has a higher top speed by more than 30 km/hr. 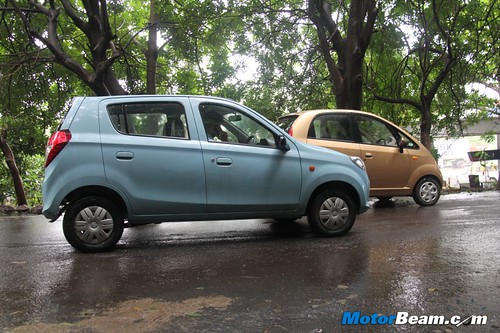 Don’t go by the figures alone, the Tata Nano is not a sluggish car at all but the Alto 800 is just faster and better in terms of performance. Not only is the Alto’s engine more refined, it has very little vibrations too while the Nano’s motor does tend to vibrate quite a bit and doesn’t sound pleasing either. Neither motors are jerk free but both offer peppy performance for city driving (the Alto is peppier). The Nano’s lack of grunt doesn’t make it a car you would like to drive on the highways while the Alto is just about manageable with enough thrust to comfortably cruise at triple digit speed. The Tata Nano is the more frugal of the two and will return at least 3 km/l more mileage than the Alto 800. However the Nano has a 15-litre tank and the Alto 800 has a 35-litre tank which means you will head to the fuel pump more often in the Nano. Both cars come with light clutches and smooth shifting transmission but the Alto feels much more refined. Maruti Suzuki offers CNG variants of the Alto 800 and Tata Motors will soon launch the Nano CNG emax. 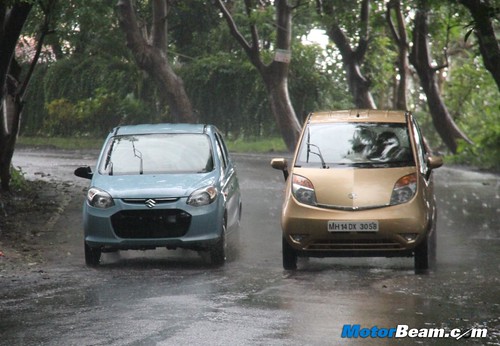 Driving Dynamics – Both these cars are poles apart in terms of drivetrain. The Nano is a rear-engine car where power is channelled to the rear wheels. The Alto 800 is a front engine, front-wheel drive vehicle. While the Tata Nano weighs around 70 kgs less than the Alto 800 (depending on variant), neither car is heavy and utilises a basic suspension setup. You can’t buy the Nano with power steering but you can get the Alto 800 with power steering which does make life very easy in the city. Granted the power steering variant is much more expensive (available in LXi) but at least one has the option of an assisted steering in the Alto. The lack of power steering in the Nano makes the wheel very heavy at parking speeds and there is little feedback and high inconsistency at speed. 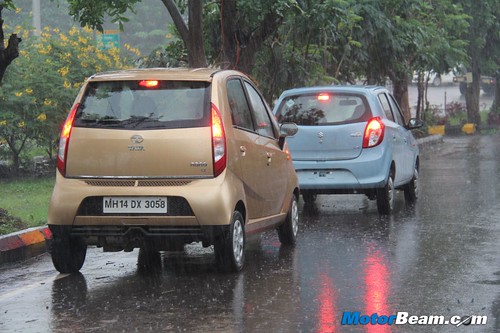 In terms of handling, the Alto 800 handles decently well but the Tata Nano is the more fun car with its go-kart like handling putting a smile on your face. The low weight and grippy tyres give you confidence while pushing hard although there is body roll. The Nano has a smaller turning radius too (4 vs 4.6 metres) which makes taking tight turns easy. The Nano runs on 135/70/12 and 155/65/12 tyres at the front and rear respectively. The Alto 800 runs on 145/80/12 rubber and the higher profile tyres and gas filled shock absorbers do help in giving a better ride quality than the Nano. However both cars are easily ruffled by bad roads and big potholes. Both offer decent stability at speed. Where the Alto 800 again shines is the braking performance, it stops well and quickly but the Nano lacks bite and the pedal feels a bit spongy too. The Nano comes with all drum brakes but the Alto 800 gets discs at the front which inspires confidence while stopping. 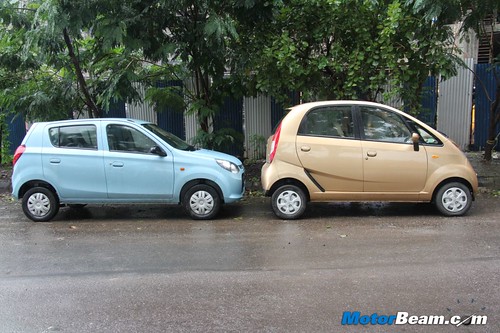 Cost of Ownership – For a first time car buyer, the cost of upkeep of the vehicle is also a crucial factor. The Alto 800 is the fourth cheapest car to maintain as the Hyundai Santro and Eon are even cheaper in terms of service parts. But it’s the Nano which is not only the most affordable car in the world but also the cheapest to maintain. All its service consumables are cheaper than the Alto 800 and that too by a significant percentage. It’s only some mechanical parts which are more expensive but they are not regularly needed. Thus the Nano is overall the cheaper car to run and maintain. 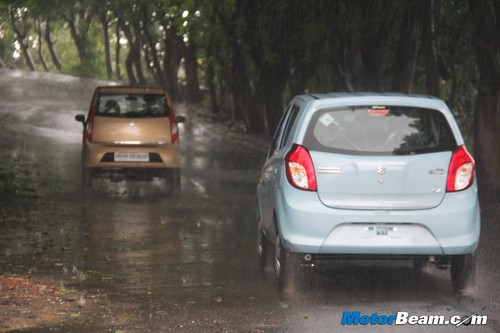 Verdict – It’s quite clear who the winner of this shootout really is. For an entry level car buyer, cost plays a vital role and although the Alto 800 looks like a value for money proposition, the Nano simply blows it away in the VFM game. The Alto 800 does have a better engine and more appealing interiors but when you factor in the higher price and lack of features, things start going in the Nano’s favour. Many features (power steering, audio system, etc) are only available in the LXi and VXi variants (non-airbag) which are priced at Rs. 3.71 lakhs and 3.81 lakhs respectively. The base Nano starts at Rs. 1.90 lakhs and goes up to Rs. 2.65 lakhs (all prices on-road, Mumbai), thereby being more car for your money. Spending Rs. 1 lakh plus for a better engine doesn’t make sense unless of course you want power steering as there is no option of it in the Nano. You might not get the performance of the Alto 800 in the Tata Nano but what you do get is plenty of pep for city driving, good interior room, loads of features and a mouth watering price tag, all of which tip the scale in Tata Motors’ favour.

For a first time car buyer, the Tata Nano definitely makes more financial sense, as it is not only cheaper, but better in many parameters as well. 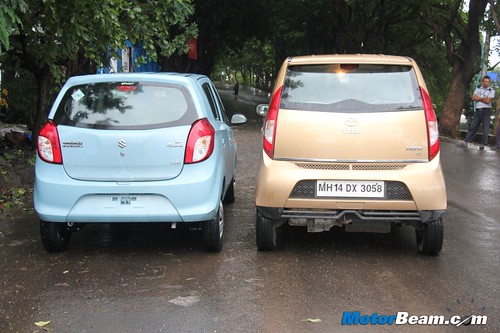