The new Corolla seems impressive but its rivals are equally good on almost all aspects.

The D-segment is the most popular segment worldwide and a quick glance on the most selling cars list will show you that people the world over are mostly buying a car from this class. This undoubtedly proves the point that D-segment vehicles are well accomplished and thus putting them against one another can be quite a daunting task. Last time around, we pitted the new Skoda Octavia against the Volkswagen Jetta and Hyundai Elantra, the Czech vehicle won the accolades. This time around, there is tough rivalry from Japan, in the form of the all new, eleventh generation Corolla, a vehicle which looks very promising on all fronts, it’s a car which seems un-Toyota like with very little signs of evolution being visible. 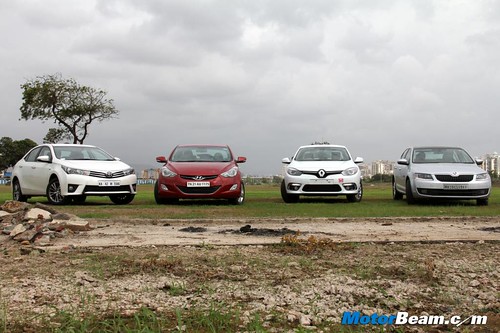 All these four cars are well accomplished and terrifically engineered products

The Hyundai Elantra has been the leader of this segment but can it hold onto its own against the massively impressive Toyota Corolla Altis. This is not the first time the Elantra is facing a head-on battle from the Corolla, in fact, in the early 2000s, there was cut throat competition between the Corolla, Elantra and Octavia, all cars being a couple of generations down than what we see today. Joining us from Europe is Renault’s Fluence, a vehicle which just doesn’t get the praise it deserves. With Honda discontinuing the Civic, Volkswagen planning to launch the mid-life facelift of the Jetta and GM already having unveiled the next generation Cruze, we had to keep this shootout to the four cars which are here to stay as it is.

Motor Quest: While Toyota first launched the Corolla way back in 1966, Hyundai only started making cars in 1967. Still the Elantra has won the North American car of the year and given the Altis a tough fight the world over, the first gen dates back to 1990. The Fluence is the newest car in terms of history with Renault first launching it in 2009. The Skoda Octavia is the only car here whose all generations have been sold in India, the current model is in its third generation.

Styling – A D-segment car should look the part and that’s where it is very difficult to choose one winner. All these four vehicles look distinctly different as all belong to different countries; Japan, Korea, France and Czech Republic. Thus with different countries of origin, their design also has a very different flavour. The Renault Fluence has a very unique identity, it’s nothing like any other car on the road, not even baring any resemblance to its siblings on sale in India. Meanwhile the car which carries forward design cues from other members of the family, is the Skoda Octavia. Remove the badges and a layman will confuse the vehicle to be some other Skoda, so no real striking identity but an appealing car none-the-less. Meanwhile the Octavia and Fluence are the only cars here which get LED daytime running lights. 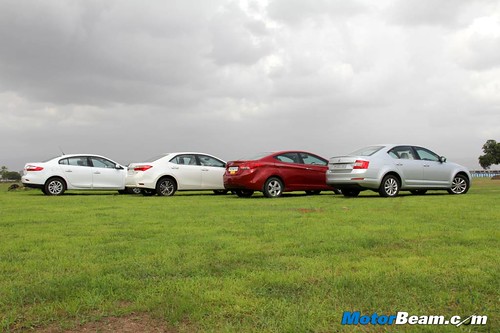 This brings us to the two cars which stand out the most, the Hyundai Elantra and Toyota Corolla, all boiling down to what you like. The Corolla isn’t bland in appearance like Toyota’s are known for, gone is the boring styling seen on almost all the past ten generations of the car, the new one is Lexus inspired, baring a very striking exterior. The way the headlights merge into the grille and the Camry inspired rear, gives it quite the presence. Yet, the Elantra which is already three years old manages to gather as many stares, if not more. The Fluidic design language grows on you so well that it keeps impressing you every time you see it. While the Corolla is more about straight lines, the Elantra has the curves and is our pick in the design department.