Tata Motors’ latest products, the Bolt and Zest are doing decent numbers but they haven’t managed to put the sales chart on fire for the company. Many wonder as to why the Zest and Bolt don’t sell as much as its rival, in spite of them being very good products. Well, on further research, we did get some answers. The Zest did get off to a good start but sales didn’t sustain at the same levels because the USP of the car was hampered by the company itself. Yes, the value for money quotient of the Zest took a hit when Tata Motors silently removed alloy wheels from the mid-level trim and also discontinued the 333 maintenance plan. But this a Tata Bolt review and after driving the car, we are quite confident it won’t shake rivals like it should, in spite of it being an excellent product. 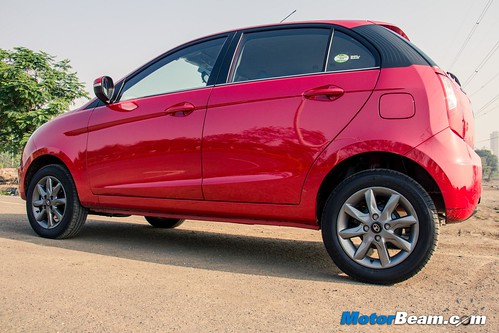 The Bolt features an unmistakable link to its predecessors, the Indica and Vista

Exteriors – Looking at the above picture, can you guess which car are we talking about. Of course you can and you would have even if this picture was the only thing you saw on this page. The Bolt has a striking resemblance to the Vista and that’s not really a good thing, it just robs away the “all-new” tag from the vehicle because people perceive it to be an updated car, rather than being an all new model. Yes, there are design elements which we really adore on the Bolt like the piano black finish under the grille, projector headlights, matte finish on the alloys, blackened C-pillars which give a floating roof like appearance and the tail lights which make the rear look quite like a MINI Cooper. But there is no denying, the Indica and Vista silhouette which is less evident on the Zest is quite evident on the Bolt. 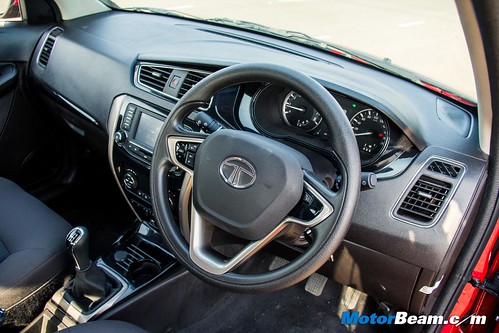 Easily the best cabin of any Tata car, the Bolt’s dashboard has good quality and feel

Interiors – Step inside and all thoughts of the old Indica or even the Vista vanish immediately because the cabin is all new except the door pads and the power window switches on them. When Tata has put in so much effort on the Bolt, why leave one thing which reminds people of the car they don’t want to be reminded off? That said, the rest of the cabin is top class, quality is good, features are abundant and there is some good attention to detail too. We have extensively reviewed the Bolt earlier so naturally we went hunting for faults and we found only a few. For starters, the Harman infotainment system is a gem but it just won’t play a video file because whatever format we used, it simply wasn’t readable. Having very select format beats the very point of having this feature anyway. 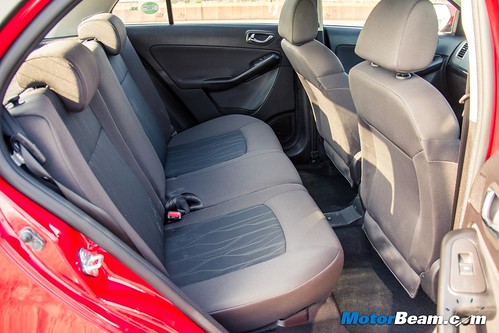 We all have been praising the Zest and Bolt for being loaded to the brim and it does get some unique features (touch-screen, navigation, projector headlights, etc.) but also misses out on equipment which its rivals offer like an electromagnetic tail gate opener, rear parking sensors, keyless GO, push button start, etc. One big gripe with the Bolt (and also the Zest) is the lack of storage bins inside the cabin. Why is there no pocket behind the front seats? Why are the door pockets so small? Surprisingly though, all this was pointed out to the company by multiple journalists at the Zest media drive way back in July, still they went ahead and launched the Bolt with these gremlins. What is easily class leading is the space in the Bolt, it is easily the most comfortable hatchback to seat five people. The boot could have been bigger though. 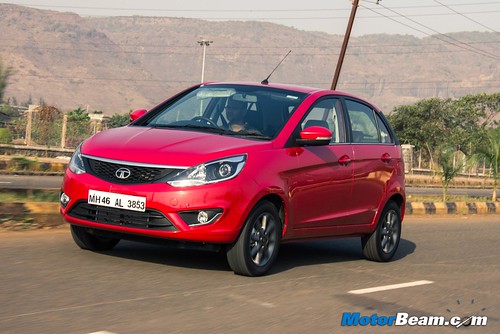 Performance – Powering the Tata Bolt diesel is the famous 1.3-litre Multijet diesel engine which is Quadrajet in Tata speak, producing 75 PS at 4000 RPM and 190 Nm between 1750 to 3000 RPM. This motor has been tuned very well by Tata engineers and offers excellent, lag-free low end performance with a decent mid-range. Power does trail off quickly as you stretch the oil burner past 3500 RPM with top-end lacking. The redline comes in at around 5200 RPM and it’s the top-end where the engine does sound quite audible but the NVH levels are still quite good. 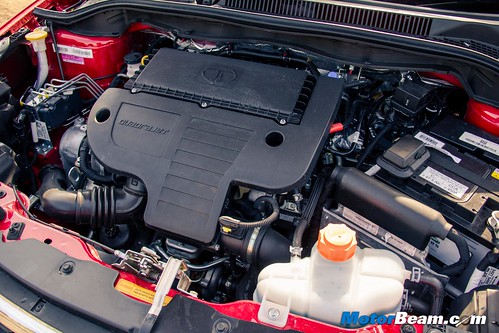 The diesel Tata Bolt offers better performance than the petrol model, it has adequate performance

Strapping on our VBOX, we managed to do a decent run for the 0-100 km/hr sprint, taking just 13.22 seconds (progress slows post 110 km/hr with 120 km/hr taking 18.87 seconds) which does make the Bolt quicker than the Hyundai Grand i10, although slower than its chief rival, the Maruti Suzuki Swift. Numbers aside, the Bolt impresses with its drivability and one can potter around town with ease, even taking off in second gear from standstill. It has reasonable punch on the highway too for quick overtakes, although you do have to work the Fiat gearbox which is smooth shifting but lacks in feedback and doesn’t like fast shifts. 100 km/hr in top gear results in under 2500 RPM on the tachometer and the clutch is light but has a long throw. ARAI certified mileage is 22.95 km/l which is down against rivals and the higher weight of the car is the culprit here. To please enthusiasts, Tata Motors should have offered the top-end model with the 90 BHP tune. 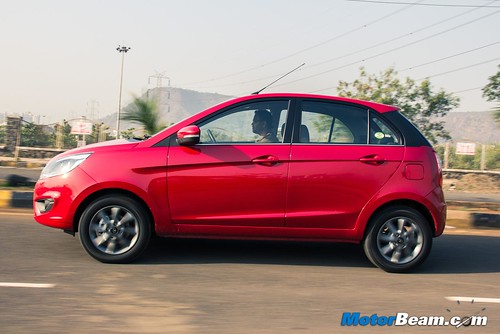 Driving Dynamics – Compared to the petrol model, the diesel is even stiffer to cope up with the slight increase in weight of the car, the Bolt itself is stiffer than the Zest for improved handling. The diesel model too is eager to turn into corners and has oodles of grip on offer thanks to the wide tyres but try to push it harder and understeer kicks in quickly. Body roll is naturally present on this car but still handling is good enough to make you have some fun. The steering seems to have over feedback at certain speeds but does offer decent feel, although not the best. Ride quality is very good and the car does do a good job of keeping occupants isolated from the bumps of the road, with some really big ones being felt. High speed stability and braking is excellent, ABS being offered as standard on all variants except the base XE. 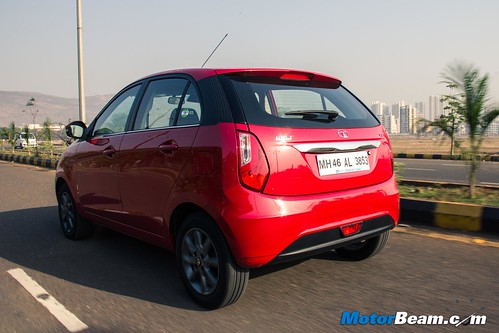 Verdict – The Tata Bolt diesel is a very practical car, it offers plenty of space, long list of features, good handling, excellent ride quality and the cabin is a nice place to be in too. However, when you look at the bigger picture, things stop to look very bright. Unlike the Zest which came at an attractive price, the Bolt simply doesn’t seem as car per car like its predecessor. Rule number 1 of product pricing, you never ask for more money than the segment leader, Tata Motors has done just that, the Maruti Swift costs less than the Bolt and the pricing of the latter is introductory. With the Zest costing just Rs. 35,000/- more, the Bolt’s pricing proposition doesn’t come across as strong. Tata Motors either decided to recover all development costs in quick time or priced the Bolt keeping the upcoming Kite hatchback in mind, either way, the pricing isn’t as attractive as it should be and that’s why the Bolt isn’t selling in as good numbers as it really deserves to.

As a product, the Tata Bolt is a fantastic car and addresses the requirements of a majority of hatchback buyers. However, as far as the pricing goes, the company has chosen to go the premium route and that is very un-Tata like as their Indica has been successful for offering more for less. 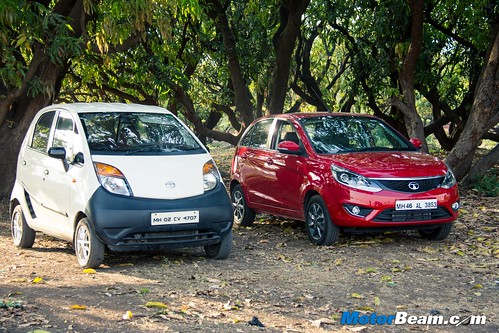 * The diesel engine has very practical tuning and turbo lag is well contained
* Hugely impressive interior with good list of features and abundant space
* Balance between ride and handling is excellent, it walks the fine line between comfort and fun

Tata Bolt Ready, But Launch Only By End Of 2014

Tata Bolt Is The Name For The Falcon 4