We in India firmly believe in the concept of ‘Value For Money’ and Tata Motors is one company which truly understands that. This is the reason why the Indian automobile major believes in giving customers ‘More car per car’. One such vehicle which truly gives you more for your money is the Indigo eCS. The Tata Indigo is essentially a sedan for hatchback money. How is this compact sedan to live with on a day to day basis, we just found out. 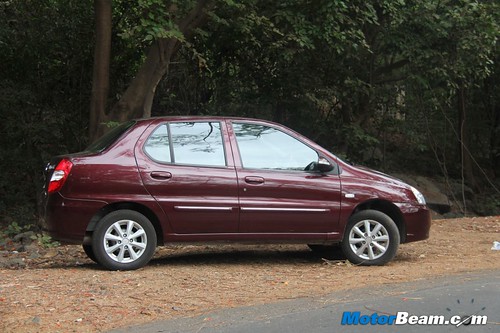 The styling of the Tata Indigo eCS is not eye catchy, it was never meant to be. The vehicle is based on the age old Indigo, which has been doing duty on Indian roads for the better part of the last decade. Tata Motors has given it slight refreshments here and there to keep things fresh. The latest Tata Indigo is the same as the one which was launched in 2010. The vehicle has remained the same in dimension since launch but Tata Motors has tweaked the DICOR motor a couple of years ago. The company has made more changes under the skin to improve mileage even further. 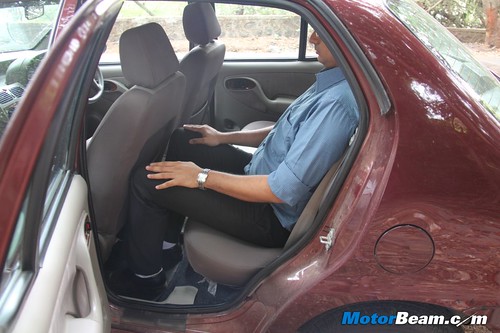 The interiors of the Tata Indigo eCS have ample room for passengers. The Indigo does offer good amount of space, specially at the rear. However cabin quality leaves a lot to be desired from. Cost cutting is evident and panel gaps are present at quite a few places. Ergonomics are not the best either, with the positioning of the pedals and power window switches being a little awkward. Our test Tata Indigo was the VX variant and was loaded with a USB audio system and electronically adjustable rear view mirrors. The small touches are noteworthy, like the cup holders in the glove box and seat belt warning buzzer. 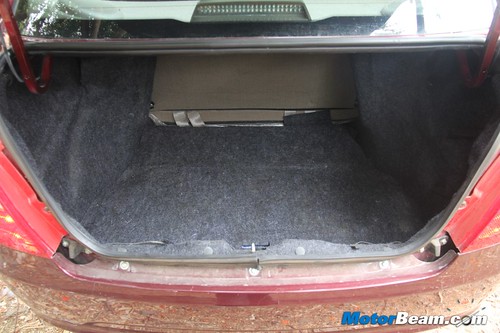 The generous cabin space did come into play and we used the Indigo eCS to ferry luggage and passengers to the airport. The 380-litres of boot space can accommodate quite a lot but due to the design of the boot, it can best accommodate one full sized suitcase, along with small bags around. The AC unit performs very well in the night but during the day it did take time to cool the cabin. The Mumbai heat along with no sun-film can be attributed to the air-conditioner’s inability to cool the cabin quickly. The music system has average performance and does the job well if you are going to be listening to the radio. 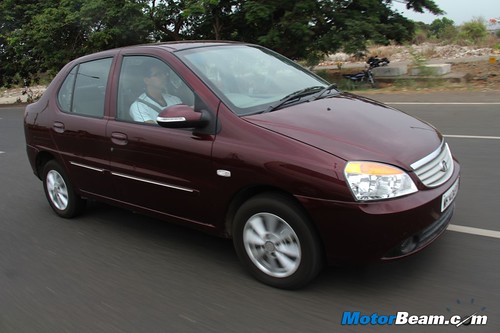 The short length of the Indigo eCS, along with the light steering helps in easy maneuvering of the car in city driving conditions. The small dimensions also help in parking but the steering wheel is a bit too big for our liking. The chrome rings on the instrument cluster look good and the cluster shows an array of warning lights, including low fuel warning and door lock warning. The windshield washer capacity is too less and one needs to fill the washer very frequently. 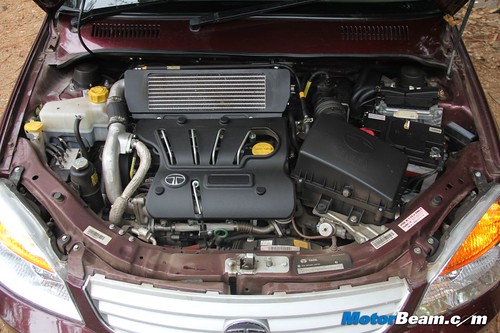 Under the hood of the Tata Indigo eCS lies a 1.4-litre DICOR heart. This 1396cc, CR4 diesel engine is BS4 compliant and produces 70 BHP of peak power output at 4000 RPM and 140 Nm of peak torque output at 1800 RPM. Unlike all other Tata cars, where the engine is either sourced from Fiat or made in collaboration with AVL, the Indigo eCS diesel motor is made by Tata Motors’ Indian engineers. The company has taken the old DICOR engine and made changes to the calibration, air-fuel mixture and power delivery to make the Indigo eCS offer a more refined and smoother power delivery with improved drive-ability. The company has also made the fifth gear taller, which is meant to improve high speed cruising. 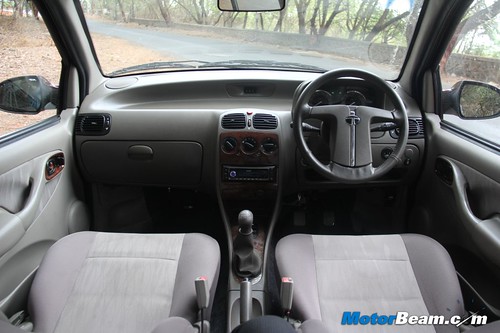 So what does all these changes result in? Turn on the ignition and there is the usual vibrations you get from a diesel engine. Refinement levels are not the best but then you really can’t expect much from a car of this price. However once on the move, you will be surprised by how good this CR4 engine actually is. With a weight of 1065 kgs, the Indigo eCS never feels sluggish or underpowered. There is ample amount of power to keep the vehicle moving comfortable in city driving conditions. 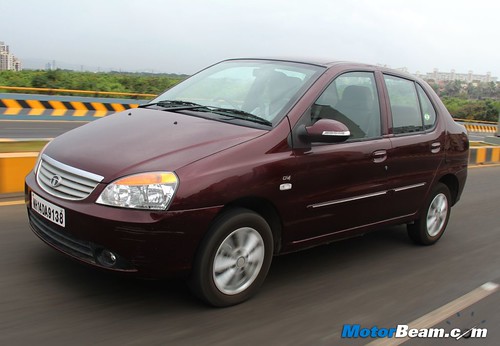 Power delivery is linear and once the turbo spools up at 2000 RPM, the Indigo eCS makes decent progress. The torque spread is very well spread out which makes drive-ability very good. However the gearbox is very rubbery and needs improvement. Driving the Indigo eCS on the expressway, the vehicle had enough grunt to reach triple digit speeds without a hiccup and kept there without any fuss. At 100 km/h, the Indigo eCS feels relaxed and the engine doesn’t feel stressed out. Full marks for Tata Motors for the home made engine, which performs very well in both the city and the highway. A better gearbox could have made the driving experience so much better though. 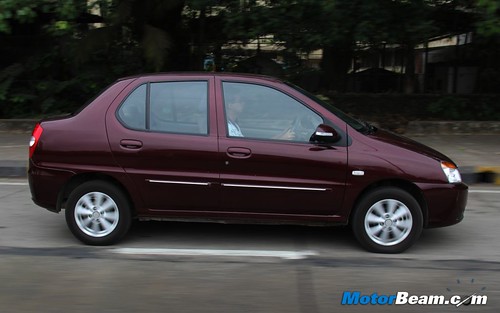 Tata Motors has stiffened the suspension of the Indigo eCS slightly which aids on handling and straight line stability. On the expressway, even at speed, the Indigo never felt unstable or bouncy. While the Indigo eCS is not the car to be thrown around corners, it handles above average around the corners. The steering wheel feels vague though and offers very little feedback. As a result of the slightly stiffer setup, the ride quality is bit harsh and the suspension tends to crash in on bad roads. This improves with speed though and the reworked suspension geometry does show as the speeds build up. Braking performance is good and the ABS helps to prevent lock-ups. However most buyers would not pick the top-end variant, which gets ABS. 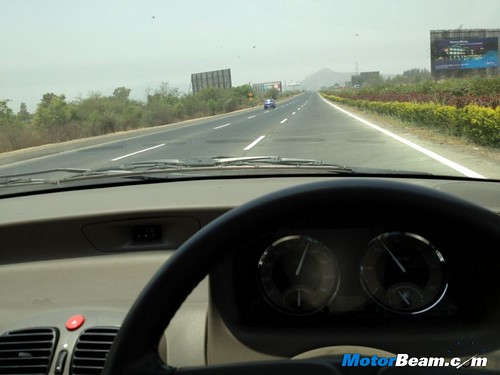 The Indigo eCS gets lower resistance tyres, which helps in boosting mileage. While Tata Motors claims 25 km/l, the Indigo eCS returns a figure of 17.5 km/l in the real world. This makes it one of the most fuel efficient sedans in the country. The Indigo range starts at Rs. 5.43 lakhs for the base GLS and goes all the way upto Rs. 7.19 lakhs (all prices on-road, Mumbai) for the top end VX. There are 9 variants on offer, giving buyers ample choice.

The Tata Indigo eCS is not the best built Tata car and is build to a price. Quality levels are far from what you would expect in today’s day and age, while fit and finish could have been a whole lot better. However after living with the Indigo eCS for a months time, we can confidently say that the Indigo offers very low running costs and decent space at an aggressive price. The engine impresses with its good city drive-ability and being the cheapest sedan on sale today, it offers huge practicality to the buyer. 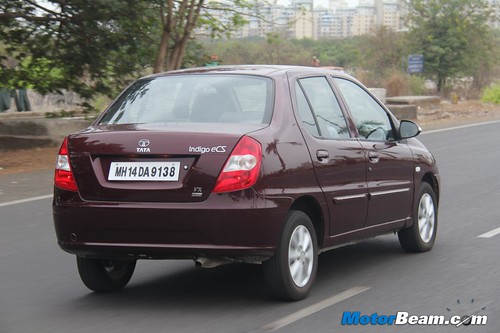 Whats Not So Cool