Tata Motors launched Full Throttle last year, which is its motorsport and off-road banner. The company has been organizing trails and experiences for Tata Motors utility vehicle owners and we had a chance to attend the Jodhpur trail. The event was flagged off from Hotel Lake View resort and there were around 25 vehicles participating, comprising of Sumo, Safari and Aria. Surprisingly there were no Xenon owners and the one you see in the pictures was part of the organizing team. We were given a Sumo Gold which is a 2-wheel drive vehicle. 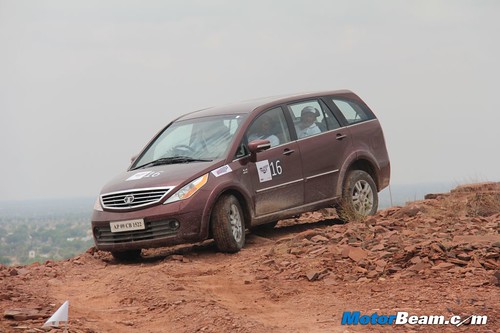 Post flag off, all vehicles drove in a convoy to the off-roading location, which was around 40 kms away from the start point. Upon reaching the off-roading destination, the convoy was split into smaller groups to speed things up. There were six challenges and the first one involved driving through rutted terrain. This was not really challenging and was easily accomplished by the Sumo. None of the participating vehicles faced any problems on this challenge. 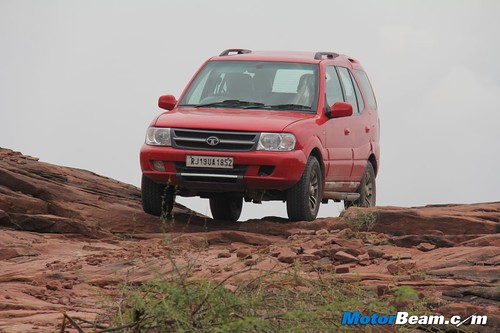 The second and third challenge was a small climb and descend. You really don’t need 4-wheel drive for such kind of challenges. Instead what you need is good ground clearance, which is abundant on the Sumo. The Safari too found it a cake walk to conquer this terrain. However the Aria was struggling and was bottoming out at most of the places. The crossover is certainly not the best companion on the roads less travelled. 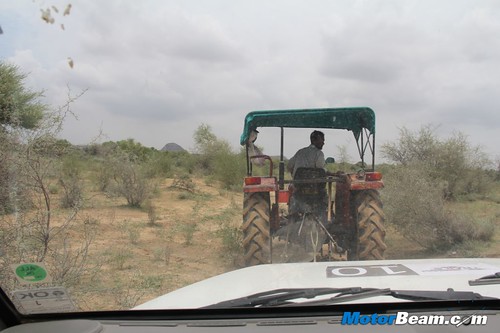 The fourth challenge was the only challenge where 4-wheel drive was needed. It involved a steep climb on sand. One had to build good speed and approach the low grip climb. This particular challenge saw little success as most vehicles had 2-wheel drive. We got stuck in the Sumo and a tractor had to tow us out. There was absolutely no grip and the more power we gave, the deeper we sank. The Aria too could not make it through but the Safari did it with ease.

The last two challenges involved water. One was a water crossing, which was not too deep while the other was wading through deep water. As you can see above, the water was quite deep on the last challenge. Nobody got stuck and could easily drive past. After the completion of every challenge, an official would sign on your report card. This complete off-roading was around 20 kms and all the challenges were a few kms apart. In reality, we did not even drive more than 3 kms off-road, with every challenge being too small a section. 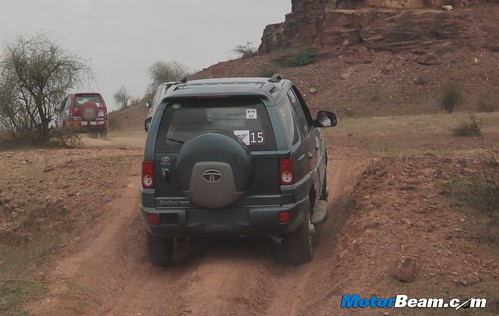 It will be apt to call the Full Throttle trails a more fun oriented activity than an outright off-road adventure. Other than the sand and gravel challenge, all other obstacles were something which even a 2-wheel drive vehicle could do without a hiccup. If you are looking for real off-roading, the Full Throttle will disappoint. However if you want to enjoy driving on different terrains and have some fun, Tata Motors Full Throttle is the perfect thing to do. At around Rs. 1000/- per trail (including breakfast and lunch, excluding fuel and vehicle), the Full Throttle trail is certainly worth doing. There are 16 more trails planned for in the remaining part of the year.