Tata Motors have been known for making many things. One such thing is being done for more then six decades and it is what you think it is. Trucks, Tata is the dominant truck maker in the country today, fourth largest bus manufacturer and fifth largest truck manufacturer in the world. If a company has these kinds of accolades in a particular category, they can do anything with it, literally anything! They have done something with it and it’s called Racing. Truck racing! That is right, what you read is right. The sport is not genuinely new as it is being conducted around the globe for a really long time now. 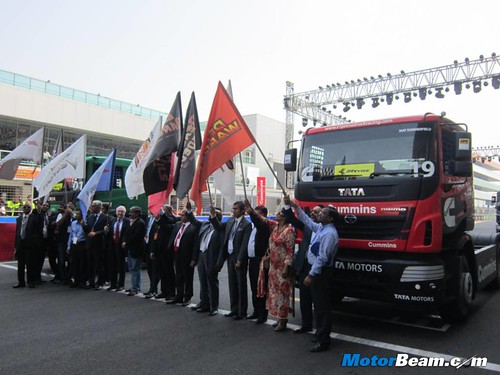 Tata says truckers do not get the admiration and respect they really deserve. It is right in a way though. They keep driving for hours, non-stop, at slow pace for days and have to reach destinations safely with stuff which costs a lot of money and is extremely heavy and dangerous in some scenarios. However, they have huge engines, so much power and torque that if you remove the weight they have, they can literally fly (by truck standards). In short, truckers are bogged down mountains, traffic and stuff which weighs in tons. However, if you give them a controlled condition and let them loose, they can have a lot of fun. 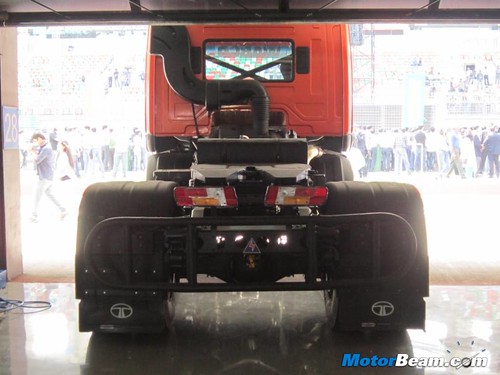 Significantly lower, wider and lighter stance over the stock and usual trucks we see

Technical inputs from across the world combined for this mission. Italian cab design, engine technology borrowed from US and European companies. The gearbox expertise came from Germany and chassis geometry and knowledge from Mexico. Sheet metal dies from Japan and Korea were combined with Swedish precision on a robotic weld assembly line. All this was to ensure driver comfort. Tata says that they have technology do it with the new generation trucks they have being churning out. To meet the safety and race regulations, it took them 22 modifications over stock to create a racetrack ready truck. Tuning the engine, adding role and safety cage, brake cooling sprinklers, semi-slick tyres, propeller shaft guards and much more small yet significant changes made to the trucks to reach FIA and FMSCI safety regulations. Most of these guidelines came from the British Truck Racing Association, which came due to majority of the drivers belonging to the land of nanny states. Trucks, which were being raced, were Prima 4038.S models, producing 370 BHP of power at an insanely low 2100 RPM and over 1000 Nm of torque from a massive 6.7-litre engine. Finicky it may sound, all this allows them to do only 110 km/hr due to the 4-5 ton weight and limitations also come due to the brakes. 60-litres of fuel was used for the entire race. Stock tank sized is usually around 400-litres. 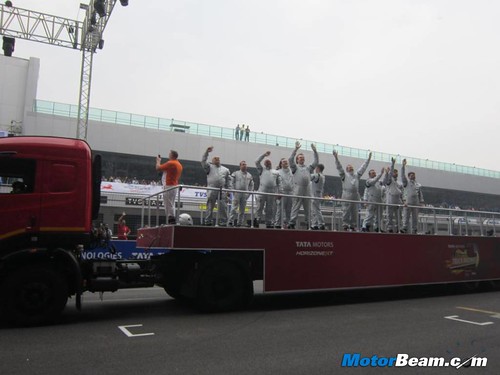 The drivers just before the race introduce themselves in style

The drivers are no 18-20 year old guys with spiked hair, weird beards and tattoos. Most drivers were above the age of 45 years and the youngest were around 30 years old. Yes, this is a sport for the elders as well. No dieting, no exercise to handle g-forces and other endurance tests. You can race with a gut, a huge one if you wanted to! All though experience is something which is required to haul these 5-6 ton trucks. One of the most senior racing drivers who has been racing since the eighties said these trucks have the same amount of horsepower which our trucks had back then. This reminded him of how can you push low horse powered vehicles much harder, be safe, predictable and yet have a lot fun. Obviously with new technologies in these current trucks, the joy levels were even higher. 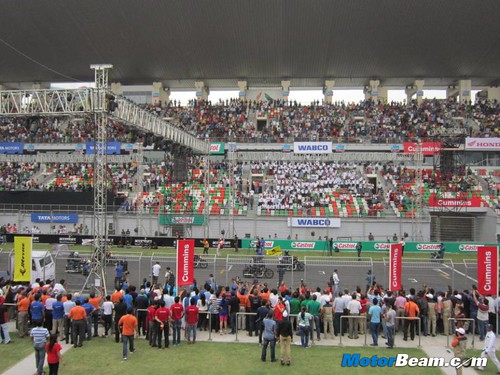 The Tata T1 Prima Truck Racing championship was underway on 23rd of March, a lazy Sunday afternoon for most, but totally the opposite scene for the thousands of fans and viewers who came to the Buddh International Circuit to witness something which is completely new to Indian citizens! The level of excitement when the first time trucks turned up on the track for a sighting/warm-up lap was beyond imagination. The crowds cheering, shouting, howling was not expected from an amateur audience. 12 trucks were being raced by 6 teams. The start was a rolling one, so no wheel screeching or wheelies (kidding). Castrol Vecton, Cummins, Tata Technologies Motorsports, Allied Partners, Dealer Daredevils and Dealer Warriors are the teams in question and the winner for the first race was Castrol Vecton. 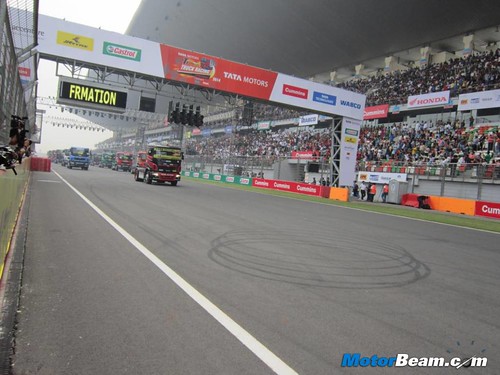 Truck racing as they say is very cruel most of the time. Bashing and honking each other means the habits of street are taken to the track (imagine the fun levels here). At one point of time, the second in position driver was seen touching the pole position driver and pushing him forward at speeds above 80 km/hr which resulted in a mudguard being destroyed (no downforce for the poor lad) but nothing dramatic. Racing is entertainment for most due to the sound racing machines create. Trucks here were not capable of delivering symphony but the howling of turbo diesel was quite audible and considered wicked in many aspects. 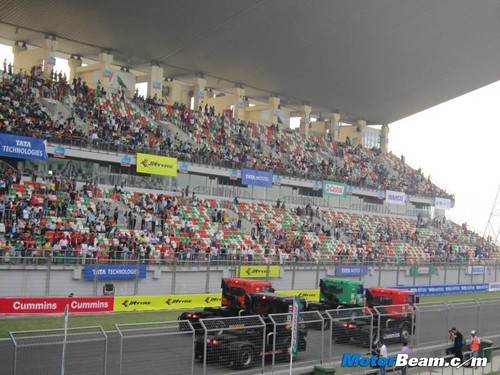 Trucks were beside each other for first few laps, what a spectacle

The track chosen was BIC but for the truck race, the short loop track was appointed. 1.50-2.00 was the time the trucks were doing on the short loop and average speeds were around 75 km/hr which is quite a lot considering the trucks are doing 115 km/hr tops! When trucks came back into the pits, the thing which was being noticed was the smoke coming out of the brakes. Despite sprinklers, the brakes could not hold on for 15 hardcore laps. Like I said, brakes are one of the major parameters restricting pace and lap rounds. 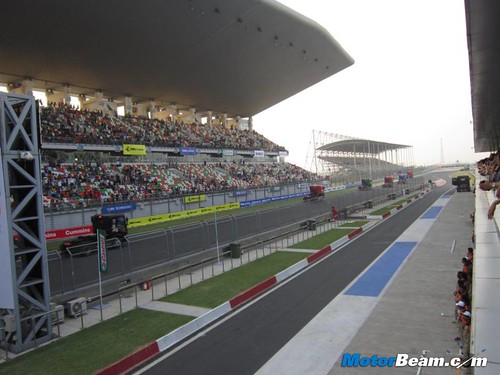 Tata Motors started and ended this occasional moment for them in complete style. Various artists coming from around the nation and performing for the starting and closing ceremony was witnessed. The fashion show was on a ramp which were placed on the trucks. Let’s not forget grid girls who were there to cheer everybody with their beauty and wide smiles. 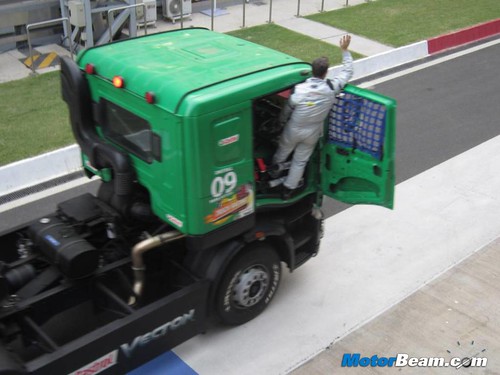 Winner celebrates his victory in a way how truck racing drivers do? We think so!

All in all, a new experience for everybody out there and motorsport coming in various ways is a welcome move in India as always. Tata Motors has kick started it and it may invite the competition to do so as well. Since everybody looks at the monetary side first and then decide to step in, it will take some extra time. Some manufacturers have already denied the fact but you never know when trucking will meet racing for everyone! 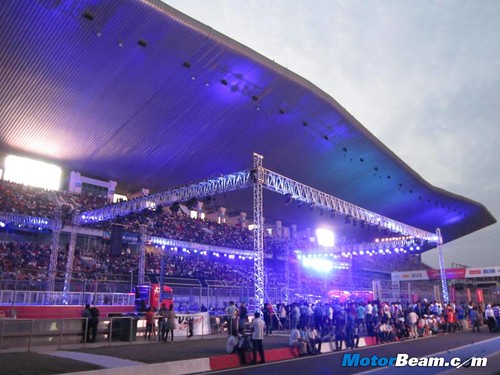