The flagship TVS Apache is a very practical motorcycle, fast, frugal and fancy too

It took about two days for the service of the TVS Apache RR 310 and as expected the motorcycle did show improvements. The panels were looked out for and the vibrations had reduced by a good amount. The projectors were adjusted and the light throw had become better while the chain and sprocket setup was also fixed. The bike was ready for more mile munching and I had my plans ready for the new year as well. But then we had a set of parallel-twins coming in for the day. By the end of the shoot, there was a surprise and we brought it up in the video too. We compared the Kawasaki Ninja 300 against the Yamaha R3 but for the price and the capabilities, the Apache RR 310 felt more of a winner. 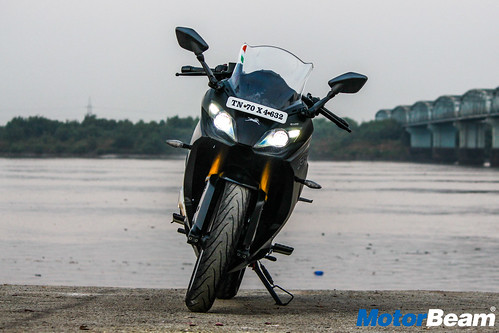 BI-LED projector setup makes it look like a big bike

Although there were a few issues, everyone on the team loved riding the Apache. There would be some or the other reason that the bike guys from our team would come up with and ask for the flagship TVS. Everyone just wanted to enjoy the commanding power and the attention it got. But then I enjoyed riding the Apache so much that I would rarely give it to anyone in the team. Out of the 4000 kms, I road almost 3000 of them and loved every bit. 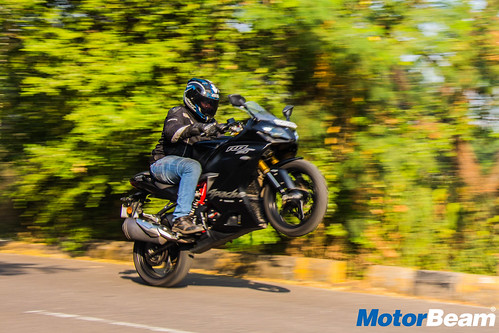 The mid-range punch just makes it one wheel happy

As it had become my primary mode of transport, I would take the Apache to work and more often to the weekend getaways too. People thought that I actually bought the Apache RR 310 as it would show up on my social media very often. The Apache got the attention it deserved but my family members did not like it much. As my mom has a habit of hopping on as a pillion and the pillion seat of the Apache is too high. Getting on and off was a difficult task for her and as the media bike did not have a grab-rail to hold onto, it wasn’t comfortable. 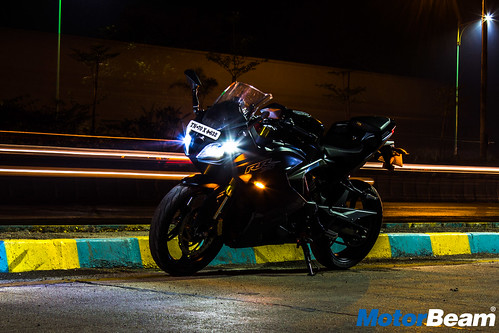 With its matte black colour scheme, the 310 is hard to spot in the dark

In the first report, I had mentioned that the mirrors bothered me a lot but then with time I got used to it. The easiness and sharp handling helped me a lot while filtering but then the mirrors slowed me down, thought twice before making a move. But then the BI-LED projector headlights were adjusted properly and dropping a pass light was more fun than ever. The cars or bikes ahead would think a big motorcycle is coming and would give me the space to filter thoroughly. While the illumination was so good that I would ride with the dark visor on the helmet even at night!

TVS Apache RR 310S Is The Production Name For Akula