After the TVS Apache RR 310 long term, I ended up purchasing the motorcycle. It was that brilliant of a machine and it took some while for the Apache 160 to be ready for the long term. I got the bike right after the first race of the FMSCI INMRC TVS One Make Media Race but the bike had to go back because of insurance renewal and a small service. It came back to me right before the second race and it had started raining heavily in Mumbai. We had the TVS Apache RTR 160 4V for almost a month and it impressed just as much as the RR did. 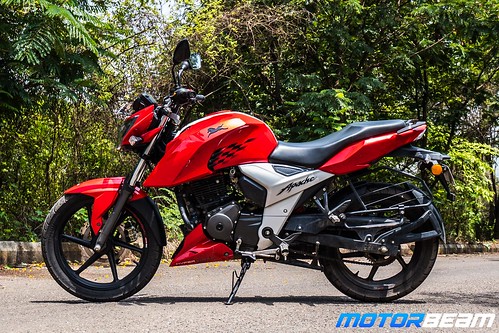 With the red colour scheme, the Apache is a looker

Although there were a few bits which needed a check. The first week with the Apache 160 went pretty brilliant. It had then gone for a service and when it came back, the oil was changed and the insurance was renewed. This meant I could take the 160 for longer distances as well as keep it going for office commutes. Out of the 1700 kms, almost 1200 kms was more of city riding and small highway commutes. The motorcycle impressed me a lot with the punchy nature of the engine.

Once astride, the dynamics are very engaging

The exhaust of the Apache 160 had a mellifluent bassy note

The Apache 160 would get up to triple-digit speeds in no time on the open roads. Getting around traffic and being the first one to leave the traffic signal felt really good too. After the RR I had a feeling no motorcycle could take its place as a primary mode of transport but the Apache 160 packed in a surprise! The motorcycle was in a bright red colour scheme while the RR was matte black. The 160 grabbed as much attention as the RR did and it kinda felt nice.

The ergonomics were comfortable and upright, aiding to a perfect city motorcycle. The posture felt rather upright and comfortable than the Apache 200 because of the handlebar setup. The mirrors were wide and gave a good view of what’s behind but hindered quite a bit when filtering through traffic. The Apache 160 also came in handy when I had a pillion along. As the pillion would sit very comfortably on the single-piece seat setup. Even if the rider-pillion weight added up a lot, the 160 had enough grunt to keep a good pace going.