The TVS Phoenix comes as a pleasant surprise in the commuter segment.

Commuter motorcycles are the bread and butter of every 2-wheeler manufacturer in India, accounting for a majority of sales. This segment is extremely important too as it serves the requirements of a a large number of people in our country. After a long time, TVS has launched a new motorcycle in the Indian market. The TVS Phoenix is a trendy commuter bike, boasting of many segment first features. This 125 cc machine can help the Chennai based 2-wheeler manufacturer to boost volumes in the highly competitive commuter segment. But does the TVS Phoenix have the goods to deliver and shake its rivals? 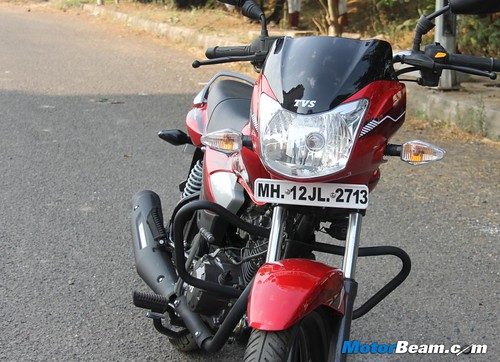 Styling – The TVS Phoenix, at first glance, looks sporty despite being a commuter in shape and size. Phoenix has an ‘electrify’ theme, courtesy, the graphics which are everywhere on the motorcycle right from the multi-colored front mudguard, headlight, side panel and very prominent on the rear fender and the fuel tank. The Apache inspired headlight looks substantial because of its size and lines. The exhaust with the ‘EcoThrust’ badge looks good too. Fuel tank design is very commuter, so is the tail light section, but it’s the excellent paint job, all black theme side panels encouraged from Apache and the nicely sculpted rear fender which makes the TVS Phoenix standout in the crowd from other commuters. 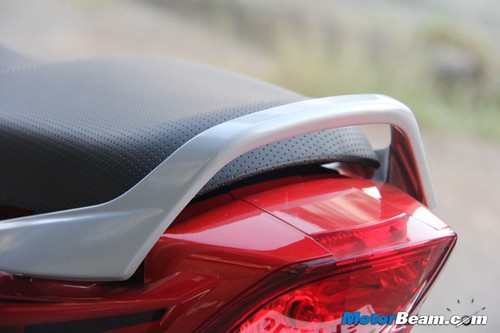 Ergonomics – The seating position is upright, but it is low, which makes the TVS Phoenix a boon for short riders. RVMs aren’t that wide but should be sufficient for normal sized riders. There isn’t a knee recess on the TVS Phoenix to grip to due to the shape of the tank. Dual designed fabric seat looks good, but it’s on the softer side which made our ride uncomfortable after 50 kms in the city. 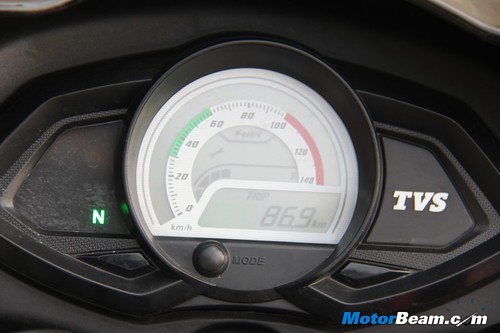 Instrument Cluster and Switch Gear – This is the party piece of the TVS Phoenix, the logically laid out digital instrument cluster is a commuter segment first. The round dial displays a speedometer which can be mistaken for a tachometer at first glance and the fonts are small and hard to read whether it’s day or night. It shows a segment first service due indicator and a low battery indicator. There’s the digital trip and odometer which can be toggled via a button. 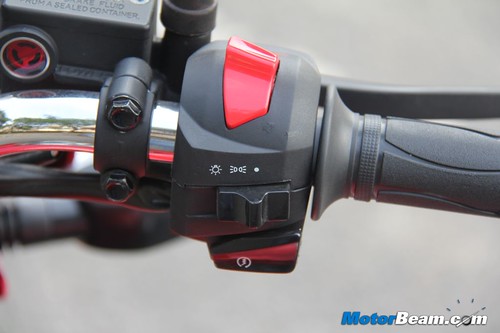 Rest two dials on either sides serve the basic function. On the right, there’s the high beam, shift light and indicator light displayed, the left side sees brand name TVS embossed neatly. Switch gear and palm grip quality and finish is miles ahead of any commuter bike because it’s a straight lift from the Apache, solid feel and easy to use. There’s more, once again a first is the hazard light indicator which is the replacement of the engine kill switch, neat thought. A very mature decision by TVS to introduce this feature as it’s useful for parking on dual carriage roads and panic braking situations. 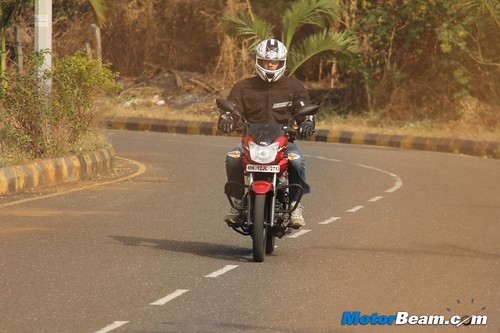 Performance and Gearbox – The Phoenix is powered by an all aluminium, 125 cc, single-cylinder, air-cooled, 4-stroke engine, that makes 10.9 BHP of power at 8000 RPM and 10.78 Nm of torque at 6000 RPM. The engine is smooth and peppy, not very loud but does sound coarse at redline. Throttle response is linear though; the engine is vibe free and surprisingly sounds good too, despite the commuter nature of this motorcycle. Low and mid end grunt is excellent, aiding drivability in the city where it belongs. 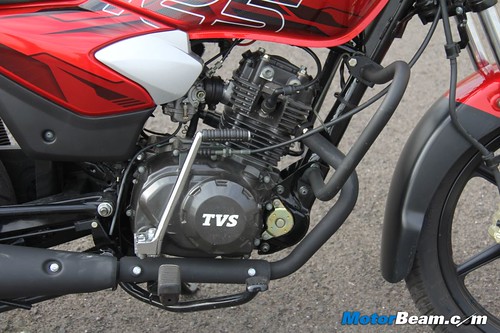 The Phoenix reaches the 70 km/hr easily after which progress is slow to a top speed of 90 km/hr. The 4-speed gearbox is precise and effortless but a bit clunky and not as slick as its Japanese rivals. Short ratios help in minimizing gear shifts, even in traffic, 3rd gear, 30 km/h, the motor pulls flawlessly. Neutral is achieved easily. Only if the Phoenix was a 5-speed gearbox, it could have been much more efficient and relaxed on the highway. 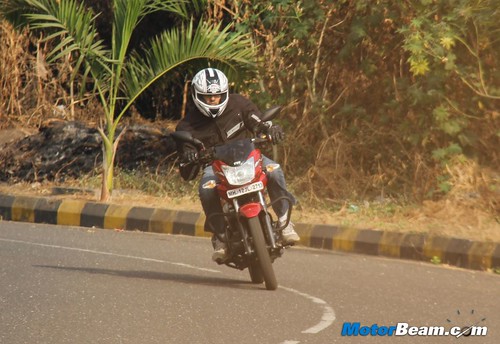 Riding Dynamics – Phoenix has been loaded to the brim here as well. A well refrained single down tube chassis with superlative front suspension geometry and the innovative Series Spring rear suspension setup gives it excellent handling dynamics. The harder you push the motorcycle into a corner, it gives you confidence you need and thanks to low seating position and the feedback from the front which a rider requires for an amusing ride on a twisty road. 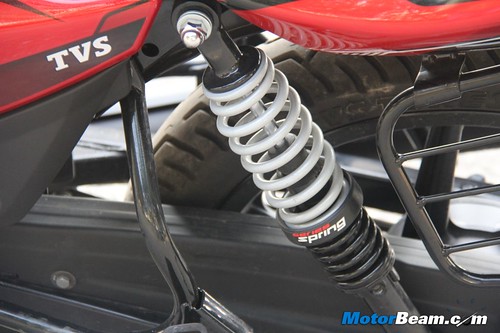 The Series Spring suspension setup which is applied on the Phoenix always makes the rider feel it’s constantly working, which makes it a bit disconcerting some times. Braking is excellent too, a light kerb weight and a 240 mm petal disc at the front giving superior bite from the master cylinder and 130 mm drum brakes at rear make braking precise. But the handling and braking could have been better if the tyres would have been on the softer side which is the complete opposite here; all though they also give a benefit, longer tread life. 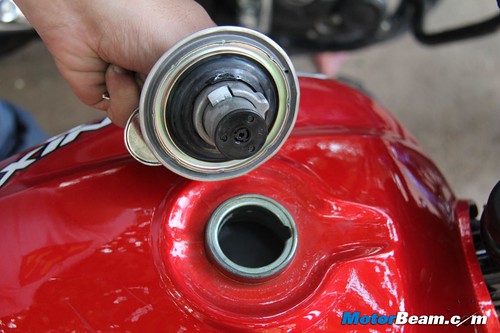 Miscellaneous – Shocking omission of under seat storage and foot peg holder. Some may think it misses out on the some goodies which the competition offers such as LED tail lights, but it makes it up with the LED pilot lamps, first in class which come on the Phoenix, which truly makes it look like a younger brother of the Apache. The TVS Phoenix has 6-spoke alloys wheels instead of the usual 5-spoke alloys seen on majority commuters, neat touch. Indicators have a black piano finish, a la Honda bikes. Fuel filler cap when lifted comes in the hand; it’s high time we get the flap mechanism standard in all bikes. Lightest bike in its class, standing with a kerb weight of just 116 kgs against the competitions, while all others weigh 6-7 kg heavier. 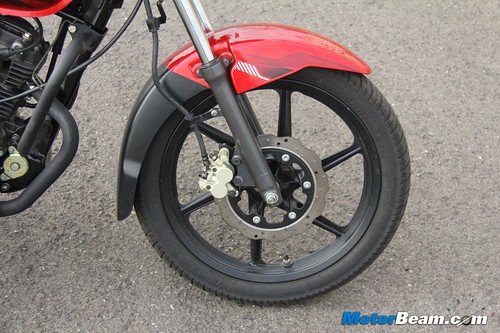 Verdict – The TVS Phoenix, no doubt has an edge when it comes to goodies and has almost everything what a modern commuter needs, easy to maneuver, comfort, affordability and a good fuel efficiency. We don’t see why one should not give this motorcycle a second thought because Phoenix comes out as a very attractive package, offering more than what is required to reach from point A to point B in a comfortable and economical manner. 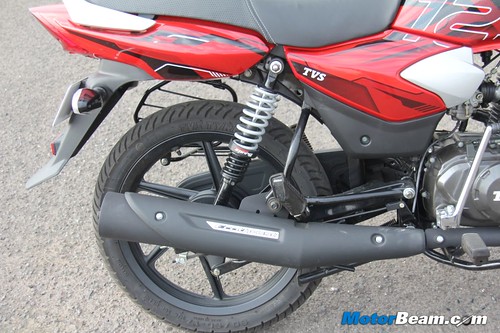 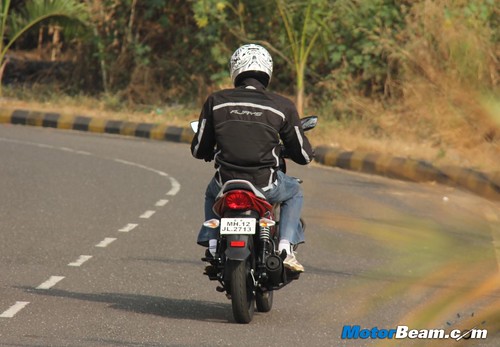