When Volkswagen launched the Polo in India, it was the only car in its segment to come with a 3-cylinder diesel engine, something which wasn’t appreciated by enthusiasts. Now Volkswagen has plonked in a bigger 1.6-litre diesel engine in the Polo which is borrowed from its elder sibling, the Vento. However the Volkswagen Polo is lighter than the Vento and that surely plays a big role in the performance of the GT TDI. The Volkswagen Polo GT TDI is by far the most expensive locally manufactured hatchback in the country today (thanks to the higher excise duties) and the difference between the similarly specced 1.2 TDI model is a considerable Rs. 1.19 lakhs. While VW hasn’t made any other changes, is the performance from the 1.6-litre TDI enough to make a strong case for the Polo GT TDI?

Motor Quest: This is not the first time a manufacturer has put a powerful diesel engine in a hatchback. Hyundai did it with the Getz CRDI which produced 110 PS and 240 Nm from its 1.5-litre powerplant.

On the styling front you are set for a disappointment. Other than the GT badge on the grille and boot, there is absolutely nothing which differentiates the car from the regular Polo (no GT badges on the C-pillar like the GT TSI). The Volkswagen Polo GT TDI comes in Highline trim only and the alloy wheels get the familiar Estrada design. The Polo doesn’t look old or dated, in spite of being on our roads for more than three and a half years now but neither does it stand apart. A minor facelift was given to the car last year but the GT TDI should have got some unique design elements like different alloy wheels, blackened roof/mirrors, body kit, indicators on rear view mirrors, etc. However for those who want to surprise others on the road, the sleeper look fits in just fine.

The interiors of the Polo GT TDI are similar to the regular Polo (Highline variant). Specific changes for the GT TDI model include “GT” scuff plates on the door step, aluminium pedals, leather wrapping on the steering wheel, gear knob, handbrake lever and ‘Milan’ Titanschwarz fabric upholstery. The centre console gets piano black finishing and the GT TDI gets climate control and RCD 320 audio system, found on the GT TSI. The audio system offers Bluetooth connectivity along with USB, iPod, AUX and SD card support. The horn doesn’t sound impressive for a German car and feels a bit mellowed. The seats are comfortable and offer good back support. There are reverse parking sensors too and the dashboard design is neat yet attractive while the dials on the cluster are very classy. 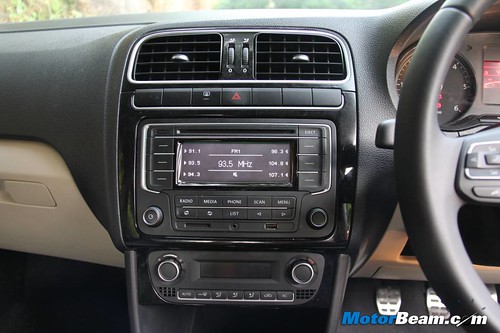 The cabin has decent space at the front but rear seat space is below average, specially with taller passengers at the front. The scooped front seat back helps but only just. Even the driver isn’t very comfortable as there is little space below the steering wheel, thus if you are tall and you lift of the clutch, you are bound to scrape your left leg with either the steering wheel or the centre console. Quality levels are phenomenal though and the cabin feels very well put together with the light touches amplifying the feel good factor. One touch up/down power windows for all doors is a neat touch and the 260-litre boot is decent sized. 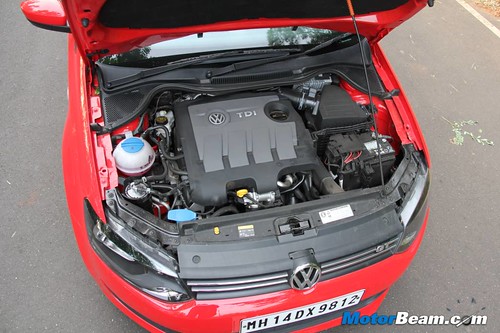 Get over the lack of sportiness on the exterior and interiors and come to the heart of the matter and you are bound to be impressed. The Polo GT TDI is powered by the same engine which does duty in the Vento and Skoda Rapid, we have driven them extensively before so what’s the big deal when it powers the Polo. The Polo is a hatchback, weighing around 65 kgs less than the Vento. The second most powerful diesel hatchback in the segment is the Fiat Grand Punto 90 HP and its down on power by 12 PS and 41 Nm. In spite of the Polo producing more output, it’s lighter too and better geared as well and that makes it significantly faster than any other diesel hatchback in its segment. The 1.6-litre diesel motor thrusts out 105 PS of power at 4400 RPM and 250 Nm of torque between 1500-2500 RPM. 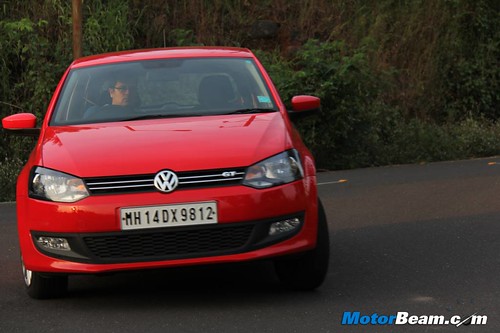 Power up the engine to life and the diesel clatter is quite audible inside the cabin, although vibrations are minimal, the sound from the motor is heard throughout the power-band, more so post 2500 RPM. There is a bit of a lag (until around 1500 RPM) post which the Polo GT TDI pulls strongly. Performance is pure savage, the way the GT TDI accelerates can leave you smiling for hours. There is so much torque that you can lift the car off from standstill in third gear or from 30 km/hr in fifth gear and the vehicle just pulls. 0-100 km/hr takes less than 10 seconds and top speed of 195 km/hr is achieved in fifth gear. The best part of this motor is its high revving nature, it redlines at close to 5400 RPM and it does so cleanly, only hesitating once past 5000 RPM. Power starts to taper off post 4500 RPM and there is so much performance on offer, you simply don’t need anymore on Indian roads. 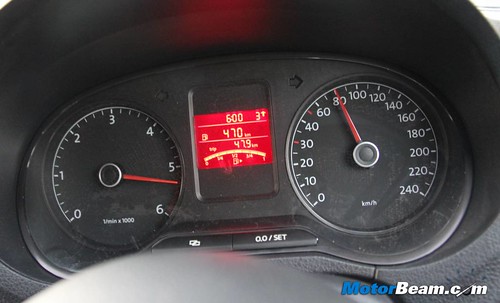 Step on the throttle and the first gear will top out at 46 km/hr, second at 79 km/hr, third at 122 km/hr, fourth at 160 km/hr. Cruising is a comfortable affair too and the RPM needle hovers at 2300 RPM at 100 km/hr in fifth gear. Keep the engine above 1500 RPM and it reward you with instant performance. So while cruising at 80 km/hr in fifth (RPM at 1800), simply floor the throttle and you will be genuinely awestruck by the stupendous in-gear acceleration. In no time you are doing 160 km/hr, it simply pulls in a linear manner and does so as if its in a lower gear. In fact there is so much power that you wheel spin even in second gear! The gearbox is about average as it feels notchy when you try to shift gears enthusiastically (putting it in reverse can be a bit of a task as the transmission isn’t the smoothest) but feels just fine when you slot in the cogs calmly. ARAI mileage is 19.78 km/l and we don’t understand how the Vento delivers a higher ARAI figure of 20.5 km/l. The Polo GT TDI is a frugal car, in spite of pedal to the floor driving, we got a mileage of 14 km/l which should stretch to 15+ km/l in sane conditions.

The Volkswagen Polo is known for its well set up chassis and the GT TDI helps you to exploit the brilliant set-up even further. With so much power on tap, you can dive into corners with faster speeds and that’s when you will truly appreciate the handling of the car. The Volkswagen Polo GT TDI is sharp and has terrific body control but tends to understeer when pushed very hard. It remains thoroughly glued to the road even at high speeds without giving you a hint of the speeds you are doing. The steering offers good feedback, it’s quick and accurate but not very feel-some. Ride quality is excellent and the Polo glides on the roads with almost tank like precision, with only really bad roads unsettling the car to an extent. Even at high speeds, ride quality is mature and the European genes are apparent, no vibrations on the steering wheel whatsoever. The braking could have been better though considering the speeds you would be hitting very frequently on the Polo GT TDI. On really heavy braking the tyres do screech and the Polo does twitch a bit which is purely due to the 185 section Apollo rubber which isn’t enough for a car capable of such mind-boggling performance. 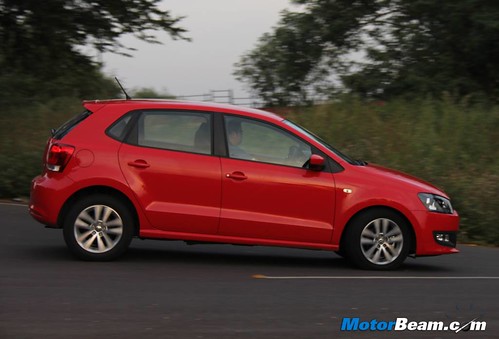 The Volkswagen Polo is a hugely capable car and it won the European car of the year in 2010 which is testimony to the same. The Polo is a very under-rated car and the lack of performance from the 3-cylinder engines made many shy away from it. With the Polo GT TDI, Volkswagen has given hot hatch lovers reason to rejoice. While the GT TSI offers more features and convenience at around Rs. 10,000/- less than the GT TDI, the latter is undoubtedly the more fun car which is easier on the pocket thanks to its frugal nature. Comparing the Polo GT TDI with any car makes absolutely no sense as there is nothing in the same league when it comes to performance. Volkswagen has given enthusiasts a diesel car with ample performance and although it’s the most expensive vehicle in its segment, the price you pay for the scintillating performance is completely worth it. 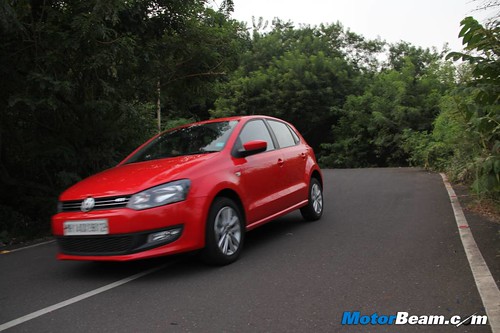