Volkswagen has launched the Vento TSI in India, priced at Rs. 9.99 lakhs (ex-showroom, Delhi). The Volkswagen Vento TSI uses the same powertrain as the Polo GT TSI and the company has been experimenting with powertrain options on its bread and butter models (the Vento gets Polo’s TSI motor while the Polo recently got the Vento’s 1.6-litre TDI mill). The Vento TSI replaces the Vento Highline AT and the new petrol engine is more fuel efficient than the one it replaces. The Volkswagen Vento TSI returns a claimed mileage of 16.93 km/l while the old 1.6 AT returned 14.4 km/l (mileage ARAI certified).

Volkswagen isn’t charging an extra premium on the Vento TSI over the old Vento AT, with the price difference between both being only Rs. 18,000/-. However you do get much more in the Vento TSI as the company has given the car ESP and hill-hold function along with all the standard features found on the Highline trim of the Vento (ABS, dual airbags, alloy wheels, steering mounted audio controls, rear parking sensors, etc). The interior of the Vento TSI gets leather wrapped steering wheel, gearshift knob and handbrake lever. The seat covers are leatherette and the dash gets chrome inserts, aka very Polo GT TSI like.

Powering the Volkswagen Vento TSI is a 1.2-litre, 4-cylinder, turbocharged motor which produces 105 PS of power at 5000 RPM and 175 Nm of torque between 1500-4100 RPM. The engine is paired to a 7-speed DSG box which is a dual clutch transmission. While the power output of 105 PS is the same as the Vento 1.6, the torque output is higher (175 Nm against 153 Nm). Peak torque is produced right from 1500 RPM (till 4100 RPM) while the 1.6 petrol engine produces its peak torque at 3800 RPM. The Vento AT used a 6-speed single-clutch gearbox. The Vento TSI is offered in 6 colours namely white, grey, beige, blue, silver and black. 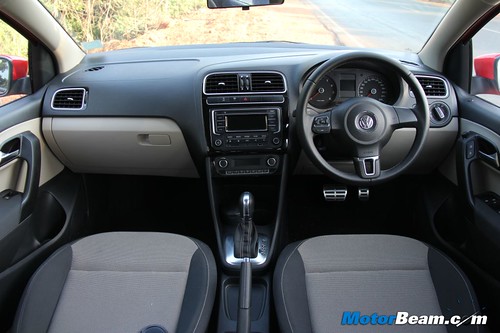