The Yamaha Alpha is here to dominate and show the competition from the same homeland that value for money is very much possible.

Getting up in the morning and going to work is a very common phenomenon for everybody. Hitting traffic and getting stuck in it is also one of same things we all encounter. However there a lot of common things we face but there is one more thing which is getting common, that is scooters. While warming up my bike, I always see my neighbour bringing his scooter to life in many ways, which also has become a common sight. Scooter popularity is growing higher and higher. Thanks to a household name, Honda, now everybody wants a scooter or desires one. Other companies have started cashing in on the idea as well and Yamaha has readied their latest offering to target the market leader and Honda’s best selling product, the Activa. Yamaha also has a reputation of making high quality, extremely durable products and with the same mission they are launching the Alpha with a price tag that undercuts the market leader while offering more to the consumer. While the Activa continues to get dated by lacking in several counts except the engine, will the Yamaha Alpha take over till the next generation Activa arrives? We find out.

Motor Quest: Yamaha has been making scooters since quite sometime now but its first scooter in India was launched only a couple of years back, in the form of the Ray. The Alpha is Yamaha’s second scooter in India (the Ray Z is not really different from the Ray).

The front of the Yamaha Alpha has a car like grille, the rear isn’t very striking but overall it looks good

Styling – The Yamaha Alpha is fresher of the lot and still it hasn’t used the advantage in terms of styling. The front of the scooter has swooping panels with the headlight mounted on the handlebar which looks pleasing. The headlight does have a different appearance than the Activa and Jupiter, so it does score marks here. However, the headlight ends up resembling the Suzuki Swish, which yet again does not fall in sync with the design except the front. 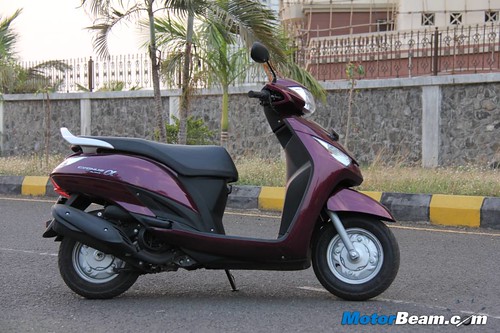 The side profile of the Yamaha Alpha projects a ‘long’ look, unseen in this category

The side indicators at the front and rear look disappointing, tail light is oddly placed and the shape is not pleasing either. The designers have tried to show that the indicators have a teardrop design but they are not executed well. The side profile of the Alpha was being designed to give it contemporary looks, but it ends up looking confused, depicts no flair and does not have character lines to catch up either. 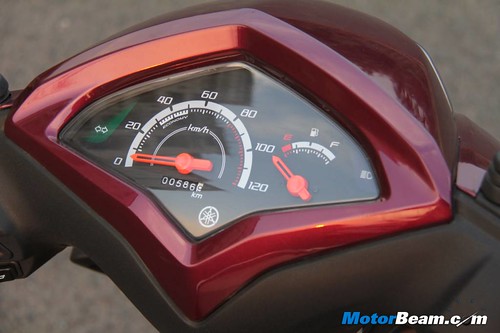 Instrument Cluster and Switch Gear – The instrument cluster has some flair due to the coloured body panel which houses the indicators at the front to the instrument cluster at the top (it’s one huge piece). Basic switchgear and instrument cluster with needles being borrowed from the Ray are present on the Alpha. The odometer, fuel gauge, solitary indicator light remain the only things to be displayed in this scooter’s console. 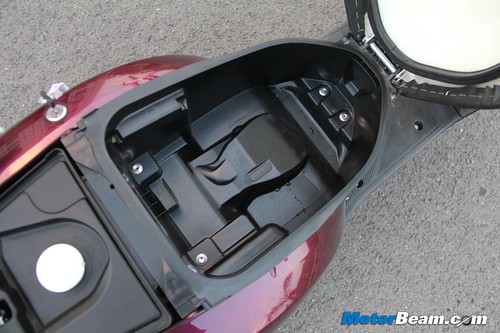 Practicality – The Alpha now has a wide and long comfortable seat. The seat has the right balance of cushioning and is equally suitable for short and small rides. Seating position is upright and visibility is good at the rear due to well-positioned rear view mirrors. Floorboard was a weak link for the Ray and the Alpha corrects it by a huge margin. Floorboard space is the same as any other scooter in the segment. The Yamaha Alpha has only one hook to carry bags. The scooter yet again, like the Ray, misses out on the left brake lever clip to stop rolling on slopes. The Alpha sets a benchmark by having 21-litres of under seat storage while the Ray had a puny 15.5 litres. The long body has helped Yamaha to liberate immense space inside including a separate pocket to keep documents, first aid and tools. The rear grab rail resembles the Activa’s and is made of aluminium which is comfortable to hold for the pillion. 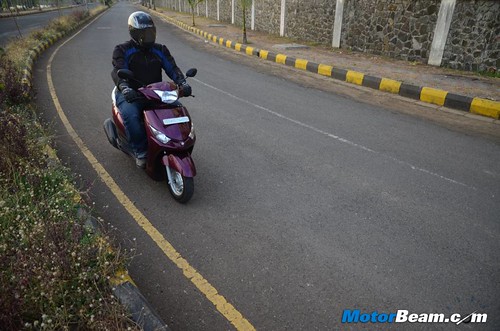 Performance and Gearbox – The Alpha has a 113cc engine which is carried over from the Ray. This mill is terrifically refined and smooth in nature because of the all aluminium structure. Starting up the engine is also a delight because of the digital noise which is unlike any other scooter. The Alpha produces 7.1 PS of power at 7500 RPM and 8.1 Nm of torque at 5500 RPM, having a roller type rocker arm in the cylinder head with a free piston which makes the best use of air and fuel ratio. Performance is brisk and off the line the Alpha feels quicker than any other scooter. Low and mid-end torque is where the Alpha feels at home. Roll on the throttle in moving city traffic and the engine always has abundant torque to keep you pushing forward. 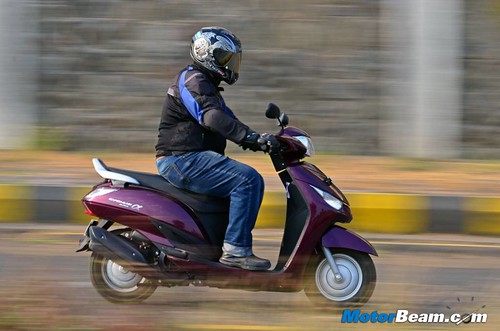 The 113cc motor is peppy and offers linear performances, mid-range is strong

The engine feels peppy and throttle response is linear. The Alpha feels at home in the city but lacks top-end power like other scooters which offer marginally more top speed on the highway. This Yamaha strongly pulls from 30 km/hr to 60 km/hr, while most of the competition pulls from 50 km/hr to their top speed. City drivability as we can see, is bang on. When we had the Ray with us for a long term, we did mention that this is the only scooter with best in class highway efficiency numbers and with the same engine being carried over and no added weight, it still remains the most economical highway friend to the consumer. Returning 40 km/l in the city is what we got during our test run. Numbers are bound to increase after first service. The Ray used to fetch 47 km/l in the city and 52 km/l on the highway.

Riding Dynamics – Based on the same platform as the Ray, the Alpha gets all the sportiness when it comes to the ride and handling department. Stiffly sprung telescopic forks at the front and single sided rear suspension makes sure the Alpha is quick to turn and has a lot of reassuring grip. Excellent grip is also courtesy of the fabulous tyres provided on the Alpha, just like the Ray. All this is achieved with the same wheel and tyre size as any other competitive scooter in the market. Like we always say, tyres are extremely important and the Alpha proudly displays its abilities and marks the enthusiast true in this regard. 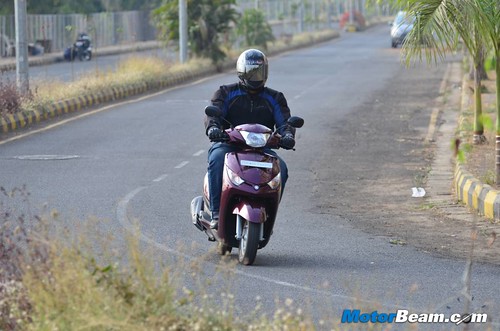 Ride quality of the Alpha is much improved over the Ray, the suspension is pliant

Ride quality has been the minus point of the Ray and now it’s sorted when it comes to the new Alpha. When comparing the ride quality over the Ray, it has seen a drastic improvement. We confirmed tyres pressure (stated by manufacturer) to double check the fact. Short wheelbase and engine being stressed member makes the scooter very compact and helps reduce mass and center of gravity. Weighing exactly the same as the Ray despite increase in dimensions and body panels was a much needed feat and Yamaha has managed to do so. Coming to the brakes, we always loved the brakes of the Ray and the same are carried over. Excellent feedback and stopping power. There is no doubt that the Alpha remains the most dynamic rich scooter in the entire Indian scooter market right now. 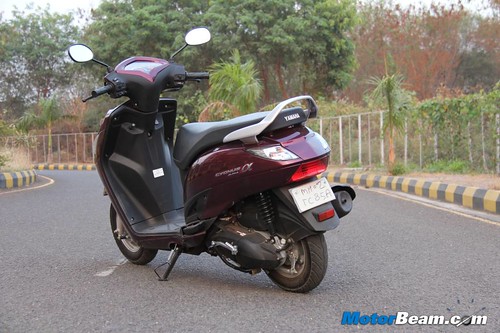 Verdict – The Yamaha Ray was the best scooter, as you all know since we suggested everyone to consider it when you asked us for help (it was also our scooter of 2012). The Yamaha Alpha is a very strong product from Yamaha’s portfolio indeed. The Alpha manages to set new records in terms of practicality and carrying the reassuring Yamaha DNA which includes quality and excellent fun to ride characteristic, making it a tempting buy for the customer. There is nothing from Japanese manufacturers in the 110cc segment except the dated Activa. Suzuki is yet to launch the Let’s. If you are looking for a 110cc Japanese scooter, look no further than the Yamaha Alpha.

The Yamaha Alpha is a value for money scooter when considered over the Ray or other Japanese offerings. It will be the pick of the lot for people who want their scooter from the land of the rising sun. 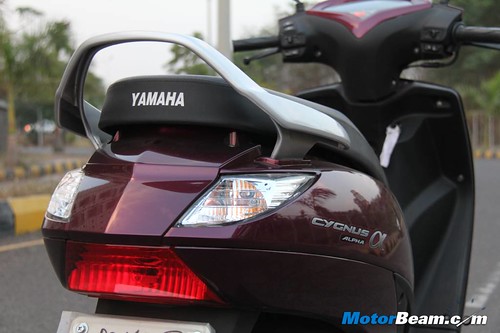 The Alpha is a well finished, high quality product from the most loved motorcycle brand

* Styling subjective to others
* Missing goodies at this price point 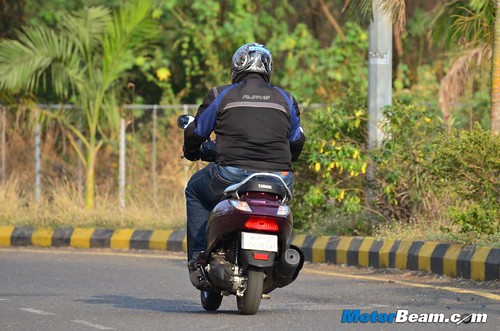 Is the Yamaha Alpha a dead end to the 110cc scooter segment? We will see!