Since the Yamaha R15 V3 road test review went online, everyone started asking us to compare it with some bike. The best option we picked up was the Bajaj Pulsar RS 200. Both the motorcycle come at the same price range. And even with a difference in power, the age group of people buying both of them is the same. It took some time but we got both the R15 V3 and the Pulsar RS 200 in a head-to-head battle. Which one do you think would win?

Motor Quest: Yamaha has been updating the R15 with different variants while the V3 has seen the maximum number of changes. The flagship Pulsar from the Bajaj line-up has been the RS 200. The recent changes the RS 200 has gone through include AHO with BS4 and a new colour/sticker scheme. 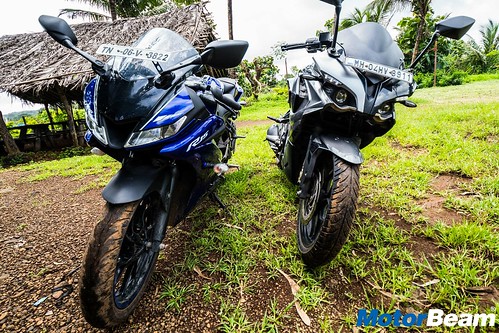 Styling – The Yamaha R15 in its V3 avatar has had the maximum changes so far. From the V1 and V2, the design language is now sharper and aggressive. The colour and the plastics feel like they have dropped quality but the R15 is way more attractive now. The Pulsar RS 200, on the other hand, has had no changes in the design department right from its launch. Although in the BS4 version, the colour scheme and graphics have become simpler and more likeable now. In a head to head comparison, the Yamaha R15 looks fresher and more attractive than the Pulsar RS 200. 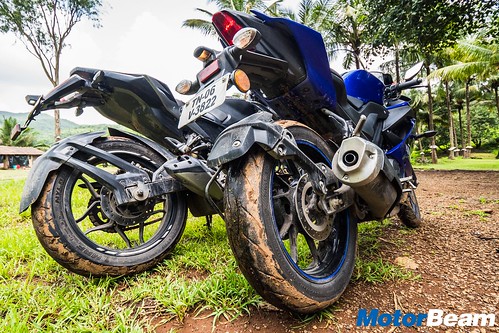 The R15 is the better looker at the rear, no contest here

The Pulsar RS 200, however, is an eye candy for a few as the dual projector headlamps look really good. They actually do a better job than the LEDs on the R15. The Pulsar RS 200 does not inspire its design from anyone specific, unlike the R15. The Yamaha R15 V3 has its rear tail matched with its elder siblings, the Yamaha R1 and the R6. 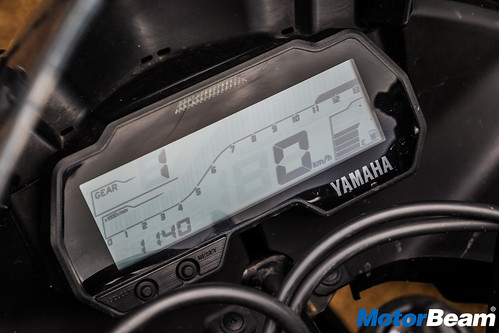 Instrument Cluster and Switchgear – The instrument cluster on the Yamaha R15 is now completely digital whereas the one on the RS 200 has been the same analogue-digital unit. The cluster on the R15 is rectangular in shape and smaller in size than the RS 200. The numbers are, however, easily readable on the R15 whereas the cluster feels too cluttered on the RS 200. Yamaha’s console is more feature rich as it shows a lot of information including fuel consumption and gear position which is missing on the Bajaj. 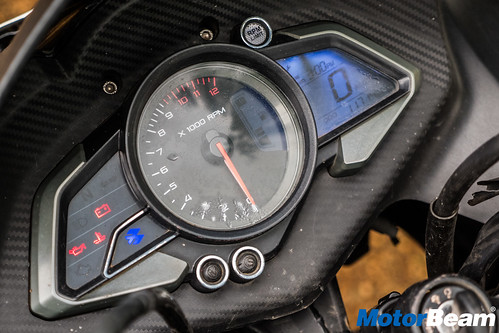 The same cluster which does job on quite a few Bajaj bikes, looks dated 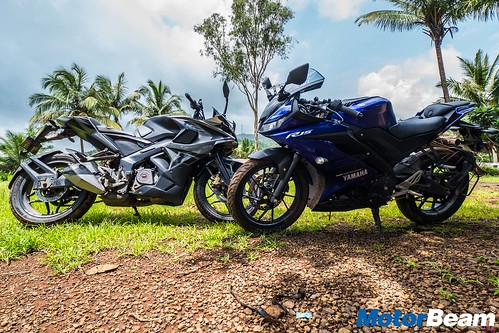 Ergonomics – The Yamaha R15 and the Pulsar RS 200 have very different ergonomics. The R15 has a very aggressive riding posture whereas the RS 200 has a more comfortable yet committed posture. The seat height of the R15 is 815 mm while the Pulsar sits slightly lower at 810 mm. The cushioning is more comfortable on the RS 200 than the R15. The footpegs on the R15 are more rear-set than the RS 200. Ergonomically, the RS 200 stays committed as well as comfortable. But the R15 has the better-suited ergonomics for a track day getaway. A pillion would prefer the RS 200 over the R15 as the seat is easily accessible on the Pulsar.