Hyundai unveiled the Veloster at the 2012 Auto Expo. The company has been marketing the vehicle in India aggressively but doesn’t plan to launch it anytime soon. However there’s a good possibility that Hyundai will introduce its very unique Veloster in India in the next few years. We check out the Hyundai Veloster and figure out what makes it an owner’s pride and neighbour’s envy!

That Hyundai is becoming a formidable player in the global motoring scenario is a fact now beginning to be acknowledged by even once dominating European, American and traditionally conservative Japanese manufacturers. Hyundai’s meteoric rise is a result of a very well thought and executed product policy which now also includes jaw dropping design, significantly improved build quality, impressive strides in engineering and class leading features in exceptional value packages. 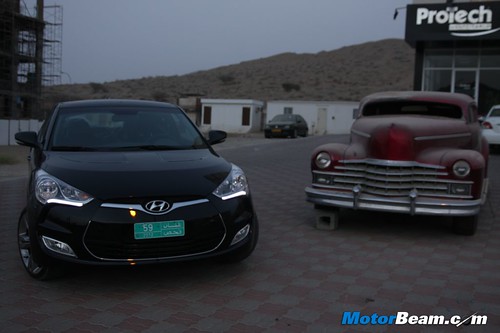 While the above has helped Hyundai to rake in numbers globally, it hasn’t stopped the car maker in exploring new avenues. One such idea was an unusual concept (code name HND-3) which was showcased in some motor shows during the period 2006-07 when Hyundai was looking for an appropriate replacement for its outgoing Coupe (also known as the Tiburon in some markets). With an extended agenda in mind at a time when the market was beginning to signal downsizing, Hyundai’s product planners were quick to grasp the scenario and decided to create a car with fewer doors that would conveniently slot in-between the Accent three-door and the Elantra sedan but have enough space for five adults and also be stylish and practical. This quirky layout also meant that such a product was poised to contend with sports coupes and hot hatches alike.

Hyundai’s Namyang Design Centre went beyond the usual convention and created a profile for the Veloster that not only incorporated the current corporate Fluidic Sculpture language in a compact hatchback style but also ensured that it was a genuine standalone. As a result, the biggest departure from the norm comes in its unique asymmetrical door layout. The Veloster which sports deeply sculpted sheet metal, gets one door on the driver’s-side and two full sized doors on the passenger side. Interestingly, the visual balance and profile has been designed in such a way that it doesn’t interfere with the dynamic elements of the car. That unique door layout doesn’t have much impact in the overall look of the Hyundai Veloster which remains quite faithful to the original concept. 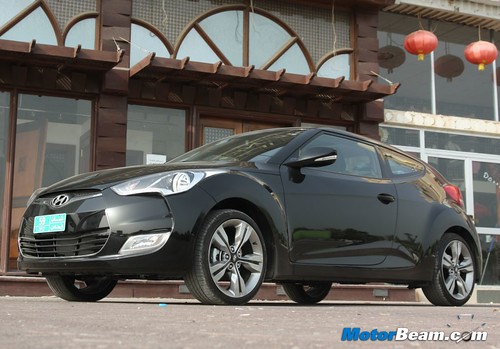 To call it aggressive on all fronts would be something of an understatement. Familiar design cues are evident mostly at the front section of the Hyundai Veloster, especially, the corporate grille in an aggressively designed valance with lot of character lines. The headlamps have been stretched and the bonnet has psuedo air scoops. The blacked-out A-pillar leads to a floating roof-line which extends smoothly all the way back to the rear which abruptly ends with a short rear overhang takes some inspiration from a sports motorcycle. The rear hatch opening is quite large and ends just above the rear passenger seats. It also features two-piece rear glass to improve what looks like limited rear visibility. The rear is also signed off with interesting character lines and what catches the eye are interesting detailing like the centrally-placed dual exhaust tips, deep indents around the taillights and pronounced wheel-arch flares. For a hatchback profile, the Hyundai Veloster is designed to be aggressive, busy and somewhat funky. Whatever people would like to call it, it’s a definite stand out and crowd puller. 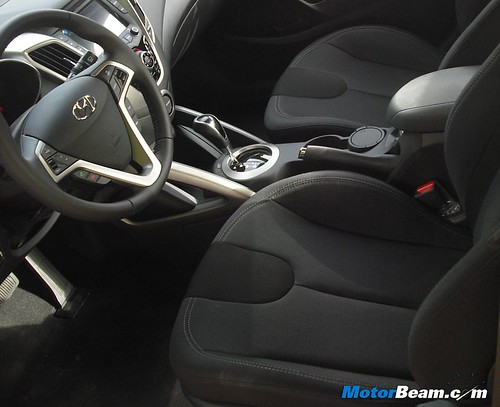 From the driver’s side it is a coupe, from the passenger’s side it is a hatchback with a front and rear door. The benefit of this arrangement is that unlike conventional coupes, getting people and cargo into the rear of the car means the driver has to reposition the seat all the time, in the Veloster, it’s like cool breeze. The cabin is busy and has space for five adults with good head, leg room. The car’s interior also sports youth-oriented detailing, be it the instrument cluster or centre console. Besides a push-button starter, the air vents are inspired by motorcycles, while the floor console mirrors the seat of a bike. Metallic accents are generous throughout the interior. 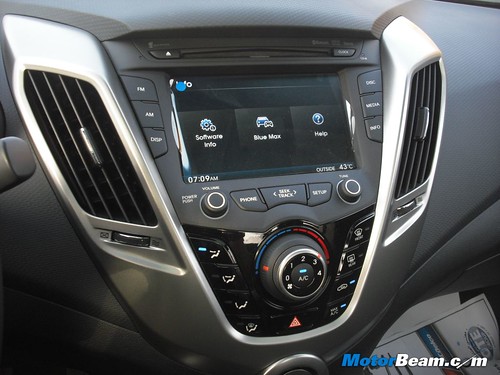 Adding to the ambiance are alloy pedals and a leather wrapped steering wheel. In terms of mod cons, there are no corners cut, Bluetooth connectivity, iPod or MP3 ports are all there along with a LCD screen in the console. One of the display’s unique features is an Eco Coach scoring system. This system acknowledges fuel-efficient driving with an eco rewards score and it accumulates points over time for a total Eco Score. The Eco Coach also provides instant fuel economy feedback so drivers can compare their average fuel economy. Clearly, Hyundai’s investment in the interior has paid off, the materials are all high quality and all of the switchgear feels expensive, besides cool details, like these 3-dimensional door handles. In terms of accommodation, the car is cosy and comfortable for four adults. 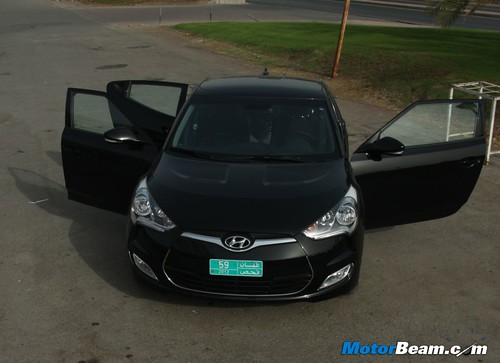 While the car has been designed to accept two powertrain options, normally aspirated and turbocharged, which are available in major markets, in Oman the former set-up is only available as of now. Considering the fact that the 1.6-litre four-cylinder Gamma series benefits from gasoline direct injection technology and dual continuous variable valve timing (DVVT), it means that the Hyundai Veloster should be much more frugal than what its aggressive sheet metal suggests. The engine produces 138 BHP of power and  a peak torque output of 165 Nm at 4850 RPM. This motor is mated to a dual clutch 6-speed automatic gearbox also known as DCT. The powertrain combined with the kerb weight of just 1174 kgs ensures outstanding highway mileage of around 27 km/l. 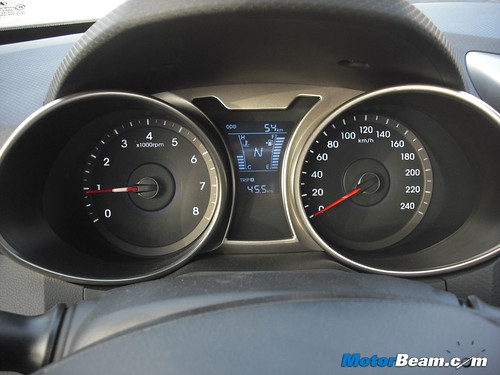 Veloster has an exceptional level of standard safety features for the segment and has also earned top five stars in European NCAP. The car also has an assortment of active and passive safety features such as Vehicle Stability Management (VSM) system which optimally manages ESC (Electronic Stability Control) and the Motor-Driven electric Power Steering (MDPS). The test Veloster featured dual front airbags and braking package includes four-wheel disc brakes [ventilated up front /solid at rear] and an Anti-Lock Braking System (ABS) including Brake Assist, which provides maximum braking force when a panic stop is detected, and Electronic Brake-force Distribution (EBD).

Driving impressions – The view out the big windscreen is good while the visibility to the rear is acceptable and any shortfall is made up by decent-size side mirrors which are handy especially in blind spot management. With a height-adjustable driver’s seat and tilt-and-telescope steering wheel, it’s easy to find a good driving position. Surprisingly, the seat belts are not height adjustable in this car. 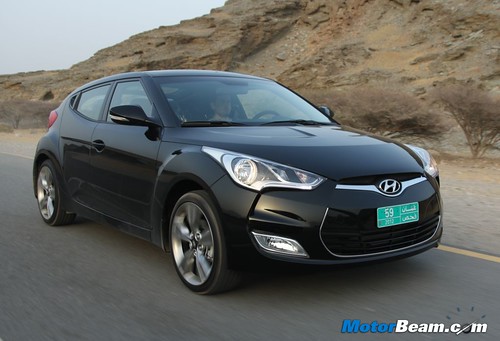 While we are aware of the engineering details, when compared to the other vehicles in the segment, we do expect the weight-saving and efficiency efforts to pay dividends in the handling and performance departments. As in most modern cars these days which are built around efficiency and sport electric power steering set-ups, there’s a flip side to the perceived benefits. One is that fuel efficiency is good at the cost of driver involvement due to a less involving feedback from the steering when compared with hydraulic assisted systems sports cars. One of the cars we recently tested was the new Porsche Boxster where engineers have tried quite hard to get some involvement and we are happy to note that while the Veloster isn’t an all out sports car, at least its tight suspension and steering wheel keep the driver entertained to some extent. It tracks reasonably straight on the freeway and feels good in the curves. We would normally expect that after a turn manouevre, the steering wheel would correct itself, but this doesn’t happen and here the driver has to instead prepare it in advance for its next major assignment. 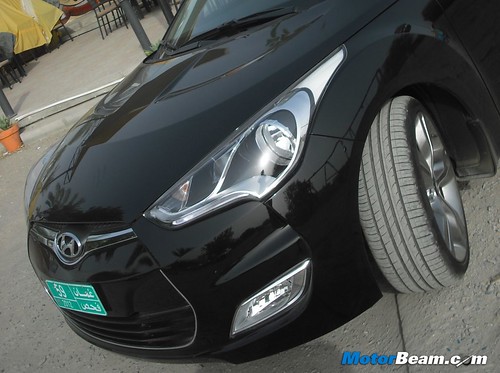 Although, the Hyundai Veloster is a compact, it feels much bigger on road, thanks to its superb suspension set-up. While firm enough for everyday driving, the ride is comfortable without being soft. While the car has a wider track and wider tyres its short turn-in makes it a delight to manouevre inn tight spaces. In fact, the Veloster’s turning radius of 5.2-metres betters the MINI’s 5.35-metres. Steering feedback from the electric set-up as expected is mostly neutral but the quick ratios allow for crisp feel. This aspect along with the chassis allows some sharp or fast manouevring around corners.

While appreciating the car’s powertrain set-up and engineering priorities, the normally-aspirated engine which offers low peak torque at a high 4850 RPM has a healthy reserve, but it has to be cajoled a bit to allow that extra to be extracted. The lower operating range of the car is consciously programmed for day-to-day use and this is one of the key strengths of the set-up and to expect this car to perform like an outright sports car would be unfair. Actually, Hyundai has reserved that job for the turbo variant. 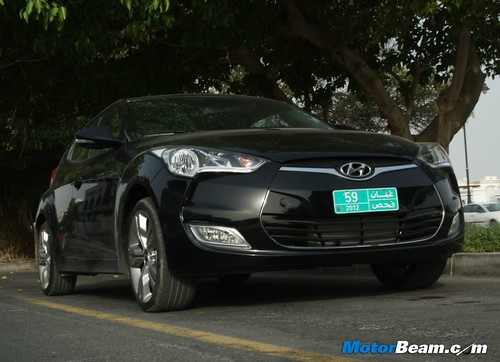 One of the nice things about the car’s transmission is that it takes the benefits of a manual transmission, including low fuel consumption and sporty driving, and blends them with automatic transmission benefits. The shift quality is smooth and since torque transfer during shifts is virtually uninterrupted, the car’s acceleration response feels much better, despite its small displacement engine. 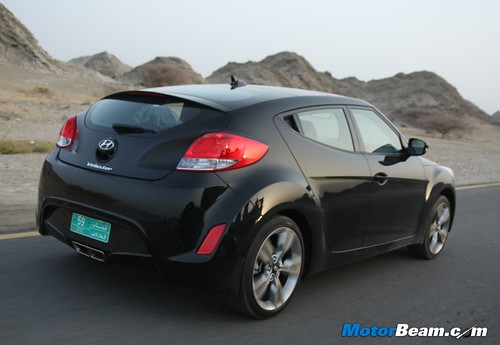 Verdict – The Hyundai Veloster is a unique departure from other cars in the same price bracket. The vehicle looks gorgeous and drives well too. While it might not be an out and out sports car but it does offer an involving drive. The interiors are very well laid out and the Veloster is loaded with features. It can be positioned right above the Verna and below the Elantra, thereby costing around Rs. 12 lakhs. The vehicle showcases innovative engineering from Hyundai and proves that you don’t have to break the bank to arrive in style. The practicality and performance are just icing on the cake.

Hyundai Veloster R-Spec Is For The Purists