Bajaj has been under a lot of pressure lately and it has all to do with the Discovers. Discovers came, saw and gained 24% market share and then two years down the line, the share dropped to half at 12%. Critics from the nation have been asking Bajaj uncomfortable questions like what is the next step? How will things improve? How more profits and sales can be achieved? On the launch, Mr. Rajiv Bajaj clearly said they are focusing on the domestic market but also catering a lot to global markets and hence if the domestic numbers are low, the exports are doing overly well for them. Some products which do not seem to work at home turf are doing extremely well in export markets. Obviously as we know, a slew of Discovers came and slowly some of them are going as well. However, the new Discover 150 series comes in a segment which is the most competitive segment and so called upper premium segment as it is the 150cc segment which always has offered basic 150cc mills with basic layout and is a commuter oriented package when it comes to the competition. Bajaj has come to this segment and as always, has come with an edge and the edge is very sharp and could hurt the competition real bad. The Discover 150F and 150S are here to offer enormous amount of performance, value and style. Have they succeed this time with all the hard work they have done? We tell you, stay hooked. 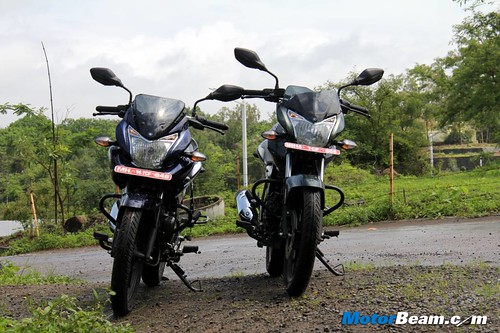 Styling – This is where the Discover seriously scores high marks. The muscular tank and the stubby half fairing on the F variant looks like a job very well done. Influences from the Hero Karizma are pointless as it is only one edge which replicates that too by a very small margin. The fairing is neatly integrated in the design and does not look out of proportion at all. Head-on look of the Discover 150F is puffed up from the sides which is one of the reasons why the overall front and front quarter looks pleasing to the eye, something which Bajaj is the master since day one. The new 3D logo on the tank in particular looks really good and adds glamour to the motorcycle at first glance. The Discover 150 in pictures and in real life look quite different. 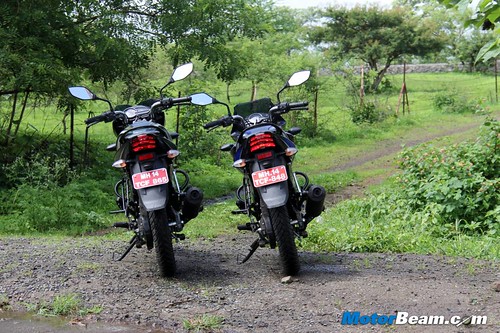 The long wheelbase and the overall high length of the the motorcycle gives it the aura of a substantial machine. Something which is even more accentuated than the naked versions which we have come across over time. Rest of the parts remain the same which includes tail-piece, mudguard, alloy wheels and LED tail lights. DC lighting comes as standard too. Overall, in terms of style, the Discover 150 will please the young buyer as well the commuter who seeks something bigger than what he pays for. 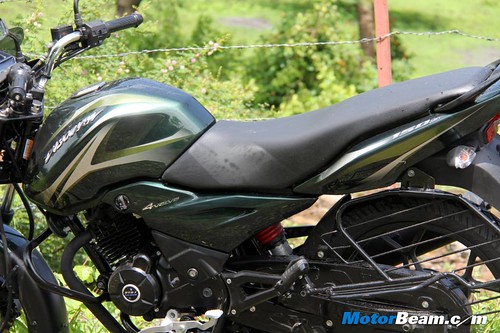 Ergonomics – The upright riding position is here as always thanks to the taller narrow handlebar and the foot-pegs which are in the middle rather than rear-set. The faired version feels quite narrow and won’t be any trouble while navigating city streets, something similar we have seen with the Pulsar 220 as well. Seats are super comfortable and are by far the longest in the segment. You can literally gauge at the seat for 10 seconds and after that it comes to an end. Seat height has also gone down despite it having a monoshock like the 125 ST. This is thanks to the re-worked subframe which also releases a lot of length to the seat. Mirrors are great but should have been mounted on the fairing rather than the handlebar as they turn out to be on the lower side and to counter that you end up sitting behind rather than sticking to the tank which most people do and like to do. Mirrors also have great adjustability as always so you can tweak it and they should be OK with normal-sized commuters. Needless to say, pillion comfort is on the top of the charts with that extra long seat.

Cluster on the left belongs to the F and on the right it is of the S, same features but F has a digital readout

Instrument Cluster and Switchgear – The meters are all new on the Discover 150F but the 150S has the same ones seen on any other Discover. Features are the same on both except the 150F gets a digital console on the side which shows two trips meters, fuel gauge and service due indicator, a Bajaj first for the Discover series. On the right we have tell-tale lights such as neutral, high beam, battery indicator and a glowing Bajaj logo. In the middle sits a speedometer which gets revised fonts and when you start the bike up, the needle does the salute by going all the way to the end of the meter. A tachometer is surprisingly avoided even on the flagship Discover, not a good move by Bajaj for a 150cc bike. Switchgear is good but feels minutely cheap and less intuitive than before. 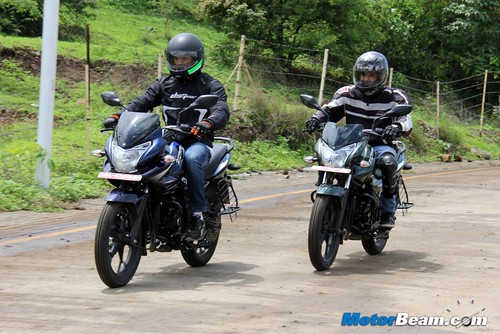 Performance – Powering these motorcycles is a similar 145cc engine which produces 14.5 PS of power at 8500 RPM and 12.75 Nm of torque at 6500 RPM. The engine is a bored out version of the 125 ST and has the same moly-coated piston, long air-intake hosepipe with other changes to the ignition and valve train timing. The fly-wheel on this engine feels to have been lightened and fuelling has also been revised. At low speeds, the engine does not feel heavy anymore and fuelling isn’t jerky either. The motor revs faster to the redline than any other Discover. NVH levels have been worked upon thoroughly and it shows. The engine is so silent at times that you can barely hear it at idle or when in the mid-range. There are no vibrations throughout the power-band but only at the top end of the rev range when revved hard in any gear, which in fact is also extremely well controlled. We have been telling you that refinement and reliability levels are going up with every new Discover and the 150cc avatar takes the game even forward. Mileage should be in the ball park of 55 to 60 km/l when ridden sanely.

Both the motorcycles have the same 145cc, 4-valve engine offering improved NVH and output than expected

After spending half a day riding the Discover 150 hard and fast and redlining, the engine or the gearbox despite being brand new did not throw even the smallest tantrum. This was not the case with earlier Discovers either which as we know are far more better than the first generation Discover by miles, so you can imagine this new engine finally matches its rivals in every aspect. Yes, it is that good now. This powertrain is by far the best Discover unit of the lot and even better than the very impressive engine on the Discover 100M. How does the power-band feel like? Well, there is a lot of mid-end power and shorter gearing makes drivability in the city by far the very best, thanks to all that power and torque and extraordinarily low kerb weight. Top-end is limited due to shorter gearing and top speed we achieved was 106 km/hr on the VBOX while the meter showed slightly more than 110 km/hr. The engine and low weight can make the top whack stretch by 10 km/hr but there is no point doing it as it not meant for that role. 60 km/hr is done in 5.71 seconds and 100 km/hr is achieved in 20.07 seconds which makes it quite fast despite the engine having not opened up yet.

Be in top gear and just twist the wrist and it goes. Overtaking is no problem whatsoever at high speeds thanks to four-valves breathing below you. 70 to 90 km/hr takes very little time but it does become very boomy, despite that it never fails to impress. Shifting gears up and down is not a hassle or a task anymore. Second generation Discover series motorcycles always had a very good gearbox and that kept improving but now let me quote what we say for Japanese motorcycles – “the gearbox is butter smooth”. We were so impressed that we did a lot of shifts for no reason and every single time the clicks were precise and easy to deploy. Bajaj on-road testing has finally paid off, the engine gearbox combo ALMOST feels next generation when considered in the product aspect. 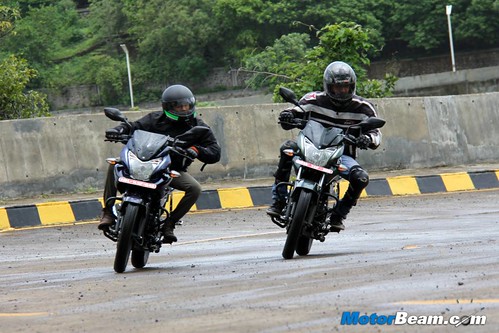 Dynamically too, the best performing in the segment and in the Discover series by far

Riding Dynamics – All that power and that low kerb weight needed to be handled differently and Bajaj has done it the very best way. Don’t be fooled by the moniker in the spec sheet saying it is the same semi double-cradle frame. It is that but the main tube which connects the chassis and the head is now a single round tube rather than the conventional double tube or rectangle tube, something which is found on the Yamaha FZ and Honda CB Trigger. That one change makes the motorcycle poles apart from earlier Discovers. The Discover 150 feels very agile despite it having a very long wheelbase. The less kerb weight and very stiff suspension makes it go around corners very well. Albeit a bit slow to turn-in but an average joe or a normal commuter will be happy with the agility it offers which is similar to the CB Trigger which scores aces in agility. 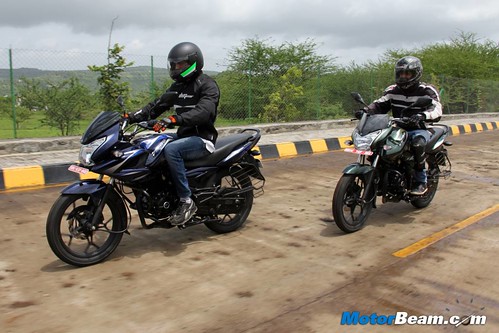 The Bajaj Discover 150 is immensely stable at high speeds and while making direction changes at those speeds as well, courtesy of that long wheelbase which makes its presence felt but does not interrupt from the joy of riding the bike. Ride quality is good and our pre-load was set on #2, it was even good thanks to the 100 section tyre at the rear. Brakes are good too and come from Endurance. Initial bite has been improved on the disc variant from the earlier model due to more power on this bike. Drums as always do their duty well. Bajaj has clearly put a lot of thought behind the Discover 150 in every single aspect to make it a complete package without any niggles for sure. 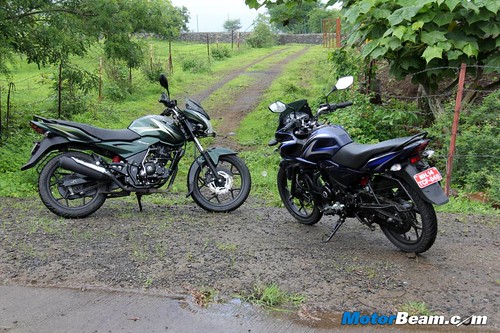 Verdict – The Discover 150 nails it this time in every aspect. Small niggles have been taken care of and all of that makes the Discover 150F and 150S very appealing products. The engine and gearbox are extremely refined, the handling is fantastic and it offers everything to everybody. Even an enthusiast can be happy with the peppy performance it offers and styling will keep every buyer of the market happy. In terms of value, nobody beats Bajaj as always and in fact the base drum variant tries to fill the gap where the 125cc motorcycles from competition are priced, making the 150cc Discover insanely tempting. With quality, reliability and refinement levels reaching the competition levels, there is no reason why you should not upgrade and get either of these variants because you do need some Josh in your life, don’t you?

The Bajaj Discover 150F is quite close to rivals in terms of refinement and quality now. The value for money tag and performance has always been there at the top. If you are seeking for a powerful upgrade at the price of a 125cc motorcycle, there is obviously no other option in the market except the Discover 150. 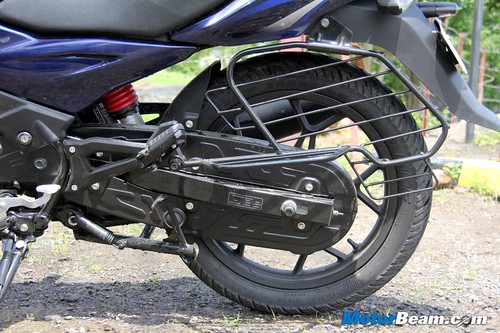 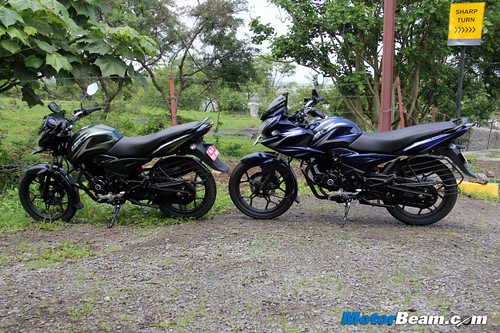 Looking for a powerful, value upgrade in the commuter segment? This is it