The Street 750 might be the cheapest Harley but cost cutting is evident, in abundance.

I will be honest with you, I am not a big cruiser fan yet I have been waiting with bated breath to get astride Harley-Davidson’s Street 750 right from the day it was unveiled prior to the Milan Motorcycle Show last year. In fact I have requested Harley-Davidson a multitude of times for a chance to ride their latest offering and now when I got a chance to do just that, I feel a bit disappointed. The Street 750 in no way does justice to the American brand. While bookings are open, there is yet to be any review of the Harley-Davidson Street 750 but here is our first impression which tells you what you need to know. 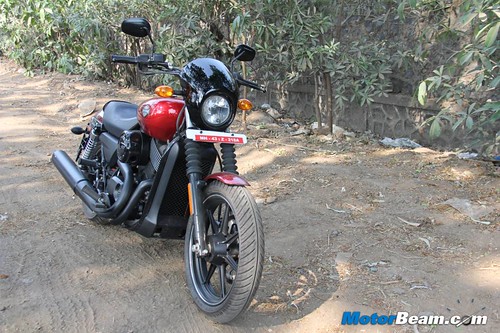 I saw the bike from a distance and immediately appreciated the styling which is in sync with what a cruiser should look like but get closer and that’s when you realise quality is poor and cost cutting is vastly evident. Harley has appointed the “wrong” vendor/supplier for the Street 750. This is shocking as India will serve as the export base for not only Asian markets but also for some European countries. In fact I was so surprised at the quality of the bike that I quickly wanted to know if this was a one off with our test bike. I quickly opened high resolution pictures of the bike, shot at the Auto Expo and yes, those bikes too were as bad on the fit-finish front but since they were black, it wasn’t so apparent. The bikes which are exported have different tyres and brakes for sure. 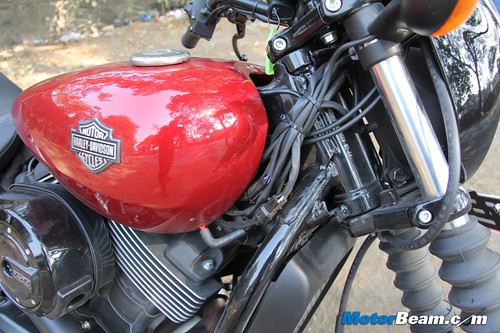 Lot of exposed wiring on the Street, some wires don’t even have heat wrap

So what’s wrong with the quality? There is a lot wrong actually. First is the wiring, there is a lot of it and it’s very exposed too, right near the steering (before the tank starts) to the rear brake (blue colour wires visible) and the horn has two open wires which are spotted at first sight. While most critical wires are heat wrapped, some of them are exposed and you can see the blue, red wires hanging out openly. Fit and finish isn’t good either at most places and you can see poor welding and lack of symmetry in quite a few areas. Paint job is good but not excellent while the indicators are very flimsy. The fuel lid doesn’t have a flap mechanism and comes out right in your hand! Very cruiser-like you might think, but it’s time things should change for the better. 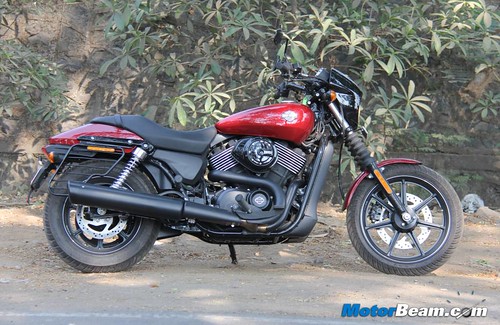 Get past the poor wiring and look closely at the parts used and you will be in quite a shock. Harley-Davidson has used Endurance for the brakes and forks which is really cost cutting to a new level for this cult brand. Bajaj Auto, whose earlier Pulsar bikes were known for poor quality, stopped using Endurance and shifted to KBX and they are currently using ByBre equipment. The Pulsar UG3, that was in 2008 and six years later, Harley is using sub quality parts on a bike which is a premium product after all. The rear brake master-cylinder is a decade old. Can you believe it that the footpegs don’t have springs and when you ride the Street 750, you inadvertently tend to close the pegs. 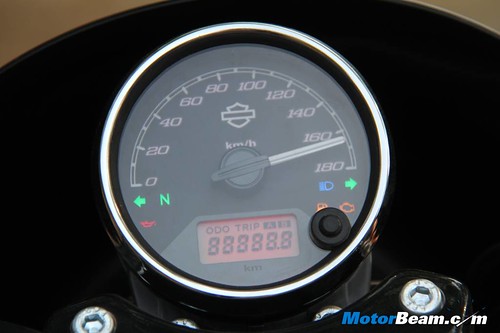 The instrument cluster consists of one large round pod which has a analogue speedometer with tell-tale lights in them and a LCD screen showcasing an odometer and twin trip meters. There is a button right next and the console gets a chrome lining. The switch gear is of good quality and is soft touch use, you need not put in efforts to operate. The bike gets daytime running lights while the mirrors are small and don’t offer a clear view of what’s behind, more so for riders who are broad or those riding with a jacket. 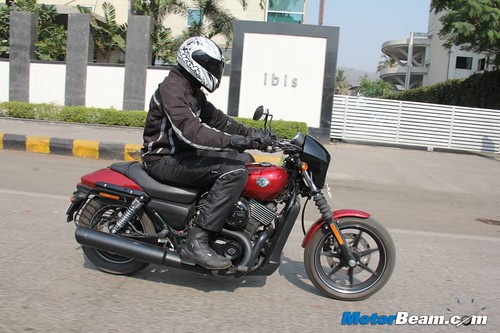 Harley-Davidson says that the Street 750 has been made for the urban environment and for newbie riders. The seat height is too low, in fact if you are above 5 feet 10 inches in height, you are going to face a problem with your hips taking the beating. This is one bike which Americans themselves won’t find comfort on as most are tall in the States. The problem is amplified as the foot pegs which although front set aren’t as front set as you usually see in cruisers. Thus tall riders aren’t comfortable on the Street 750 for sure. The seat is soft though but the pillion seat has little room, nor does it have anything to hold on to. 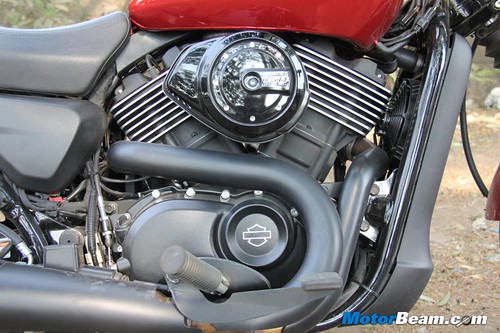 Thumb start the 749cc, liquid-cooled engine which Harley likes to call Revolution X and it settles into an unrefined idle, you can hear the loads of moving parts in the engine. The engine is smooth but tends to heat up a lot in stop-go traffic. Power is channelled to the rear wheel via a belt drive and we estimate close to 58 horses being on tap while the torque is revealed to be 60 Nm at 4000 RPM. The engine has decent pep lower down with a stupendous mid-range, it pulls the Street 750 to triple digit speeds in a jiffy. In fact, performance from this V-Twin motor is the best part of this bike. First gear is good enough for 55 km/hr and the 6-speed gearbox is relatively smooth but finding neutrals is close to impossible (no false neutrals but when parking neutral is difficult to get). The Street 750 returns a fuel mileage of 20-25 km/l, which is good for a bike of this weight and engine size.

The Street 750 doesn’t sound like a typical Harley. While the company has tried to give it the same vocals, it lacks the bass and loudness of other Harley bikes. The 2×1 exhaust simply doesn’t sound loud and throaty, no where near the SuperLow either. However in spite of the weight, the Street 750 is quite agile and easy to ride in the city, being very nimble on its feet. The steering is light and handling is good too with the bike being stable through long sweepers. The Street 750 is underpinned by a double downtube frame with traditional telescopic forks at the front and twin shocks at the rear. The hard compound MRF tyres lack grip though and prevent you from pushing the motorcycle into tight corners. 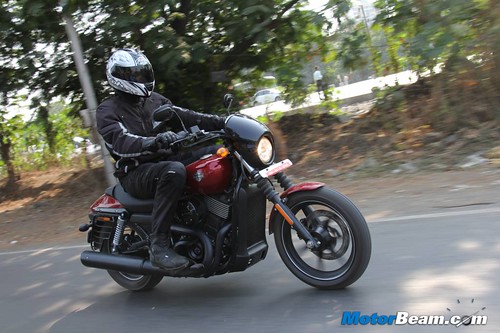 Ride quality on the Street 750 is good and it absorbs most bumps, it is stable at speed

The ride quality is very good and the Street 750 absorbs most of the bumps in its stride. The seating is upright with a wide handlebar making the ergonomics good for short riders. However both the brakes are poor, they lack initial bite altogether (cost cutting on the braking system becomes evident) and with so much performance on tap, there isn’t stopping power to match. At this price, ABS should have been offered, at least as an option. The Street remains stable at speed and with the engine not throwing out much vibes (in spite of being a V-Twin), you can cruise at high speed for long. 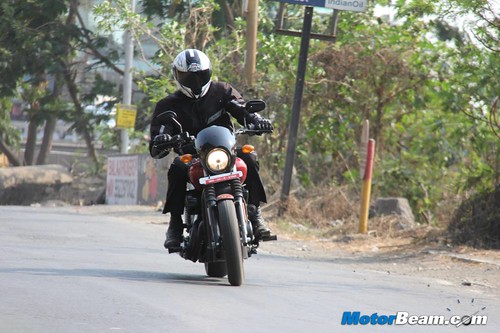 I shouldn’t really be doing this but since I was riding another cruiser yesterday, the Hyosung Aquila 250, I am left with no option but to draw parallels to it. The Aquila has much better quality than the Street, there is no visible wiring there and in spite of not having a rear disc brake, braking performance on the Hyosung is miles better than the Street. To Harley’s disadvantage is the weight of the Street 750, which weighs in a ponderous 218 kgs that blunts many a thing for the American bike. 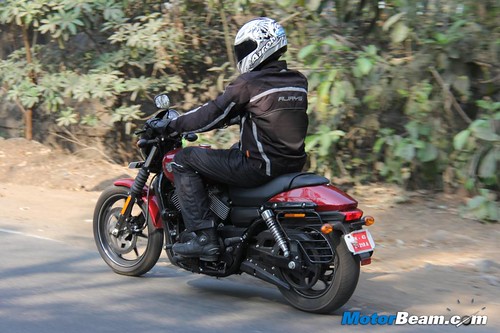 First things first, the Street 750 isn’t a true-blue Harley-Davidson, period. There are quite a few flaws and cost cutting is evident in plenty. In fact, with India emerging as a production base, we never expected Harley to have gone so wrong with the quality of a motorcycle which had high hopes riding on it. The Street 750 is a new platform for Harley in 13 years and we were hoping this bike would teach its elder siblings a lesson or two in terms of quality, refinement and engineering. Sadly though, the Street 750 falls short in many ways. Anyone buying the bike anywhere in India is going to be paying upwards of Rs. 4.5 lakhs, which is a significant sum of money and for that amount, the Street 750 just doesn’t cut it. If you want a Harley on a budget and are ready to live with the shortcomings, then the Street 750 is worth a consider but remember, you are paying for the brand and not for the product.

The Harley-Davidson Street 750 is a bike made to a price. It does offer strong performance and a good ride quality but as a package, it has quite a few shortcoming which are difficult to ignore. 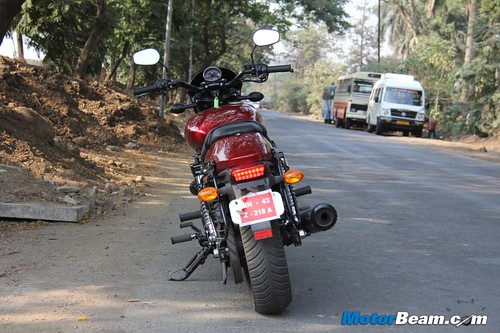 * Harley-Davidson motorcycle for the masses
* Easy to ride
* Performance

Thank You Harley-Davidson For Listening, We Told You So