The City has been a very important car in Honda India’s portfolio right from the beginning. A car which has taken the Honda ranks to the premium level in the mid-size sedan space. The City has been so popular with Indian buyers that even when there was no diesel engine on offer, it still outdid its nearest petrol powered competitor with relative ease. Known for its outstanding reliability and zero headache maintenance, the City has developed cult status and when Honda parked the new fourth generation City in our long term garage, we were more than happy to have India’s favourite mid-size sedan at our disposal. 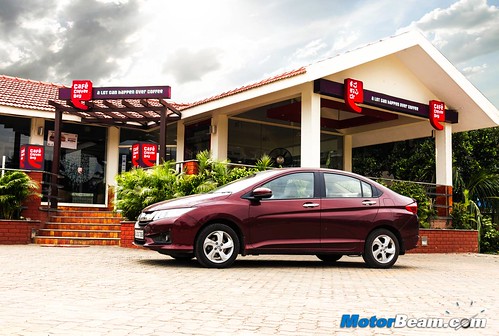 Honda has not played much with the styling and has been rather conservative on that front. The result is obvious. The City looks mature and bares lot of resemblance with the outgoing model, which is good and bad. The good bit is the design is more evolutionary and goes well with most, the bad bit is that is not flashy or something starkly different from the previous model. Chrome has been used well and the City looks quite pleasing to the eye but it isn’t a car which will wow you over with its design. 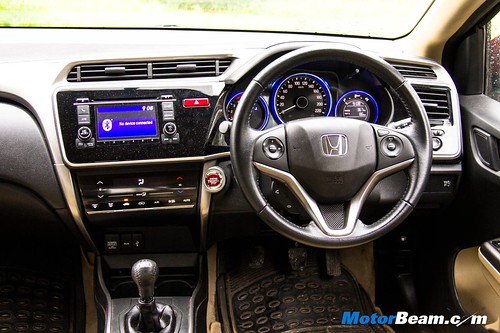 Nevertheless, it’s the interiors which have been loaded with features and there is abundant space too. Honda is the master of packaging and we have already seen this with the Brio and Amaze. The City is no different. There is so much more space at the rear bench, it’s almost the same as the Nissan Sunny, which is quite surprising since it does not seem so from the outside. Honda’s ‘Man Maximum, Machine Minimum’ principle along with clever packaging ensures that the interiors are roomy. We also love the electronic sunroof and the City is the only car in the segment to get one. The new dashboard design looks classy with the touch interface making it quite easy. The all black dash with the silver inserts freshens up things. The rear seat is quite comfortable and the rear AC vent keeps comfort levels in check even on very hot days. The front seats are comfortable too but we found upper back support lacking, especially on long drives. 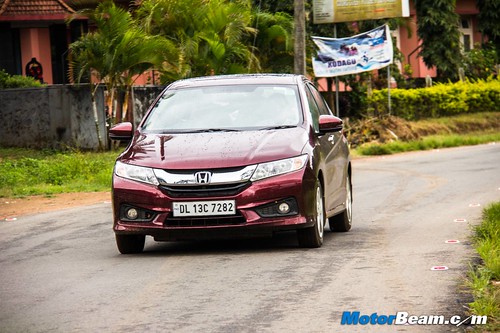 The 1.5 i-DTEC pulls cleanly but there is a distinct diesel clatter

For the first time in its history, the new fourth generation City is now offered with both petrol and diesel power plants. Honda’s i-VTEC petrol motor is known for its refinement but we wanted to take the all new i-DTEC to task, and hence our test car was powered by the 1.5-litre diesel engine. This oil burner is the same which does duty on the Amaze and churns out 100 horses and 200 Nm. Power delivery is quite good with a lot of pep on the go. The only kink in its armour is the noise and harshness. The NVH levels of the city could have been better considering the same engine in the Mobilio feels more quiet and refined.

The Amaze and Mobilio are electronically limited to 140 km/hr but fortunately Honda has kept this out of the City. This means the City is capable of stretching its legs far beyond 140 km/hr when needed but gets quite vocal as you go higher on the speedometer. Even with the 100 horses prancing away, the City is one of the most fuel efficient cars in country having an ARAI certified mileage of 26 km/l (for the base variant, which is lighter in weight). We have been getting between 15.5 – 16.0 km/l in the regular driving cycle. The 6-speed transmission has a tall sixth gear for highway cruising. One thing which helps the City in the mileage department is 175 section tires which are a bit too thin for our liking. Grip levels are average and we have already started noticing considerable wear with only 15,000 kms on the odometer (press cars are driven quite hard if that is any justification) but thicker rubber would have been more confidence inspiring. Ride is pretty impressive and handling too is quite good but again not in the same league as the Europeans and American in the segment. The suspension soaks in most of the undulations but can be a tad noisy at times. 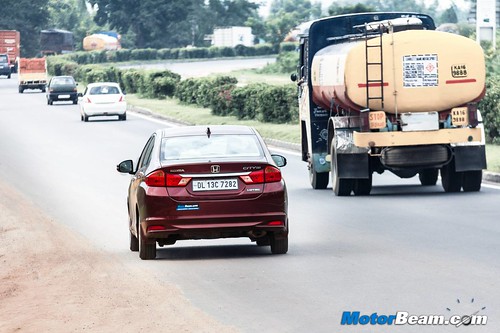 The City has been on the top of its game and has been doing good numbers consistently. It is the highest selling Honda car for sometime now which only goes to show the faith consumers have in the product. The City also emerged as the winner in our exclusive 8 car C-segment shootout earlier this year. As the City continues to enjoy cult status, one fact remains, that you just can’t go wrong with this Honda.