The TNT 899 is a complete hoot to ride, this motorcycle has pure unadulterated character

If you are in the market for a motorcycle or are a bike enthusiast who plans to buy a performance machine, this is the best time for you. After all, it has been a wild dream for most of us in India to even have a glance at a Benelli motorcycle but thanks to DSK Motowheels, we will soon be able to buy them with full service support and an attractive price too. Yes, you heard that right, one of the oldest motorcycle manufacturers in the world, Benelli has announced plans to launch five bikes in India in the next few months and among them is one TNT 899, a motorcycle which looks ugly in a wicked way (with its grasshopper lookalike headlight) but packs in some serious punch to amplify velocity in quick succession. Does the 899 make you go bonkers, we ride close to 300 kms across all sorts of roads to find out just that.

Motor Quest: TNT stands for Tornado Naked TRE (for Trellis frame) and the 899 is imported from Pesaro, Italy for local assembly via CKD kits in India. At one point of time, Benelli and Moto Guzzi were sister companies, owned by the same parent. 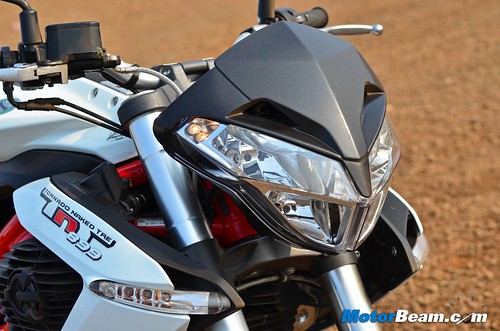 Styling – The Benelli TNT 899 competes with the Kawasaki Z800 and Triumph Street Triple but simply looks like no other bike on the road. While Kawasaki’s new styling language for naked bikes (especially the Z1000) has come across as futuristic, the TNT 899 goes one up by being extreme in a way which makes it look unreal. Designed by the same person who did the MV Agusta F4, the Benelli 899 has some really unique design elements which make it stand out, resulting in people ogling over the bike everywhere you take it. In fact, we faced a tough situation while shooting the 899, people stopped their cars and got out, some even requesting a picture of theirs be taken alongside it. 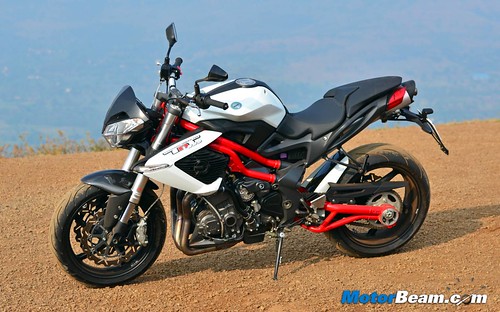 Aggressive as aggressive can be, the Benelli TNT 899 is extreme in design

The headlight looks angry like Decepticon and has a slew of LEDs which double up as DRLs. The crazily done up radiator fan placement on the plastic body work right ahead of the extension has side indicators neatly placed on it, along with the bike’s name. The red finished frame and swingarm are the major highlights of this bike, they gel well with the paint scheme of this aggressive street-fighter. There is some carbon fibre finish on the bike like on the front mudguard and around the engine. One can’t miss the patriotism of the Italians with the flag neatly placed ahead of the muscular tank. At the rear, the single under-seat exhaust (with carbon-fibre finish) will immediately catch your attention which is flanked by brake lights on either side. A super wide rear tyre further gives hints on what this bike is capable off. If anything, a tail tidy would be a nice touch on this Benelli. 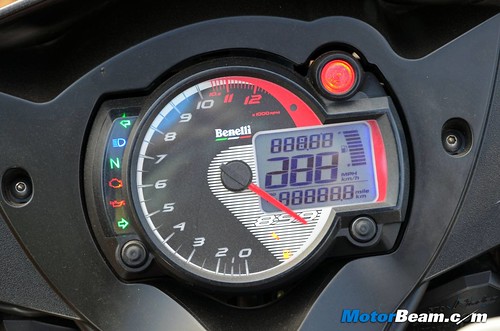 The console is easy to read and swings to the top, tacho takes prime spot

Instrument Cluster and Switchgear – The cluster can be divided into three distinct parts. The left most has a display for tell-tale lights while taking centre space is the tachometer that has a digital display on its right for odometer, trip meters, speedometer, fuel meter, temperature indicator and clock. The console is easy to read and on start up, it does a full swing, not just till the 12,000 RPM marked on the tachometer but all the way to the 899 text written in white on the cluster. The buttons are a bit hard to operate and on the tachometer are service due indicator and low fuel warning (the fuel meter blinks when you hit the 4-litre reserve). The switchgear has good quality and there are hazard lights too. There is also a shift light placed on the top right. 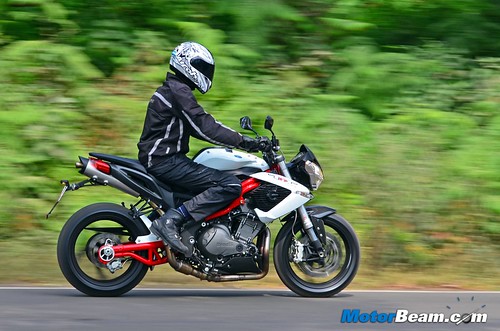 Comfortable riding position has a dose of sportiness in it, pegs are rear seat

Ergonomics – The Benelli TNT 899 has a seating position which is a mix of sporty and comfort, just like most street-fighter bikes in the segment. You don’t sit upright but neither do you sit in an aggressive stance, this helps you stay both comfortable and confident when riding this bike fast. Both tall and short riders will find the seat height adequate for riding this bike. The split seats (looks one piece but they aren’t) are a bit on the harder side although there is generous space for both the rider and pillion, the latter will however feel the heat from the under-seat exhaust and won’t be able to grab onto anything. The pegs are a bit rear-set while the leaf shaped mirrors are a bit small for our liking. All Benellis come with a unique key, it has a small blade type look and it flips open. The keyhole is placed a bit too deep behind the handlebar and does require some effort to operate the key in the ignition. 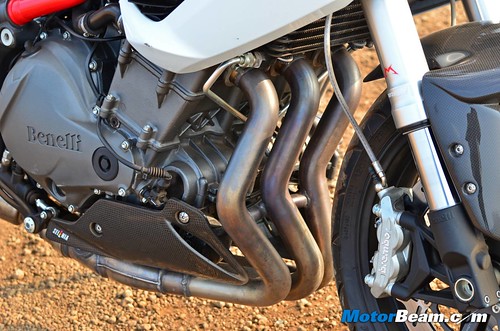 Performance – The Benelli TNT 899 draws power from an 898cc, 3-cylinder engine which uses 4-valves per cylinder and is liquid cooled. The DOHC unit has immense character, start the bike after pulling the clutch and it sounds a bit unrefined, sort of like a diesel engine with its clatter. That unrefined part turns into pure blasphemy as soon as you get past 4000 RPM, yes the motor suddenly turns super smooth and there is so much poke that it freaks you out and it’s just the mid-range we are talking about yet. With 118 Italian stallions sitting at your right hand’s disposal, the Benelli TNT 899 isn’t very powerful for a bike of its displacement category but hell yeah it’s fast. 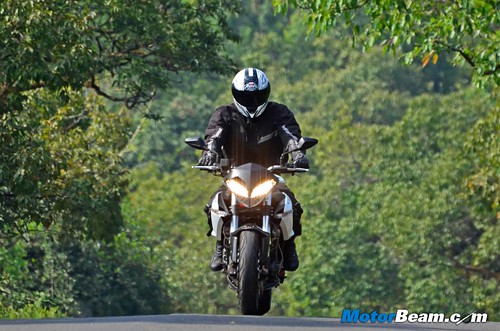 The Benelli TNT 899 has an engine full of character, it feels thoroughly alive

One you hit the mid-range of the TNT 899, it seems like a turbocharger just kicked and bang, POWER

The triple-cylinder engine redlines like an absolutely beast and that’s at 10,500 RPM, getting there takes time as the over-squared motor is tall geared. Thus redlining the bike in every possible gear requires balls of steel as the intensity with which it takes off is truly something. The note from the 3×1 exhaust is intoxicating and if you don’t control your right wrist well, you would likely be pointing to the sky, power-wheelies are instant and unplanned. The 899 TNT pulls to the double ton without any hiccup and you give up before this potent powertrain does. Matched to this engine is a smooth shifting 6-speed gearbox and finding neutral was never a problem, the clutch being well weighed too. 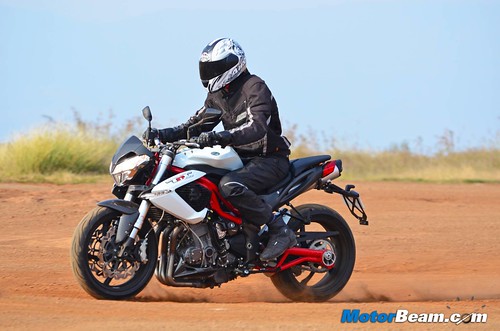 However, it’s not all about redlining in every through every cog to extract the best out of the Benelli TNT 899, one can also tap into the tons of power in higher gears, in-gear acceleration is stupendous. The motor has just so much grunt that at times you feel you are in a lower gear, while actually you are two gears higher. One can ride from 55 km/hr to 240 km/hr in sixth gear alone. Yes, that’s right, riding at 55 km/hr in top gear doesn’t give the motor any hint of uneasiness, the 899 just does it with super refinement and when you flick open the throttle at such a low speed, 150 km/hr will be seen in an instant, you grabbing the handlebar tight. 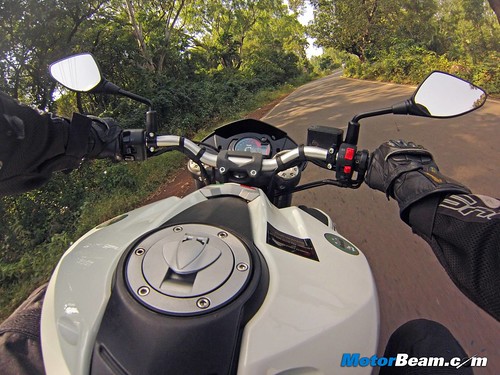 What is really exceptional about the Benelli TNT 899 is the smooth and sure-footedness with which it does clutch-less up and downshifts. This makes it easy to nudge past 100 km/hr from standstill in a quick 3.5 seconds. The motor is quite tractable at low revs, making city riding a breeze and the placement of the fans on the sides (not very practical if the bike falls) along with fantastic heat dissipation ensures no heat comes on the rider’s knee. The bike should return 20 km/l when ridden sanely but when you whip open the throttle like a hungry werewolf, don’t expect it to return anything more than 15 km/l. 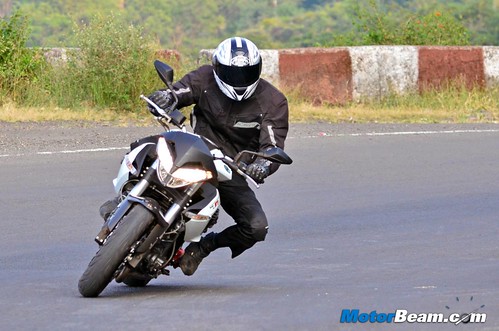 Riding Dynamics – The Benelli TNT 899 is armed with one of the best underpinnings and that goes a long way in making it a potent machine. The bike does weigh a lot (still less than the Z800 though). The weight can be felt when you are taking u-turns but once on the move, the extra kilos on board play at an advantage. High speed stability is excellent and even at 200 km/hr, there is absolutely no feel of float but that’s also because of the stiff suspension which affects the ride quality in a negative way. Our roads are far from perfect and every bad terrain is amplified when astride the TNT 899. With Marzocchi upside-down forks at the front and a Sachs monoshock (both adjustable), this Benelli is quite eager to corner but the weight does affect its flick-ability. 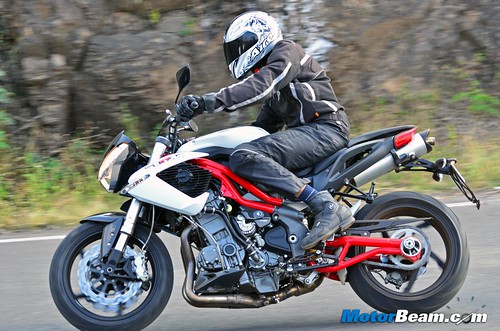 What does let the TNT 899 stay planted through corners is the fantastic trestle and aluminium sub-frame along with super grippy and wide Michelin Pilot Sport tyres. The wide handlebar isn’t slow at all but neither is it super quick but there is good amount of room to move around when you want to dive into a corner. The bike features wave discs and braking performance is good, the initial bite being plenty but the rears could do with better calibration as the rear wheel does tend to lock when you stomp hard on the brake lever. ABS should be offered with the Benelli TNT 899, it’s much needed for the kind of performance it belts out. Vibrations are very much in control thanks to the rubber mounted pegs and the engine using a counter-balancer, so riding for long isn’t tiring but if you ride fast, the heavy windblast is sure to tire you out. 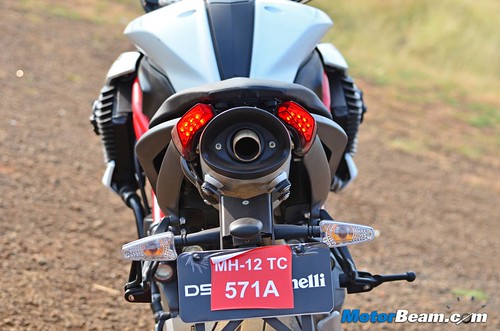 What an exhaust placement? Sounds terrific too but only once you whizz past 4000 RPM

Verdict – The Benelli TNT 899 goes and breaks the conventional mould of how a bike should be made. It isn’t just another bike, it has a strong character of its own which is undeniably what will lure buyers towards the Chinese owned Italian brand. With the famous Kawasaki Z800 being a CBU, DSK is getting all Benellis to India via the CKD route, thereby giving customers more bang for their buck. With its mad rush acceleration, ‘good-to-be-bad’ looks, top drawer hardware and excellent composure, the Benelli TNT 899 is a machine which is now accessible to those who want a crazy fun street-fighter from Italy.

The Benelli TNT 899 isn’t a please all machine but it has a charming personality which is bound to make you sit up and take notice. Right from fierce acceleration to eye grabbing design attention, this Italian sure is a worthy pick in the middle-weight street-fighter segment. 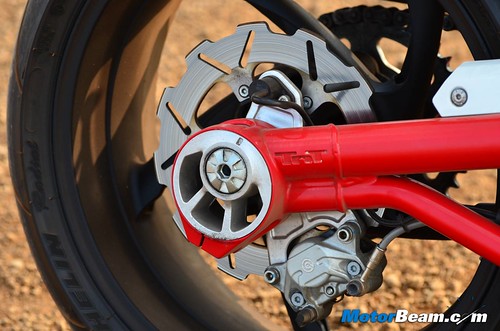 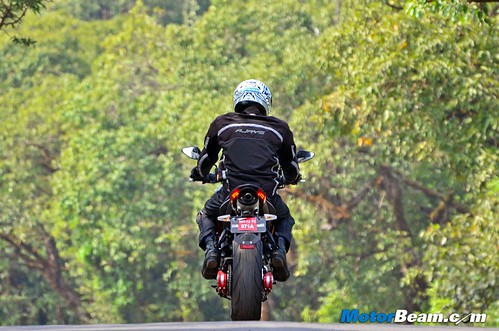