Honda entered the Indian market in 1998 with the first generation City and it was a runaway success. The City got a mild facelift after a couple of years and it continued to lead in its segment. Honda then gave the vehicle a completely new shape in 2003 and many called it the Honda City Dolphin. Some liked it while some didn’t. After that the Honda City ZX came which was an improved version of the ‘Dolphin; City. While it kept setting the sales charts on fire, Honda again launched an all new City in 2008 and people loved it for the futuristic looks. It sold well and got a minor update in 2011 but the new Hyundai Verna displaced it from the top of the charts. Now Honda has showcased the fourth generation City and we have great expectations from it too.

Both the Honda City as well the fluidic Hyundai Verna have a very futuristic design. The 2014 City is derived from the previous City and hence the design philosophy looks quite similar to the previous model. The fluidic Verna was launched as a completely new generation vehicle and it is significantly different from the previous generation Verna which was pretty plane-jane. The City has an arrow-shot design and it is expected that new vehicles from Honda will feature a similar front. The Verna follows Hyundai’s “fluidic” philosophy and the front resembles the i10, i20, Elantra and Sonata.

Now moving to the interiors, the previous generation City had decent space but the design of the dashboard missed the futuristic appeal of the exteriors. Many hated the City just for the interiors alone and now it seems Honda has finally heard our plight. The new City comes with a redesigned dashboard and a new centre console which features entertainment options as well as AC controls. The Verna on the other hand already comes with very funky interiors and blue lighting. It is a well known fact that many Indians buy cars just for the looks alone so here it is a no-brainer why the Verna sells so much. Space is pretty decent enough for 5 passengers but the City trumps the Verna in terms of interior room.

Coming to the equipment levels, the Honda City in its previous form came only with essential goodies like power windows, power steering, a very basic music system which had only AUX and USB support and a manual AC. It was good on Honda’s part to provide airbags and ABS on all the variants. The City missed out on various gizmos that the Verna has, such as a CD player, automatic climate control, etc. Honda has finally decided to add a CD player to the new City and it will also feature a Bluetooth kit. We can even expect the top variant to come with an audio-visual system which was offered as optional in the AVN package of the previous City. The City missed out on rear parking sensors but Honda has added a rear camera in the new model.

What does it take to drive these machines? The previous City came with a 1.5-litre i-VTEC engine which is pretty rev-happy. Honda lost many customers since the City did not come with a diesel engine. The 2014 City comes with the same 1.5-litre petrol engine but with an extra 1 PS and a CVT automatic. Honda has also decided to plonk the 1.5-litre i-DTEC diesel engine from the Amaze under the City’s hood. On the other hand, the Hyundai Verna comes with four engine options – 1.4-litre petrol, 1.6-litre petrol, 1.4-litre diesel and 1.6-litre diesel. 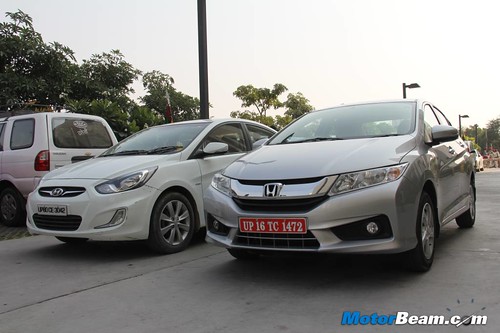 The 1.5-litre i-VTEC produces 119 PS of power and the 1.5-litre i-DTEC churns out 100 PS of power. The Verna’s 1.4-litre and 1.6-litre petrol engines give out 105 BHP and 121 BHP respectively whereas the 1.4-litre and 1.6-litre diesels give out 89 BHP and 126 BHP respectively. Honda provides automatic gearbox option on the top variants of the City and it also comes with paddle-shifters. Hyundai also provides an AT on both the 1.6-litre petrol and diesel engines of the Verna. 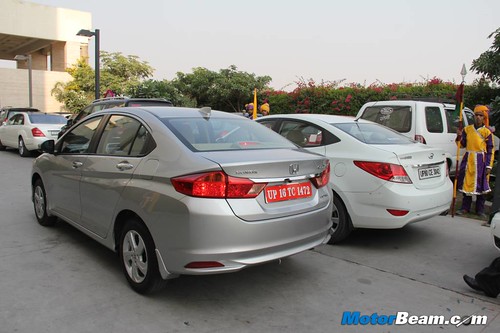 The Honda City has always been a best-seller in its segment but in the past year it started losing some its sales to customers who preferred the loaded Verna or the new entrants like the Volkswagen Vento or Skoda Rapid. The lack of a diesel engine option also turned the tides against the City and now Honda seems to have corrected all that. The 2014 Honda City will be launched in January 2014 and it is a much-awaited car for consumers. People have really high expectations from the City and if priced and specced correctly, it will regain its position as the market king.