They say if you don’t have ups and downs in your life then most probably you are dead. That has been the case with Mahindra Two-Wheelers. It all started with a bunch of scooters which came in the market and made a mediocre impact and vanished in thin air but that did not stop Mahindra to work harder. Tie-ups with Italian companies and a brand new R&D centre in Pune got them back on their feet. Result? A motorcycle like the Centuro which was an over night success because of the massive attention to detail along with features that actually work and were unheard of. A value for money quotient which was too high as well. Same thing is being repeated with the brand new scooter called Mahindra Gusto. A promising product which has the DNA of a motorcycle in every aspect so that it equals to a recipe of success. We find out by riding it on smooth straight roads of Jodhpur to tell you if the Gusto’s performance lives up to its name.

Motor Quest: Mahindra Two-Wheelers was founded in 2008 and forayed into the scooter segment with the Duro DZ, Flyte, Kine and then came the Rodeo RZ over the years. Now Mahindra starts fresh with this brand new platform and calls the scooter Gusto, keeping the tradition of having an “O” in the end. 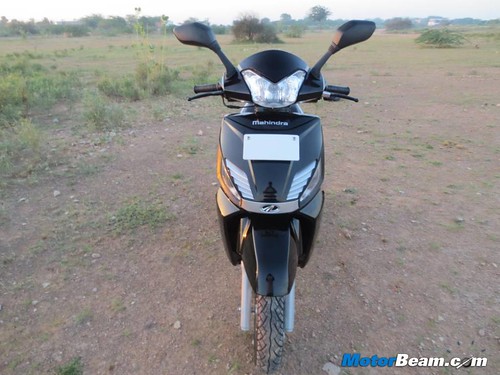 Styling – Pure, 100%, no doubt about it, no matter what you say, the styling is one of the most boxy designs ever seen in the Indian market before. The Hero Maestro does come close but not completely. Side panels and front mudguard depict exactly what we are talking about. The front panel also has been made as square as possible. Heck, even the grab rail at the rear is also squarish in design. Only the headlight part resembles to a scooter of the Mahindra family but its evolution of that old design. Grille on the front of the Mahindra Gusto gives it the car like theme and the turn indicator reminds you of the Duro in certain ways. The design of wheels are a photo copy of the Honda Aviator and end up giving it a bold and boxy look very well. The exhaust is also carried from the Duro but is devoid of chrome. 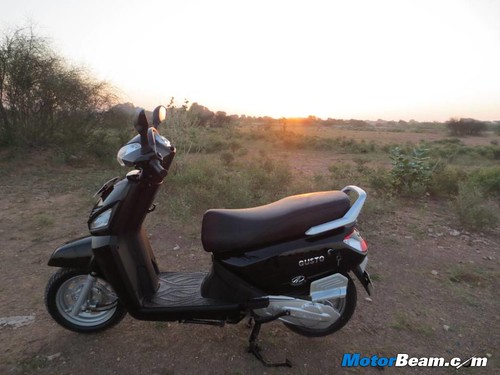 Mahindra badges on the side panels and at the front means that they are trying real hard to make people see this as a Mahindra scooter. The Mahindra Gusto badging on both panels is very loud and bold, it is very neatly finished. The rear has a humongous tail light that is sadly devoid of LEDs. Meanwhile, front headlight LED pilot lamps are derived from the Centuro. The Mahindra badging at the rear yet again is there to mark its presence loud and clear. Fit-finish is of the highest order but plastics are hard and shiny which translates to very cheap plastics being used all around. 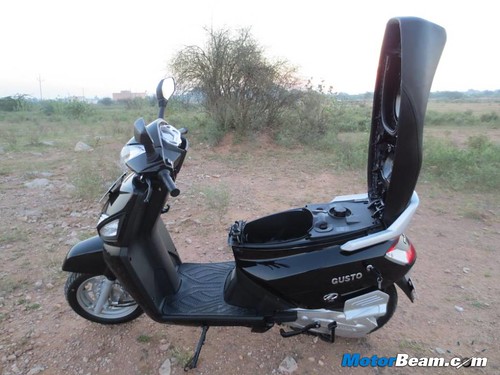 Seat opens the other way and stays there without any support, it’s pure magic!

Practicality – The seating position is upright on the Gusto with an extremely wide and comfortable seat. For the first time, the seat is an adjustable unit which can be lowered or raised by a humongous 40 mm with the most easy mechanism created and patented by Mahindra for this new scooter. Mahindra also says that there will be no ergonomic issues despite different seat heights as the position of the handlebar has been done in a universal way. Mirror stalks are quite huge and give a good view of what’s behind, in fact class leading view for any size of rider. Aluminium grab rail is there for the pillion to hold on to. Front kick idea directly comes from the TVS Jupiter and it works well. The key hole because of the flip key is placed in a horizontal way. As we told you, attention to detail in the Gusto is like pizza with extra cheese! 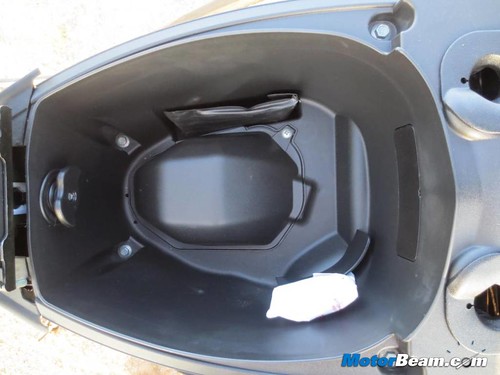 The only problem is that the storage capacity under the seat is very less when it comes to comparison with other scooters and the Gusto can only hold a half face helmet or else very little stuff when compared to other scooters in same segment. The seat opens the other way round and the moment you flip it upward, it will stay there due to the clever and patented mechanism achieved by the engineers at Mahindra. Under-seat storage should be around 13-14 litres but there is a practical bin just below the instrument cluster and one can use the hook below the seat and the other one at the front. Flip key has been provided like the Centuro and has the same guide lamps and find me light with sound and LED torch built into it. There will be two variants. VX is the top variant which gets VRLA 6A battery and adjustable seat height while the DX gets the 4A VRLA battery and fixed 770 mm seat height. 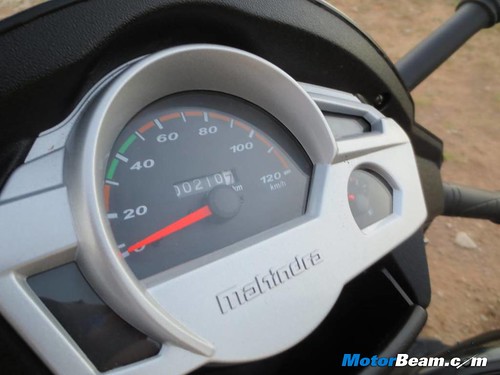 Instrument Cluster and Switchgear – The cluster is big in size but is a very vanilla unit to start with. The plastic silver cladding on top makes it look tacky. The font and colors used are good but not great. Solitary turn indicators have a separate housing and so does the high beam as both of them are on either side while the fuel gauge falls below the turn indicator screen. Switchgear is the traditional unit seen on most scooter, it looks and feels good. Turn indicators have small marking unseen on any scooter to make it slightly different. 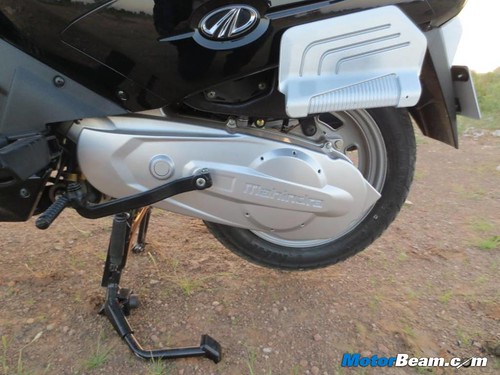 Performance – Powering the Mahindra Gusto is a 109cc engine which ends up producing 8 HP of power at 7500 RPM and 9 Nm of torque at 5500 RPM. Engine is a terrifically refined unit with NVH levels being very low. The motor is an all aluminium unit with high inertia magneto and high energy coil being used to reduce the load on the powerplant. The mill ends up reducing friction. Offset crankshaft is being used to reduce friction too. Roller rocker arms above the valves are also designed and made with materials to reduce friction to the maximum. Most of the things we recently saw in the upgraded HET model of the Honda Activa are seen here. Throttle response is linear and very well calibrated. 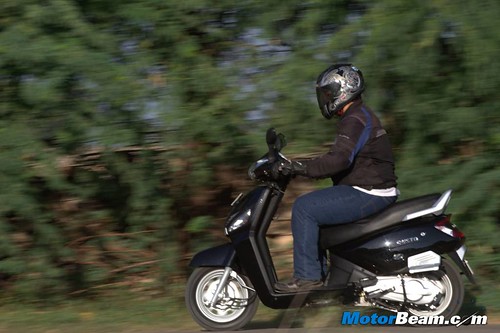 The engine is very calm, refined and powerful but the kerb weight this scooter carries is too high

The engine has been tuned to deliver all its power in the low and mid-end of the power band which makes city riding a breeze but as soon as you hit the top speed of 85 km/hr like any other scooter, you are at the end of the power band. The Mahindra Gusto could be more brisk and faster if it was not carrying a whopping 15 kgs more over its intensely tough competition. Yes, the kerb weight is 120 kgs which will end up hampering fuel efficiency for sure when compared to rivals. Despite Mahindra shows in its charts that power and torque curve is the same which means ride-ability is the same but not the performance. Performance is adequate and is on par with competition but numbers will tell us what is the true distance because the Gusto is going to stay behind every single competitor as most of them have lost weight or are lighter since day one. Overall, we can’t always have performance and commuter go hand in hand. There are a bunch of people in the market looking for heavier scooters to suit their body types and as always, Mahindra is looking forward to create a niche segment. 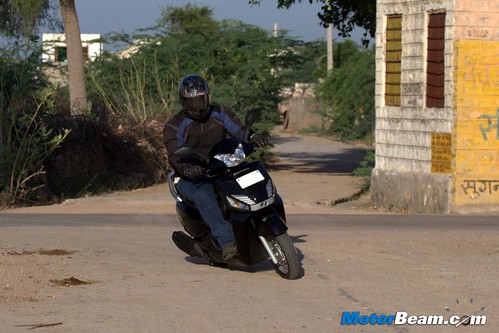 12-inch wheels, perfect damping and telescopic forks is a recipe for delicious dynamics

Riding Dynamics – When we first rode the Centuro which was Mahindra’s first fresh offering in the motorcycle category, we were spell bound by the ride and handling balance. Mahindra has taken that positive feedback as always and transfered it all to this scooter as well. Riding on 12-inch wheels and having telescopic forks at the front with a single monoshock at the rear and good damping, the Gusto has mastered the art of right balance between ride and handling. Ride quality is on the stiffer side but not in anyway does it feel harsh or manage to unsettle you. Rake out nature at the front means high speed direction changes are good and all that extra kerb weight makes the Gusto feel rock solid on straight highways. The Gusto ends up taking sweepers with authority and poise like any other dynamically sorted out scooter in the industry. 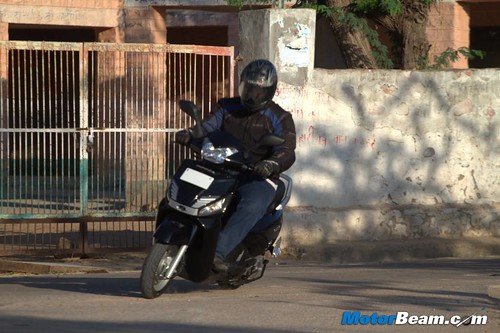 Cornering abilities are spectacular as well because despite the extra weight onboard, engineers at Mahindra have damped the suspension very well. Turn-in is good and chassis is stiff enough to perform daily duties. Obviously we could not push it to the limits as finding twisties in the state of Rajasthan was as hard as finding water in a desert. We did the highway cow test which means standing on the brakes real hard and the scooter did not lose its line and stopped quite quickly. Both front and rear drum brakes offer good bite and are powerful enough for the job. Tyres are good but not that great or perhaps they were brand new and needed run-in to become better which usually is the case with all tyres. 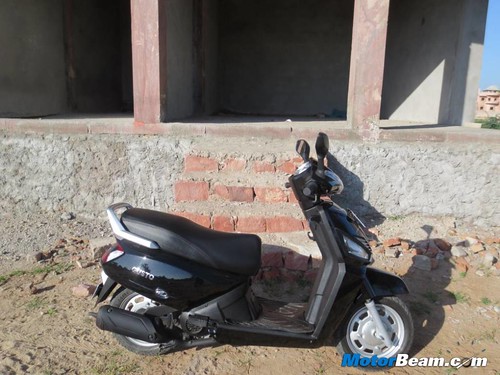 Verdict – The Gusto is the latest offering from Mahindra as it is a brand new platform for the world and more scooters are on their way. The Rodeo and Duro will continue to stay but they are based on an old platform and out of the box methodology is the reason why this new scooter is here. The Gusto then, with its massive attention to detail, lots of best in class goodies and essentials onboard is offering too much bang for your money. Mahindra says their touch points has increased by three times and still the work is going on as this is a non-stop process even for companies which are there in every alley of every city. Reliability is not a huge issue in 2014 and we think the company has a heritage of making robust and reliable products and that is why their entry in the two wheeler space is showing them all the glitter they need. The Gusto has the guts to finally stand against the tough competition in the entry-level 110cc segment.

The Mahindra Gusto may not look very appealing but it has a place in the market. Value for money quotient is outstanding. A scooter which serves purpose for everybody in the family is rarely seen without a compromise. With the Gusto, Mahindra has taken a quantum leap ahead and its core strength lies in the small details that it has mastered carefully. 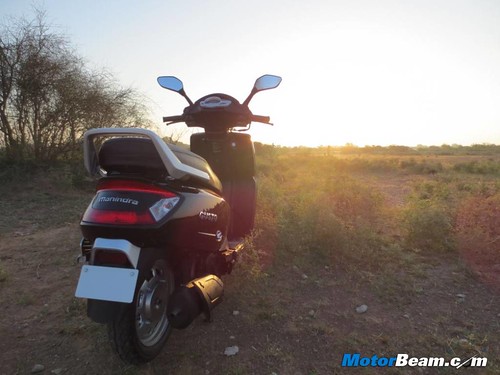 After endless testing, the dividends will pay off as the Gusto is on par with competition 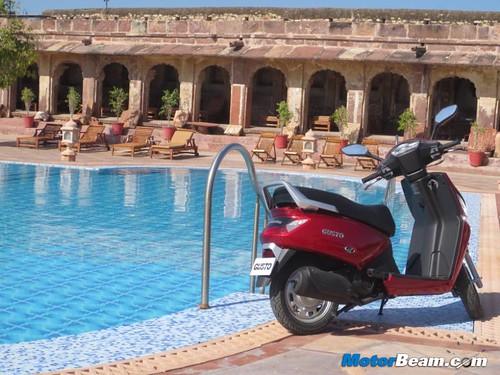 Mahindra To Launch 125cc Scooter Based On Gusto