The 2014 S-Class is the segment benchmark, the diesel engine adds more practicality.

The schedule is fixed, every once a decade a car arrives which re-writes the rules of the automobile industry and shapes the next few years to come. We are talking about the S-Class, the flagship Benz stands for everything Mercedes is, and more. After making us go head over heels with the S500, the German auto giant has now brought in a diesel version of what is without doubt the best car in the world. Badged as the S350 CDI, the diesel powered S-Class is cheaper and more frugal too, thereby making it a more practical alternative to the V8 S-Class. We bask in pure opulence as we get behind this stately Benz.

The S350 CDI is identical to the S500 in exterior appearance, the alloy wheels and badging are biggest changes

Exteriors – The sheer size of the Mercedes S-Class gives it massive presence. During our road test, we did notice many people (including the youth) turn around and stare at this car. The S-Class has presence and there are only two things which differentiate the S350 from the S500. The diesel model gets smaller 18-inch multi-spoke wheels instead of the more dramatic 19-inch ones seen on the V8 powered version. The other change is at the rear, where the lower side of the bumper is slightly different, it doesn’t get exposed exhaust mufflers like the S500 which has trapezoidal units, instead the exhaust tips are hidden under the bumper. The design of the S-Class is well executed, it looks stately yet with a touch of maturity which spells class like no other car in the segment. Right from the large front grille, smooth flowing lines and chrome touches, the S-Class carries huge appeal. Not to forget, the vehicle doesn’t have a single light bulb, it uses all LEDs and those really transform the illumination from the head and tail lights of the car. 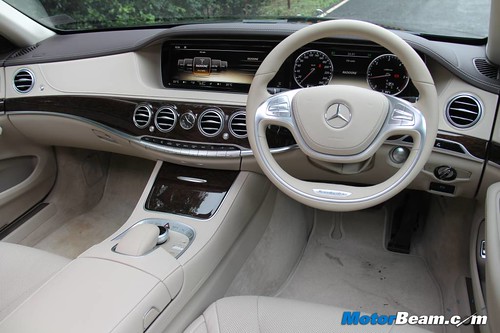 Interiors – The S350 CDI is a lower spec car than the S500 and thus some equipment has been omitted. Although you still get a thoroughly loaded car with little to complain, the S-Class diesel lacks a 3D surround system (but still uses Burmester sans a few speakers), 360-degree camera (you only get a rearview camera), Night Vision System and power operated boot. The cabin is identical to the S500 but there is wood missing on the 2-spoke steering wheel and you don’t get individual rear seats (so no tables for you), instead you get a bench with a large centre arm rest, there is no fridge either. The only shocking omission is the lack of memory seats for the driver, a feature even the entry-level A-Class comes with as standard. 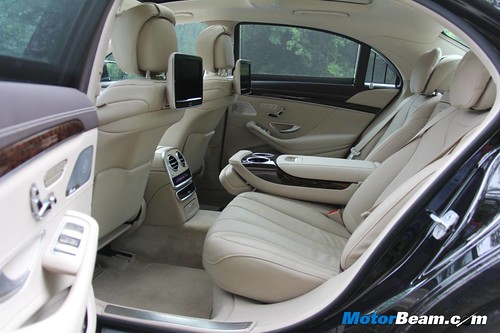 With a bench type rear seat you can now seat a third passenger but the transmission hump is quite massive thereby making this car best for two adults at the rear. You still get a plethora of adjustments for the seat along with heating, cooling and massaging functions. Sitting at the rear, you have complete control as you can operate the rear panoramic roof, rear windshield window shades and the likes from a touch of a button on the door. You also get LCD screens for rear seat passengers and should you feel the need to stretch, a press of a button moves the front seat forward to liberate an additional 77 mm of legroom, opening up an electrically extending footrest.

Spacecraft levels of attention to detail will impress you day-in and day-out; car has no light bulbs, only uses LEDs

The cabin of the S-Class is pure indulgence. Quality levels are surreal and everything fits in so perfectly, it sometimes feels unreal. The attention to detail on every front is worth an applaud, the way Mercedes has brought in retro feel with a modern touch is something unseen even in this class of vehicles. The steering is a 2-spoke unit which reminds you of Mercs from the 1950s (so retro) while there is no traditional fuel gauge, you get a meter which reduces by 5% every time, showing for example 55% fuel left (so modern). There is plenty of space on each seat and the seats are extremely comfortable, we still can’t get over the pillow on the headrest, which is softer than the softest we have ever encountered. The interiors of the S-Class are just mindbogglingly good, they set a new benchmark in the segment. 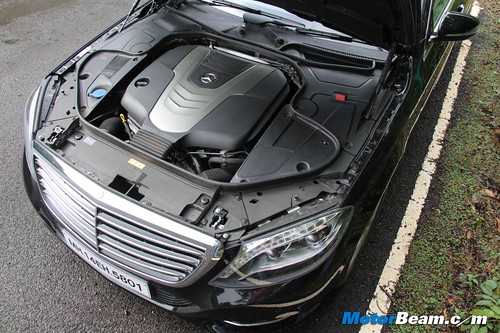 Performance – Did you know, the S-Class comes with a host of powertrain options globally including V12 engines (on the S600 and S65 AMG). Joining the V8 S500 is the 6-cylinder S350 CDI. Diesel being the more popular choice in this segment means the S diesel will be more in demand than the petrol model. The 3.0-litre V6 motor needs little introduction, it already powers quite a few Mercedes cars including the ML and GL in India. Generating 258 HP of power at 3600 RPM and 620 Nm of torque between 1600-2400 RPM, the S-Class diesel has plenty of grunt with power delivery being butter smooth, sans any turbo lag. 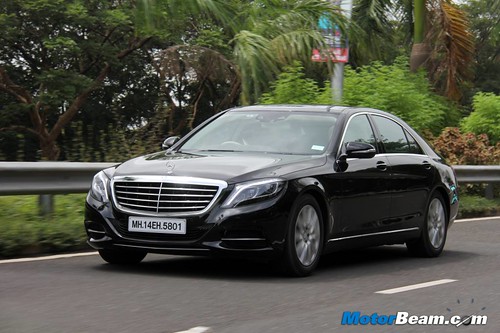 Performance as you expect from the best car in the world, is effortless, you don’t have to stand on the big pedal to gather good pace, even part throttle inputs work very well to move this uber luxury sedan. While you don’t get a kick in your pants feel when the turbo kicks in, there is a long surge which seems almost endless, giving the vehicle linear performance. The mid-range is very strong and that helps the S350 CDI reach high speeds without a hiccup. You can choose between E and S mode, the latter improving engine response and reducing cog swapping time. Still the 7-speed automatic gearbox isn’t quick enough although it shines when it comes to smoothness of shifts. 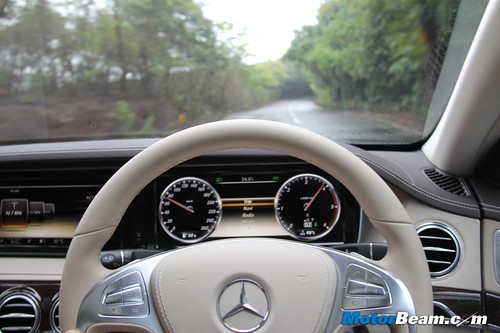 Performance is super smooth yet packs a serious tight-fisted punch, NVH is fantastic

100 km/hr comes up in third gear, taking 6.8 seconds. While cruising, the tachometer ticks in at 1400 RPM in top gear and the top speed is limited to 250 km/hr. Redline comes in early at 4200 RPM but in spite of the impressive performance and 2.1 tonnes plus weight, the S-Class diesel managed to return close to 10 km/l. This diesel engine works so well in the S-Class, that you really don’t miss the S500, although the latter has more power and is quicker too. For most owners, who will be seated at the back, there is no way to make out this is a diesel engine, performance is almost petrol like.

Driving Dynamics – The S-Class is a car which is high on comfort, as so evident by the 7-star luxury offered by the cabin. The same needs to translate on the move and it does, even better than the S500. While we were thoroughly impressed by the ride quality of the petrol powered S-Class, the diesel model rides even better, courtesy of the 50 profile, 18-inch tyres which have a higher sidewall compared to the 19-inchers found on the S500. The Airmatic suspension works brilliantly to isolate uneven tarmac and what ever road we encountered, the S-Class simply glided over it like a battle tank. It’s the feeling of waft which makes it move like a hovercraft, even on our half broken roads. The real deep potholes are the ones which affect the car’s composure else the S-Class takes everything in its stride with utmost confidence. 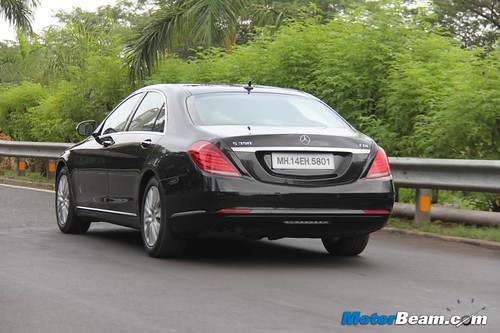 Ride quality is just amazing, the S-Class glides on most road surfaces like a tank

The Airmatic suspension can be put in either Comfort or Sport, in the latter, the suspension stiffens up a bit and the steering gets added weight. Light at low speeds, the steering is well weighed at high speeds and is terrifically responsive too, of course not like a sportscar but extremely good for a car of this size. In fact, the feedback is so good, you can push the S-Class around the corners with reasonable confidence (it does feel a bit floaty), size being no hinderance to spirited driving of this close to 5.3-metre long saloon. The flagship Benz remains thoroughly glued to the road at high speeds and the insulation is so good, there is just the hum from the engine with little wind noise, fantastically low NVH levels indeed. A button raises the car by 20 mm to prevent touching the underbelly on bad roads and there is an automatic drop by 20 mm once you touch a speed of 120 km/hr. The brakes work like anchors to stop the car from high speeds and the pedal feel is so positive and accurate that you can brake late without passengers coming to know. 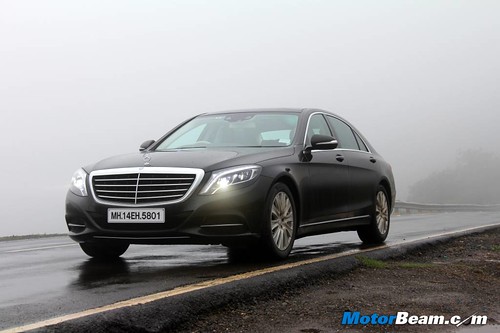 Verdict – When Mercedes launched the S500 in India, the initial 125 units got sold in no time. With the S350 CDI, the company can expect an even better response. While the diesel powered S-Class is down on some equipment, it is significantly cheaper than the petrol powered V8 model while also being more practical with its fantastic diesel engine, resulting in an excellent fuel economy and a longer range on every tank. The performance from the S-Class diesel is effortless and the motor has the punch to do insane speeds in a jiffy. Factor in the designer grade interiors, stupendously good ride quality, insane levels of attention and you know this Mercedes will continue to remain the top of its class, as always.

Diesel power in the Mercedes S-Class brings a whole load of practicality to the vehicle. With impressive engineering all around, the S-Class continues to be the car for those who either want the best or nothing. 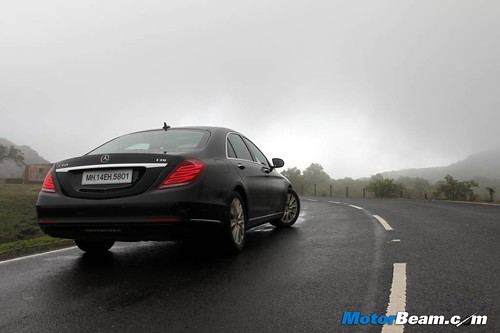 Even more value than the S500, the S350 S-Class is money well spent for the rich