Audi’s A6 has been around for quite a while now and being a capable machine, has done well in the luxury saloon space. However, the A6 was beginning to show its age with time. To keep things interesting, Audi recently launched the mid-life facelift of the A6 sedan and are calling it the Audi A6 Matrix as it is sporting the German automaker’s revolutionary Matrix headlamps. How good is the new Audi A6 Matrix? We take it out for a spin in the city of Udaipur to find out.

Motor Quest: The Audi A6 (C7) was unveiled in 2011 for the global market and has been a successful model for the Ingolstadt based manufacturer. Audi unveiled the mid-life facelift of the A6 at the 2014 Paris Motor Show which includes changes in the styling, engine upgrades, transmission and the latest MMI interface. Audi has only recently launched this A6 facelift in India and are calling it the Audi A6 Matrix. 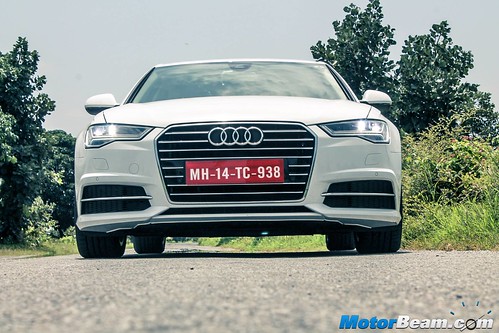 Exteriors – The new Audi A6 Matrix gets the latest 3D single frame front grille (third car to get it in India after the TT and the Q3 facelift) along with revised front and rear bumpers. The dimensions are the same except a few millimeters added on account of the new bumpers. The bumpers now incorporate more character lines which enhances the sporty stance of the car. The 10-spoke alloy wheels give the side profile an aggressive stance. The highlight of the updated A6 are the Matrix headlamps which are being offered as standard as of now. The Matrix headlamps incorporate 19 LEDs and a sensor which scans external lighting and adapts the lightning accordingly. 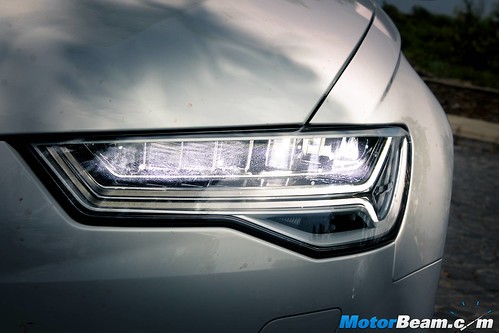 The Matrix LED headlamps are the first electronically controlled (software based) glare free high-beam system in the world and is able to see vehicles in front and adjust its high-beam light in such a way that it illuminates the road without blinding other drivers. These headlamps were first seen in the flagship A8 sedan in India. The rear gets all new LED tail lamps and the integrated rear spoiler is also redesigned. The dual exhaust pipes are now trapezoidal in shape and accentuate the sportiness of the car. The bootlid gets a strip of chrome too. Overall, with the new bumpers and the Matrix headlamps, the A6 Matrix appears to be longer than it actually is, which is a good thing as the profile is reminiscent of Audi’s flagship sedan, the A8. 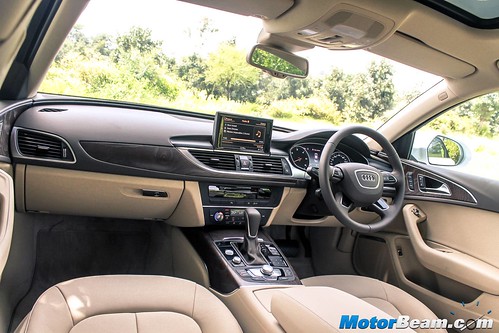 Interiors – There are many changes in the cabin as well. While the layout remains the same, there are brown wooden inlays on the dashboard and aluminium finish on the air vents. The seat upholstery is now of Milano leather. The gear lever is also redesigned to look more sleek. Audi has given the latest version of MMI with a 8-inch retractable screen (previously 7-inch) which has a faster Tegra-3 processor with voice command and handwriting recognition. The jukebox can store upto 10 GB of songs. Navigation is quite accurate as Audi has loaded the latest map data in the system. 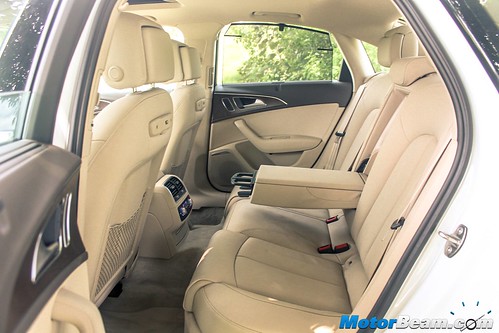 Cooling things in the cabin is a 4-zone air conditioning system with vents on the B-pillar as well for faster and efficient cooling. Audi has opted for a 14-speaker, 5.1 channel BOSE surround sound system which is truly eargasmic, in the literal sense. As part of Audi’s top down strategy, few features of the A8 have made it to the A6. For the cabin, Audi has offered the front co-passenger seat adjustment from the rear seat to adjust legroom. The rear seat passengers can take over the MMI with the help of the rear seat remote. Other features include rear parking camera, 8 airbags and the regular tid bits which are standard in this segment. 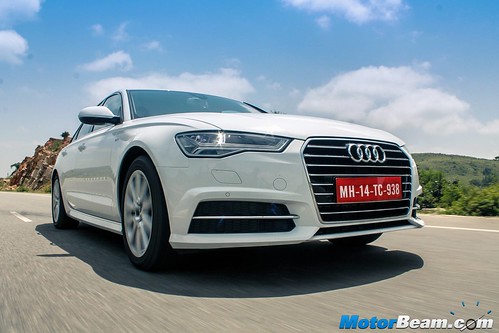 The 2.0-litre diesel motor pulls cleanly and at no point feels underpowered

Performance – Audi has gone for a very smart strategy with the A6 Matrix. Instead of offering more engine options, it is offering a fully loaded car powered by the time tested 2.0-litre TDI oilburner. Previously, the A6 was available with two diesel options (2.0-litre and 3.0-litre) and a petrol 2.0-litre TFSI motor. In all likelihood, we expect Audi to launch the petrol A6 soon enough. Back to the 2.0-litre TDI motor, on paper it may not feel powerful enough for a car of this size but in reality, it proved to be quite capable. Audi has tweaked the engine to increase power by 7% and inspite of the power boost, fuel efficiency has also increased by 5%. Churning 190 HP between 3800-4200 RPM and a twisting force of 400 NM from as low as 1750 to 3000 RPM, this motor propels the A6 to 100 km/hr in 8.5 seconds with a top speed of 226 km/hr. 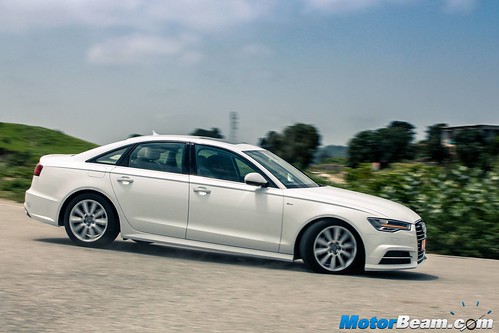 One of the most significant improvement in performance comes from the fact that Audi has ditched the CVT aka Multi-Tronic transmission for a 7-speed dual clutch S-Tronic gearbox. This 7-speed transmission gives you the best of both worlds. Drive with a light foot and the A6 will comfortably do 100 km/hr in top gear, ambling around the 1200 RPM mark thereby offering good fuel economy. Floor the pedal to the metal and the S-tronic transmission responds well to throttle inputs. At no point did we find the motor lacking power and the car reaches speeds in excess of 160 km/hr in quick time. Paddle shifts are provided for those who believe in having a little extra fun. The A6 Matrix comes with ‘Audi Drive Select’ which offers four modes namely Comfort, Dynamic, Auto and Individual, which work by altering the suspension, steering and engine/gearbox settings. 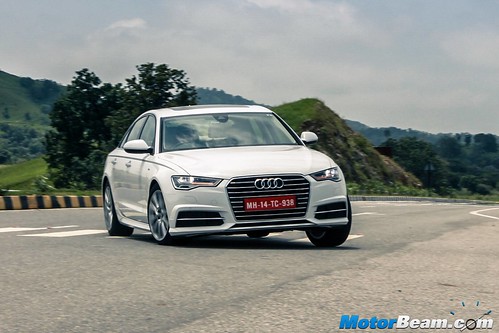 Driving Dynamics – The Audi A6 Matrix rides pretty well. While we mostly drove on smooth tarmac, the few odd kilometers on bad and broken roads were easily dealt with thanks to the Adaptive Air Suspension. The handling is decent and the steering feels quite light at low speeds, it weighs up as the speeds pick up. The steering becomes more weighted in the dynamic mode and the A6 scores well in tackling the twisties but steering feedback could have been better. Power is channeled through the front wheels and due to this front wheel drive layout, it tends to understeer on hard cornering, but this won’t be a deal breaker as most people buying this car won’t be going flat out most of the times. The handling, though good, is still not in the same league as the competitors from Munich who offer a much more involving driving experience due to a rear wheel drive orientation and a much more precise steering. Braking performance is pretty good and the tyres offer sufficient levels of grip. 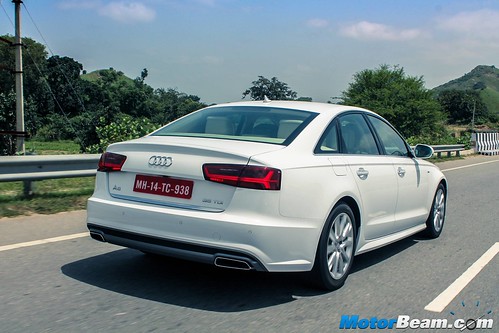 Verdict – Audi has injected a dose of freshness in the A6 with this update. It looks sportier than before and is loaded with features including the state of the art Matrix headlamps. The 2.0-litre diesel motor offers good punch and is now even more fuel efficient. What really makes the A6 a very attractive buy is the entire package is very tempting as many features of the A8 have been included and all this comes at a competitive price of Rs. 49.50 Lakhs (ex-showroom) making the Audi A6 Matrix terrific product for the money.

The 2015 Audi A6 Matrix looks great, is packed with bells and whistles and all this for a very competitive price brings a lot of value to the table making this Audi a tough nut to crack in the luxury saloon segment. 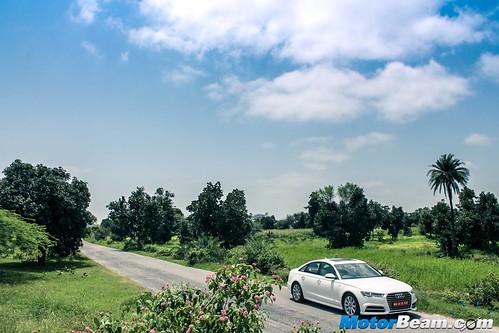 * Sporty looks courtesy of the new bumpers and 3D grille
* Matrix headlamps are standard
* Loaded with features, few of them from the A8
* New 7-speed S-tronic transmission is quick and offered a good blend of performance and efficiency