The Audi Q3 is a practical luxury SUV with more equipment, it is now very attractive too

Just recently we put the three big German compact luxury SUVs in a shootout and the Audi Q3 emerged on top. Now the Ingolstadt based automaker has brought the facelifted model to India, a case of the segment leader getting even better. The Audi Q3 is a very important car for the four-ringed brand because not only is it among the affordable of luxury cars, it also sells in excellent numbers for the company. Audi overtook BMW to become numero uno in luxury car sales in India a couple of years back and the Q3 can be credited with leading the charge in sales. So what all is new in the updated Q3?

Motor Quest: Audi launched the Q3 globally in 2011 while its India launch happened in 2012 with a diesel engine. The company launched the petrol and Q3 S models in 2013 while the Q3 Dynamic was launched last year. Audi unveiled the facelifted model in November 2014. The vehicle is based on the PQ35 platform. 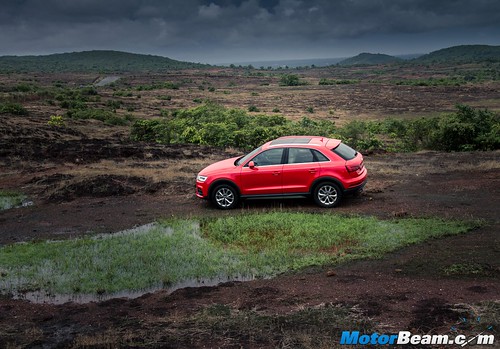 The Q3 has always had a bold stance, the changes to the front & rear make it look fresh

Exteriors – When Audi launched the Q3, its only rival was the BMW X1 and in front of the Bavarian vehicle, the baby Q looked more attractive. However, recently the GLA came along and although the Q3 is the most masculine car in its class, the Mercedes’ fresher looks made it the king in the design department. Now with the facelift, Audi has induced some fresh appeal in the Q3 which makes it stand out in this German dominated segment. While the overall body remains the same, the changes are the most striking at the front and rear while the side remains unaltered, save for the new Y design alloy wheels whose 10-spokes look quite cool. 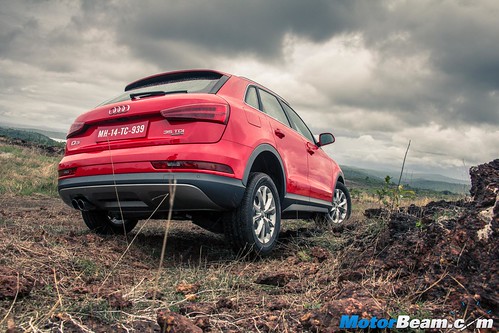 The Audi Q3 not only looks fresher now, it is also more imposing

A quick glance at the front and the first thing one will notice is the new grille which is extended to the headlight with the silver finish. There are revisions to the bumper as well as the hexagonal grille while the headlight looks similar to the pre-facelift model but has got slimmer and features a new pattern for the daytime running lights while the internals now use full LEDs on the top trims. This new face of the Q3 is in-line with the new Audi SUV design language which is also seen on the second generation Q7. At the rear, the car gets a different pattern for the tail lights and a new bumper while the most striking update are the dynamic turn signals (for the rear only) which were only seen on the A8 and R8 till now. 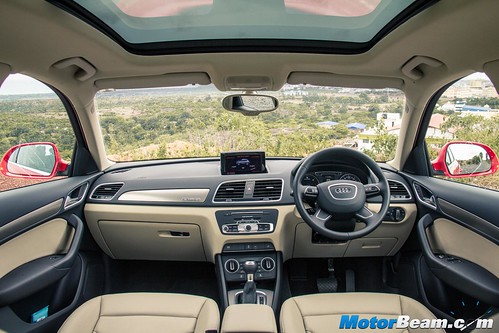 Interiors – The facelifted Audi Q3 retains the same layout for the dashboard and the cabin is very similar to the model it replaces. There are subtle changes though like the instrument cluster gets a colour screen in between the dials that displays crucial information like phone call and navigation. The MMI system has also been updated and in the Technology trim, features a 20 GB hard drive storage, two SD card slots and satellite navigation. Audi has also added a mobile phone holder with a charger in the front centre arm rest, that also gets a booster which uses the car’s antenna to amplify signal, thereby saving your smartphone’s crucial battery from draining fast. 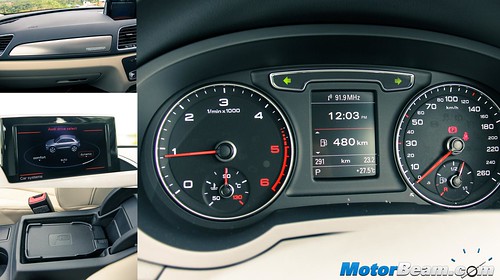 The Audi Q3 now gets a host of new equipment

Audi has replaced the wood inserts on the dashboard, door and centre console with 3D aluminium inlays that looks sporty while the car now uses chrome accents for that premium feel in the cabin. One can opt between all black interiors or the airy beige and black option. The Audi Q3 now gets a rear-view camera (with dynamic guidelines) for all trims and there is also a large panoramic sunroof. Space inside the cabin is good enough to seat four people as the transmission hump is big enough to hinder a third person at the rear while headroom is good and boot space is class leading. The Q3 comes with rear AC vents which although isn’t a big feature, isn’t offered by its rivals. 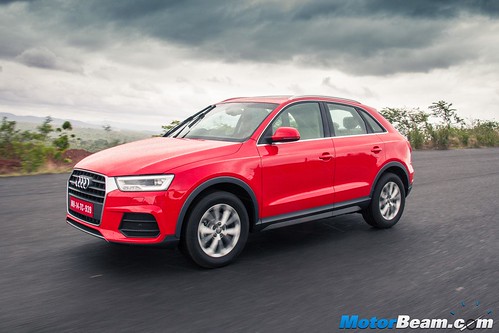 Performance – Audi is offering the Q3 facelift with a diesel engine option only, the petrol version will be launched later, just like how the pre-facelift model was launched. The 2.0-litre TDI diesel mill gets no changes whatsoever and produces the same 177 BHP of peak power at 4200 RPM while peak torque of 380 Nm is available between 1750-2500 RPM. The oil burner offers good performance throughout as it dolls out punchy performance and revs quickly to its under 5000 RPM redline. 0-100 km/hr takes 8.2 seconds while top speed is rated at 212 km/hr. 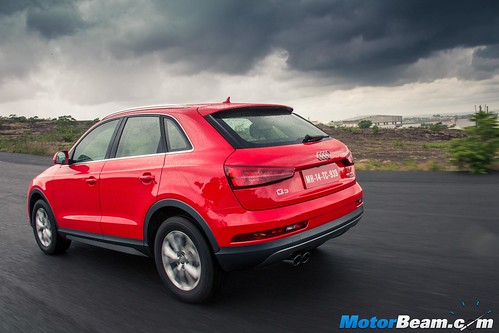 The Audi Q3’s TDI mill is very smooth and NVH levels are low, save for the sound it emits post 3000 RPM when you go hard on the big pedal. The engine shows no signs of stress even when you drive at high revs and keeps pulling with enthusiasm to high speeds. The vehicle comes with Audi’s Drive Select (Comfort, Sport, Auto modes) wherein it alters the engine, gearbox and the steering. There is a bit more pep in Sport mode while the Q3 now gets steering mounted paddles too which is a great addition. The 7-speed S tronic automatic gearbox is quick with shifts and is very responsive to throttle inputs, downshifting in a jiffy when you need a quick burst of power. The compact SUV is quite frugal and will return upwards of 12 km/l. 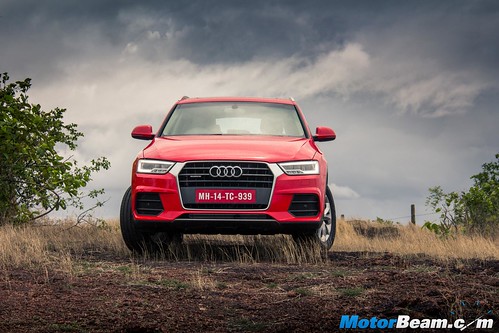 Driving Dynamics – Audi hasn’t altered the suspension of the Q3 and it rides and handles the same as before, there is nothing to complain about though. That’s because the baby Q has always carried a good balance of ride and handling, taking bad roads in its stride with confidence while also being sharp through corners. The Q3 is the only car which can carry the SUV tag with pride in its segment as it comes with the quattro all-wheel drive system, making it quite capable off-road. We took our test model through some off-road sections and it didn’t bat an eyelid. The steering is light at low speeds which is a boon in the city while at high speeds, the feedback could have been better. Braking performance is excellent and the Pirelli tyres offer very good grip. 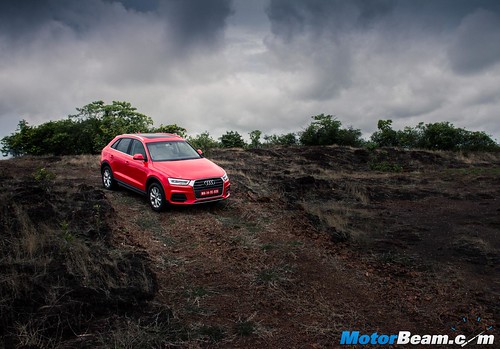 Verdict – The Audi Q3 has had it easy since the time it was launched in India because it was quick to beat the BMW X1 in the sales chart while it held off fresh competition from its Stuttgart rival with relative ease. With all the updates made to the car, although none are to the engine or suspension, the Q3 continues to be the best luxury compact SUV in the market today. Audi is starting off with the diesel model as that’s where majority of the sales come from but soon the petrol version will arrive and even the manual gearbox equipped Q3 S (which is our pick of the Q3 range). Now Audi only needs to bring the Q3 RS to tackle the GLA 45 AMG, we are waiting!

The 2015 Audi Q3 now gets more appeal along with a host of very useful features (even on lower trims), making it an even better buying proposition than ever before. 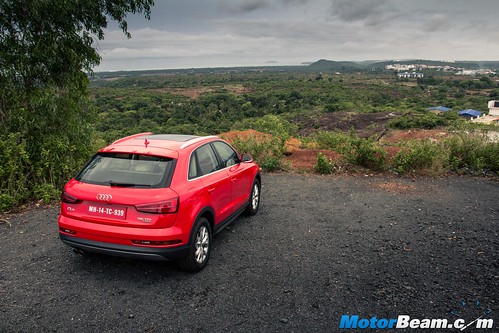 Easily the pick of its class, the Audi Q3 is now even more desirable

* Looks fresher now and packs in more visual appeal, gets 3 new colours too
* Added equipment makes the Q3 on par with its rivals as far as features go
* In spite of no changes on the mechanical front, it still boasts of good performance and dynamics

News highlights of the day include Mahindra, Eicher, Ola and Delhi Police. Mahindra Scorpio - The popular Indian SUV has been updated with BS6   END_OF_DOCUMENT_TOKEN_TO_BE_REPLACED

Toyota is preparing to launch limited edition Fortuner. We just saw the first spy pictures of the facelifted Toyota Fortuner that gets sharp   END_OF_DOCUMENT_TOKEN_TO_BE_REPLACED