The GO+ is not really a 7-seater, it’s more like a 5-seater hatchback with a big boot

Nissan revived the Datsun brand after a huge time period and launched the GO entry-level hatchback in India. Unfortunately, the GO did not sell as well as anticipated in the market and recently the vehicle received a lot of flak for performing terribly in the NCAP crash test. Datsun has also developed an MPV based on the GO and with the recent climb in sales that MPVs are witnessing, Datsun seems to be quite optimistic that it will be able to gain decent sales with the GO+. But, the Datsun GO+ competes with some products that have the backing of manufacturers with a huge service network. So how does the GO+ perform? Does it have what it takes to capture the market? A nice drive through Rishikesh, Uttarakhand allows us to test the GO+ and its capabilities.

Motor Quest: The Datsun brand was owned by Nissan Motor Company from 1958 to 1986. After that, the brand was discontinued but Nissan revived it in 2013 to develop and launch low-cost vehicles for developing markets. The GO hatchback has been pitted against the Maruti Suzuki Alto and Hyundai Eon while the GO+ MPV will fight it out with the Maruti Ertiga and Honda Mobilio. Datsun’s service network comes nowhere close to its Japanese and Korean rivals. 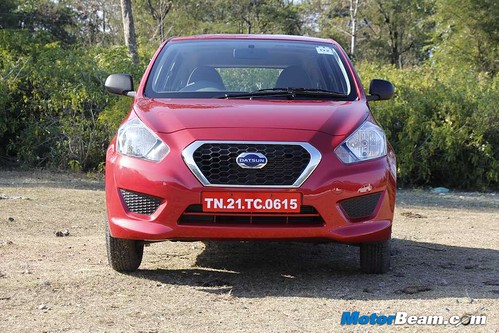 Exteriors – The GO+ shares its front fascia with the GO hatchback. Every design element is carried over. Frankly, there is nothing offending about the design and the styling is very neutral. It is neither sporty nor dynamic but it should please most of its prospective buyers. The front bumper gets a swooping down effect from the sides. The medium-sized hexagonal honeycomb grille looks good while the headlights carry a decent design. The side profile of the MPV looks boring but Datsun designers have added a fair number of lines and creases which break the monotony to some extent. 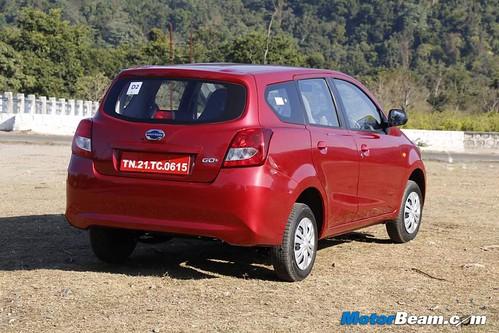 Tail lights have been shared with the GO, the design is very old-school

The GO+ doesn’t have that boxy look like the Nissan Evalia and Chevrolet Enjoy which is a good thing. The vehicle’s body gains some mass near the waistline below the C-pillar which makes the rear glass look smaller. The tail lights and rear bumper are bulged out and hence the GO+ looks very bulky at the rear. The tail lights are the same ones used on the GO hatchback and from the rear-quarters, the MPV looks a tad bit old-schoolish. The vehicle gets puny 13-inch tyres on steel rims. In size, the GO+ looks quite smaller than its immediate rivals. The headlights have a good throw and are decently powerful. The rear gets only one reverse light on the LHS while the RHS unit has a dummy light. The build quality is nothing to speak about and the doors close with a not-so-reassuring light thunk and same is the case with the boot lid. 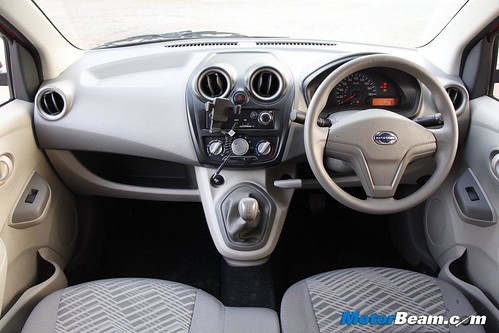 Interiors – Step inside the cabin and you see that Datsun has borrowed most of the components from the GO hatchback. The dashboard has a very simplistic design which does look boring, since we are used to seeing quirkier designs now. The door pads are simple with no fabric or leather and they house only the power window controls and a bottle holder. The door handles on the inside are similar to the ones used on the Micra and Sunny, without the chrome. The AC vents are circular and each one of them can be completely shut. The top variant T gets front two power windows and a manual central locking system. The driver’s door doesn’t have a button to control the passenger side window though. There is no proper audio system and all you get is a dock to connect your phone through an AUX wire with two speakers at the front. The speakers produce just average sound quality with hardly any bass or treble. 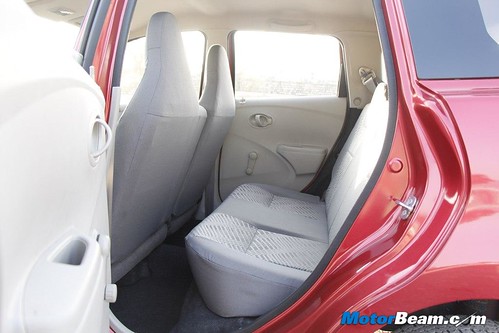 The dashboard has greige (grey+beige) plastics and the overall layout is quite okay. There is no proper glove box and all you get is an open space below the dashboard on the left side. The steering wheel is a 3-spoke unit without any controls on it and the instrument console is also very easy to read. It houses a digital tachometer and a display that shows average and instantaneous fuel efficiency and also distance-to-empty. Below the steering wheel there is a small empty space given to store nitty-gitties like coins, mobile phone, wallet, etc. The gear lever is mounted close to the dashboard and hence there is some amount of space freed up in between. The handbrake lever is very unconventional and it has a rod that needs to be pulled up to engage the brake. The front passenger seat is extended towards the driver’s seat and there is no gap between them, one can keep some stuff there. 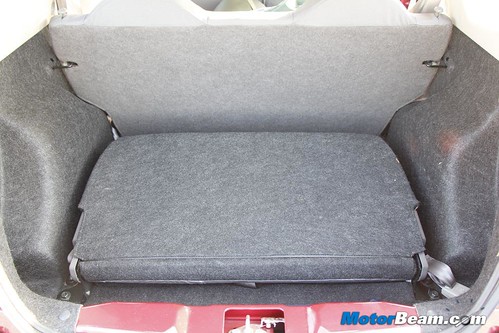 The seats are slightly stiff but they don’t make passengers uncomfortable. The driver’s seat is void of height adjustment. The middle row seat is good enough for two adults and you could just squeeze in a kid in the middle. Legroom could have been better and tall people might face some issues with their knees rubbing against the front seat-back. The third row is best reserved for kids since the seat is placed directly on the floor and there is very little leg space so unless you want to make some new enemies, adults should be best avoided from being made to sit there. Cost-cutting is very much evident and only the middle row gets grab handles on the ceiling. With all the rows in their place, boot space is almost negligible but fold the third row and you get a whole lot of space which would be good for short outstation trips. 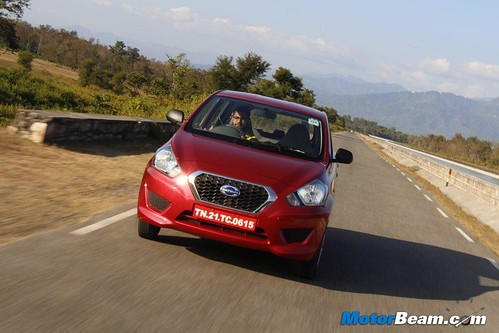 The GO+ is powered by the same engine as the GO, it is very peppy

Performance – The Datsun GO+ MPV is powered by a 1.2-litre petrol engine. This is a 3-cylinder unit and it also powers the GO and Nissan Micra (in a higher state of tune). It churns out 68 PS of power at 5000 RPM and 104 Nm of torque at 4000 RPM. The engine is mated to a 5-speed manual gearbox. Datsun will not be offering any diesel engine with this MPV. The petrol engine is very peppy and power is always available on tap. The low-end and mid-range offer good power while delivery is decent at speeds above the ton too. At the top-end of the RPM spectrum we found the engine to be a bit strained but it still performed well. With three bulky people on board and a boot full of luggage, we did not face issues in gaining speed or overtaking other vehicles on the highway. 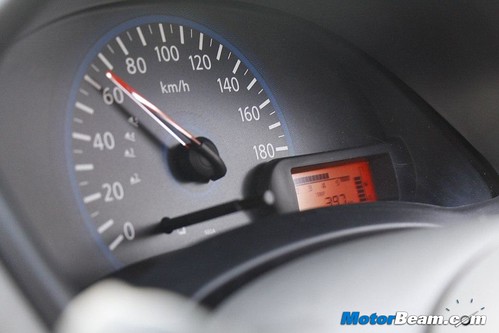 Power delivery is good while fuel economy is also decent

The 1.2-litre 3-cylinder engine has a lot of punch and makes for a fun-to-drive proposition

Since this is a 3-cylinder unit, the engine does make some noise and it becomes fairly audible inside the cabin once the RPM begins to rise. With all four windows closed, the GO+ offers decent NVH levels and the cabin is moderately silent but some noise from the outside world does creep in. The gear shift is not-so-smooth, say like the Honda Brio, but it slots well and there is no notchy feeling. Torque delivery is also good and linear and it contributed majorly while climbing ghats. 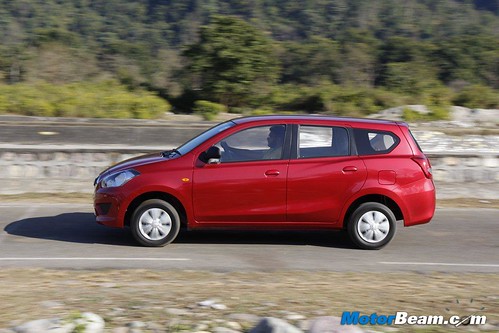 The GO+ isn’t the most silent car, the engine does make some noise

The Datsun GO+ has an ARAI-tested fuel efficiency of 20.6 km/l but in our day-to-day driving conditions, the MPV managed to give around 13 km/l in the city and around 17 km/l on the highway. Talking about braking, the GO+ does not get ABS but we did encounter a couple of emergency braking situations and the vehicle handled all that without much drama. Even under regular driving conditions, the brakes work well with their good bite and don’t feel faded at all.

Driving Dynamics – The Datsun GO+ has a really good ride quality and the suspension managed to absorb most bumps very well. The driver as well as the passengers remained quite comfortable on most bad patches of road and the vehicle too remained very composed. At speeds above the ton, the GO+ remains fairly stable but while taking corners or driving a bit quickly through twisties, we did encounter a fair amount of body-roll. In all of these situations, the vehicle did not lose form and never did we feel that it will go out of control. 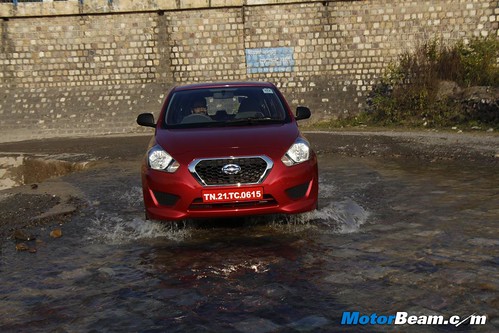 Ride quality is simply amazing on the GO+, it handles our bad roads with ease

The MPV gets a speed-sensitive electric power steering. The steering is very light and it is devoid of feedback. The lightness comes in useful while driving on crowded roads or while parking and at higher speeds it does weigh up a bit. Handling is quite crisp and this is actually a fun-to-drive car, just let down by a poor choice of tyres. The puny 13-inch Strada tyres offer just average grip and they disappoint big time. It is clear that Nissan is using them just to save costs. An upgrade to 14-inch wheels will really add to the vehicle’s handling characteristics. 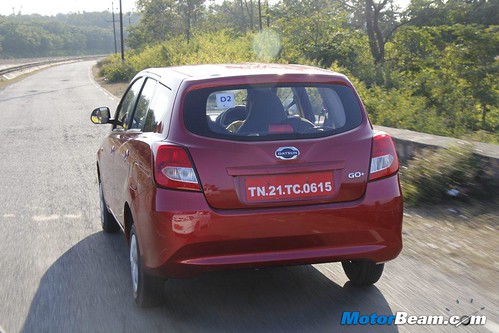 Safety and After Sales Service – The Datsun GO+ is sparsely equipped and on the safety front it gets neither ABS nor airbags as standard although a driver side airbag is an option on the T variant. This is quite disappointing and since we already know how the GO fared in the recent NCAP tests, we expect the GO+ to be no better. This reason itself could be a big deal-breaker for many. It is a sure shot fact that Nissan-Datsun’s after sales service holds no candle against Maruti and Honda. This is one of the most significant reasons why most people don’t consider Nissan-Datsun vehicles even before taking a test drive. Since we don’t see many vehicles from these stables on our roads, long-term ownership costs and reliability issues are also unknown but the company is working hard to address the issue of sales and service reach. 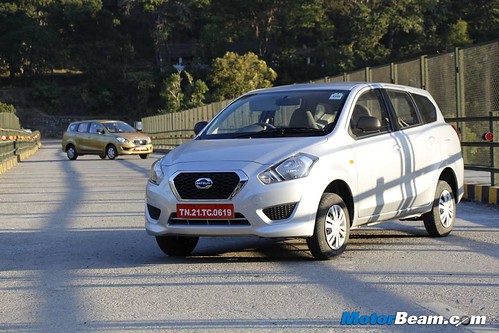 Verdict – The Datsun GO+ is a compact vehicle with a good engine, great ride and handling and decent fuel economy. It lacks on the safety front and in case of an unfortunate breakdown, it could be hard to locate a Nissan-Datsun service centre. But it is going to be a really cheap 7-seater and could be a great choice for someone who actually wants all those seats and is on a tight budget. For others, who really do not require a 7-seater, there are better options like the Maruti Wagon R and Hyundai i10 available in the market or the Maruti Ertiga and Honda Mobilio if buyers can stretch their budgets. Still, as far as value for money goes, this Datsun is hard to beat.

The Datsun GO+ serves a good purpose but a company like Nissan, with its huge experience, should really consider offering safety features at least as an option since this vehicle is aimed at ferrying the complete family. 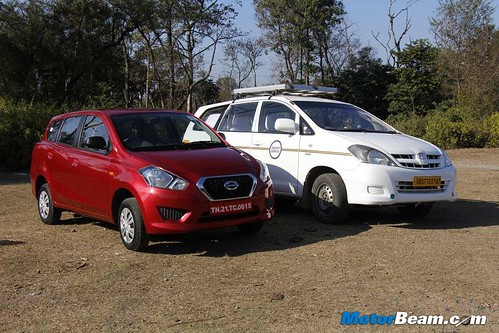 Cheapest and the costliest MPVs posing side by side 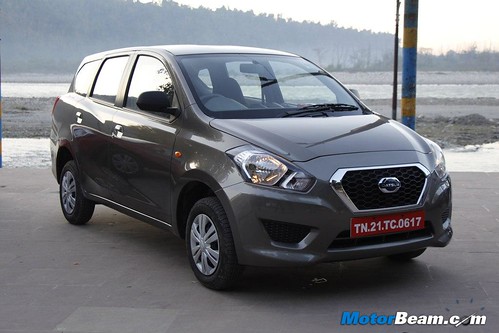 Some clever marketing might just make the Datsun GO+ a success