Action in the 150cc motorcycle segment continues to grow with more products being launched every now and then. Last year we saw the launch of the Yamaha FZ V2 and Suzuki Gixxer while Hero updated its Xtreme and plans to launch the Xtreme Sports soon. Bajaj Auto, the leader in the 150cc category will launch the new Pulsar 150 (based on the 200 NS) so why should Honda stay behind? The company has launched its fourth 150cc offering, the CB Unicorn 160 which carries the name of Honda’s first motorcycle in India forward. Unlike its rivals who are going outright sporty, Honda continues to remain commuter oriented but does the new Unicorn make for a strong proposition? 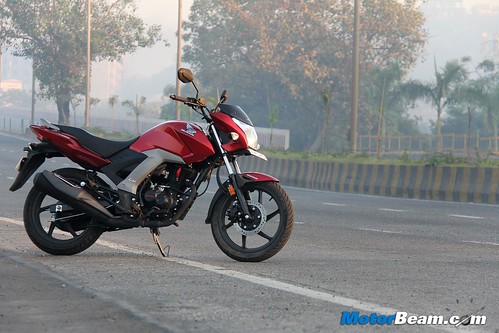 Styling – When we first saw the pictures of the Honda CB Unicorn 160, we didn’t like it much but in person, the bike does look good. Although not something which will turn heads, the design is still quite appealing although still very conservative. There is some inspiration from the CX-01 on the headlight and tank but the 150cc Unicorn’s design elements can be traced. The front is compact while the plastic tank scoops are stuck tight. There is a good flow of panels on the side (black and silver cladding) while the black treatment of the short and stubby exhaust looks good. 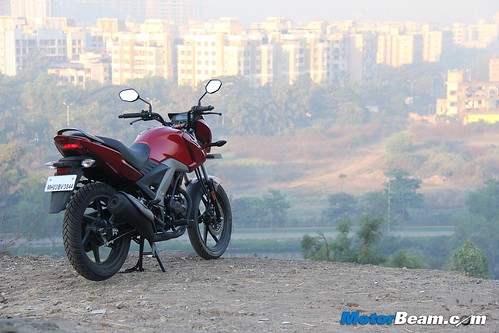 Things get a bit interesting at the rear as the Honda CB Unicorn 160 gets one of the best saree guards we have come across on any mass market bike. The motorcycle gets an H shaped LED tail light which looks quite unique. Other small details include reflectors on the front forks (the Trigger gets them on the rear mudguard), black windscreen and some edgy panels. However the one piece grab rail, long single-piece seat and full chain case hint at the Unicorn 160’s commuter intentions. The bike rides on 17-inch wheels (the regular Unicorn rides on 18-inch wheels) and the tyres are smaller in width when compared to competition. 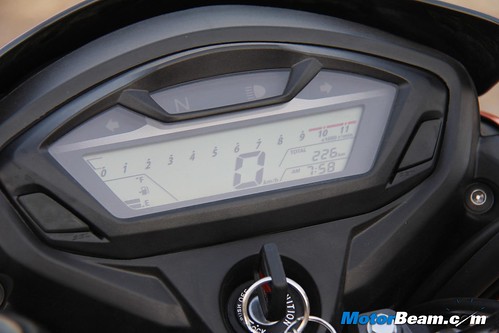 Instrument Cluster and Switchgear – The backlit console of the Unicorn 160 isn’t similar to the Trigger’s. In isolation they do appear the same but in reality that’s far from the truth. Compared to the Trigger, the Unicorn’s instrument cluster has a different layout and also a slightly smaller display. The all digital unit displays fuel meter, odometer, twin trip meters, clock, tachometer and speedometer. The tell tale lights are placed on the top and the buttons to operate the meters is very hard. Ironically, Honda has marked the top-end on the meter itself, (not in it) as turning off the bike still shows the red line between 9700 to 11,300 RPM. Switchgear quality continues to be a let down and there is no engine kill switch, yet again! 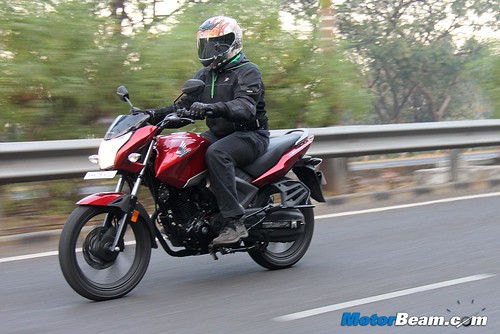 Ergonomics – The engine and seating position of the Honda CB Unicorn 160 aren’t in sync because you get very commuter ergonomics on this motorcycle. One sits upright and the footpeg position is very forward set, mirrors offering good view of what’s behind. The seats are hard and they do tire your derriere even after an hour long ride. There is plenty of space for a pillion as the seat is very long but the cushioning isn’t top notch. The Unicorn’s seat height is such that the bike is comfortable for both short and tall riders alike. Due to the way the seat is designed, there is very little tank grip on offer for the rider. 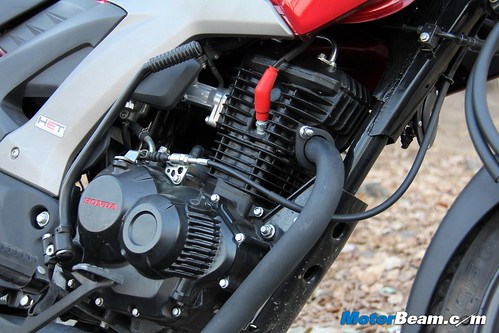 Performance – The talking point of the Honda Unicorn 160 is of course the engine, after all it’s a new unit. The motor uses the same bore as the 149cc mill seen on the old Unicorn and Trigger while there is an increase in stroke to come to the higher displacement. There are changes to the cylinder which gets a new sleeve design and the single-pot mill also gets new bearings. The crankcase has also been redesigned and one can see small fins on the outside, near where the Honda name is engraved in red on the engine. Crucially though, Honda has added a counter balancer which further irons out vibes. 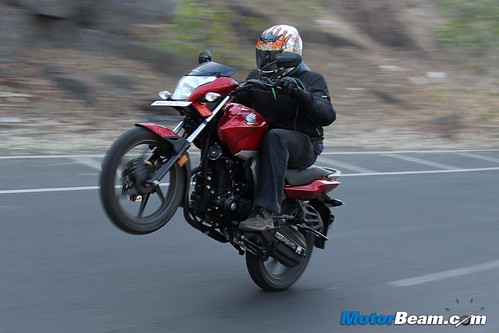 The motor is very tractable and in-gear acceleration is excellent

The Unicorn 160 gives a similar feel from the engine that the CBR150R gives, it packs a punch

If you have ridden the old Unicorn or any other Honda bike for that matter, you will appreciate the smoothness of the motor and the Unicorn 160 carries that trait. It starts with butter smoothness and idles with the same calm. The exhaust system has been redesigned and emits a throaty sound when you rev it hard. The changes to the engine help in better heat management but crucially though, the 162.7cc air-cooled motor produces 14.7 PS of power and 14.51 Nm of torque. The increase in output figures (mainly torque) makes the Unicorn 160 quite urgent when it comes to throttle response. Accelerate hard and it moves with urgency, doing 0-60 km/hr in 4.82 seconds while 100 km/hr is achieved in 16.15 seconds. Top speed claimed by Honda is 106 km/hr while we managed to do 122 km/hr on a long stretch of road, the true speed being 114 km/hr. 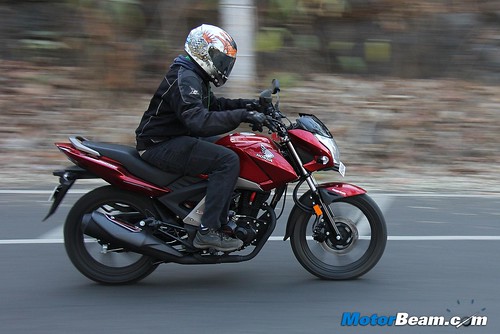 This Honda does 51 km/hr in first gear itself! A very tall geared bike

Honda has given the CB Unicorn very tall gearing, first takes you to 51 km/hr, second to 85 km/hr while third takes you past 100 km/hr (to 105 km/hr). In comparison, the KTM Duke 390 which is an extremely tall geared bike does 56 km/hr in first, 82 km/hr in second and 105 km/hr in third, yes, that’s how tall geared the Unicorn 160 is! Fourth and fifth is short as the bike refuses to go past 111 km/hr in fourth, getting stuck at 9000 RPM while fifth will see 122 km/hr but only if you lie down flat on the tank for better aerodynamics. Progress does slow post 100 km/hr, taking quite a lot of time to reach its top speed. The meter is marked till 11,300 RPM and that’s where the redline is. 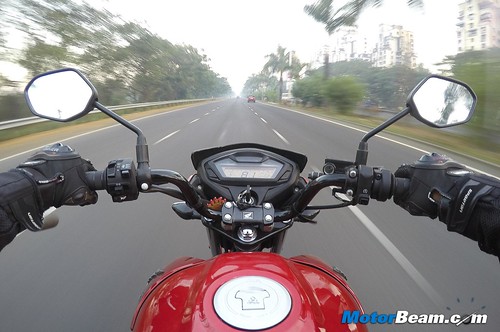 Honda has done a fantastic job with the engine as it has very good low and mid-end punch. One can ride at 30 km/hr in fifth gear and yet pull quickly to higher speeds without any resistance from the powerplant. There are some vibes on the pegs (post 4000 RPM) but none on the handlebar and there is no knocking from the engine when you ride at low speeds in higher gears. 100 km/hr in top gear results in 7000 RPM on the tachometer while cruising at 70 km/hr in the same gear will show 5000 RPM (old Unicorn gets to 5000 RPM in 5th at 60 km/hr itself). Power delivery is linear but peak action lies between 3000 to 8000 RPM. The heel-and-toe shift lever offers smooth shifts and the clutch is light but not at home when you try clutchless shifts. Honda claims a mileage of 62 km/l but one should expect anything between 48-53 km/l from this HET equipped machine. 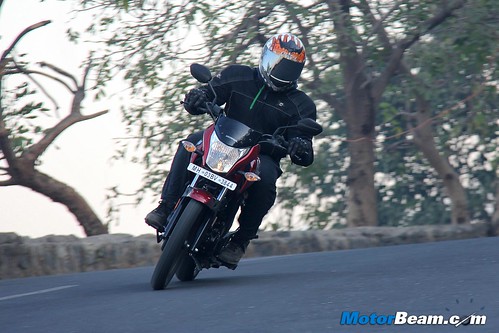 Eager to corner, the chassis is well set-up but the riding position robs confidence

Riding Dynamics – The Unicorn 160 is a mix of Unicorn and Trigger which is apparent in certain places. While it carries the Unicorn name and conservative styling, it gets the tank size and weight of the Trigger. When it comes to suspension though, it’s soft at the front and stiff at the rear so the front-end is light while bad roads do give the rear a thud. What it results in, is a pliant ride quality on good and average roads but bad roads do unsettle the rider by transmitting too much to him. 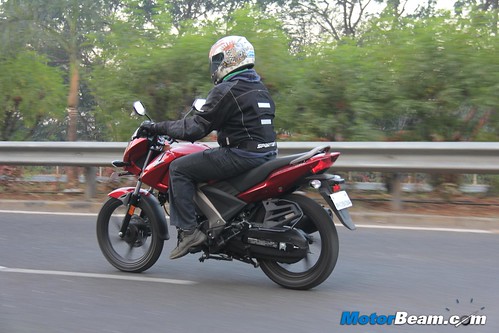 Ride quality is good but rear is stiffly sprung; CBS works like a charm

Handling is good and the handlebar is light and communicative enough for making city duties a breeze. The diamond frame chassis is very capable, enabling both stability at speed and eagerness to corner hard. What ruins the fun though is the riding position which simply doesn’t inspire you to ride hard around the twisties. The Honda CB Unicorn 160 is committed when cornering and the MRF Zapper-FQ tyres offer good grip too (the narrower rubber results in both better acceleration and economy), they are the same size as seen on the Trigger. Our tester came equipped with CBS which gives it good braking performance (Nissin callipers) and also added safety but there is no rear disc on offer, not even as an option! 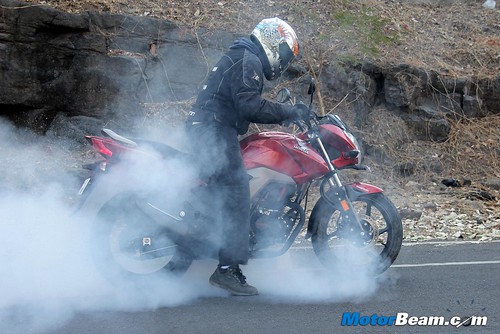 Burnout in second gear, not a problem for the Honda CB Unicorn 160

Verdict – The Honda CB Unicorn 160 is an excellent product and the engine is without doubt the jewel of the package. There are still some rough edges like the last century switchgear and the use of AC lighting. However the performance is simply excellent and we like the new Unicorn more than the CB Trigger which was among our favourites till the Suzuki Gixxer arrived. Honda has kept the Trigger on sale and that creates quite the confusion. The Unicorn 160 is more expensive than the Trigger but the top-end Trigger costs more because it gets a rear disc brake. The Unicorn 160 is the better bike and it’s not like the difference between the new Unicorn and Trigger is similar to the difference between an SZ and FZ or a Discover 150 and Pulsar 150. As a product, the Honda Unicorn 160 is fantastic but will the Unicorn name woo the youth as against middle aged men is yet to be seen.

Honda has created quite the confusion in the mind of prospective buyers with the CB Unicorn 160. It comes across as the more performance oriented bike compared to the CB Trigger yet costs lesser money, thereby questioning the need of having the Trigger on sale simultaneously. 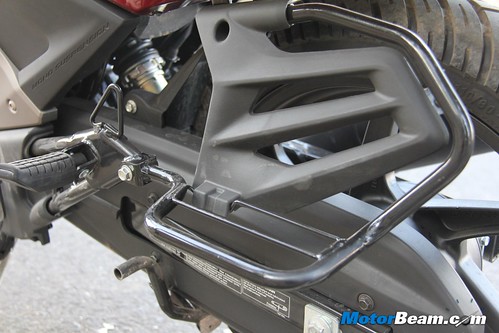 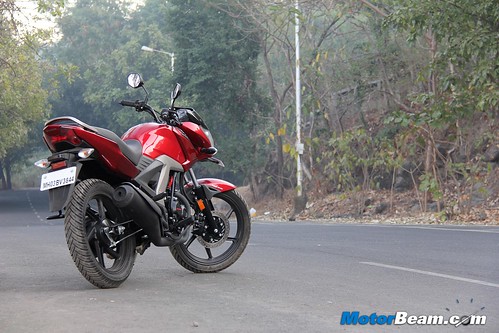 The CB Unicorn 160 makes for a stronger proposition than its sibling, the CB Trigger