Price: Not For Sale

Motorsports in India is slow yet steadily emerging. While cricket has got so much attention than any other sport being played in India, even if we total the interest in rest of the sports, it barely matches the interest solely in cricket. Nevertheless, motorsports in India has had a good, actually great leap in the past few years. The amount of interest, technology, safety with all the precautionary measures and the rules and the regulations have come to be the best yet. As we are talking about motorsports, last weekend Honda gives in a buzz and it’s time for the Honda One Make Championship Race – Round 2 and well I get a chance to be at the event. Wow! While not just cover the event via the media perspective but also get to ride a heavily modded race-spec Honda CBR250R on the track, well the weekend’s just become the best. 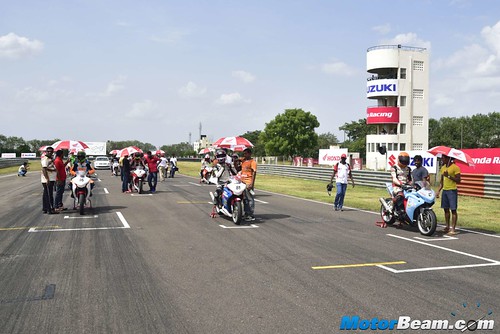 Very few CBR250R’s on the start line, few but the fastest

Day 1 – So the day comes and I fly off to Chennai for the same while the adrenaline rush has already flown through all the nerves and into the brain. Early morning I reach Chennai and the plan is to directly head to the track. The moment the taxi arrived at the Madras Motor Sports Club track, there’s already a lot of sound of various bikes guzzling, some being tuned up while some being just checked for any flaws. There was Honda Racing as the largest company after which came various others with some having their personal setup done for pit-stops in the pit-lane. The Honda pit-stop greeted with the guzzling loud CBRs in the shed. After a check on the schedule and that everyone was on time, the first day began will all the practice sessions. During the day, lots and lots of practice laps happened and by the end of the day, I got my riding gear and a brand new Honda CBR250R for the practice session. 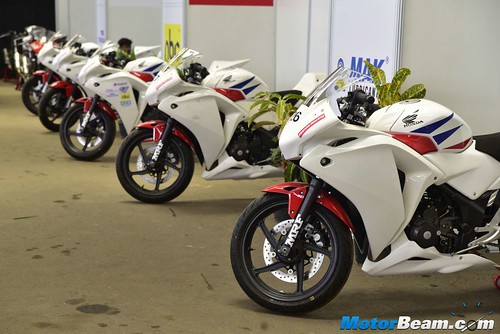 All geared up and the practice rounds start. But before going down on the track, it was necessary to know the bike well and this is the point which took some time off the practice laps. The bike was a brand new Honda CBR250R with a load of modifications. The list of mods goes as follows, the stock tyres by Continental were taken off and the bike had good new MRF rubber, specifically the REVZ C, 110/60/17 at the front and 150/60/17 at the rear. The footpegs were rearset, yes a bit more behind than the stock position. The bike literally had no electricals, not even a tail lamp. All the electricals just included the ECU and the instrument cluster. The bike lost all its weight with a one piece rear panel with a thin layer of rubber as a seat while the front had a scooped aerodynamic body design, same as the stock design. The shock absorbers weren’t stock either. A different set of shock absorbers locked at a stiffer ride quality which is best for track racing. 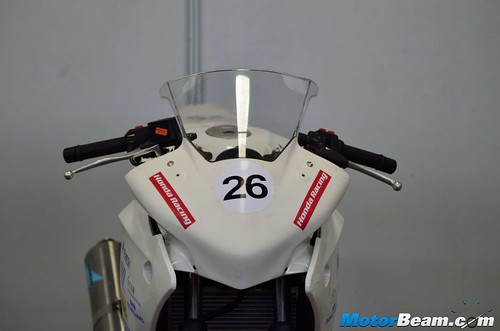 The bikes didn’t have a key start, the kill switch is a direct on-off switch. The engine ran on tuned ECU units which had two power modes while the horn button on the switchgear happened to be a quick shifter button. With that the bike used to up-shift without any loss of power. For the pits, the bikes had a cut-off switch which would limit the revs just below 5000 RPM so that no one runs over anyone in the pits. None of the bikes had ABS as it would just increase the amount of weight. Again talking about weight, the bikes didn’t carry any radiator fan either, just a reduction in electricals and again weight. There’s more weight reduction as the bike doesn’t carry any extra nuts and bolts but had all the necessary ones properly fitted and checked. None of the stands what-so-ever, the bikes stood on the paddock stands in the pits. All this resulted in improved performance, a faster revving engine and higher speeds coming in quicker. The handling became better too with better front-end feel. 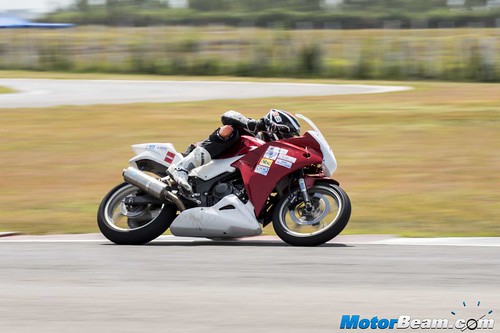 So finally some laps on the Honda CBR250R happen and the insanity of how people ride on the track is experienced. The one piece leather suit just dehydrated me a lot while the temperature on the track wasn’t soothing at all. Even though the tyres became hot quite quick, they did provide ample amount of grip. I could perform good few laps of the track as fast as I could, but there wasn’t a 100% input while riding as I was getting dehydrated very quick. Still maintaining a good speed in the corners, following the line, reaching the apex of the corner and then feeding in with throttle gradually but quick. Could do above 150 km/hr on the straights while corners at about 80-100 km/hr. My best lap timing was about 25 seconds slower than qualifying limit, but it was self-satisfactory considering the first time track experience. 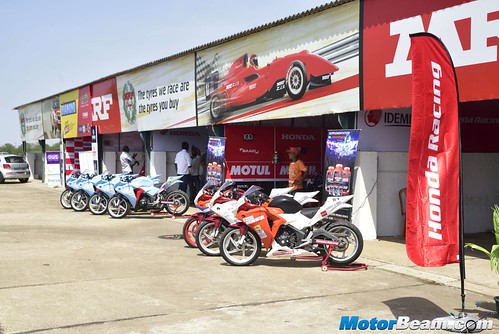 Honda’s pit-stop just next to TEN10 racing, the team that trains the riders at Honda

Day 2 – As the practice round itself was enough for me to get the idea of what racing is and as I couldn’t be fast enough to qualify, I couldn’t participate in the main race. The second day begins and the heat gets more insane! All the other groups and classes of races start as the qualifying is completed and the main race starts. The other groups of classes other than the CBR250R got the half loop of the track, while the CBR250Rs got the full loop that is the full track for the race. Honda is a company that is now bringing up the Asia Dream Cup in which the top riders from India could participate in the Asia Cup and represent India. The company does promote safety and it arranged some gymkhana sessions during break time and also some events for the visitors to keep everyone engaged. A very good strategy by Honda! Day 2 was the best day as there was the least time when the track was empty. 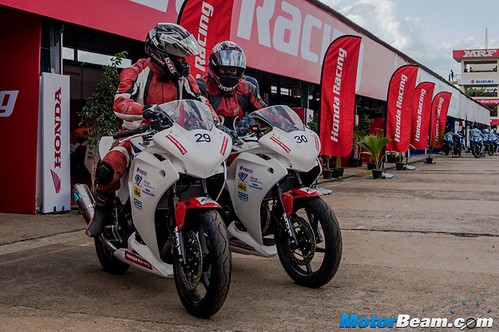 Day 3– The last day had all the final races of all the categories. This day there were good number of crashes, dangerous overtakes and the streamline passes at the straights. Racers were giving it all out to come first. The quickest launches from the start point had the best advantage as they rode it all out while the racers who were at the last could have a good experience of racing as winning wasn’t possible, but improvising on the riding for further races was possible. The three day event completed with the best of races and track experience while some tips and tricks from senior riders and trainers were the major takeaway. 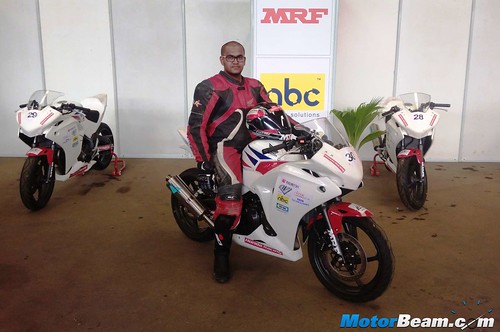 Insane heat and all leathers, probably not a great option while getting pictures clicked

Honda doesn’t limit itself to just racing but on the local grounds there are events like gymkhanas where the people get a chance to test their skill on the bike while Honda by itself promotes safety by providing a helmet and protective guards for each ride. There was also a ride event which was encountered and about 170 CBR250R owners rode all the way to the track promoting road safety in Chennai on the final day of the event. On the international level, Honda has its own championship known as the Honda Asia Dream Cup for which the top participants of their one make championship, represent their country in the Dream Cup. This is a great contribution to the motorsport world by Honda as it leverages the interest in India. And not to be left out, Federation of Motor Sports Club India (FMSCI) does a stupendous job of managing and keeping in control all the races as motorsports is dangerous.