Success, many crave but only some achieve. In the Indian automobile industry too, manufacturers are leaving no stone unturned to reach to achieve top honours. But then there are cars which take success a step further. The Honda City is one such car which has ruled the roost right from the word go and continues to do so even today. It’s not surprising that besides having entry-level models like the Brio and Amaze in its portfolio, the City continues to be the top seller for the Japanese manufacturer. Honda’s best selling City has been with us for a while now and we have ensured that odometer has been ticking frequently. From City duties to long highway runs, we have thrown literally everything at it and we find out how it fared in our gruelling long term test.

Before we begin, lets rewind a bit to last year, where we put the entire C-Segment together for the big daddy of all shootouts and the City trumped every other car in that segment, at that point in time. What really went for the City is that fact that it delivers a good balance of everything, precisely what the target customer wants. The City is neither the most powerful car in its class nor is it the quickest but striking a good balance amongst everything makes it come out on top. While the design is more evolutionary than a drastic change over its predecessor, it is still quite likable and then there are those City fans who just want one, come what may and Honda deserves full credit for having built that kind of fan following over the years. We have nothing to complain on the design front, it may be similar to the outgoing model but it grows on you with time. Chrome has been used in good amount yet not overdone and the City does end up looking the part especially in ‘Golden Brown’ metallic shade. We certainly don’t like the colour of our test car, ‘Carnelian Red Pearl’. 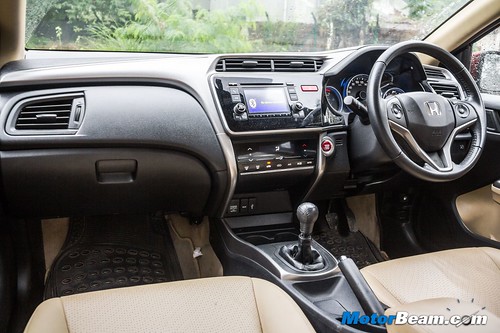 The new dashboard deisgn is a fresh change from the conventional ones adding a cocktail of retro with modern elements. However, the new layout does take some getting used to. The good bits are that there is a rear parking camera with three different views however, it can get tricky due to the lack of sensors. Going only with the camera without any audio sensor does take its time to hone your parking skills amd we strongly believe sensors should have been added to the kitty. The rear bench has everything for those who like to take the backseat with good headroom and more than sufficient legroom. In fact, the legroom is one major factor buyers consider in this segment. The City has the best in the segment (leaving aside the Nissan Sunny and Renault Scala) and the rear AC works very well as we discovered on our drive to Coorg. Coming to the front bench, the comfort levels are pretty much the same, however, tall drivers did complain of upper back pain over long drives. To review this in depth, we took feedback from about 50 City owners and came to the conclusion that occupants who are less than 5’11” in height did not complain of any such thing. About 50% people above 5’11” did complain of upper back ache. Though cushioning is pretty good, some part of the upper back remains unsupported for tall passengers owing to the headrest being a little further back than it should have been. 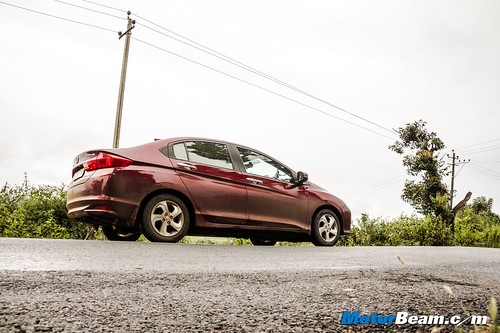 The interiors are well put together but the gloss finish around the touch screen unit is prone to fingerprints. Boot space is generous and we did manage to pack everything on our trip to Bangalore with ease. High speed stability is decent but crosswinds do tend to affect the car, while the i-DTEC motor also gets quite vocal. Even at idle, the engine is quite noisy and we reckon Honda will soon improve the NVH levels as they have done with the Mobilio and Amaze. Power is sufficient and even with a boot full of luggage and four adults on board, the City sped along effortlessly. However, under loaded conditions, it did end up scraping a few speed-breakers but with just 2-3 people, it stays clear of most. 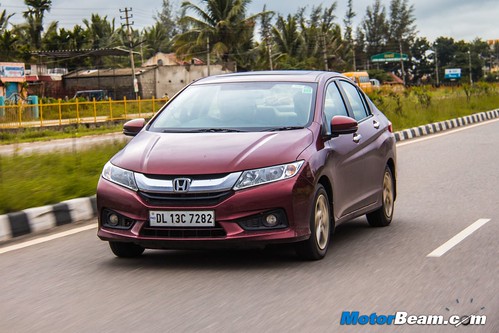 The 6-speed gearbox is made for both city and highway runs but isn’t slick shifting. Well spaced out ratios and a tall sixth gear makes highway cruising a piece of cake. The good thing is that unlike the Amaze and Mobilio, Honda has not electronically restricted the top speed of the City to 140 km/hr. The rationale for that being that fuel efficiency considerably drops post 140 km/hr and we figured that out on our long highway drive on the NH4. Surprisingly, the City was quite consistent with the mileage in city conditions and a sedate highway run to Nashik (top speed of 120 km/hr) returned the best fuel efficiency of 19.11 km/l. 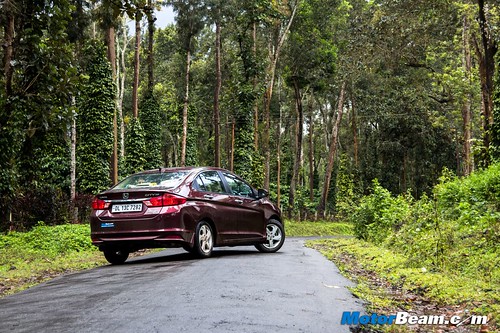 However, things were a little different on our run to Coorg. Driving continuously at triple digit speeds led to a highway fuel efficiency of only 14.36 km/l which goes to show why the City’s siblings have been electronically limited to 140 km/hr. In city conditions, we got around 15.50 km/l with the worst mileage being 13.22 km/l. The i-DTEC, if driven with a light foot can return some impressive fuel efficiency figures. These numbers are way off the ARAI certified mileage which has seriously become a joke. Leave alone the City, none on the cars return anything close to what ARAI certifies in apparently ‘ideal test conditions’ and is purely misleading to the end user. 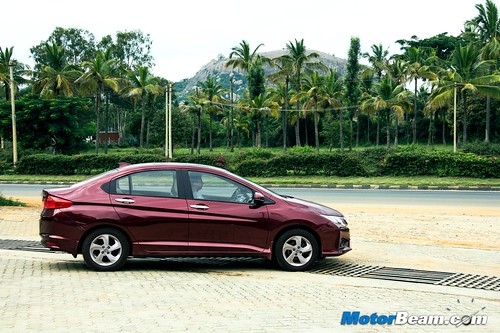 On the ride front, things are quite well balanced and though the suspension is a tad stiffer, it helps with the additional weight the diesel engine carries over the petrol one. With more than 18,000 kms on the odometer, the suspension had settled in nicely, the only complain being some suspension noise which creeped in from the rear suspension occasionally, more so on broken undulated tarmac. Handling is pretty neutral but the steering could do with more feedback. The chassis can take more but it is the tyres which give up on grip rather quickly. In our last report, our tyres were way past their optimum and the car was prone to sliding under braking (even with ABS), however Honda was happy to swap the old tyres for a brand new set of stock MRF rubber. Grip levels did improve after the change but the stock tyres do wear faster than expected. Besides we strongly feel that the 175 section tyres are too small for the job, in fact most of the City’s competitors get much wider rubber. Other than that, the brakes do a fine job and there is nothing to complain. 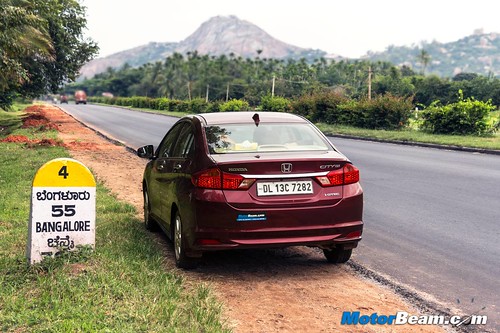 On the other hand, our top end variant was equipped with an electronic sunroof, something we really loved. Not only does it enhance the interior roominess with its light effect, it was a charm to drive with the sunroof open in the all-year pleasant Bangalore weather. In fact, the Honda City is the only car in the segment which comes equipped with a sunroof. Honda service is well known for its quality all over the country. Honda has more than 300 touchpoints across the country and general service experience has usually been rated good. We had sent our car for second service with an additional brake pad change. The entire costing of the exercise came to Rs. 8111/-. Moreover, the cost of routine servicing for the diesel city per one lakh km comes to around Rs. 56,355/- which is about Rs. 0.56 per km and is quite reasonable.

– The above rates are inclusive of tax for Delhi, labour charges may apply. 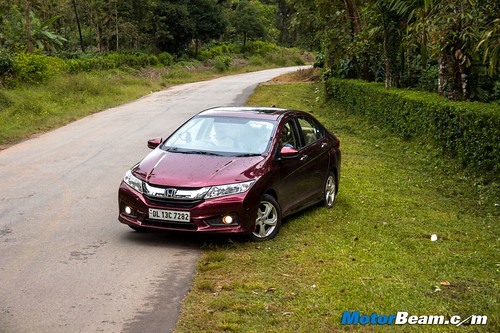 Honda has somehow managed to pack in so much interior space, it’s unbelievable

The Honda City has a lot to offer to the typical sedan buyer. Where it really excels is the fact that it scores well in each and every department, be it interior space, comfort, performance, fuel efficiency and after sales service. All these points put together make the Honda City really stand out in the C-segment. Plus the option of a sunroof and push button start (no button needs to be pressed to unlock the car as there are sensors behind the door handle) add to the geek value of the car. The major niggle may be the NVH levels. Honda has ensured that the City legacy continues with the fourth generation model, add to that the merits of the car and there is a winner out there. In fact, our very own assistant editor has picked the Honda City for himself and he is one happy guy but like we said in our first review of the car, if you are buying a City, it has to be powered by the i-VTEC petrol engine and our team mate did the same.

The Honda City may not be the segment topper in each department but it certainly is the jack of all trades, doing well where it counts and it’s no surprise that this Honda has set the sales chart on fire in the C-segment sedan sphere. 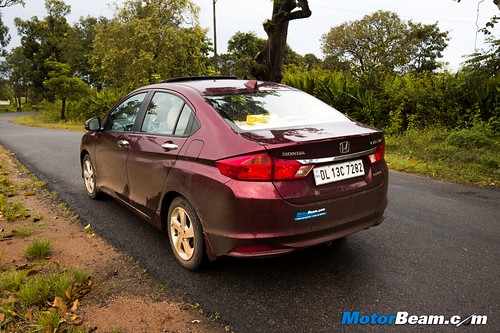 A good all-rounder, the latest Honda City isn’t a driver’s car like its predecessors

* High brand recall and fan following mean resale value will be top of the class
* Interior space, packs in as much rear seat space as a Nissan Sunny without its large footprint
* Punchy diesel engine makes city driving a breeze, good enough punch on the highways too
* Balanced driving dynamics, walks the fine line between good handling and a pliant ride
* Light controls along with a light steering makes it a breeze to drive in town
* Generous equipment levels, first in the segment sunroof a nice touch
* After sales support, Honda offers good service along with quick support

* NVH levels which are the worst in the segment, Honda claims newer cars have reduced NVH
* Stock tyres wear quickly with low grip levels, all generations of the City have run on 175 mm tyres
* Occasional suspension noise, bad roads can really irritate passengers in the City
* Low ground clearance means full load will result in the underbelly almost always scraping
* Quality levels not what used to be on the City, Honda has cut corners
* Gearbox isn’t smooth shifting, something not expected from a Japanese transmission
* Lacks the build quality of some of its rivals, some rattling was evident in our test car