In the past 13 months, Kawasaki has launched four street-fighter motorcycles in the country, two being fully imported while the other two being locally assembled. The Japanese automaker’s product line-up has grown big time, it has ten products on offer in India although nothing is in the mass market. The latest launch is the ER-6n, a bike which needs little introduction because we all are well aware of the ER-6f, the other name for the Ninja 650. The ER-6f and ER-6n are similar bikes as the latter is the naked version of the Ninja 650. The Kawasaki ER-6n is without doubt the most value for money performance bike in our country today but does this Kwacker excite as much?

Motor Quest: The Ninja 650 and ER-6n were launched in 2006 and got updated twice, in 2009 and 2012. Kawasaki has used the same platform to spawn an adventure version in the form of the Versys 650 and a cruiser called the Vulcan S. This is the fourth Kawasaki bike to be locally assembled in India. 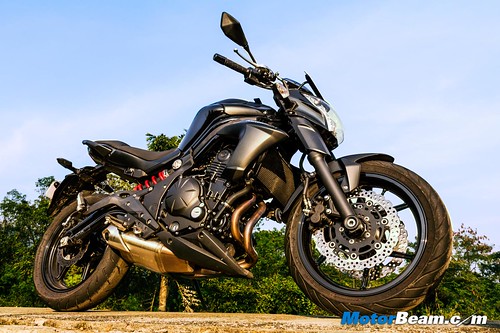 Except the front and lack of fairing, other parts are identical to the Ninja 650

Styling – The Kawasaki ER-6n is based on the Ninja 650 and thus it has familiar design elements. The styling at the side and rear is almost identical to its faired sibling, of course it exposes its engine and has a different front-end. It is here where we are a bit disappointed. After the arrival of Kawasaki’s aggressive looking Z800 and Z250, the headlight of the ER-6n looks a bit too tame in comparison. A single headlight unit at the front doesn’t signal the performance cred on offer like how the wide unit on the Z series of naked street-fighters do. All Kawasaki bikes have daytime running lights and so does the ER-6n. 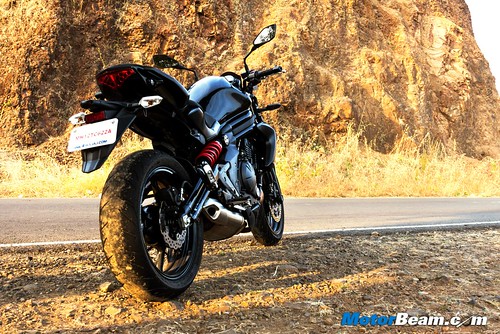 The rear-end is simple yet elegant, the Kawasaki ER-6n gets a red monoshock

Although the front doesn’t come across as aggressive, the Kawasaki ER-6n still looks macho. In comparison to the Ninja 650, the ER-6n has a red coloured monoshock and a single tone paint job, the only colour being offered is black at the moment. The attention to detail is impressive on the side and rear with the bike getting an underbelly exhaust unit and LED tail lights. The charm of the bike is its old school design which isn’t overly done yet signals naked aggression with a whole load of attitude. Still, design elements from the Z would transform this as the best looking street-fighter in its class. 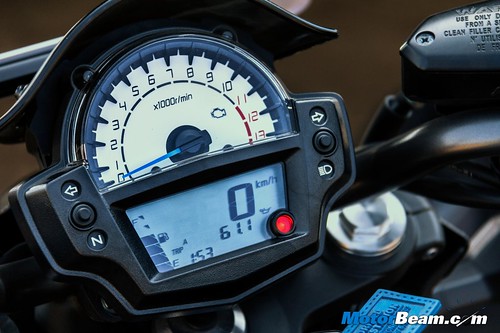 Instrument Cluster and Switchgear – The console on the ER-6n is similar to the Ninja 650 but not identical. While both are analogue-digital units, the ER-6n doesn’t get the same buttons to operate the display, the buttons are hard instead. The ER-6n also gets the low fuel warning and shift light placed on the below right of the cluster while the Ninja 650 has it on the top right. The analogue tachometer takes centre stage and gets a white background, blue needle and different fonts compared to the Ninja 650 which gets a black background and a white needle. The positioning of the tell-tale lights are different too but that said, the console is easy to read on the move and carries vital information including a clock and a range function but gear indicator is missing. Switchgear quality is top notch and the bike gets adjustable levers. 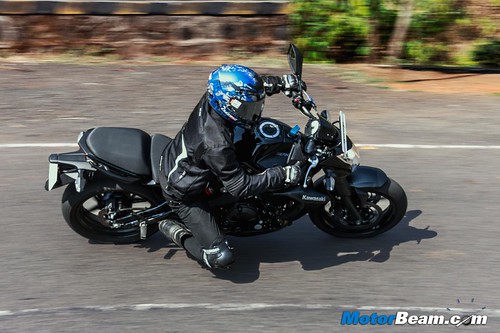 The ER-6n has a sporty yet comfortable riding position, inspiring you to push hard

Ergonomics – The Kawasaki ER-6n is a comfortable bike to ride and is suited to people on the taller side. The riding position is a bit sporty compared to the Ninja 650 but still the rider will find comfort. The handlebar is placed closer to the rider when compared to the faired model which results in a bit of lean forward riding. The handlebar is narrow which makes it easy to pilot this machine while the pegs are a bit high set. With extremely well cushioned split seats, the ER-6n is comfortable for both the rider and pillion, the latter getting split grab rails. There are also bungee hooks if you want to tie your baggage and go exploring. 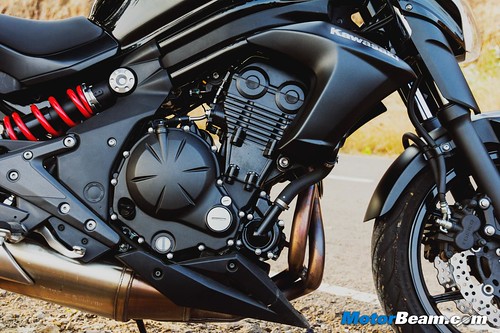 The 649cc, parallel-twin is butter smooth and has ample amount of low-end punch

Performance – Power comes in from a 649cc parallel-twin unit which outputs 72.1 PS and 64 Nm, identical to the Ninja 650 but the ER-6n weighs 7 kgs less and that’s not something which is very apparent when you ride both bikes back to back. Performance is sprightly and the motor is tractable right from the word go. The refinement levels are excellent and this twin-cylinder powerplant loves the redline, in spite of being more at home in the mid-range. Redline comes in at 11,000 RPM and that reveals that this engine has been in business since quite sometime now because the latest Kawasaki’s only have their rev-limiter kicking it at 13,000 RPM. 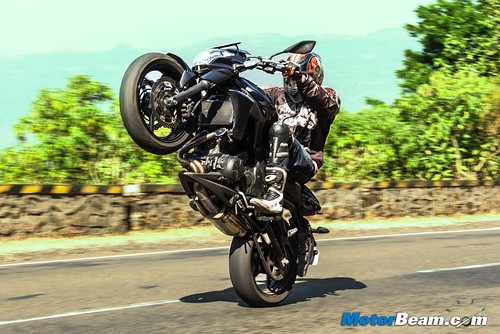 That said, the old school engine has its advantages because the old school character is quite loveable. First is the way this motorcycle sounds, it’s one of the best sounding stock twin-cylinder bikes right now, rumbling along and making a mechanical orchestra when you give it the beans. 100 km/hr takes under 4.5 seconds while top speed is close to 210 km/hr, the ER-6n needing good wind conditions to punch its way forward at the higher end of triple digit speeds. This Kwacker is at home in the city and one can amble around town in third gear too, there is no knocking whatsoever. 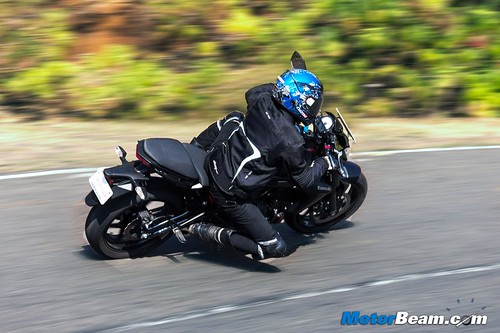 If you want to make good progress than the mid-range is where the Kawasaki ER-6n feels the best because it has a lot of punch post 5000 RPM. First gear is good enough for 85 km/hr while second will take you to 120 km/hr, third helping you whizz past 150 km/hr. The gearbox is a smooth shifting unit and the clutch is well weighed too. In spite of riding in crawling traffic, there was no issue of heating. Riding on the highway is an excellent experience because an overtake just needs you to twist your right wrist and the momentum is picked up instantly. A mileage of 20-25 km/l is what the Kawasaki ER-6n returns, coupled with a 16-litre fuel tank results in a decent tank range. 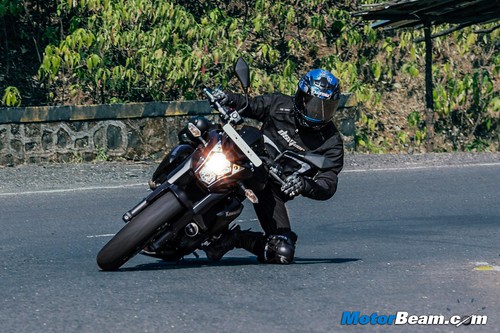 Riding Dynamics – The Kawasaki ER-6n carries a good balance between ride and handling. Like all other bikes from the company’s stable, ride quality is good and the bike does well to absorb the bumps on the road, giving immense confidence to ride fast over them without getting unsettled. It’s not extremely cushioning but definitely compliant. With all that weight, the ER-6n is very stable at speed but wind-blast is an issue when you hit high speeds as naturally there is no wind protection. 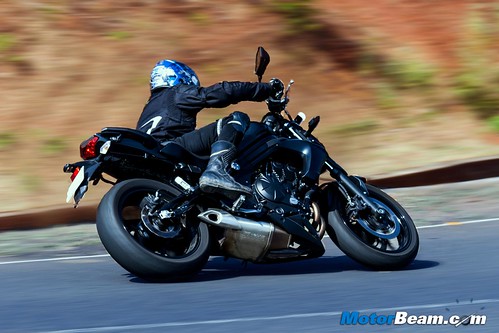 Ride quality is good and so is the stability but ABS has been missed, again

One doesn’t feel all that weight as the motorcycle is well tuned to handle the twisties. While it’s far from being a track tool, it is eager to dive into corners with confidence, thanks to optimum weight distribution. The handlebar is quick to respond and provides good feedback as to what’s happening. The weight also plays a positive part in taking sweepers at good pace, inspiring immense confidence to ride fast. There is ample ground clearance so one need not worry about scraping anything. The Dunlop tyres offer good grip but had taken some beating on our tester. Braking performance is good, the rear could do with more power while the lack of ABS continues to be a downer. 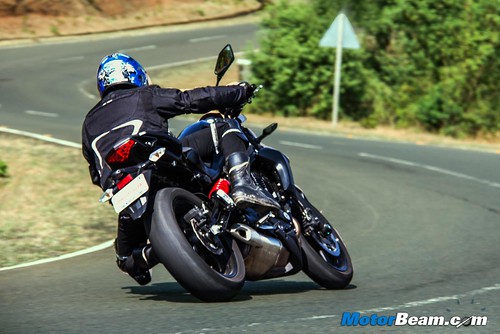 Straight or twisties, the street-fighter Kawasaki ER-6n loves them both

Verdict – The Kawasaki ER-6n is quite impressive a motorcycle and that’s largely because it has an old school charm attached to it. Without doubt, the motor is the standout point of the package, it has so much all-round punch and is at home in every kind of environment. What really works in the ER-6n’s favour is its price tag, costing Rs. 50,000/- less than the full faired Ninja 650, this Kwacker is without doubt a whole lot of motorcycle for your money. It’s also worth the extra dough over the overpriced Ninja 300 because for the added amount you get significant value.

Kawasaki’s ER-6n is an excellent motorcycle for those riders who are climbing the displacement ladder. It’s an easy bike to ride and live with and has enough punch to keep you interested. 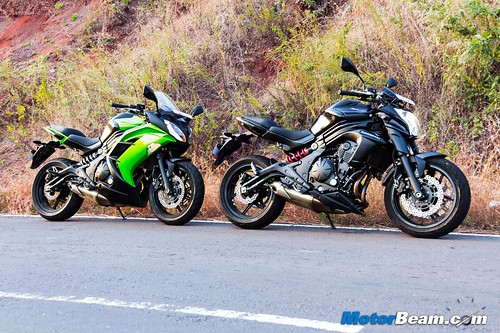 * Front headlight not as aggressive as Z siblings
* Still no ABS 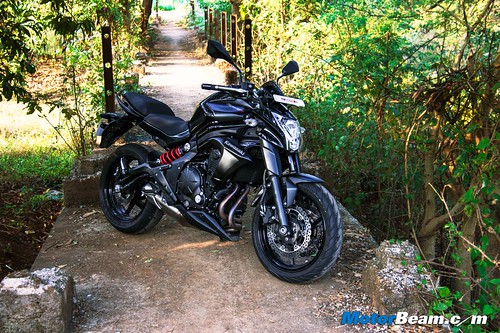 Kawasaki ER-6n Discount Makes It As Cheap As Ninja 300